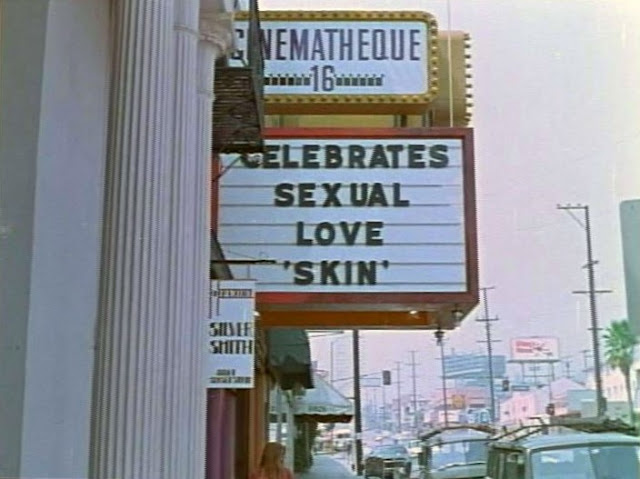 This image of the theatre once appeared on the Mid Century Modern Facebook page and is a screenshot from Nick Millard's 1969 film "L'amour de Femme." Our anonymous correspondent who identified the shot as being from the film noted: "That's model/actress Cathy Adams aka Carol Appleby at the bottom." Ken McIntyre notes that "Skin," the title on the marquee, was advertised in the L.A. Times in July 1969.
Opened: "L.A.'s First Underground Theatre" opened in the early 60s as a storefront 16mm operation running "nudie-cuties." The theatre was also known as the Cinematheque 16 Moviehouse. The location was across the street from Tower Records.
Producer and exhibitor Robert Lippert took it over in 1964 with the idea of continuing to run softcore product but the invasion of the counterculture on this part of Sunset made that venture unprofitable. With the success of the Cinema Theatre in running underground and experimental films, Lippert took that programming route instead, along with some foreign and American classics.

Theatre historian Kurt Wahlner comments:
"I remember seeing 'Alexander Nevsky' there once upon a time. The thing was between the two buildings. There was a staircase leading down and around to the back of the building on the left. You went in and there must have been some sort of lobby, but I don’t recall it. The screen was on the wall to you right as you entered, so you were looking at the seats with the booth on the far wall. The print of 'Nevsky' was one of the worst I have ever seen (or heard). I think I left in the middle someplace."

The theatre hit its stride with "Psychedelic Film Trips" featuring work by Stan Brakhage, Ed Emshwiller, Stanton Kaye, John and James Whitney and others. Frank Woods later bought the operation and opened other Cinematheque 16s in Pasadena (a quick failure) and San Francisco. 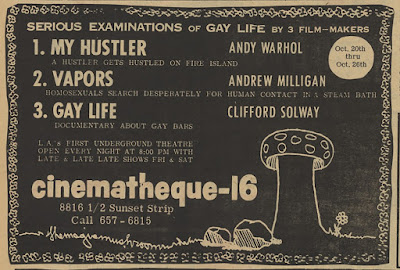 An October 1966 ad for the Cinematheque. The ad is reproduced with a series of Roger Delfont articles archived on the site Ad Sausage that analyze the film ads that appeared in the Los Angeles Free Press. His discussion about the Cinematheque:

"With the success of places such the the 800-seat Cinema Theatre on Western, and its popular 'Underground Cinema 12' program (put on by Michael Getz), L.A.'s underground film culture was gaining ground. In 1964 exploitation film producer Robert Lippard [sic] purchased a theater on the Sunset Strip. The theater only had 16mm capability and Lippard's intent was to screen nudie-cuties. But when the Strip became the destination for the hippie culture, his programming choice proved fruitless.

"The theater ('little more than an anonymous doorway under awning') was taken over by Lewis Teague, an NYU graduate in film studies. Teague offered to run the theater as an art house, and after introducing new weekly programs (European art films), renamed it Cinematheque-16. The art films didn't fare much better than the previous nudies. Initial programming was certainly a mixed bag. In 1966, what was billed as 'A Horror Show', gave a stunned audience the following: 'The Cabinet of Dr. Caligari' (Robert Wiene, 1920), 'Triumph of the Will' (Leni Riefenstahl, 1935), 'Andalusian Dog,' and 'Way to Shadow Garden' (Stan Brakhage, 1954).

"Experimental filmmakers such Shirley Clarke, Jack Smith, Robert Kramer, Gregory J. Markopoulos, Thomas Reichman, Robert Downey and Kenneth Anger had their work shown; Downey's 'Chafed Elbows,' 'No More Excuses' and 'The Sweet Smell of Sex' ('A drama of people who claw their way to the bottom') and Anger's 'Scorpio Rising' all were given ample time at the Sunset cinema. Warhol movies found a home there, and 'Bike Boy' had its West Coast premiere. Doors' front man Jim Morrison premiered his 40-minute 'Feast of Friends,' along with Warhol's 'I, A Man.' This was followed some time later with readings from 'An American Prayer.' The success of Sunset Strip location spurned two more location; San Francisco and Pasadena (which didn't last long)." 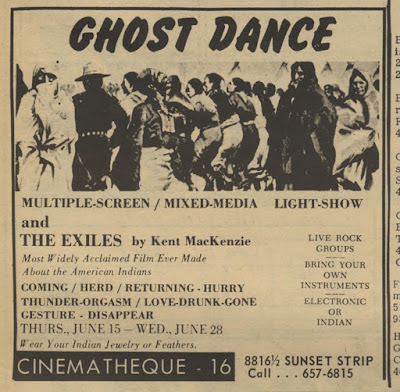 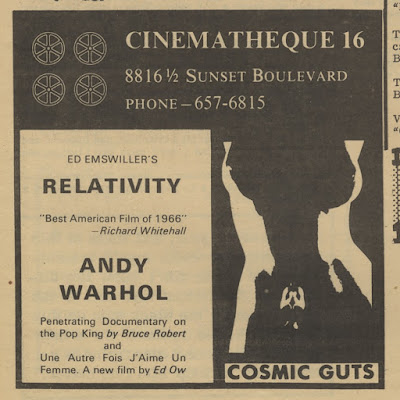 An ad for Warhol's "Bike Boy," an October 1967 release. Thanks to Gerald DeLuca for posting it on Cinema Treasures. 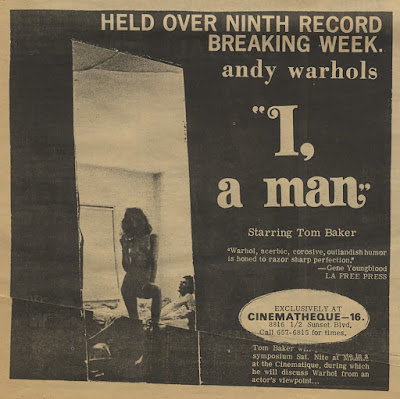 April 1968. All the Free Press ads are from the Roger Delfont pieces collected on Ad Sausage. 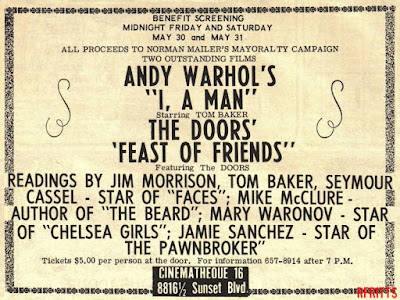 The venue is perhaps best known as the site of May 30 and 31, 1969 fundraisers for Norman Mailer when he was running for mayor of New York. The event featured Jim Morrison reading poetry. Also performing were Tom Baker, Seymour Cassell, Jack Hirshman, Michael C. Ford, Mary Waronov and Jamie Sanchez. The ad appears on a page about the event on the site Mild Equator. 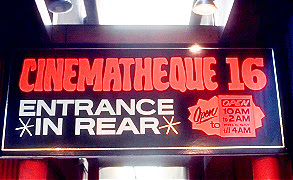 Some of the Cinematheque's signage. Thanks to the site Mild Equator for the image. 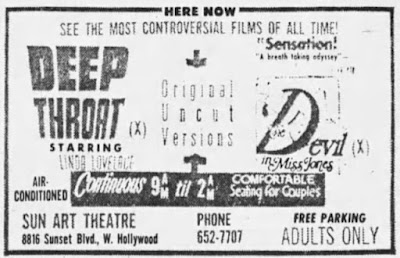 In 1974 the theatre became the Sun Art. Thanks to Mike Rivest for locating this September 26, 1974 ad. "Deep Throat" and "The Devil in Miss Jones" were still running in October 1976. 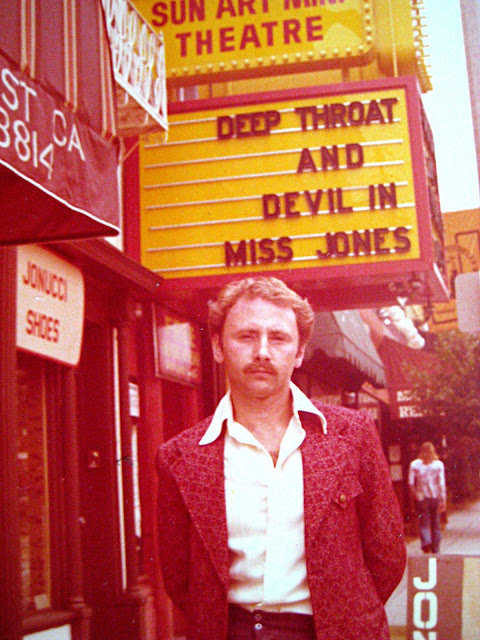 By late 1976 it was hosting live events under Cerny's direction. As their Facebook page says:
"Produced everything from classics to avant garde, from pantomime to the very first punk rock concerts in LA."
The first production was the U.S. premiere of Isak Dinesen/Helena Weltman play "Immortal Story." 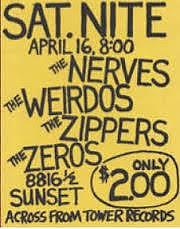 
Pleasant Gehman, in her essay in John Doe's book "Under the Big Black Sun: A Personal History of L.A. Punk," describes the theatre:

"The Orpheum wasn't a regular rock venue, just a small black-box theater that Peter Case [of The Nerves] had somehow managed to rent for this gig, which I believe was the first -- and last -- rock show ever held there. Located just off the Sunset Strip, kitty-corner from Tower Records on the tiny dead-end Nellas Street, the entrance was in the back, and as our car full of crazies arrived, there was already a number of punks congregated in the alley drinking, including Belinda [Carlisle, of the Go-Go's]...."
It may have been the first such show at the Orpheum but it evidently wasn't the last. 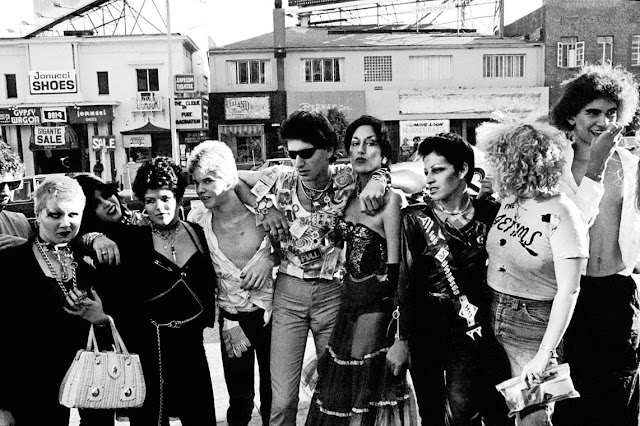 At Tower Records, across the street from the Orpheum in September 1977. It's a photo by Ruby Ray that had appeared on the site Nightflight. Thanks to Noirish Los Angeles contributor Ethereal Reality for posting it on his Noirish post # 46639. In the photo from left to right: unknown, Hellin Killer, Trudi, Pleasant Gehman, Bobby Pin, Nickey Beat, Alice Bag, Delphina, Lorna Doom, Pat Smear, Jena.

Hoss C, in his Noirish post # 46641 notes: "Bobby Pyn (aka Darby Crash), Nicky Beat, Lorna Doom and Pat Smear were all members of the Germs (as shown on Doom's T-shirt). This would've been around the time that the group was formed." The photo can also be seen on the Getty Images site.

A detail from the Ruby Ray photo. On the Orpheum marquee: "The Clique in Pure Imagination." 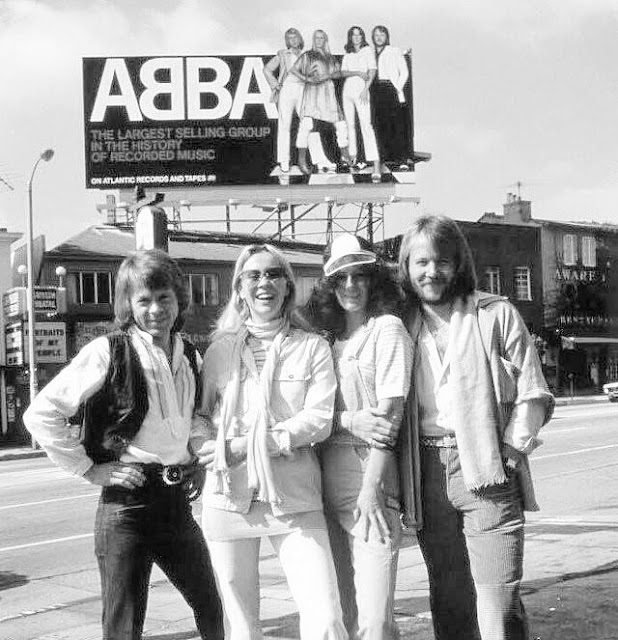 The Orpheum marquee is on the far left in this 1978 shot of Abba at Tower Records. Thanks to the Sunset Blvd. Records Facebook page for sharing it. They credit it to Tom Anderson. And thanks to Craig Owens of Bizarre Los Angeles for spotting the post. The show on the marquee appears to be "Portraits of My Temple." 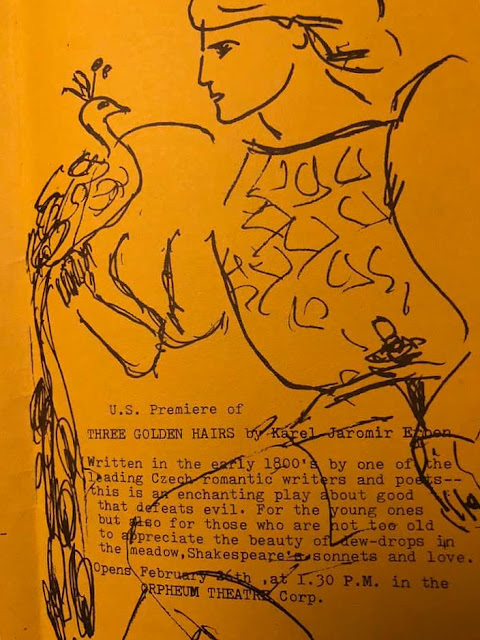 A flyer for "Three Golden Hairs" at the Orpheum. 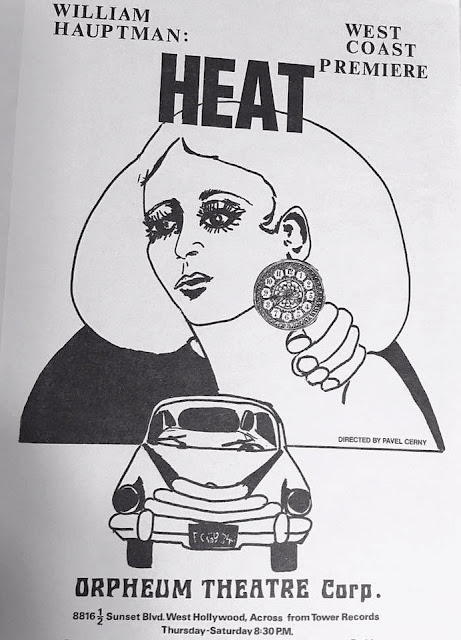 A flyer for the OTC production of "Heat."

Closing: The closing date is unknown. The Orpheum operation then moved to the Callboard Theatre on Melrose.

Status: The building the theatre was in has been demolished with the new IAC Building on the site dating from 1986. West of the theatre location, Book Soup has been in the 8818 spot since the late 80s.

The Cinematheque / Sun Art in the Movies:

The Cinematheque 16 is seen in Nick Millard's 1969 film "L'amour de Femme." That's a screenshot from it at the top of the page. 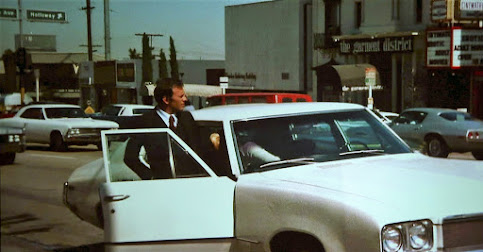 We get a fine tour of Los Angeles in Jacques Deray's "The Outside Man" (United Artists, 1973). Here we're looking east on Sunset with the marquee in the upper right corner of the image. Jean-Louis Trintignant (here getting into his car) and Roy Scheider (in from Detroit) are hit men who soon find out they're working for the same guy, a Los Angeles mobster who wants them both dead. Ann-Margret is the former owner of a sleezy bar who gets caught in the middle. See the Historic L.A. Theatres in Movies post for shots of the Music Box/Pix, and the Vine Theatre from the film. 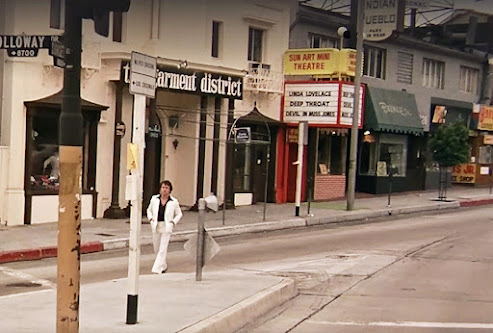 Harvey Keitel strolls Sunset with the Sun Art Mini Theatre in the background. It's a shot an hour and seventeen minutes into "That’s the Way of the World" (United Artists, 1975). Sig Shore directed this drama about the music business that also stars Ed Nelson and Cynthia Bostick. Thanks to Luis Antezana for spotting the theatre in the film. See the Historic L.A. Theatres in Movies post for a second shot from the scene.


Before and after the theatre era: 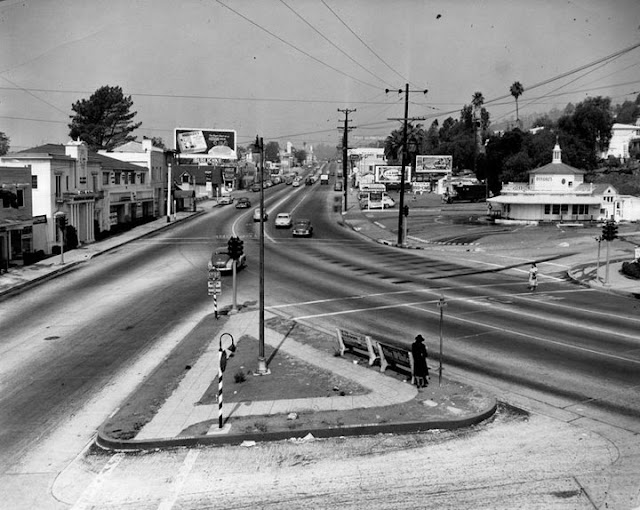 1950s - A view of the intersection at Sunet and Holloway pre-Cinematheque 16. Thanks to Bill Caffrey for posting this on the Facebook page Vintage Los Angeles. The theatre was in the second building on the left, with the columned entrance. The theatre entrance was just beyond the building itself. Book Soup is now in the building beyond that at 8818, which dates from 1935. 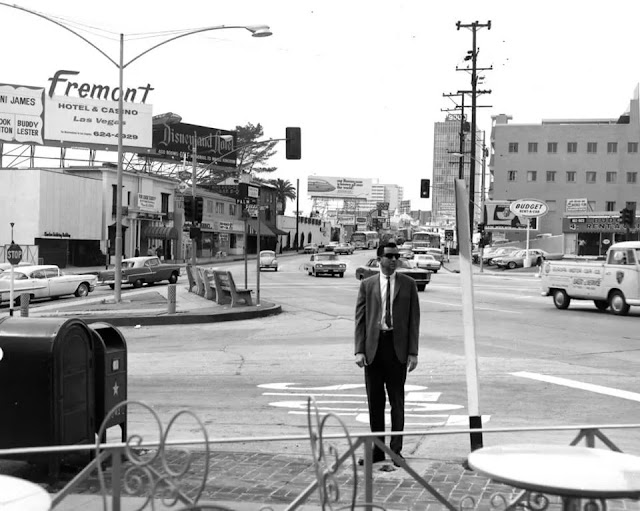 early 1960s - Thanks to Tom Anderson for locating this shot for a post on the Mid Century Modern Facebook page. 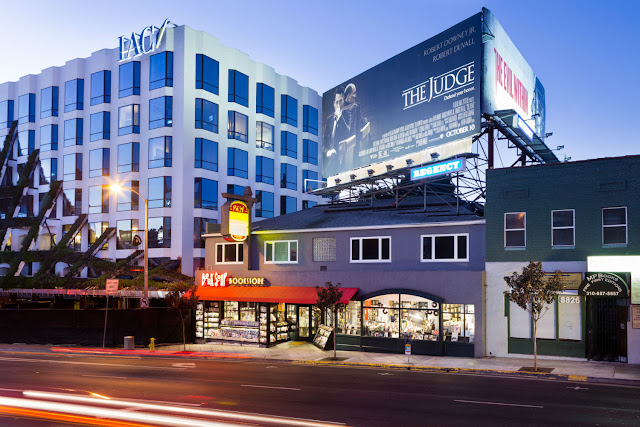 2014 - The building on the left is on the site of the theatre. It's a photo by Russell Gearhart that's on the photo gallery page of the Book Soup website.

2019 - The theatre entrance was once just to the left of the gray Book Soup building. Photo: Google Maps

The Cinematheque 16 is discussed as a home for experimental film on page 225 in David James' 2005 book "Most Typical Avant Garde: History and Geography of Minor Cinemas in Los Angeles." The author is a professor in the school of Cinema-Television at USC. The book is available from the University of California Press or Amazon. A preview is available on Google Books.

Visit the page here on this site about the Cinematheque 16 in Pasadena.