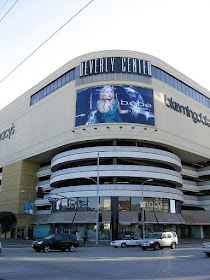 Opened: July 16, 1982 by Cineplex Odeon as a 14 plex with what was at the time the largest number of screens under one roof in the United States. Later three of the small main floor screens were closed. Two new screens were added on the upper level, giving it a total of 13 screens. The mall is located at Beverly Blvd. and La Cienega Blvd. Photo: Bill Counter - 2007

It was an important cog in the LA movie scene with lots of premieres and record runs of major films. But it was a novelty of the time and the small screen sizes and other problems never made it a great moviegoing experience. After Cineplex imploded, many of their theatres went to AMC but they didn't want this one. Mann Theatres tried running it beginning in 2006. They closed it August 6, 2009. Rave then tried operating it.

Its passing was, as Christopher Crouch noted in a June 2010 post on his blog Cinelog, representative of the decline of mall culture in general and the ever changing fortunes of the major players in Los Angeles film exhibition.

It outlasted better complexes like the nearby GCC Beverly Connection and even survived the demise of its builder, Cineplex Odeon. But newer complexes such as the Grove and the ArcLight gave it fatal competition.

The interesting thing about Cineplex Odeon's entrance into the Los Angeles market (and this strategy was also deployed in other cities) is that they seemed in the 80s to be betting both on the past and the future simultaneously. In some areas they would just buy an existing circuit to enter and dominate a market. Frequently they overpaid and, like other circuits, discovered eventually that there wasn't enough revenue to service the mountain of debt.

In L.A., without a major player to take over, the strategy was twofold. They built the multiplexes (Beverly Center, Universal City) that those with vision knew were the future of the business. But Cineplex also also went for the mom and pop operated older singles, twins and triples that would give them first run screens in interesting areas.

In Los Angeles that second strategy played out with theatres like the Gordon/Showcase, the Brentwood Twin and the Fairfax. Sprucing up an older building and making it a first run was easy and quick compared to permitting and building a large project. And, even if many of these older theatres were still doomed economically, it gave them a few more years of life. It all worked for awhile.

More Information: See the Cinema Tour page for 236 photos.  The Cinema Treasures page has lots of discussion about the complex.