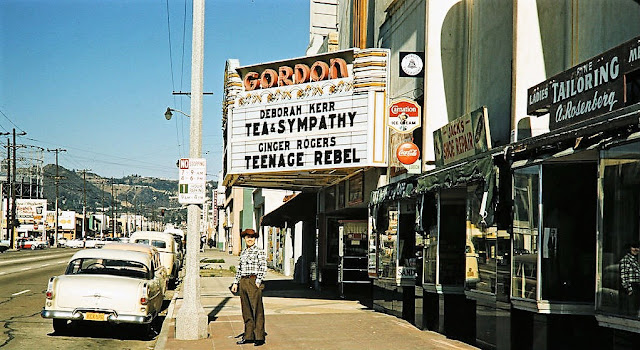 Opened: February 9, 1938 as the Gordon Theatre with Irene Dunne and Cary Grant in "The Awful Truth" plus a sneak preview. It was named for the owner, David Gordon. The location is a block and a half south of Melrose, nine and a half blocks north of Wilshire Blvd.

Thanks to Sean Ault for finding this terrific 1957 photo looking north. The Gordon was running "Tea and Sympathy" along with "Teenage Rebel" featuring Ginger Rogers as the mother of a teenager. Both films were late 1956 releases.
Architects: Clifford A. Balch designed this lovely art deco theatre. The murals and other decor are by Anthony Heinsbergen.

David K. Mesbur of Toronto-based Mesbur + Smith Architects did the sensitive restoration for Cineplex Odeon in 1985. The auditorium murals were uncovered and restored.

A February 9, 1938 grand opening ad, even with a salute to Tony Heinsbergen! Thanks to Mike Rivest for locating this. Visit his site: Movie-Theatre.org

In the 60s and 70s Louis Federici operated the theatre and then it was run by Sid and Chris Kurstin. The Kurstins also had the Fairfax and the Brentwood Twin.

It ran into the mid-80s as the Gordon. Cineplex Odeon acquired the venue and re-opened it in October 1985 as the Cineplex Odeon Showcase after their renovations. Cineplex also ended up with the Fairfax and the Brentwood. 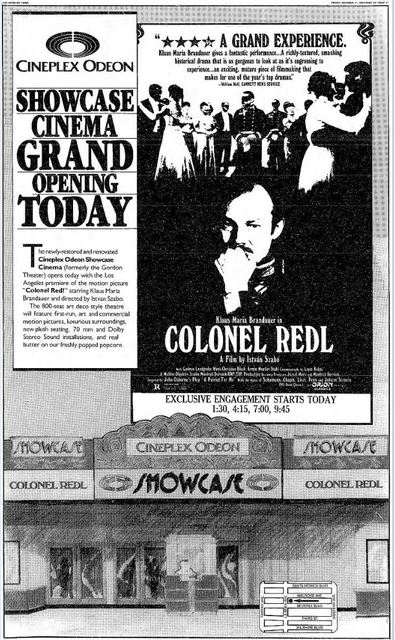 Cineplex jettisoned the property around 1999 when they were headed into bankruptcy. The theatre later ran as an independent and closed in 2008.It was then booked for a while by the Laemmle circuit, closing again in May 2009. Following that closure it was purchased by Regent Entertainment and operated as the Regent Showcase, a venue open only for special events.

Projection: It ended up with a Simplex XL with a Simplex soundhead along with a Christie platter. The house was THX certified at one point. The booth was still equipped in the Regent days. Their website mentioned Ultra Stereo ECI-60 and Dolby CP-200 processors. The screen size is 15' x 32' with a throw of approximately 100'.

Status: It's being used a a church by a black-oriented group called One L.A. The theatre was in the clutches of another religious organization in 2012 and 2013 that was calling it the Arc Theatre. The Arc word was also used to brand it as the Artists Resource Center. They had intended to use the theatre for inspirational stage and film presentations as well as church services. It's unknown whether either of these groups owned the building or if it's just a lease situation.

The Gordon/Showcase in the Movies:

We get a peek at the marquee in Ray Dennis Steckler's "Body Fever" (1969), also known as "Supercool," "Deadlocked" and "The Last Original B Movie." It's a noirish tale about a low-rent private detective trying to catch a robber who dresses like Catwoman.  Thanks to Eitan Alexander for the screenshot. See the Historic L.A. Theatres In Movies post for a look under the marquee.

Joel Murray and Tara Lynn Barr go to the movies in the middle of a cross country killing spree in "God Bless America" (Darko Entertainment, 2012). They're targeting people who lack decency. Or are just plain stupid. Several people in the theatre who are being obnoxious during the film get shot when the pair leaves. See the Historic L.A. Theatres in Movies post for more views of the Showcase as well as shots of the Chinese, Music Box and Alex Theatre from the film.

Near the beginning of Martin McDonagh's "Seven Psychopaths" (CBS Films/Blueprint Pictures, 2012) two of those psychopaths (Colin Farrell and Sam Rockwell) are seen watching a film in the Showcase auditorium.

The Gordon on TV: 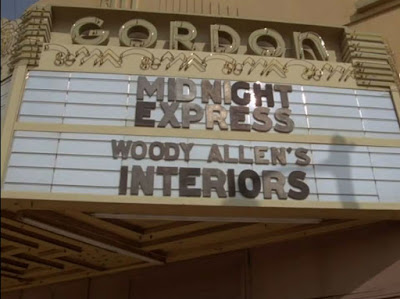 The marquee of the theatre in its Gordon days appears in an episode of "The White Shadow" (1978). Thanks to Walter Santucci, who posted the screenshot on the LAHTF Facebook page.

The Gordon in Music Videos:

The theatre's flashing neon puts in an appearance a little over a minute into The Doors' "L.A. Woman" video, available on YouTube. Thanks to Sean Ault for spotting this one. 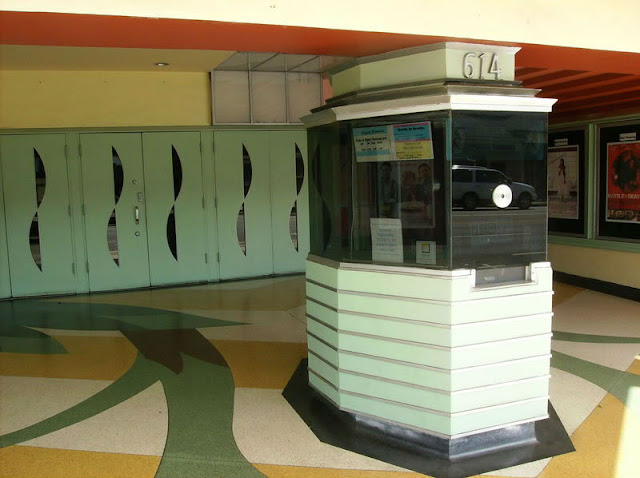 A 2008 photo of the boxoffice and entrance terrazzo from Ken McIntyre. 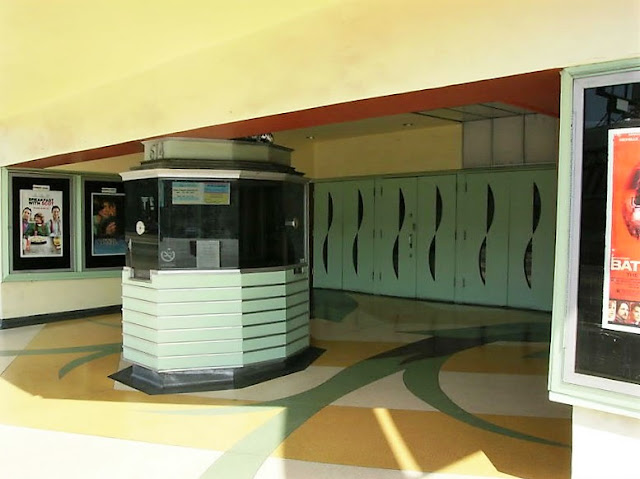 Another Ken McIntyre photo. Thanks, Ken!

The lobby as it appeared in a photo from the theatre's former website when it was the Regent Showcase. The neon is a leftover from the Cineplex Odeon days. 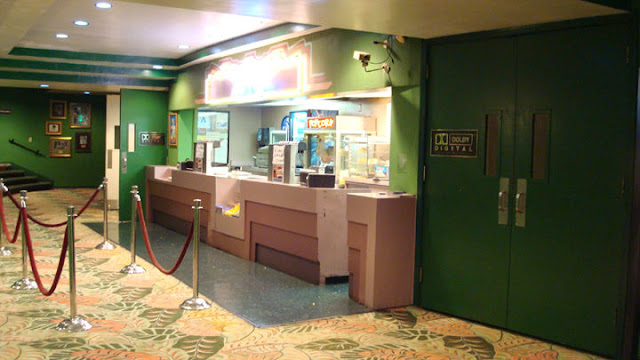 A snackbar view c.2006. Thanks to the site Cinema Sightlines, a project of TJ Edwards and Garan Grey, for the photo. See their Showcase in Hollywood page for more photos as well as a discussion about the theatre. 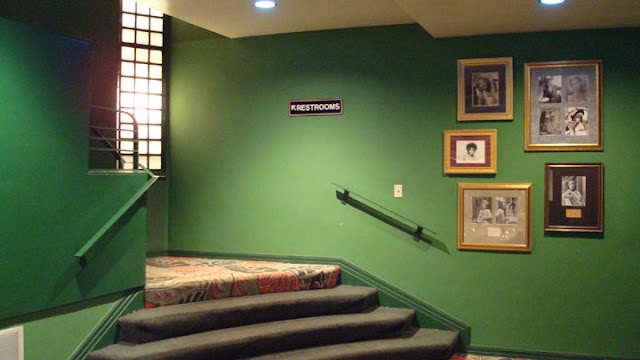 The stairs up to the lounge area. Thanks to TJ Edwards and Garan Grey for the photo, appearing on their Cinema Sightlines page Showcase in Hollywood. 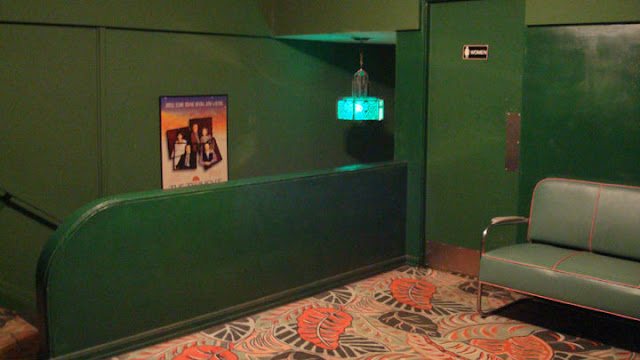 The lounge up at booth level. Thanks to TJ Edwards for the photo. It appears on Cinema Sightlines, the site from Mr. Edwards and Garan Grey. It's on their Showcase in Hollywood page, where there are more views to browse.

One end of the booth at the Showcase. The photo appeared on the website for the theatre when Regent was operating it.

A view down from the booth that was on the theatre's website when it was the Regent Showcase. 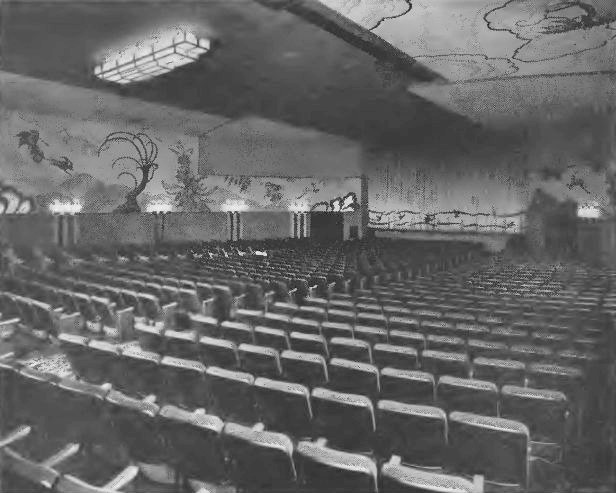 There are several strange things going on in this low-res scan of a 1939 photo. But it's all we have as far as a view of the original painted front curtain that continued the motifs of the sidewall murals. It's unknown what's going on with the left mural near the proscenium. Unfinished perhaps? And what's that mess down front on the right? Mysteries. The image appeared in an ad for International seats in the April 29, 1939 issue of Boxoffice.  "Beauty and Comfort Unsurpassed." 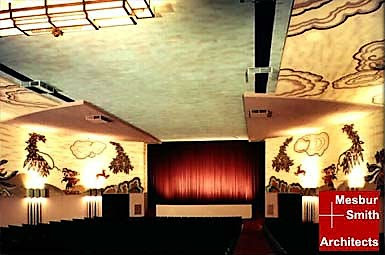 This photo of the front of the auditorium is from Mesbur & Smith Architects, the Toronto-based firm that did the renovation of the theatre in 1985 for Cineplex Odeon. The company specializes in entertainment projects and did a lot of work all over the US and Canada for Cineplex, including work at the Fairfax Theatre. 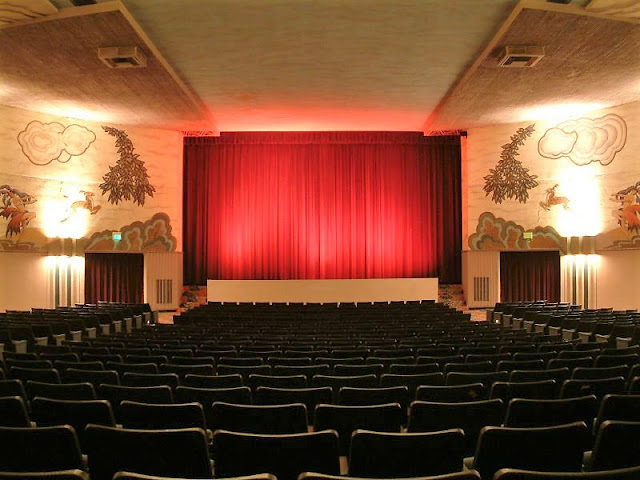 Thanks to Ken Roe on Flickr for this lovely 2002 look toward the screen in the Showcase auditorium. It's part of his immense collection Movie Theatres - USA. 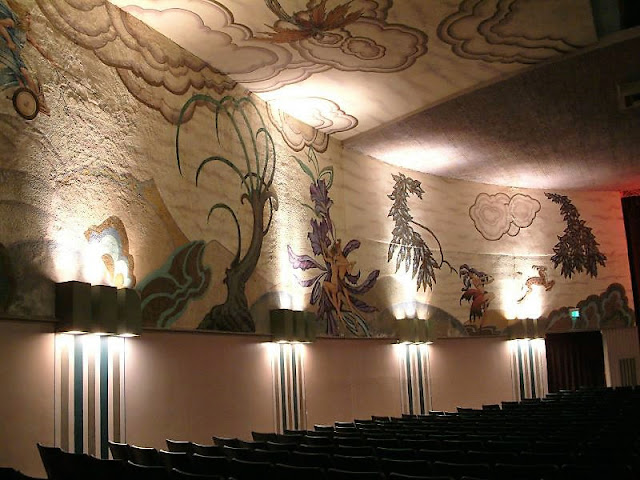 The sidewall of the auditorium. Thanks again to Ken Roe on Flickr. 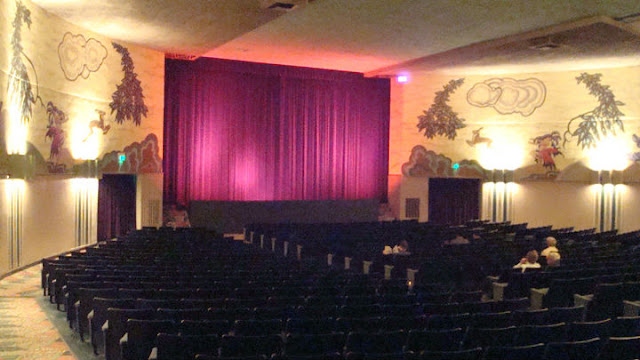 Thanks to TJ Edwards for this c.2006 auditorium photo. It appears on Cinema Sightlines, the site from Mr. Edwards and Garan Grey. It's on their Showcase in Hollywood page, where there are more views to browse. 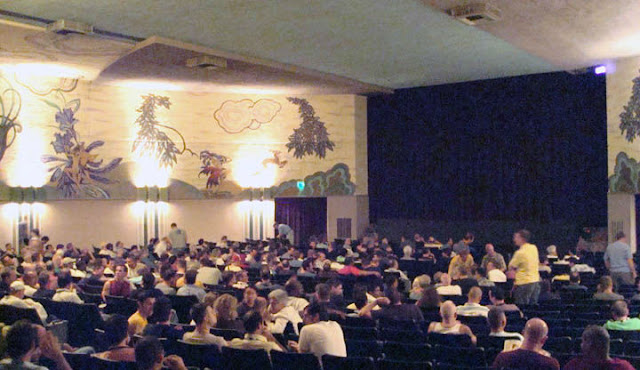 Another c.2006 auditorium view. Thanks to the site Cinema Sightlines, a project of TJ Edwards and Garan Grey, for the photo. See their Showcase in Hollywood page for more photos.

An interior view from the website that was up in 2012 when a church group was calling it the Arc Theatre. 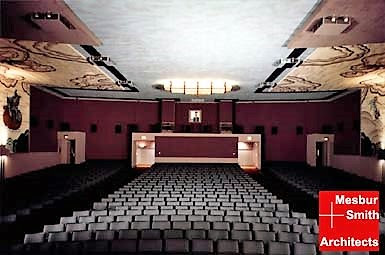 The rear of the auditorium in 1985, a photo from Mesbur & Smith Architects. The rear of the auditorium. It's a 2002 photo by Ken Roe on Flickr. Also see his exterior view. For a real treat, browse the hundreds of great theatre photos in his Flickr album "Movie Theatres USA."

The rear of the house c.2012 from the now vanished Arc Theatre website. 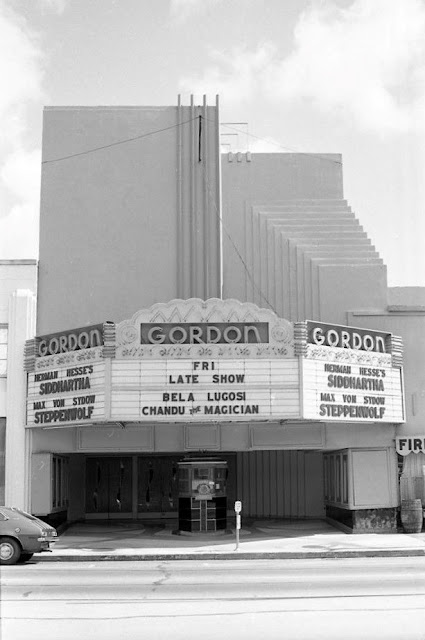 Thanks to Nathan Marsak for his 1970s photo of the theatre, then still called the Gordon. It was a post of his on the Los Angeles Historic Theatre Foundation Facebook page. 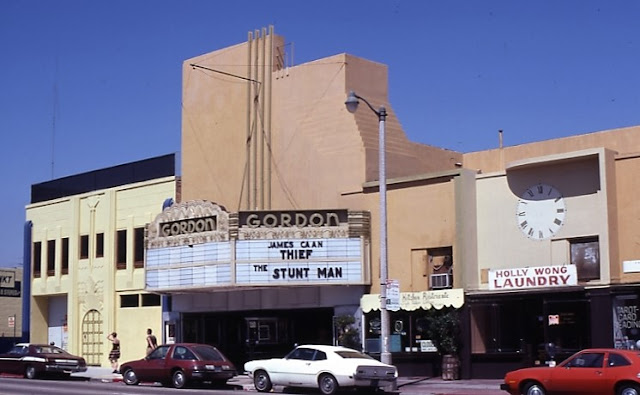 Thanks to the now-vanished American Classic Images website for this 1981 view taken prior to the Cineplex renovation. 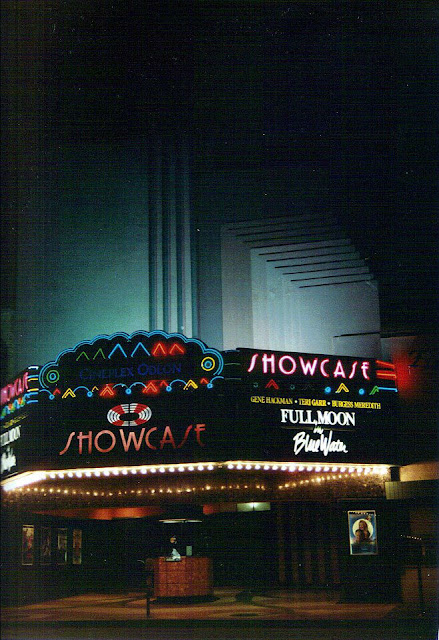 A look at the wonderful neon at the Showcase in 1988, when the theatre was under Cineplex Odeon management. Thanks to Bill Gabel for posting the photo on the Facebook page Photos of Los Angeles. 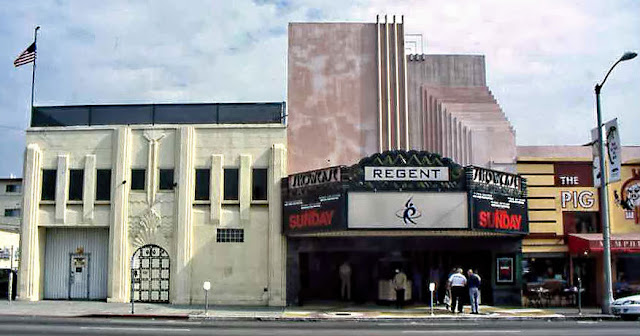 A 2002 facade view of the Showcase by Betty Sword. Take a look at the great deco building to the left of the theatre. The photo is from the Cezar Del Valle Theatre Talks collection. Cezar is a Brooklyn-based theatre historian with a serious interest in Los Angeles Theatres. Thanks, Cezar! 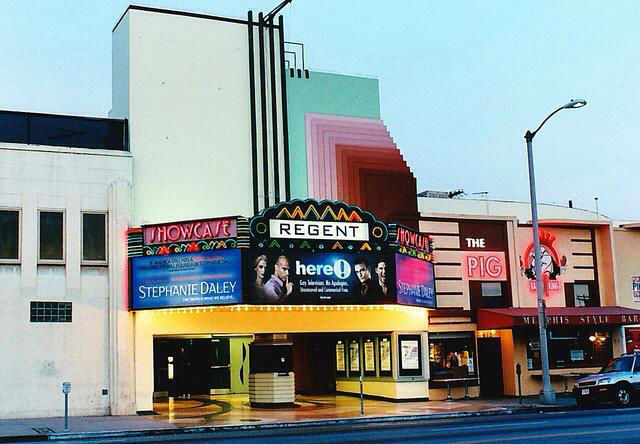 A photo of the facade as the Regent Showcase from Ken McIntyre on Photos of Los Angeles. 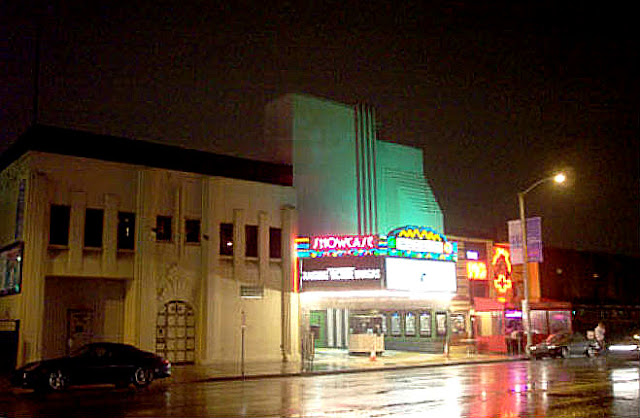 Thanks to Adam Martin for this 2003 photo of the Showcase's neon on Cinema Tour. The site's Showcase Theatre page also has a day view by Mr. Martin as well as interior photos by Ken Roe.

Thanks to the site Cinema Sightlines, a project of TJ Edwards and Garan Grey, for this fine c.2006  view of the Showcase neon.  See their Showcase in Hollywood page for more photos as well as a discussion about the theatre. 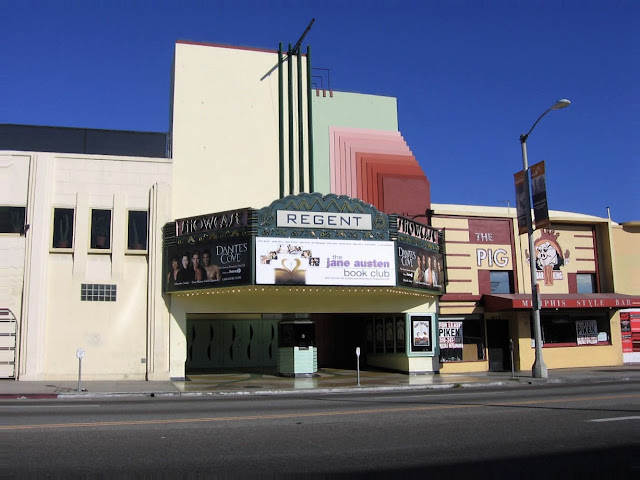 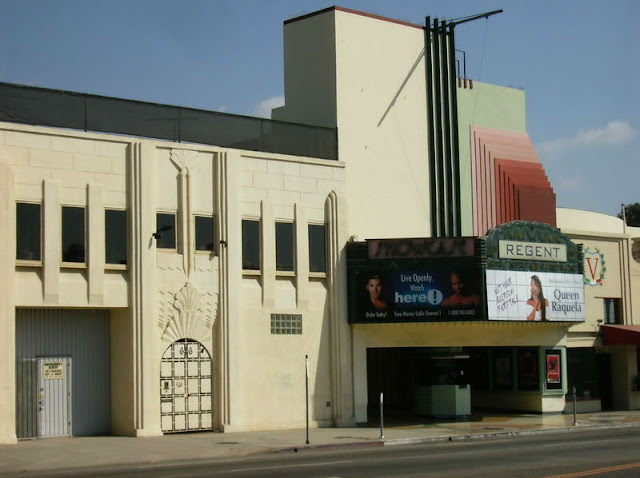 A nice view from 2008. Thanks to Ken McIntyre for sharing his photo. 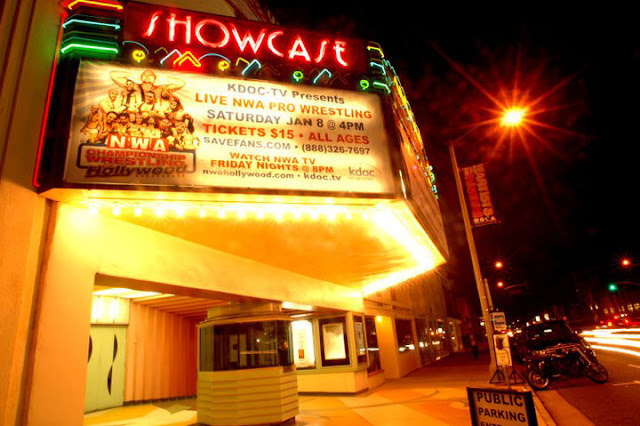 Thanks to Shane Kidder for this 2011 photo. 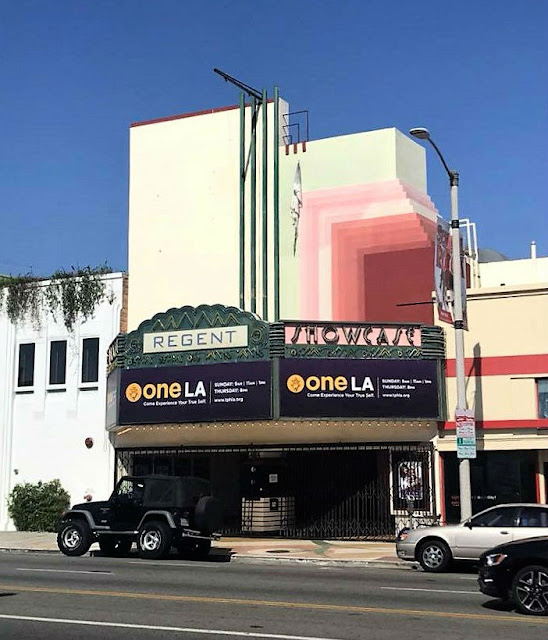 Thanks to Ken McIntyre for this 2018 photo, a post of his on the Photos of Los Angeles Facebook page. 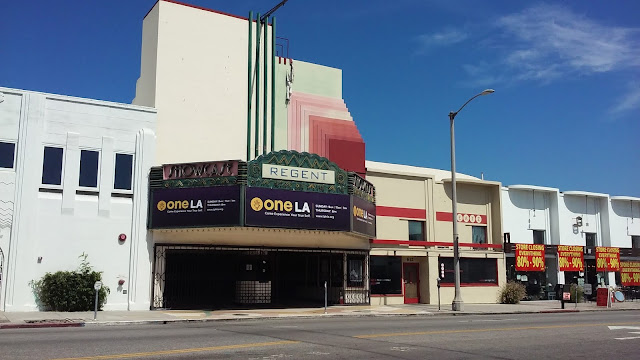 A summer 2019 view. Nothing new except some action in the storefronts at the right. Photo: Bill Counter 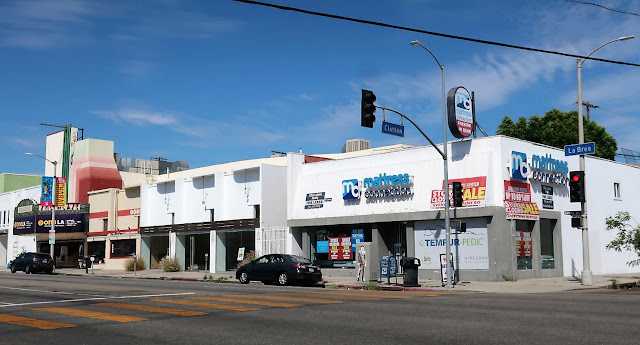 Looking north in September 2019. The three storefronts in the center of the image had been vacated. One LA, the church using the theatre, was moving in. Photo: Bill Counter

The Gordon's marquee makes an appearance 9:53 into John Frizzell's "A History of Neon Signs," a 25 minute film from 1984. Thanks to Michelle Gerdes for spotting it on YouTube.