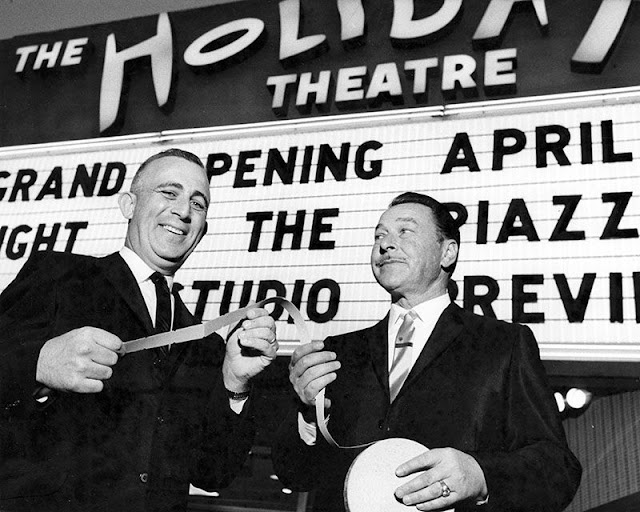 Opened: April 4, 1962 as the Holiday Theatre. "Standing with tickets in hand outside the Valley's newest motion picture theater, The Holiday, in Canoga Park, are owner Jack Grossman, right, and manager Stan Livingston." The theatre was running "The Light in the Piazza" with Olivia DeHaviland and Rosanno Brazzi." It's a George Brich photo that appeared in the Valley Times on April 7, 1962. It's in the Los Angeles Public Library collection.

Architect: William H. Bonham. Thanks to Joe Vogel for the data. 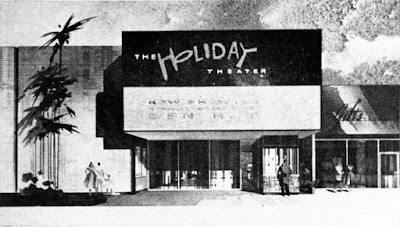 A 1961 sketch from the architect. Thanks to Dallas Movie Theaters for finding the drawing for a post on Cinema Treasures.

Initially it was an independent house owned by Jack Grossman who also had the Magnoloa in Burbank and other sites. Later Century Theatres and Loew's had turns running the theatre. General Cinema took over the Loew's sites in 1972 rebranded this one as the Holiday Cinema. They were the last big chain to run the Holiday. After General Cinema left it became a bargain house. Bill Gabel comments:

"Those dollar theatres are a true thing of the past. The people that ran the Holiday also ran the Criterion in Santa Monica, Meralta in Culver City and the great Warner Beverly Hills theatres as dollar houses. They would pick up theatres that were sitting dead by their former chains. In those days you could still make some money from those theatres in second or third run. They started out with the Criterion and Meralta theatres with double-features and priced at .49 cents for all seats. When they reopened the Warner Beverly Hills Theatre it was priced at one dollar & then $1.50 a seat. I remember going to the Criterion many times and seeing full houses on the weekends. The Criterion Theatre was a real money maker during this time. There were only a few dead theatres left in the Los Angeles areas that really worked."

The Holiday ended its theatrical life as a Spanish language venue.

Status: The building was converted to retail use after closing as a theatre. It's now a multi-tenant space with a second floor inserted. In 2018 the former lobby space was a storefront church. 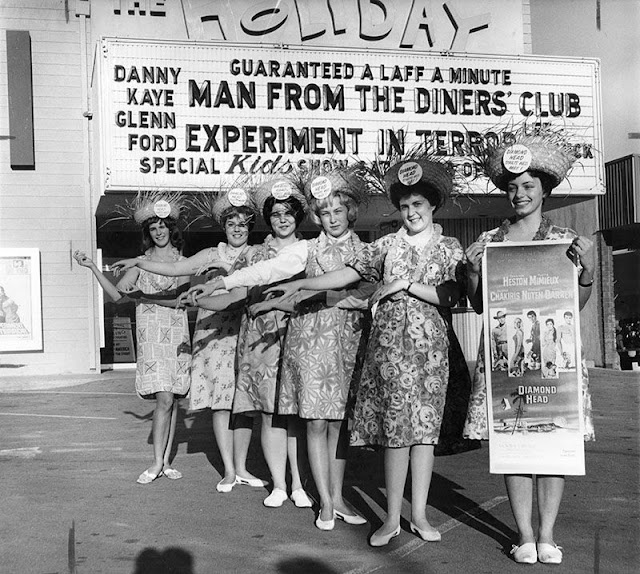 "The usherettes at Canoga Park's Holiday Theater are all dolled up in muu muus today for the opening of 'Diamond Head,' the drama of modern-day plantation life in Hawaii." It's a May 1963 Valley Times photo by Bob Martin that's in the Los Angeles Public Library collection. 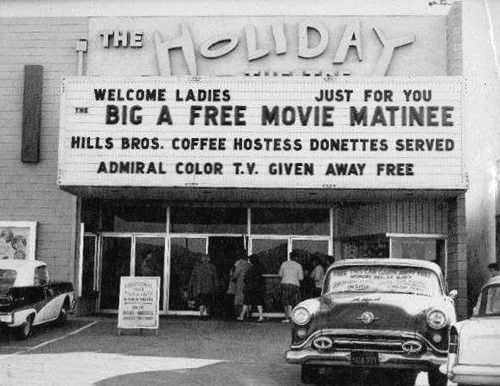 A ladies matinee. The sign in the windshield of the car on the right says they'll be giving it away. Thanks to Bill Gabel for finding the photo for a post on Cinema Treasures. 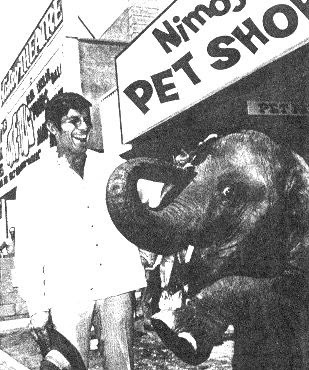 Leonard Nimoy once operated a pet store next to the theatre. Thanks to Deanna Bayless for finding this c.1968 photo on a San Fernando Valley Blog post about the store. They credit the image to the German blog Leonard Nimoy. The Holiday was running "The Love Bug." 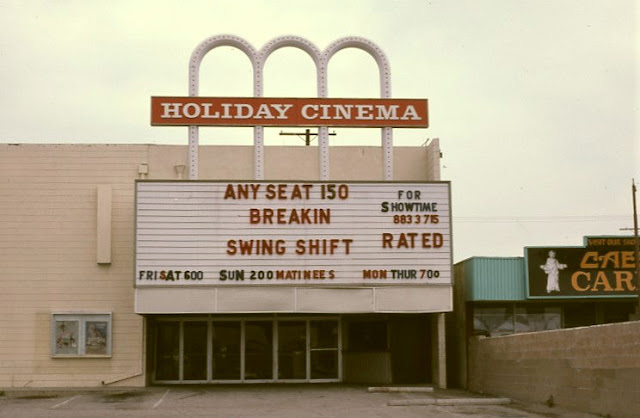 Thanks to the American Classic Images collection for this 1984 photo.

The repurposed building. The theatre entrance was on the right, a storefront currently using the 8372 address. Photo: Google Maps - 2018

More information: Thanks to Deanna Bayless for the research on the history of the building, including determining the correct address.

Cinema Treasures has a page on the Holiday with some interesting comments but, at last look, the wrong address. There's a page about the building on the site Property Shark.