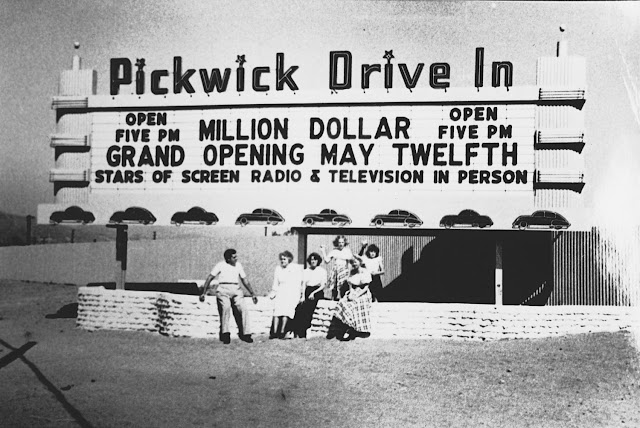 Opened: May 12, 1949 with "Red Stallion in the Rockies" with Arthur Franz and "The Lucky Stiff" with Dorothy Lamour and Brian Donlevy. The photo is from the collection of the late Malcolm C. Keele. Thanks to Paul Rayton for making it available. See eleven construction photos from the Keele collection lower on the page.

Ron Strong, on his Bijou Memories page about the Pickwick, notes that nine year old star Natalie Wood made an appearance at the opening to sign autographs. It was on the southwest corner of Alameda and Main. Adjacent to the theatre was the Pickwick Recreation Center which included a pool, bowling alley, ice rink, stables, and other amenities. The Pickwick was initially operated by Cal-Pac Drive-In Theatres and later by Pacific Theatres. 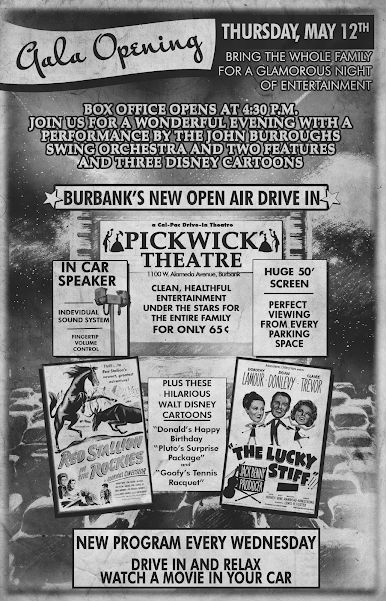 An opening ad. Thanks to Wes Clark's Burbankia for including it in a Pickwick Recreation Center album. Of course the theatre had a playground and picnic area in front of the screen. Ron Strong notes that in the early 50s the Pickwick played a number of 3-D titles including "It Came From Outer Space" and "Fort Ti." 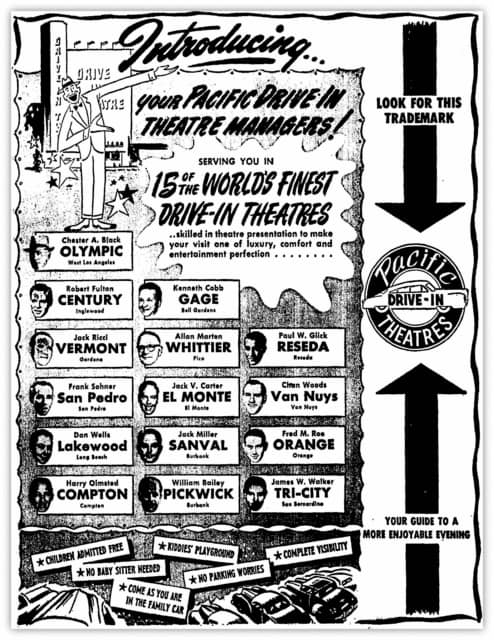 A 1951 Pacific Theatres ad from a Cinema Treasures page. An ad for the theatre's best known event, the February 6, 1974 horse preview of Mel Brooks' "Blazing Saddles." Thanks to Mike Rivest for locating the ad.


Status: It was demolished in October 1989. There's now a Pavilions market and a Staples store on the site. 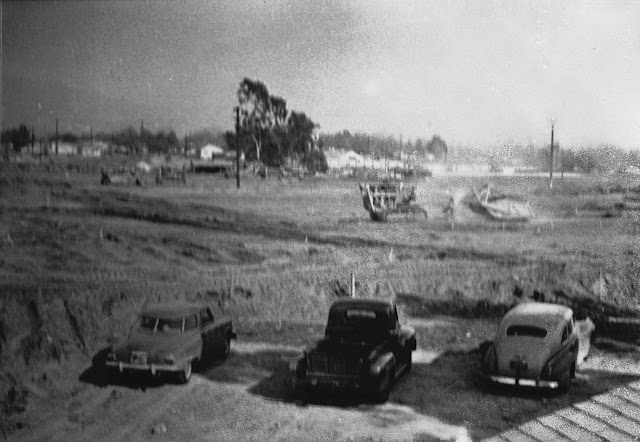 1949 - Grading the site. This is one of twelve photos from the collection of the late Malcolm C. Keele. Thanks to Paul Rayton for making them available. He comments:
"I can't recall exactly whether he was a 'financial' investor in the place, in the beginning, but he said he 'built' the place, and in fact there's one photo of him, working there at the site. I worked with him for many years in projection, and was quite friendly with him and his family. He was born in 1910 and died in November 1996; one of his daughters still lives in their original home in Studio City.
"Malcolm was quite a character -- he drove out to California with his family about 1926, well before there was much in the way of highways, and he had tales to tell about that trip, for one thing. He worked in various theaters in DTLA and, later, Hollywood and Century City. I first met him in early 1975, when Filmex moved from Hollywood to Century City, and operated in what at the time was called the Plitt Century City Cinema twin." 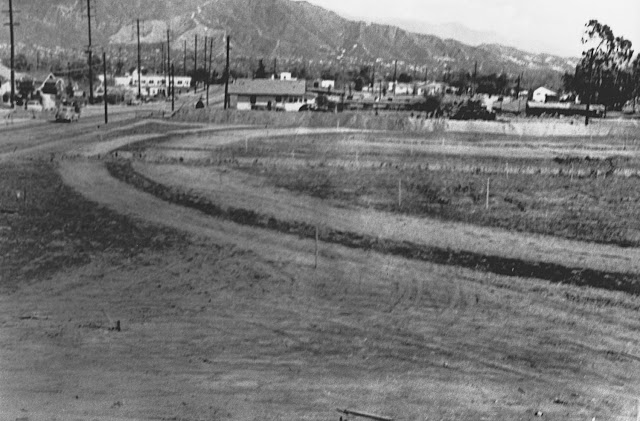 1949 - The entrance driveway. Photo: Malcolm C. Keele. Paul Rayton comments:
"The street visible to the left side of the image is Riverside Drive. It's quite identifiable to me, even now, as I've driven through the area numerous times. The street, the dip in the land visible there near an intersection, and especially the small mountains in the background -- the Verdugo Mountains, the backdrop of Burbank!" 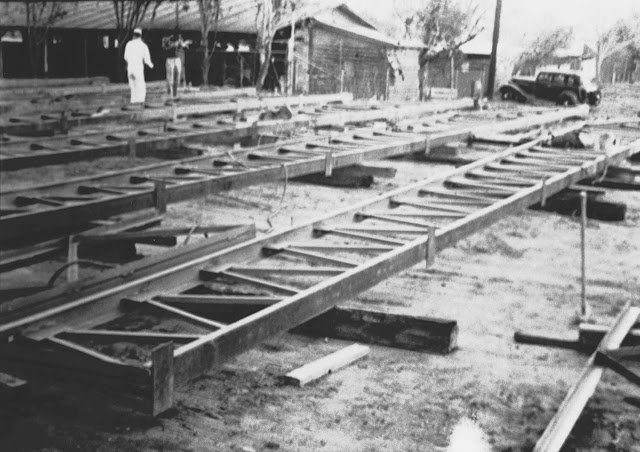 1949 - Laying out the trusses for the screen tower. Photo: Malcolm C. Keele 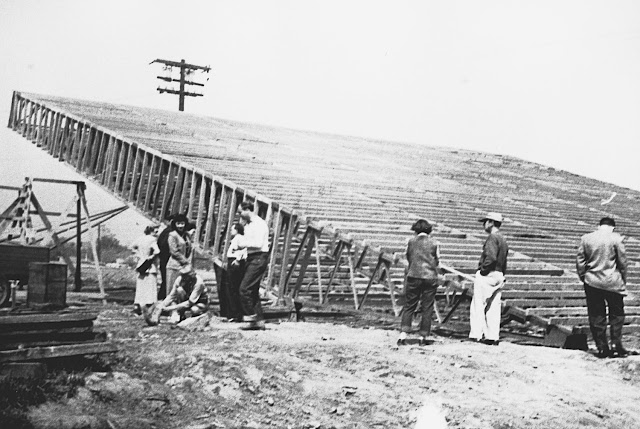 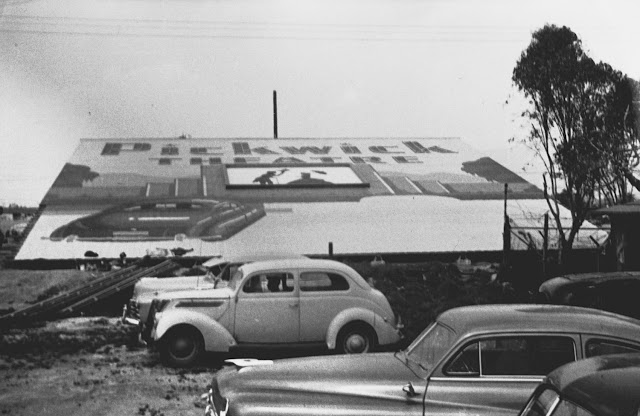 1949 - The completed mural on the back of the tower. Photo: Malcolm C. Keele 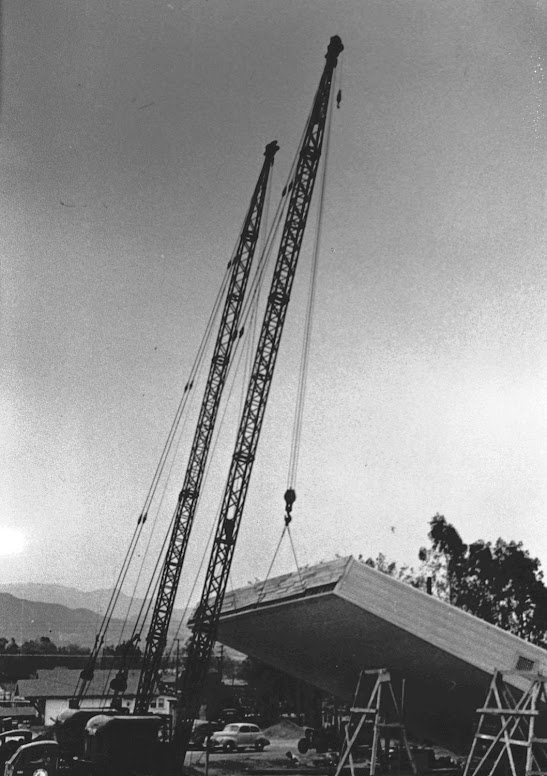 1949 - The screen being lifted into place. Photo: Malcolm C. Keele 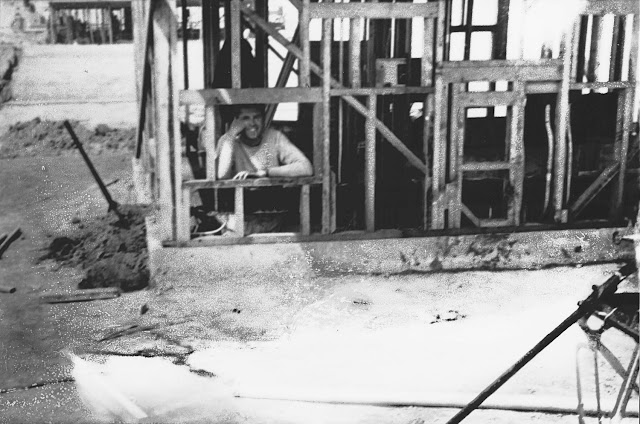 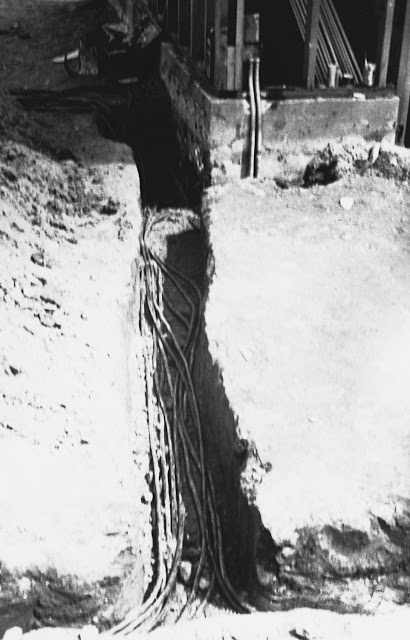 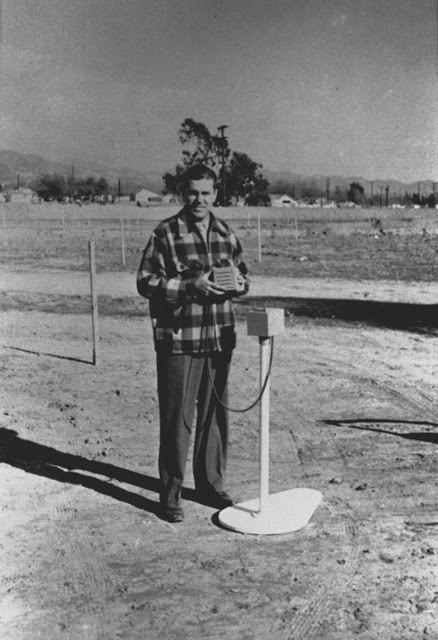 1949 - One of the first speakers to get installed. Paul Rayton comments:
"The gentleman holding the car speaker is the photographer / source of these images, Malcolm C. Keele. He was 39 at the time. Obviously someone else took this particular photo." 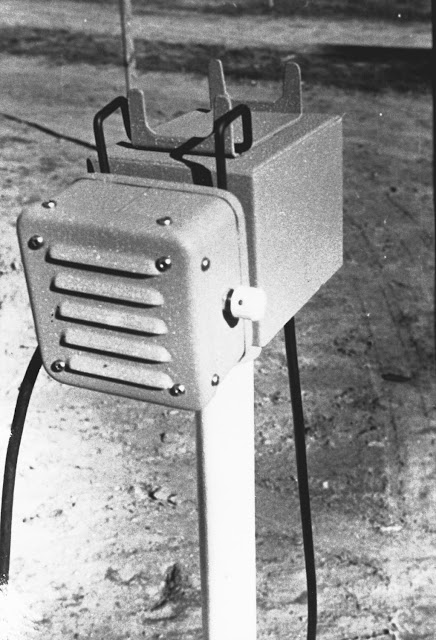 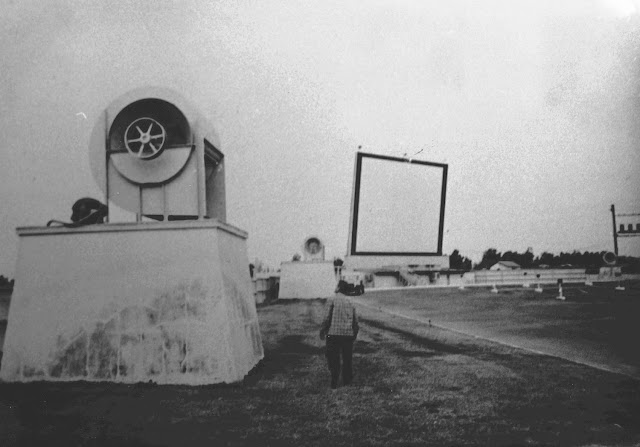 "The big 'boxes' surrounding the field appear to be air-moving fans, meant to circulate a bit of a breeze over the field on hot nights. I don't remember Malcolm mentioning those to me, but I'm sure he did."

Many thanks to Paul for making these construction photos available. 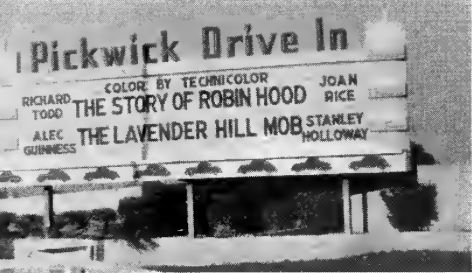 1952 - A trade magazine photo. Thanks to Dallas Movie Theaters for locating it for a post on Cinema Treasures. 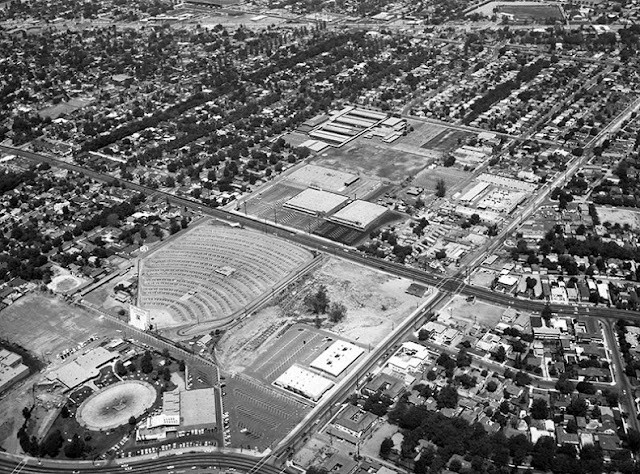 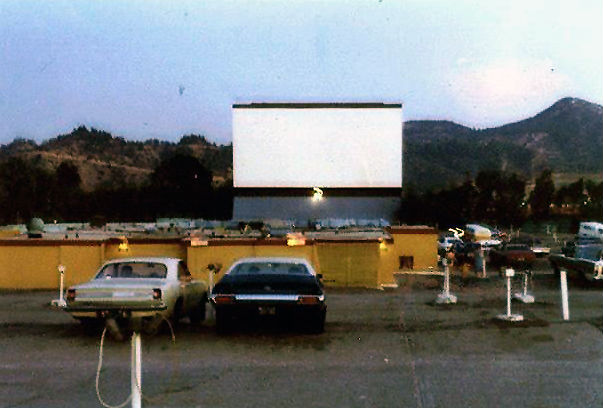 c.1972 - Thanks to Ron Strong for this photo, one appearing on his Pickwick Drive-In page on the site Bijou Memories. 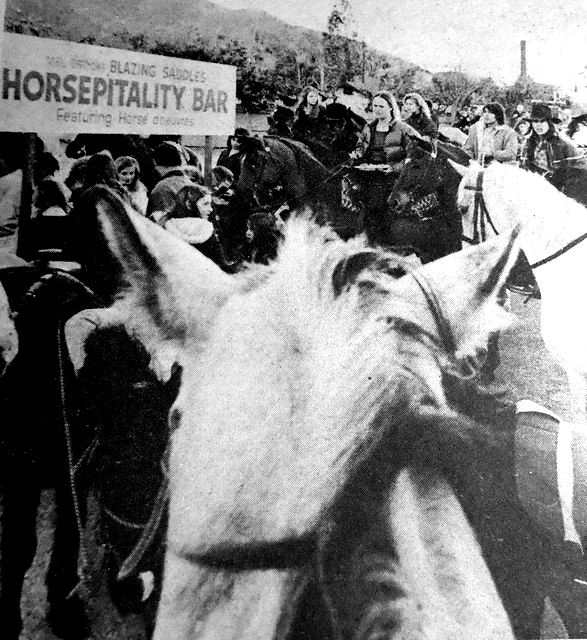 1974 - The "Horsepitality Bar" at the preview for "Blazing Saddles." Thanks to Bill Gabel for posting the photo on Cinema Treasures. It also appears on the Bijou Memories page about the Pickwick. 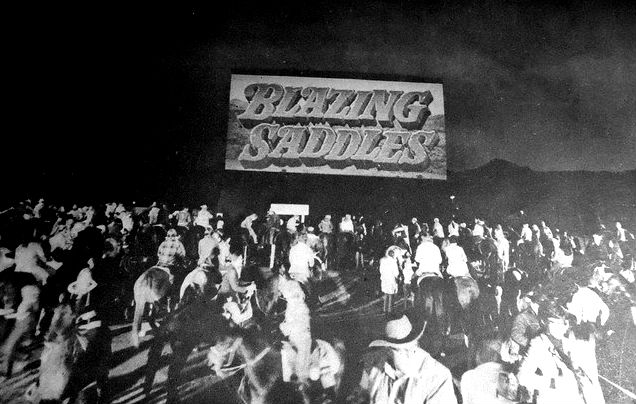 1974 - "Blazing Saddles" hits the screen. The photo appears as a post from Bill Gabel on Cinema Treasures. The photo is also on the Bijou Memories page about the Pickwick. 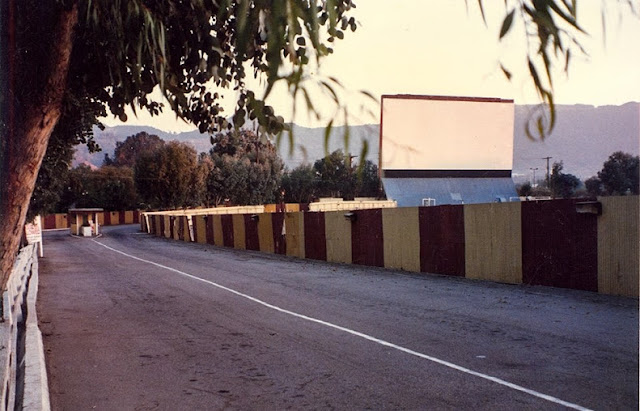 1987 - A photo by Dan Soderberg, projectionist at the theatre. It appears on Ron Strong's page about the theatre on the Bijou Memories site as well in his separate Pickwick Drive-In album on Google Photos. 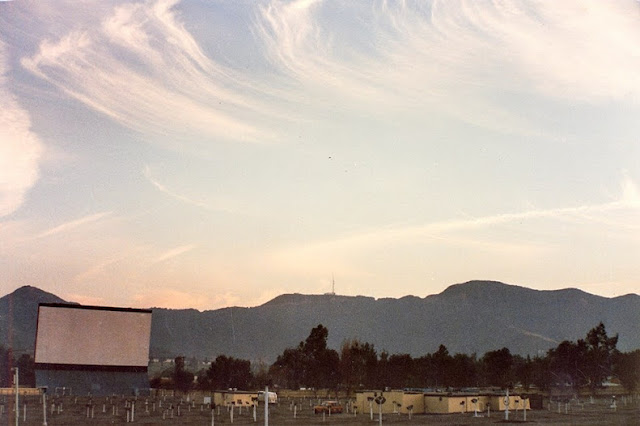 1987 - A Dan Soderberg photo. Thanks to Ron Strong for including it in his Pickwick Drive-In album on Google Photos. 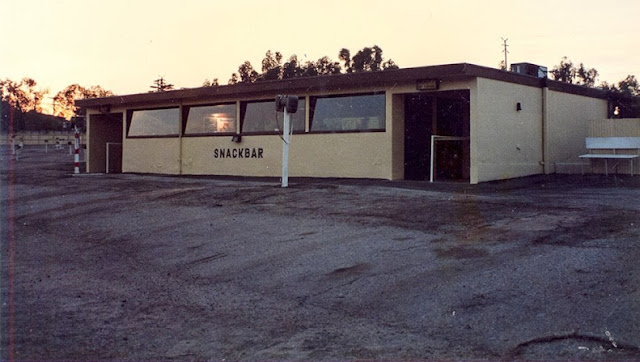 1987 - A look at the snackbar building. It's a Dan Soderberg photo appearing in Ron Strong's Pickwick Drive-In album on Google Photos. 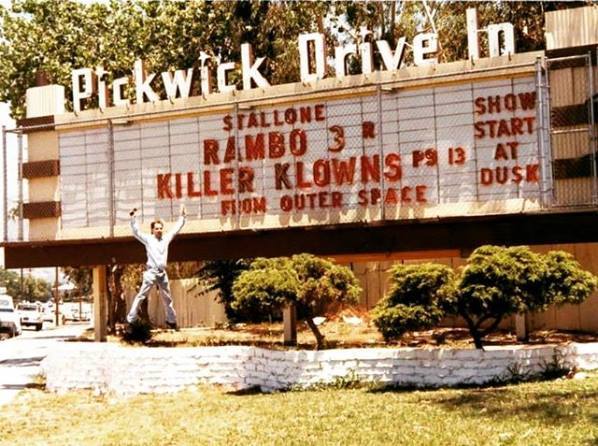 1988 - Thanks to Robert Juzefski for this photo. 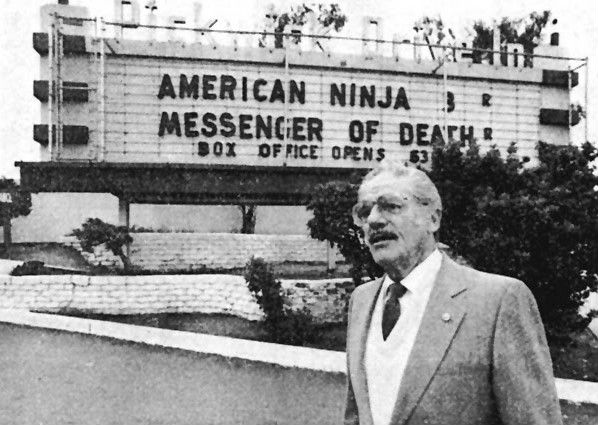 1989 - A newspaper image located by Rick Watts. Thanks to David Zornig for posting it on Cinema Treasures. The caption: "Frank Diaz, Pacific Theatres vice president, was an usher when Burbank's Pickwick Drive-In opened in 1949." 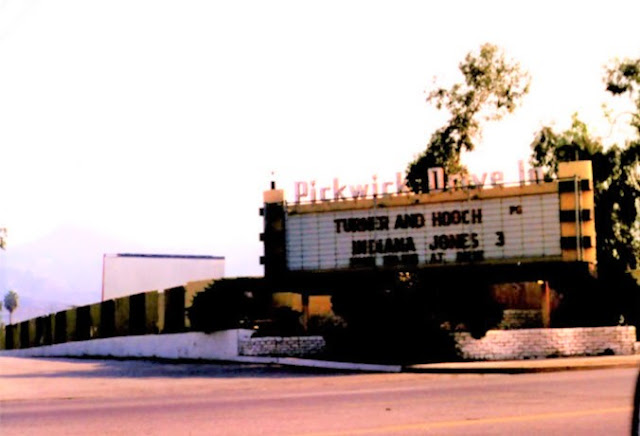 1989 - The final double feature: "Turner & Hooch" and "Indiana Jones and the Temple of Doom." Thanks to Ron Strong for the photo. It's on his Pickwick Drive-In page. 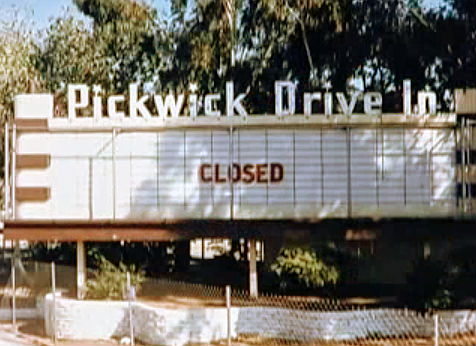 1989 - Thanks to Mister Comics for posting this view on Cinema Treasures. 1989 - The projection building post-closing. Thanks to Ron Strong for his photo. It's one appearing in his photo album about the theatre on Google Photos.

The Pickwick in the Movies and on TV:  The first appearance of the Pickwick in the movies is Peter Godfrey's "He's A Cockeyed Wonder" (Columbia, 1950) starring Mickey Rooney and Terry Moore. Jack Tillmany comments:

"On the marquee is the Columbia feature 'Fuller Brush Girl' with Lucille Ball and Eddie Albert, and 'A Girl’s Best Friend,' a non-existent film, which is apparently the second feature, and the one in progress. A uniformed female usher greets the driver, takes his money, and gets his ticket from the nearby cashier, in a glass-enclosed booth; then a uniformed male usher, with flashlight, directs the car to an available parking spot, and places the speaker on the car window. We get to see a bit of 'A Girl’s Best Friend' with Richard Quine and Lola Albright as the uncredited couple, in the usual situation, in the front seat of a convertible, before trouble in the theatre breaks out." 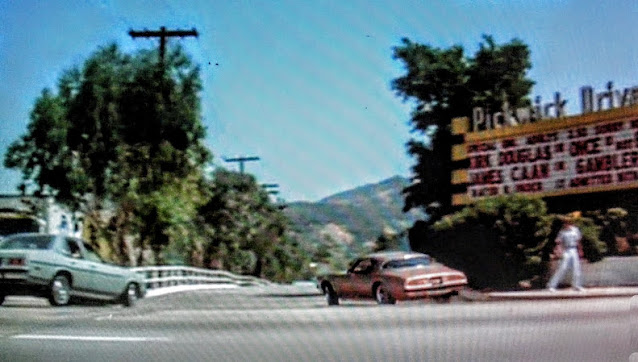 A look at the entrance from a 1976 "Rockford Files" episode titled "No-Cut Contract." The program on the marquee was "Once is Not Enough" with Kirk Douglas along with James Caan in "The Gambler." Thanks to Ron Strong for the screenshot. It appears on his Bijou Memories page about the Pickwick.

The drive-in scene in Randall Kleiser's "Grease" (Paramount, 1978) was shot at the Pickwick. John Travolta sings "Sandy" and the Filmack hot dog trailer is seen on the screen. Also starring in the film are Olivia Newton-John, Stockard Channing, Eve Arden and Sid Caesar. See the Historic L.A. Theatres in Movies post for two more shots at the Pickwick.

The drive-in is seen in John Badham's "Blue Thunder" (Columbia, 1983). The film stars Roy Scheider, Daniel Stern, Warren Oates and Candy Clark in a tale of a new police helicopter being developed for sinister uses. Thanks to Ron Strong for noting the theatre in the film. He calls our attention to the wings added onto the original screen when it was expanded for CinemaScope. See the Historic L.A. Theatres in Movies post for several more Pickwick views as well as a shot of the Fox Westwood Village from earlier in the film.

The Pickwick on Video: Donavan S. Moye notes that the Pickwick is seen in Supertramp's "It's Raining Again" video. It's on YouTube.

The site Cinema Treasures also has a page about the Pickwick. Also see the Pickwick Recreation Center album on Google Photos from Wes Clark's Burbankia.