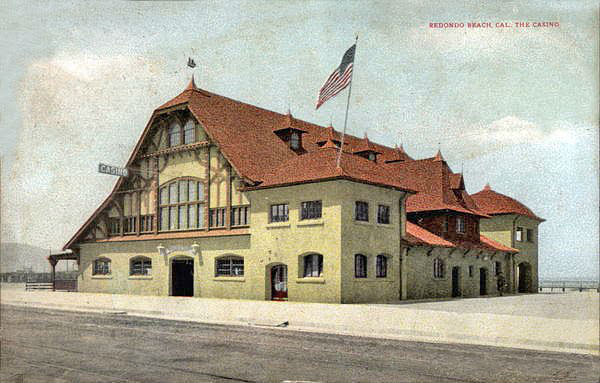 Opened: 1912 as Fancher's Capitol. It was a remodel of a three story half-timbered building constructed in 1907 for Henry Huntington that had originally been called the Casino. Thanks to realtors Bruce and Maureen Megowan for this c.1907 postcard view of the building, one appearing in the fine South Bay History section of their website.

The location was just south of the Redondo Pavilion, also opened in 1907, which contained shops, restaurants, a ground floor theatre called the Pavilion Theatre, and the Mandarin Ballroom on the second floor. South of the Casino was the saltwater Plunge, also referred to as the Bathhouse, which opened in 1909. The pools there were heated by a Pacific Electric generating plant. The Plunge was demolished in 1941 and the site became a parking lot to handle the crowds at the Pavilion's ballroom. The Pavilion was demolished in 1960.

On the Cinema Treasures page about the Capitol, contributor RBHS notes that the $30,000 Casino building was built by Frank Dorrington under commission from Henry Huntington. The buildings Huntington constructed were designed as an attraction to stimulate business for his Red Car line running along the coast.

Architect: John Parkinson. Cinema Treasures contributor Ken Roe attributes the building to Parkinson but doesn't have data on who did the 1912 theatre conversion. More research from Mr Roe:

"The auditorium and stage portion was built on wooden pilings above the sand and was located on the El Paseo beach amusement zone area of Redondo Beach. There were 600 seats on the main orchestra floor and 100 in the small shelf balcony. It was a primitive building with the roof trusses and beams visible to the audience in the auditorium. A Wurlitzer theatre organ Opus 307, style 135A was shipped to the Capitol on 13th May 1920.

"The theater was taken over by Gore Brothers of Los Angeles in 1919 and in 1920 the company was re-named West Coast Theaters. The Capitol remained the major theater in Redondo Beach until the opening of the Fox Redondo in February 1929 when the manger Thomas Quinn transferred to the new theater and the Capitol went over to second runs and westerns."

Redondo Beach was a prime resort town as well as a shipping port. The beginning of development of San Pedro as a port in 1899 started changing all that. By 1912 ships operated by the Pacific Steamship Company no longer stopped at Redondo. With the railroad pulling out in 1926, lumber schooners no longer used the Pier 3 at Topaz St. The number of visitors continued to decline due to prohibition and the depression. The three-story 225 room Hotel Redondo, constructed in 1890 for $250,000, closed and was sold for $3,000 to be recycled for its lumber.

Closing of the Capitol: It was running at least into the 1940s. Cinema Treasures contributor Magic Lantern notes that in 1945 it was called the New Capitol.

Status: All the amusement buildings in the area have been demolished. The El Paseo is now under water. The area was dredged to form a new harbor in 1961. 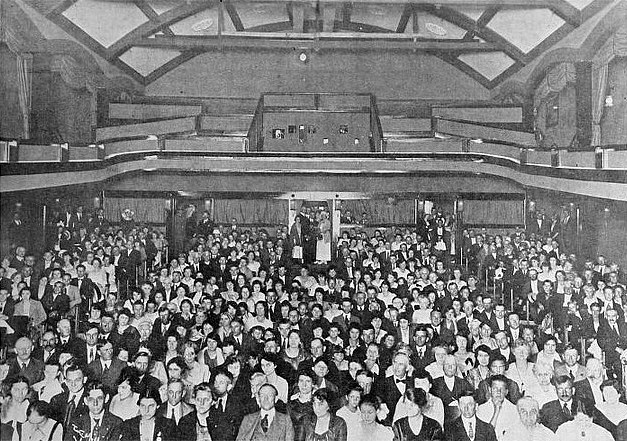 A trade magazine photo that appeared with the caption "Auditorium and balcony floors of new Capitol, Redondo, Cal."  Thanks to Elmorovivo for finding the shot for the Cinema Treasures page about the Capitol. 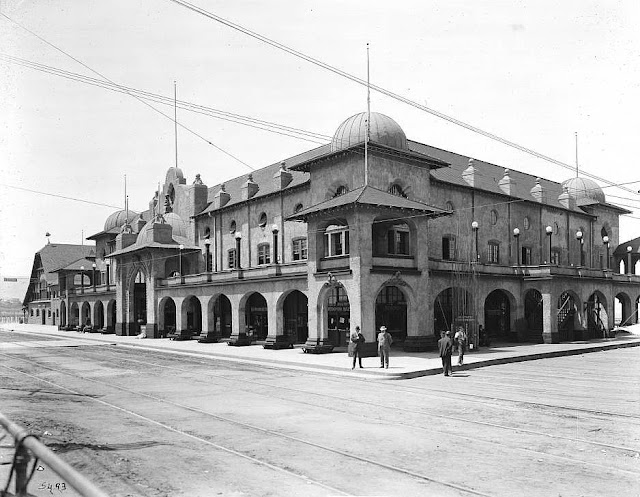 c.1908 - The Redondo Pavilion with the Casino beyond. At the far left there's no sign yet of the Bathhouse. It's a California Historical Society photo appearing on the USC Digital Library website. 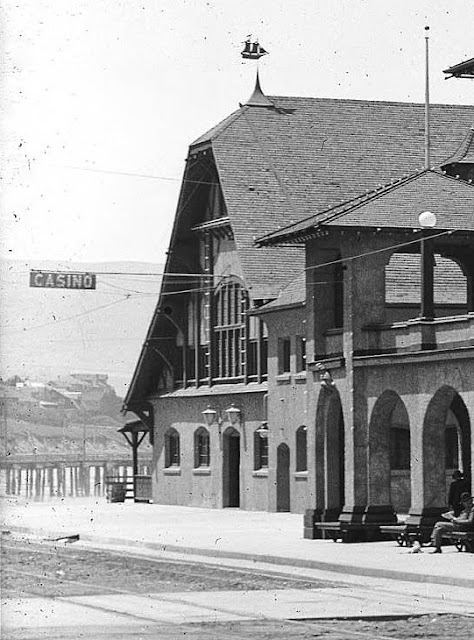 c.1908 - A detail of the Casino from the California Historical Society photo. 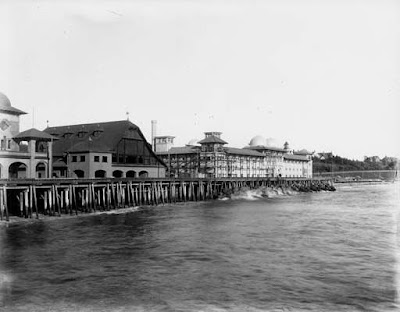 c.1909 - A view from the pier of a bit of the Pavilion plus the Casino and Bathhouse. The latter appears to be still under construction. Note the scaffolding. Thanks to Ken McIntyre for finding the photo. 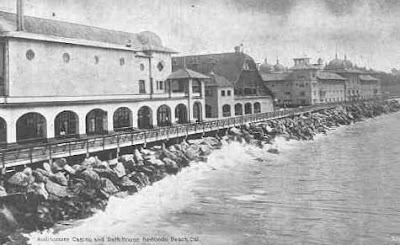 c.1910 - A postcard view of the back of the three buildings. It once popped up on eBay. 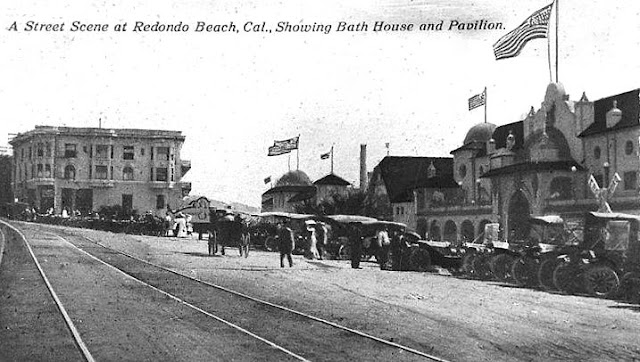 c.1910 - A view south down the tracks toward Newport Beach. The Pavilion is at the right with the Casino and Bathhouse to the left. Thanks to Ken McIntyre for finding the photo for a post on the Photos of Los Angeles Facebook page. 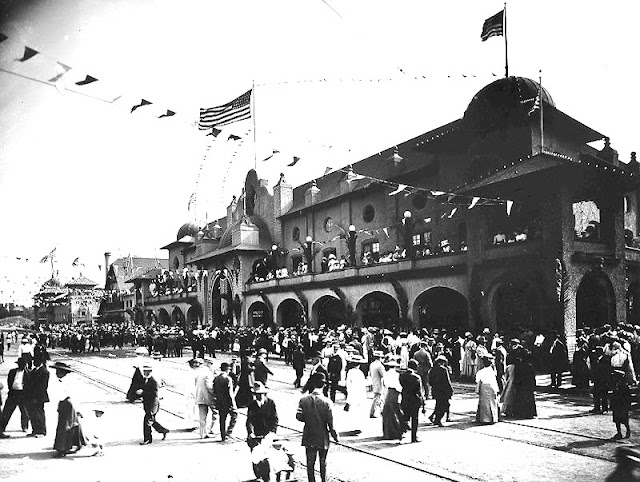 c.1910 - A South Bay Daily Breeze file photo appearing with Sam Gnerre's 2011 article "The Redondo Barn." That was a late name for the ballroom in the Pavilion.

c.1910 - A fine panoramic view of the Paseo. The Pavilion/Auditorium is in the center with the Casino to the left. Thanks to Ken McIntyre for finding the photo. He's got it in an album on Photobucket. 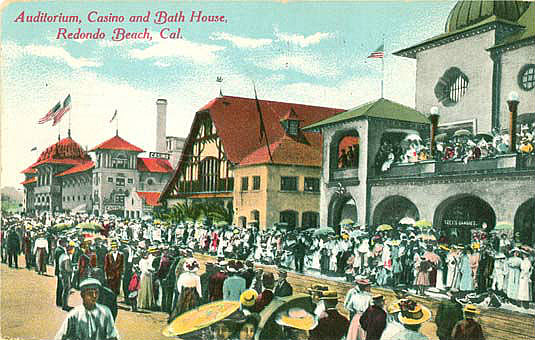 c.1910 - A postcard from the Redondo Beach section of the site Penny Postcards from California. 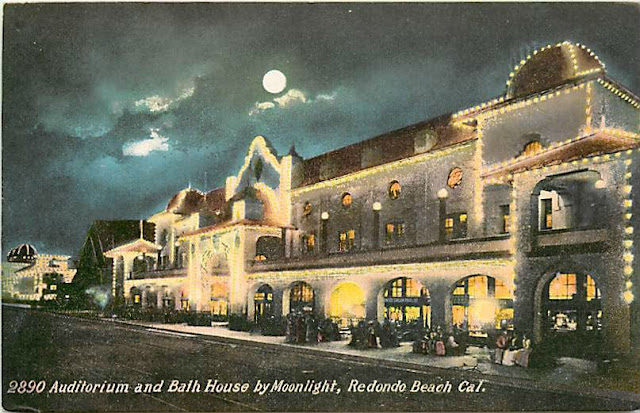 c.1910 - A moonlight postcard view with the dark hulk of the Casino in the middle between the nicely lit Bathhouse and Auditorium. The card was on eBay. 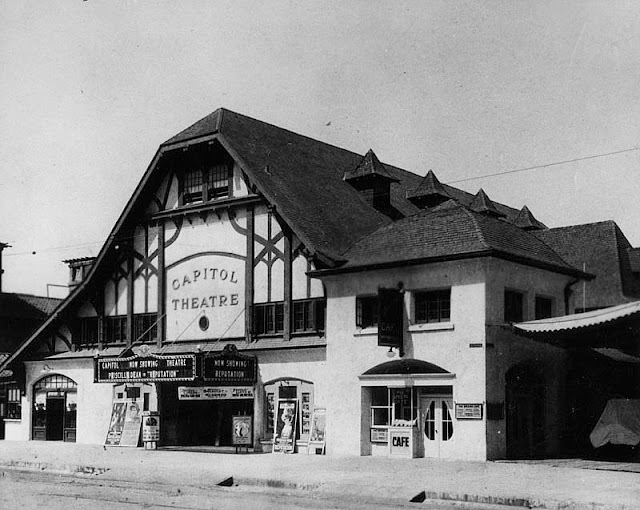 1921 - A lovely photo of the Capitol from the Los Angeles Public Library collection. The feature is "Reputation," a May release with Priscilla Dean and Harry von Meter 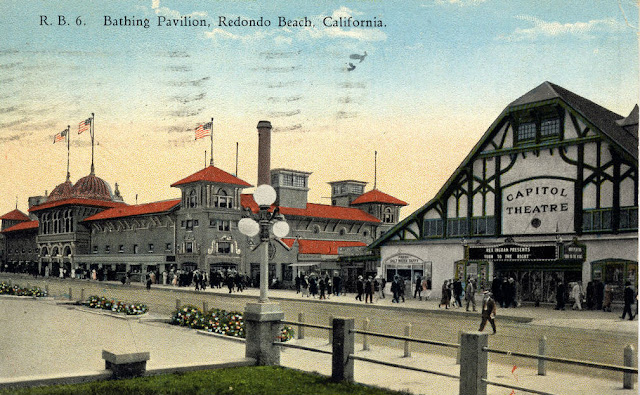 1922 - A postcard of the theatre and the Bathhouse. The feature playing is "Turn To The Right," directed by Rex Ingram. Thanks to Projectkevp for posting the card on Flickr. It's part of the KP Cinemas: postcards album of mostly British cinemas, but with detours to Hawaii and other locales 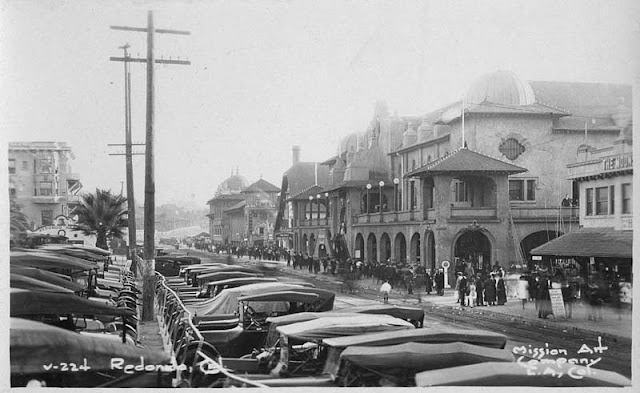 c.1923 - Looking south along the Pavilion toward the Capitol Theatre and the Bathhouse beyond. It's a postcard by Mission Art Company that's in the California State Library collection. 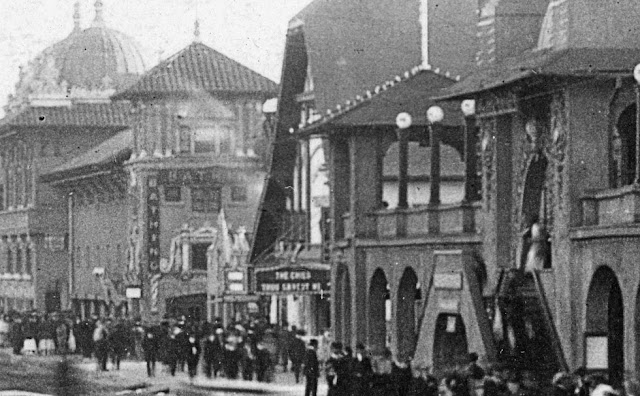 c.1923 - A detail from the California State Library photo. 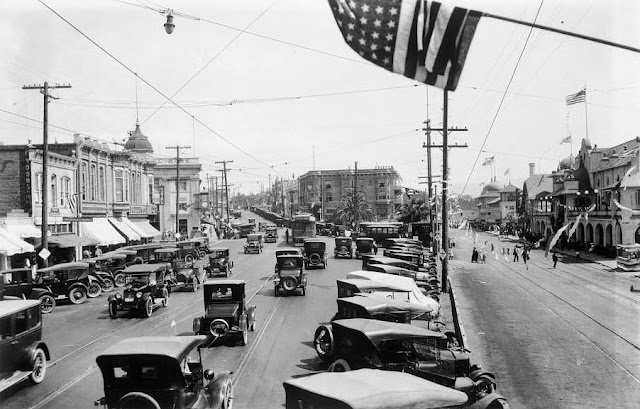 c.1925 - Looking south on Pacific Ave. with the Paseo on the right. That's the Garland Hotel straight ahead. It's a California Historical Society photo on the USC Digital Library website. 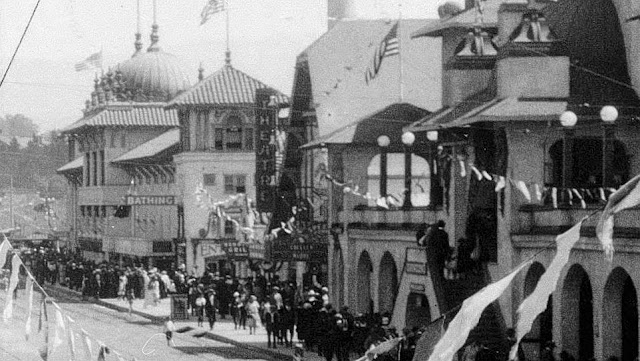 c.1925 - A closer look at the theatre and its new vertical sign from the California Historical Society photo. The marquee appears to be advertising Colleen Moore on the end panel. 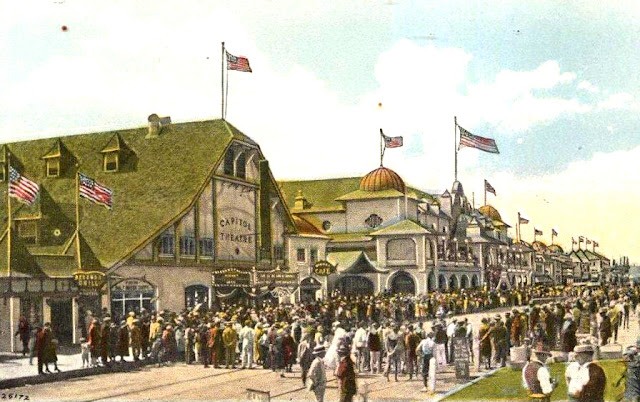 c.1925 - A postcard view of the theatre and Pavilion beyond. It was a find on eBay. 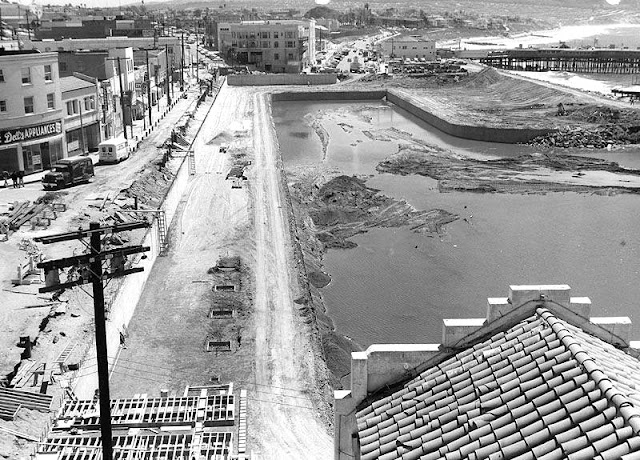 1961 - Looking south to the area where the Bathhouse, Capitol Theatre and Pavilion had once been. It was dredged for a new marina area as part of the King Harbor development. It's a South Bay Daily Breeze photo appearing with Sam Gnerre's 2011 article "The Redondo Barn."

More information: Check out the Arcadia Publishing book "Redondo Beach Pier" by Jennifer Krintz. There's a preview on Google Books. See the Cinema Treasures page on the Capitol Theatre for a fine history by Ken Roe.

There's a history page about the city on the website of the City of Redondo Beach. See Sam Gnerre's 2011 Daily Breeze article "The Redondo Barn" about the Pavilion and its ballroom. The site Silent Era has a page on the Capitol with a photo but no other information.

Other early Redondo beach theatres: The Airdome and the Elite Theatre were also in the amusement area along the beach. Both were listed as being at The Midway in the 1912/13 city directory. Their locations and history are unknown.

The film theatre on the main floor of the Pavilion was known as the Pavilion Theatre. The Art Theatre on Diamond St. was demolished c.1928 for construction of the Fox Redondo on its site. A later theatre was the Strand, a house that ended up as the Marina 1-2-3.