Opened: Presumably 1923. It's in a 1923 ad for Paramount Week listed as the Rimpau Theatre, Washington & Rimpau. The location was on the south side of the street five blocks east of La Brea Ave. It didn't make it into the 1922 or 23 city directories.

It was still the Rimpau in the 1929 directory. Sometime in 1932 or earlier it was renamed the Metro Theatre. It's listed that way in the 1932 and later city directories. 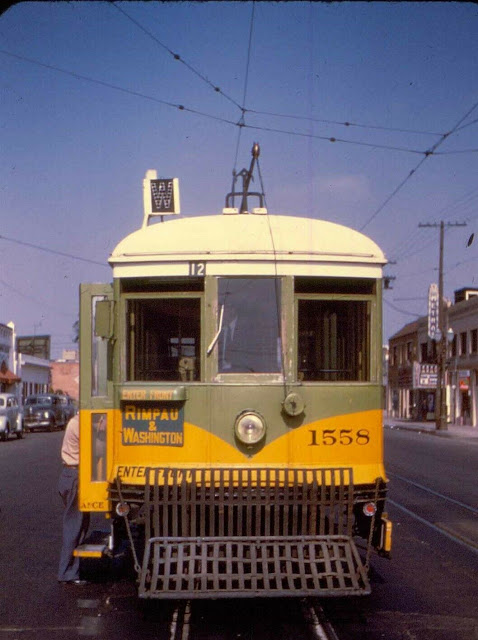 The Metro is over on the right in this 1947 photo. We're looking east. Thanks to Sean Ault for sharing this from his collection. 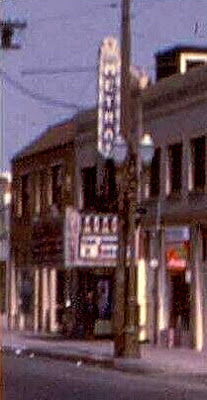 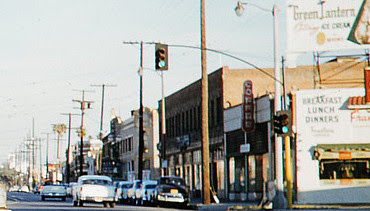 A c.1956 image located by Sean Ault. We're looking east from Rimpau Blvd. That's the Metro down in in the next block.

Nick and Edna Stewart formed a theatre group in 1950 that initially performed in a converted garage. After using several other venues they took over the Metro in 1965 and renamed it the Ebony Showcase, the first African-American owned legit theatre in Los Angeles.

The mission was to allow black actors to perform in roles outside the usual media stereotypes. Nick had previously done comic roles on "Amos 'n Andy" and was the voice of Br'er Bear in Disney's infamous "Song of the South." 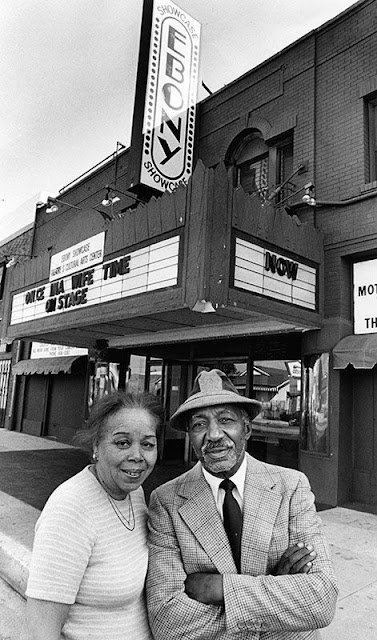 A 1981 Paul Chinn photo of Nick and Edna Stewart at the theatre. The photo is now in the Herald Examiner collection of the Los Angeles Public Library. 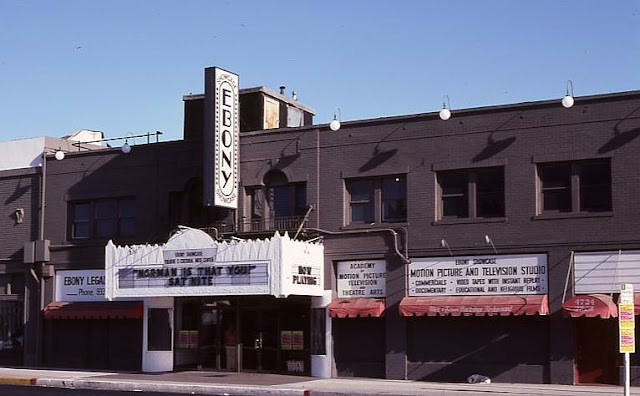 A 1983 photo is from the now-vanished American Classic Images website.

Looking east on Washington. The photo is one from the collection of Valarie Stewart, Nick and Edna's daughter. It appears on EbonyShowcase.org, a website she maintains that details the group's history and features photos of many performances. She notes that the two buildings beyond the theatre, as well as a nearby house not pictured, were all part of the Ebony complex. See three small photos of the demolition on Valarie's controversy page.

Closing: In 1998 the theatre and adjoining parcels were seized via eminent domain by the Los Angeles Community Redevelopment Agency. While initially promising to spare the theatre, the CRA demolished it one day without notice, claiming it was necessary due to structural instability. The Stewarts did not end up producing shows in the new building.

The new building: The city-owned Nate Holden Performing Arts Center, a complex designed by FSY Architects, is now on the site. The tenant is Ebony Repertory Theatre. Also see the city's Department of Cultural Affairs page on the Nate Holden. The building includes a 399 seat theatre, a rehearsal hall and several currently unused retail spaces. Holden was city councilman for the area at the time of the demolition of the earlier buildings. 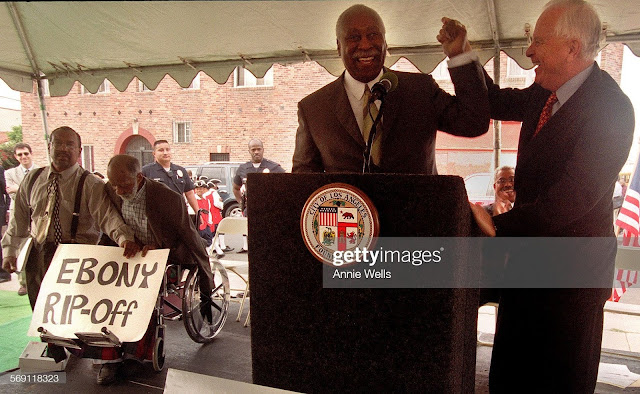 Nick Stewart sits on the left, uninvited to participate, as local dignitaries congratulate themselves about the Ebony Showcase demolition and the start of the new building. It's a photo by Annie Wells for the L.A. Times that appears on the the Getty Images website. The copy on the Getty site:
"Tenth District Councilman Nate Holden and Mayor Richard Riordan raise their arms in a gesture of solidarity as they agree to begin building the new performing arts center that will be on the site of the former Ebony Showcase Theater. Nick Stewart, the original owner of the Ebony, left, in the wheelchair, with his son Christopher next to him, showed up uninvited and unannounced to show their disapproval of the project. They claim that the city tore down the original building unnecessarily and that the city was illegally using the copyrighted name, Ebony Showcase Theater."
Thanks to Valarie Stewart for locating the shot in the Getty collection. She comments: "It is interesting to note that the caption of the photo states that we showed up uninvited to a public event. My father passed away exactly one week to the day of the event." 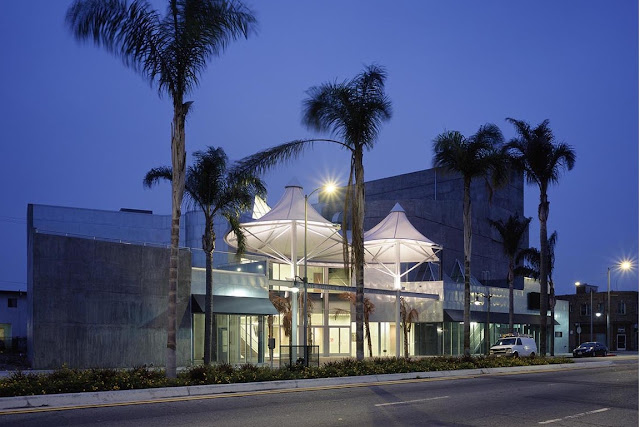 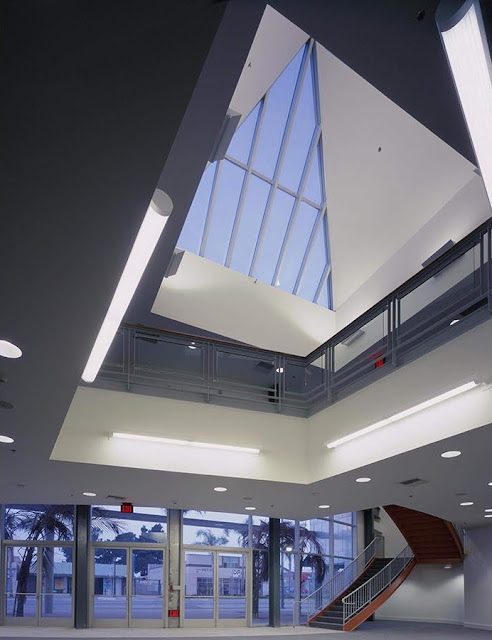 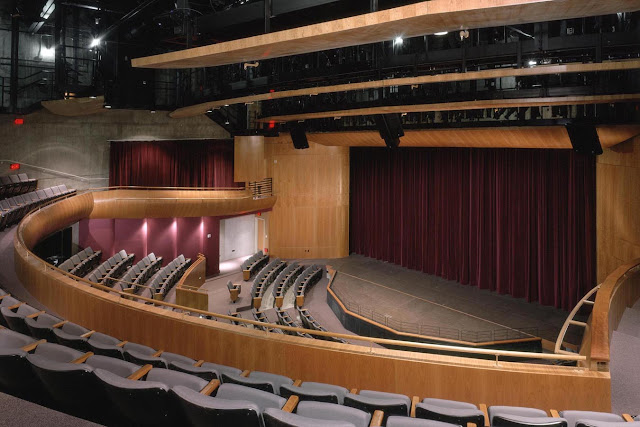 A balcony view of the 399 seat auditorium. Photo: FSY Architects 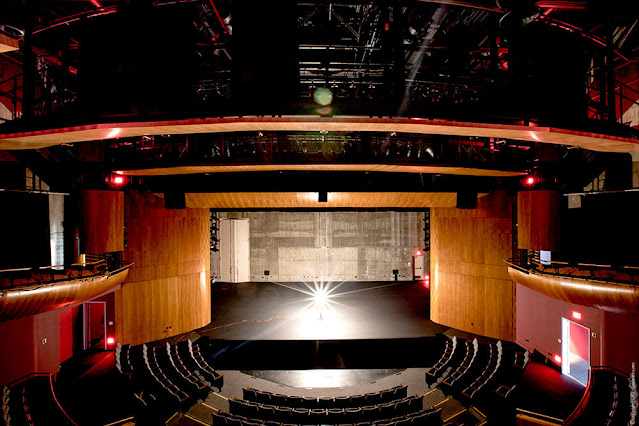 A look down from the top. Thanks to Sara Jane Boyers for sharing her photo on the Theatre Architecture Facebook page. This is one venue she photographed for her "Ghostlight" project, using only that source of illumination. 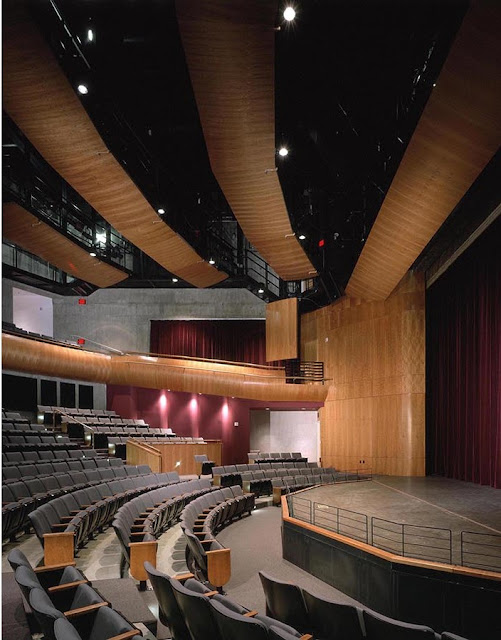 Across to house left. The thrust can be turned into an orchestra pit. Photo: FSY Architects 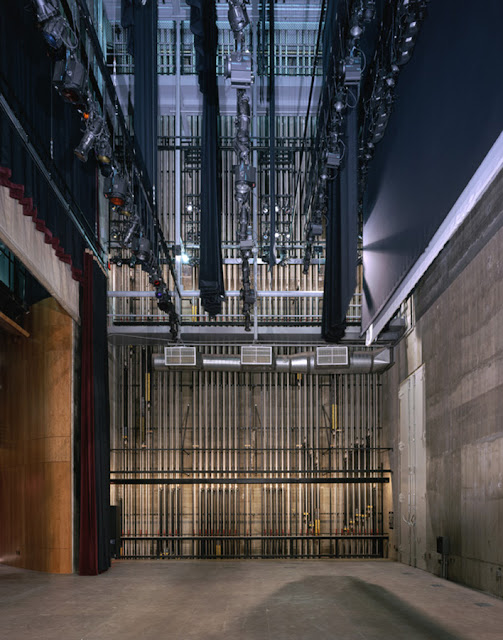 More information: See the Cinema Treasures page on the now-vanished theatre, which they list as the Metro. An article about the Ebony Showcase appeared in the November 28, 1982 issue of the L.A. Times.