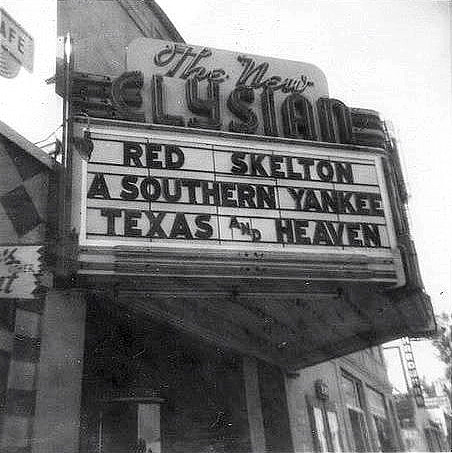 Opened: Sometime around 1927. There is no 1927 city directory listing but in the 1929 city directory it's listed as the Riverside Theatre. It was later renamed the Elysian. It's on the west side of the street, a half block south of Newell St. As we see in this 1948 photo, they were then calling it the New Elysian. By 1950 they had dropped the "new" from their ads. Thanks to Ken McIntyre for finding the photo for a post on the Photos of Los Angeles Facebook page. 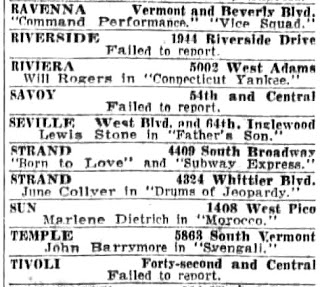 The theatre, still called the Riverside in 1931, neglected to call in their titles to the Times. Thanks to Ken for locating the column of ads. "Failed to report" is one of his favorite films.

In the early 60s the building was owned by the state and was going to be demolished for a freeway that didn't happen. It was purchased in 1965 by Mark and Kathryn Fuller for their Studio Theatre Company, which had been performing in Eagle Rock.

It was called the Studio Theatre Playhouse from 1966 onward. It became known as the Colony Theatre or Colony Studio Playhouse when the Colony Theatre Co. was in residence from 1975 through 2000. In "Colony Theater Co. Outgrows Its Venue..." , a 1992 L.A. Times article, it was noted that the company was just using part of the building in a 99 seat configuration.

In 2000 it was referred to as the Colony Studio Theatre, and at that time the Colony group was making a move to Burbank. From 2000 until about 2012 it was the Knightsbridge Theatre, under the direction of Joseph Paul Stachura.

After the demise of Knightsbridge, the building was once again called the Studio Theatre Playhouse. From 2016 until 2020 the theatre was used by the Los Angeles Theatre Academy, an organization founded by Alejandra Flores that is devoted to training children in the theatre arts. They have another home at the Elysian Amphitheatre. Their use stopped with the pandemic shutdown in mid-2020.

In 2020 the building was placed on the market with an asking price of $4.5 million. Barry Lank had the news in "1920s Riverside Drive theater is up for sale," his September story for The Eastsider. Thanks to Dave Ptach for spotting the article. The owner was Kenneth Fuller, grandson of the couple that purchased the building in 1965.
Status: It reopened in October 2021 as The Elysian, a comedy club. The new owner is Steven Edelson, who has also been involved with other clubs including Home, Los Globos and El Cid. Barry Lank had the news in "Nearly century-old Elysian Valley theater reopens as a comedy space," an October 27 story for The Eastsider. Thanks to Yasmin Elming for spotting the news.
Interior views: 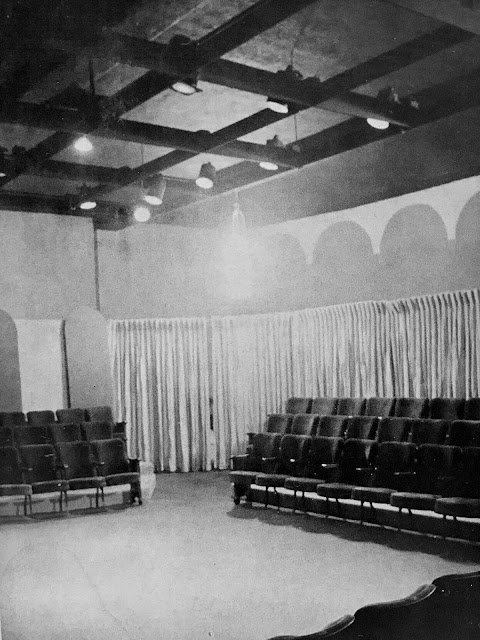 The auditorium after being converted to legit theatre use in 1965. It's a photo appearing with the 2020 Eastsider article courtesy of Alejandra Flores. 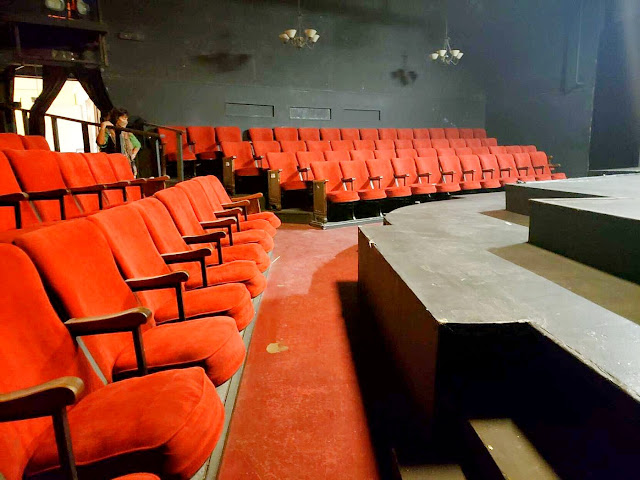 A 2020 photo by Barry Lank that appeared with his Eastsider article. The caption: "Alejandra Flores, at the end of the row, looks at the seats and stage where she ran shows with the Los Angeles Theater Company for the last four years." Thanks, Barry. 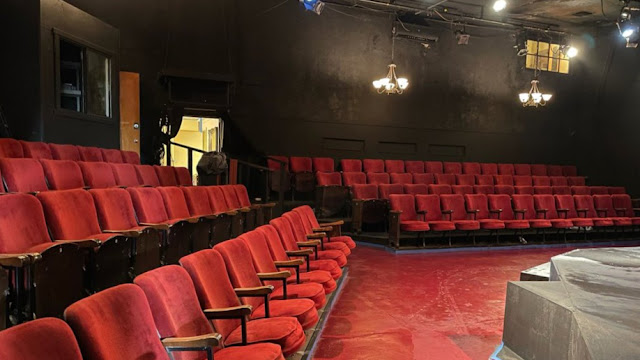 A 2021 photo appearing on the website of The Elysian. 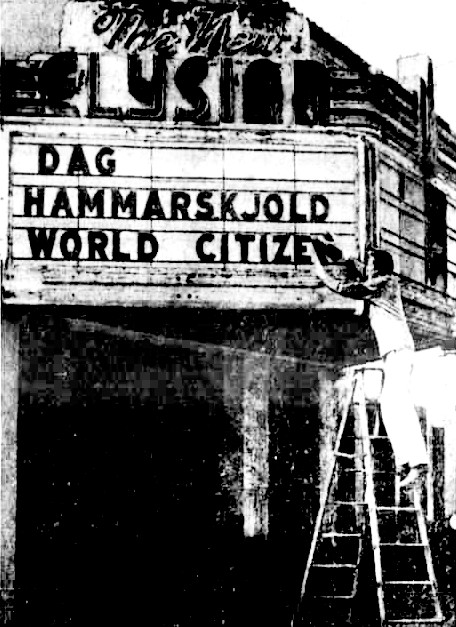 1961 - A photo that appeared in the October 6 issue of the L.A. Times. Thanks to Ken McIntyre for locating it, along with an accompanying article, for a post on the Photos of Los Angeles Facebook page. The caption:

"Message - Jon Lackey, who lives alone above the New Elysian Theater at 1952 Riverside Dr., puts up another of the idealistic messages that have long mystified and delighted motorists. This one is serious, but many have pixie touch." 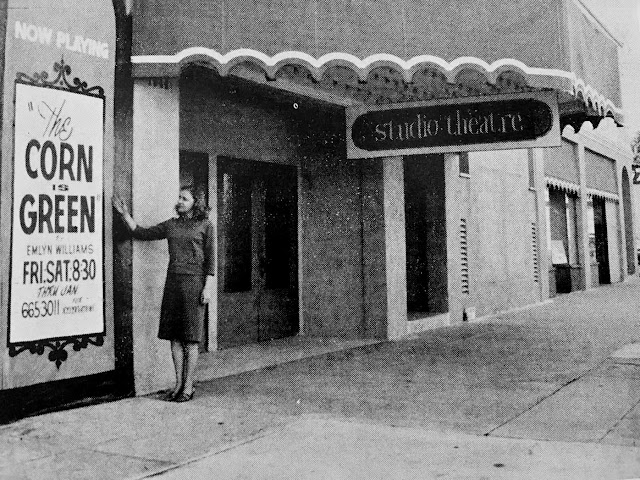 c.1965 - Kathryn Fuller in front of the theatre that she and her husband had recently purchased. It's a photo appearing with the 2020 Eastsider article courtesy of Alejandra Flores. 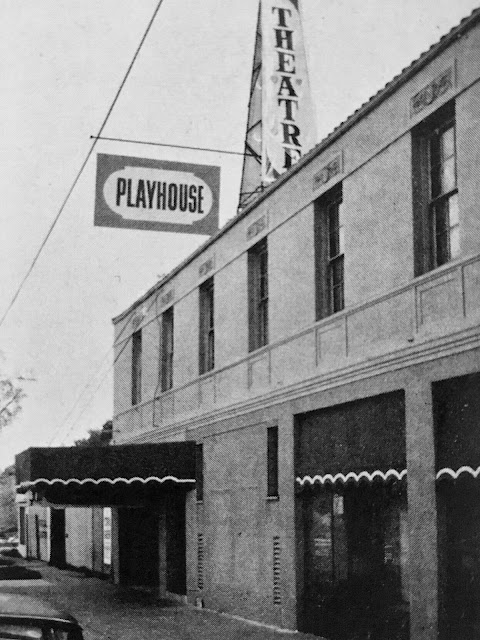 c.1965 - A view from the north. It's another photo appearing with the Eastsider article courtesy of Alejandra Flores.

c.2010 - A view taken by Don Solosan that was part of a survey by the now-dormant Historic Theatre Committee of the L.A. Conservancy to determine the condition of surviving vintage theatre buildings in L.A. Thanks to Hillsman Wright of the Los Angeles Historic Theatre Foundation for making Don's photos available.

c.2010 - Another look, this time from a bit to the south. You can see a bit of the original auditorium
space at left, behind the retail and apartment building. Photo: Don Solosan 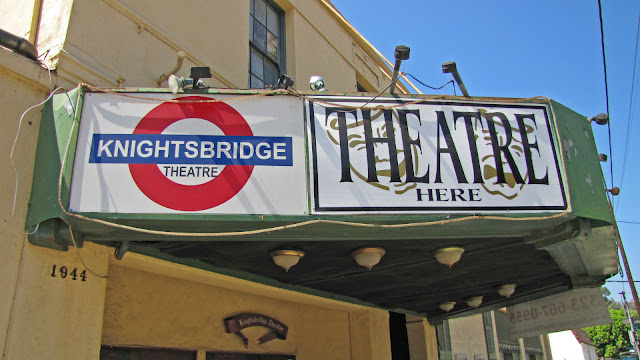 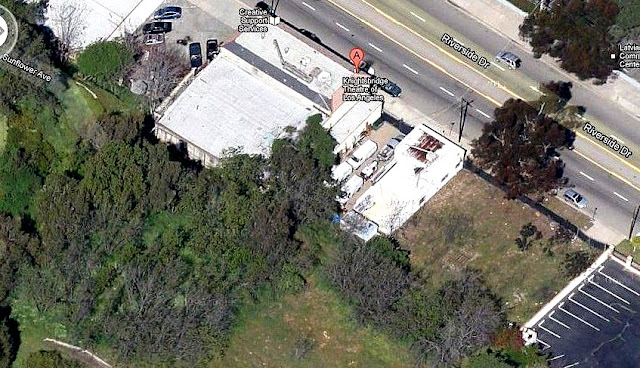 2011 - A Google aerial view showing the auditorium portion of the building nestled into the hillside. Thanks to Noirish Los Angeles contributor Ethereal Reality for including this on his Noirish post #5841. 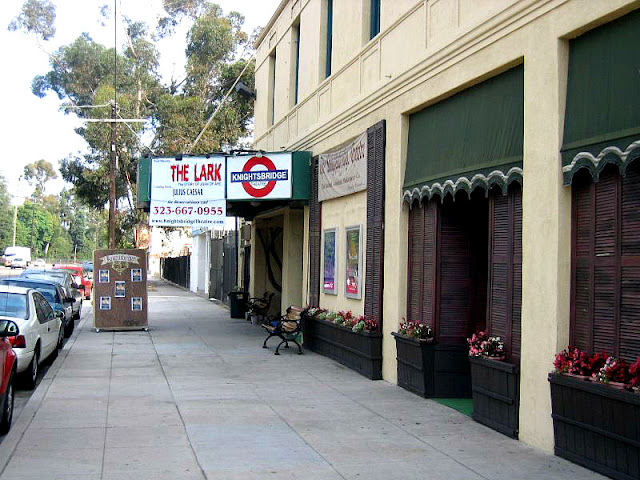 c.2012 - A nice look along the facade from Noirish Los Angeles contributor Ethereal Reality on his Noirish post #5838.

More Information: See the Cinema Treasures page on the theatre, which they list as the Knightsbridge. The Cinema Tour page has a 2002 photo of the exterior from Bob Meza.