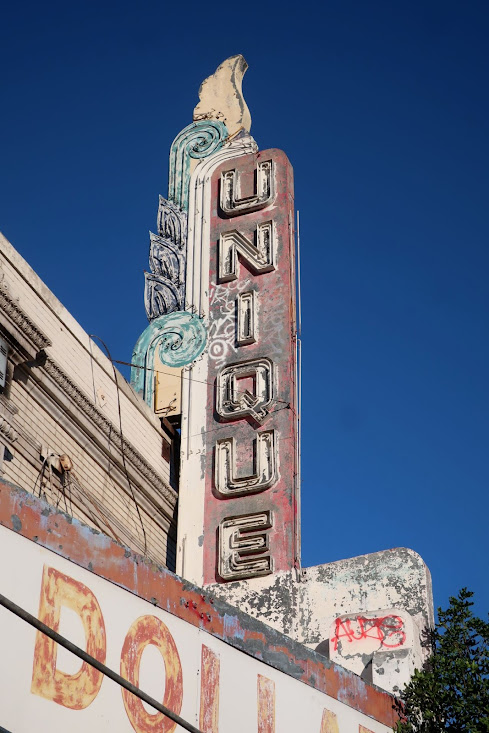 Opened: The Unique Theatre opened sometime around 1923. The location is on the north side of the street two and a half blocks west of Gage Ave. This view of the sign was taken in December 2020, several months after the building was closed due to damage from an arson fire next door. Photo: Bill Counter
Joe Vogel notes: "The L.A. County Assessor’s office gives an original construction date of 1922 and an effectively built date of 1935 (a major renovation) for the 11,532 square foot building at this address..." It's in the 1923 and 1924 city directories with an address of 4007 1/2 E. 1st.
There was soon to be a bit of street renumbering. Starting in the 1925 directory the address has become 3645 E. 1st. One of ithe theatre's neighbors, Belvedere Service Electric, was similarly renumbered: 4005 in 1924 and that became 3643 by 1925. It's unknown how much of 1st got renumbered.

An October 1975 ad for the theatre as a Spanish language house that appeared in the Eastside Journal.

A 1976 ad in the Eastside Journal. Thanks to Ken McIntyre for locating the ads for a post on the Photos of Los Angeles Facebook page.

Closing: It was obviously running at least until 1992. The closing date is unknown.


Status: Until September 2020 the space was being used for retail, sort of a swapmeet called the Unique Dollar. The floor had been leveled and there wasn't much of architectural interest visible inside.

A fire broke out early in the morning on September 16, 2020 damaging the former theatre space, the apartments on the second floor of the building, a nearby house, and a 62 unit housing project that was nearing completion. The Eastsider had the story in their article "Fire engulfs East L.A. housing project under construction."

While the fire was started in the housing project east of the theatre, falling debris caused the theatre's roof to collapse. The expectation is that a new building will eventually constructed behind the facade. The property was for sale in 2021.
Portions of the building, including the facade and the signage, were nominated in 2021 for Los Angeles County Landmark status. County Supervisor Hilda Solis did the push. The news that the building had been nominated was spotted by Kim Cooper in a September 2 County of Los Angeles Department of Regional Planning Facebook post. The Eastsider picked up the story with "An old East LA movie house may become a historic landmark." Thanks to Chris Nichols for spotting that one.
The building was declared a Los Angeles County landmark by a vote of the County Supervisors on April 19, 2022. And then at 11 pm that day there was another fire in the building. See a video clip posted by Lord Chize on Twitter. Esotouric's Secret Los Angeles had the news about the landmarking in an April 19 Facebook post and did a post-fire video update the next morning.
Interior views: Thanks to Eric Lynxwiler for this 2006 photo of the lobby chandelier. It's on Flickr. 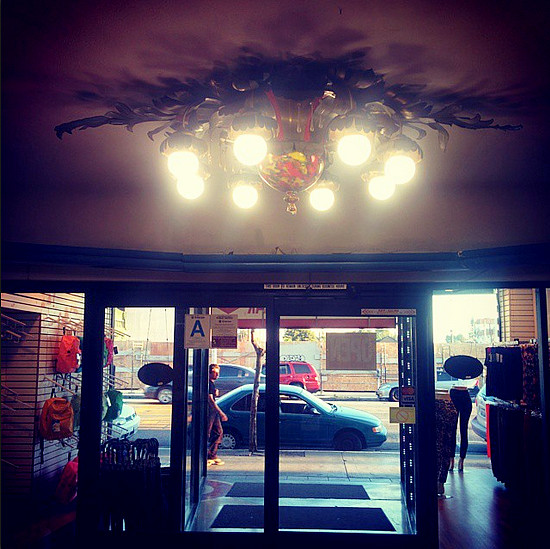 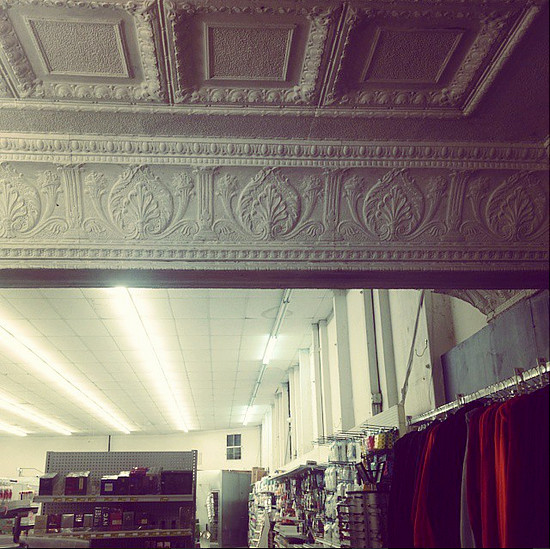 A bit of vintage ceiling decor. Thanks to Kim Cooper and Richard Schave for the 2015 photo on the Esotouric Los Angeles Facebook page. 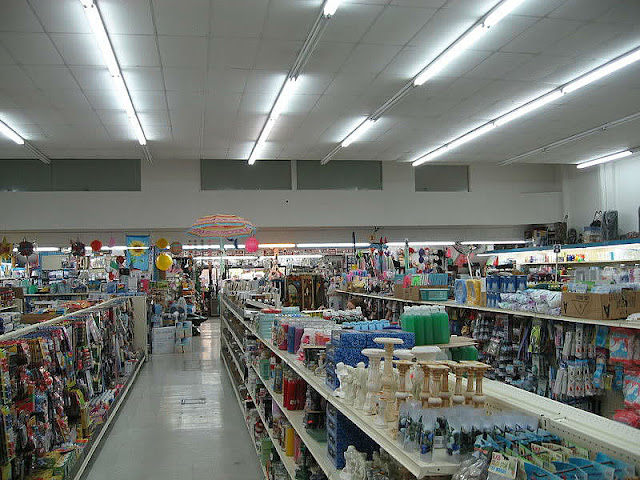 The interior as a retail space. Photo: Ken McIntyre - 2007 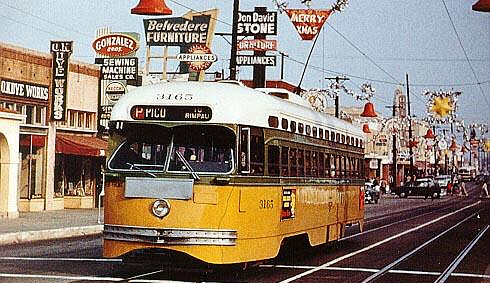 1956 - This view looking east toward the theatre is from the Metro Library and Archive on Flickr. 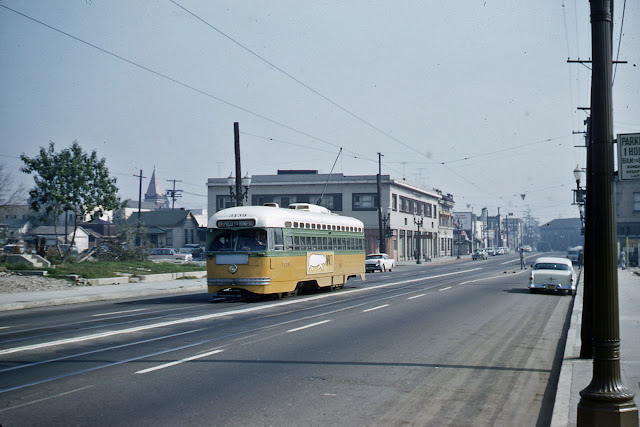 c.1962 - Looking east on 1st with the Unique in the distance. Thanks to Sean Ault for sharing the photo from his collection. 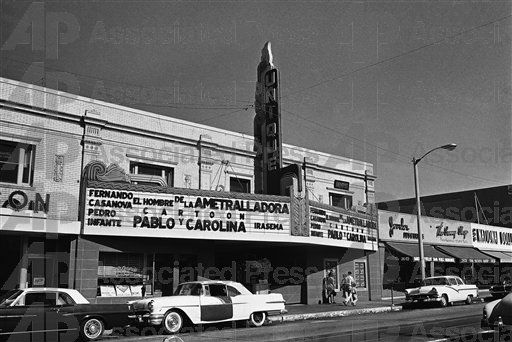 1964 - The Unique as a Spanish language house. It's a photo from AP Images. Thanks to Cinema Treasures contributor Tinseltoes for posting a link to this one on that site. 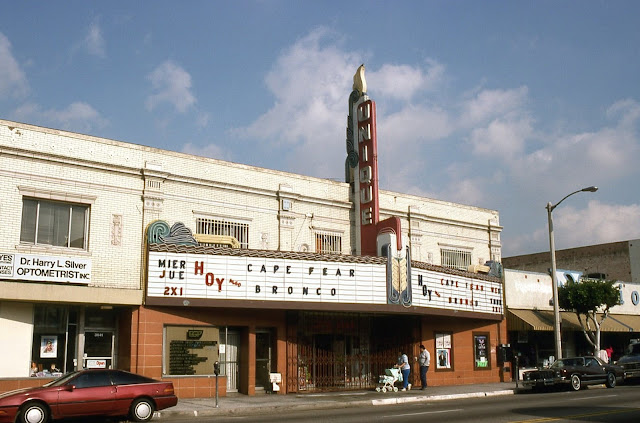 1992 - Thanks to Paul Kakazu for sharing this photo he took January 6. It appears as a post on the Photos of Los Angeles Facebook page. 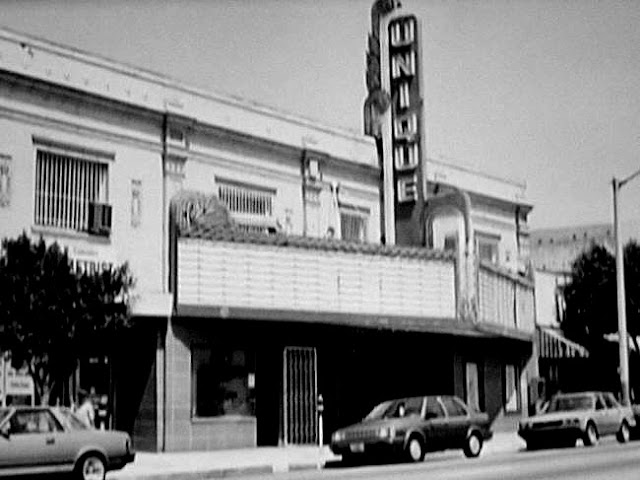 c.1995- A shot of the Unique after closing that was taken by cinematographer Gary Graver. He took many photos of dying single screen theatres. Wikipedia has an article about Graver. More of his photos can be seen in two compilations on You Tube: "Second Run - part 1" and "Second Run - part 2." Thanks to Sean Graver for use of the photo. 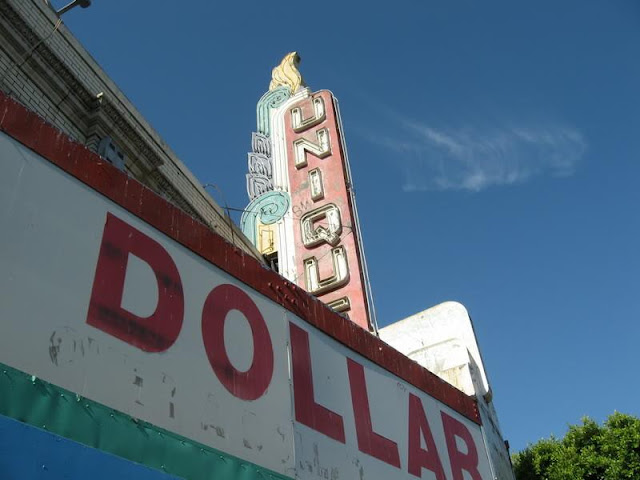 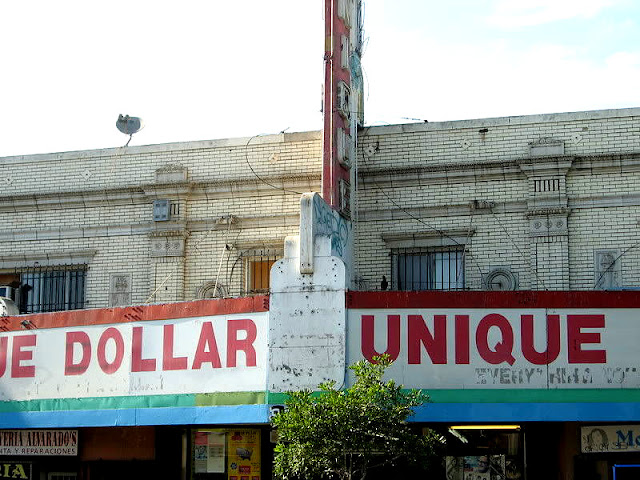 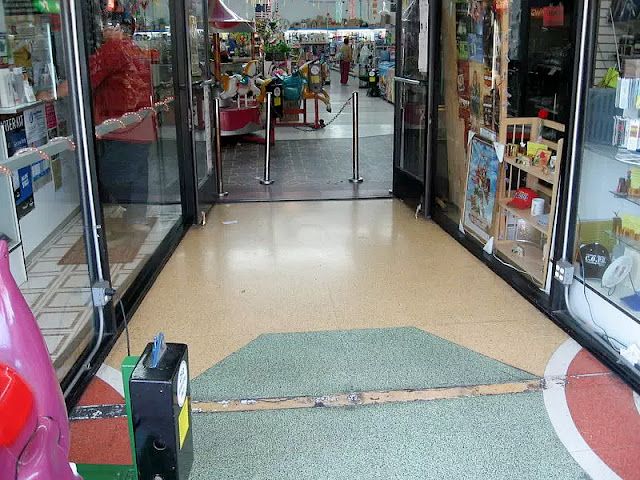 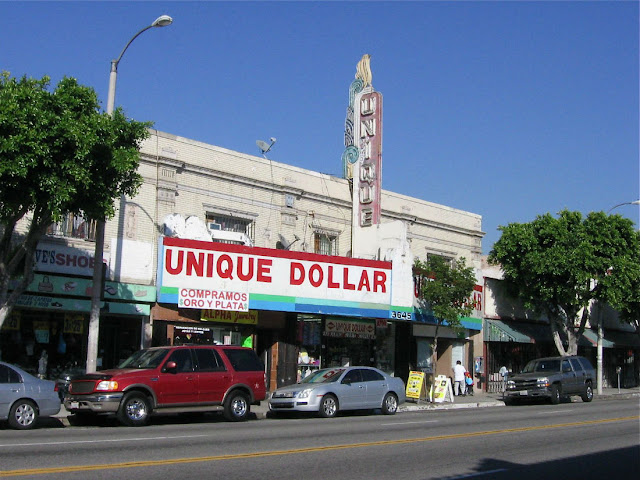 2012 - The building as seen from across the street. The facade appears unchanged for 1923. The signage probably dates from the 40s. Photo: Bill Counter 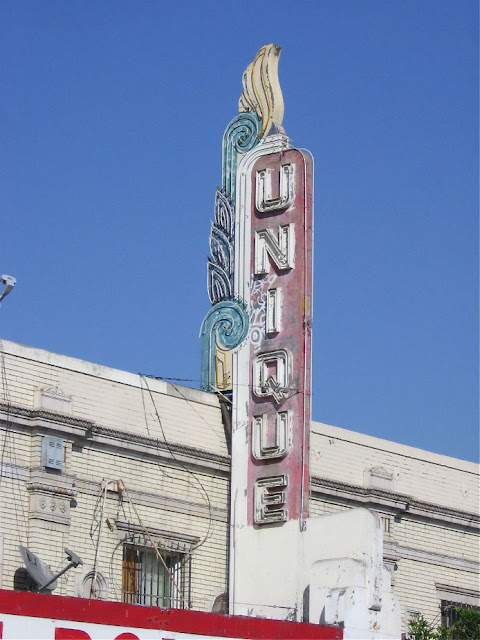 2012 - A closer look at the vertical. Photo: Bill Counter 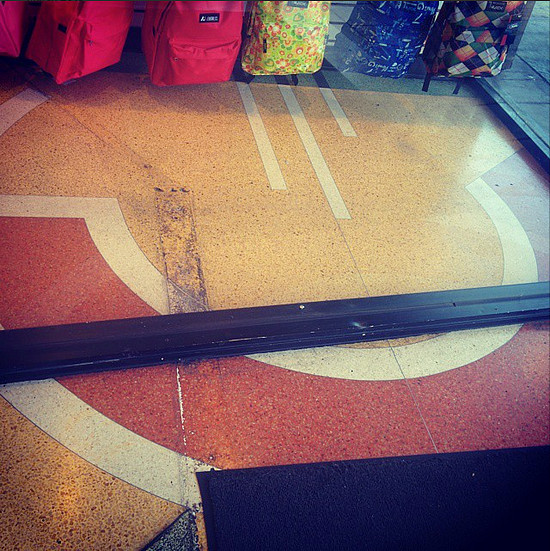 2015 - A terrazzo detail. Thanks to Kim Cooper and Richard Schave for their photo. It's from a post on the Esotouric Los Angeles Facebook page. 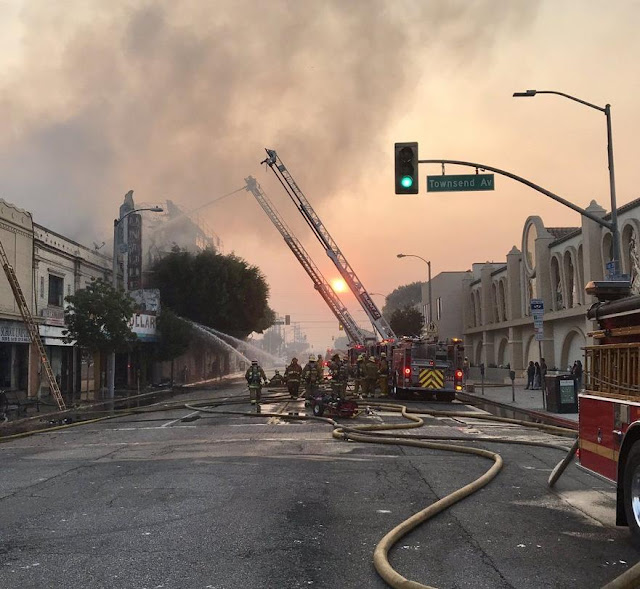 2020 - A photo from the L.A. County Fire Department taken September 16, the morning of an arson fire in the building next door. The photo appeared with The Eastsider's story "Fire engulfs East L.A. housing project under construction." 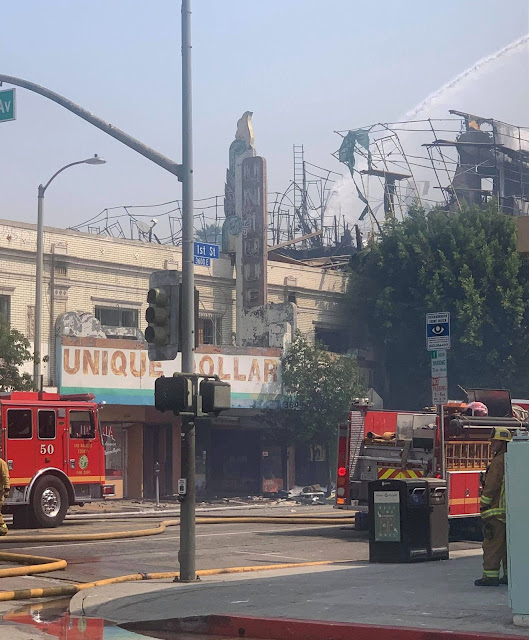 2020 - Thanks to Israel Rodriguez for his September 16 photo, taken the morning of the fire. 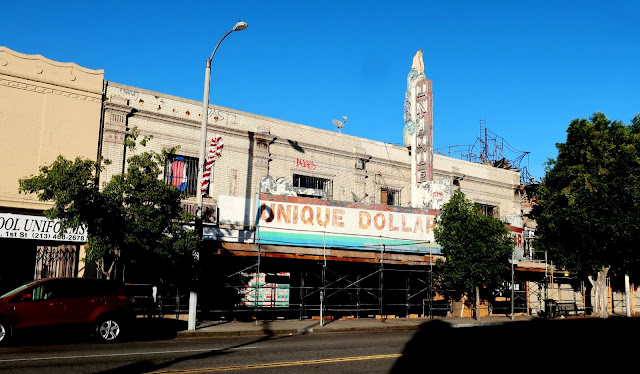 2020 - The closed building on December 15. At the time of the photo, demolition was underway on the building off to the right where the fire started but there was nothing happening yet at the Unique. Photo: Bill Counter 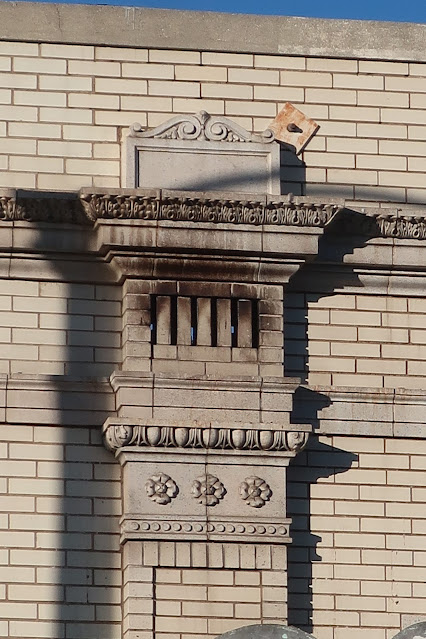 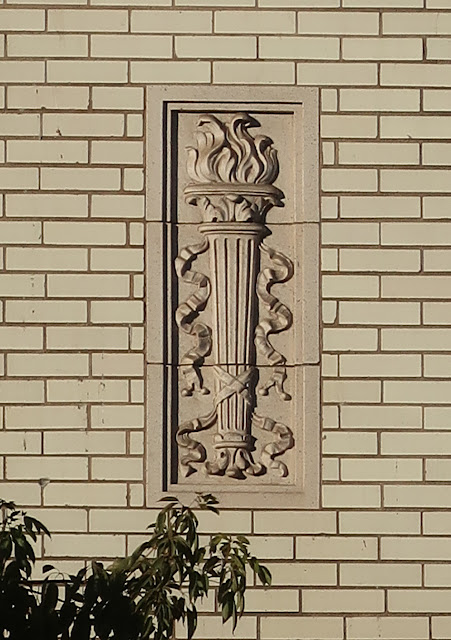 2020 - One of the only roof trusses still in place. Photo: Bill Counter 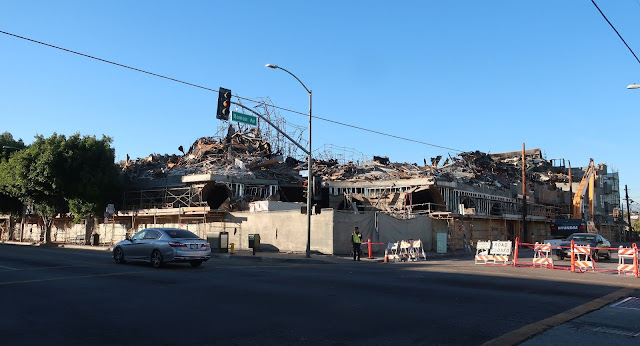 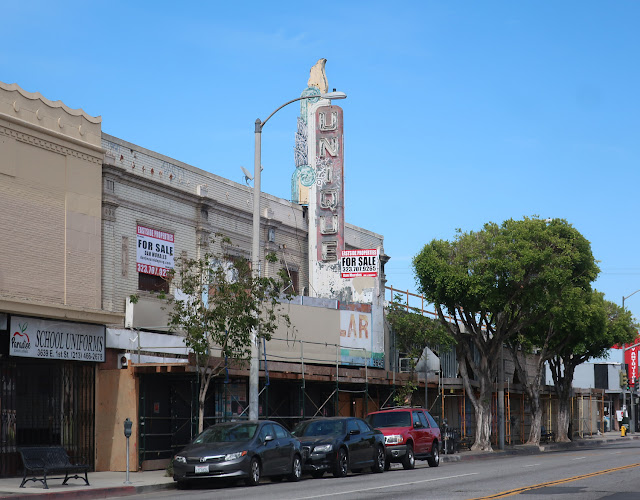 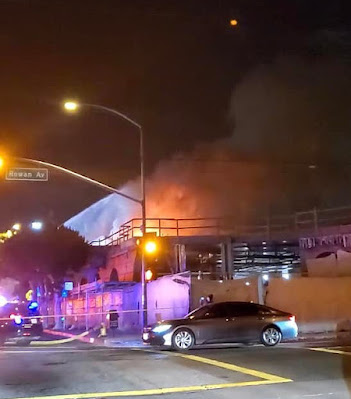 2022 - Another fire on the block the evening of April 19. Thanks to Andrew A. Boyle for posting this image taken by a friend as a comment to an Esotouric's Secret Los Angeles Facebook post. 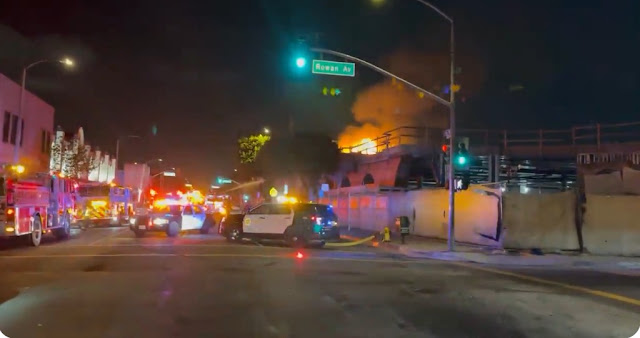 2022 - An image from a video clip posted by Lord Chize on Twitter. Thanks to Esotouric's Secret Los Angeles for sharing it on a second April 19 Facebook post.

More information: See the Cinema Treasures page on the Unique for all that is known about this venue.