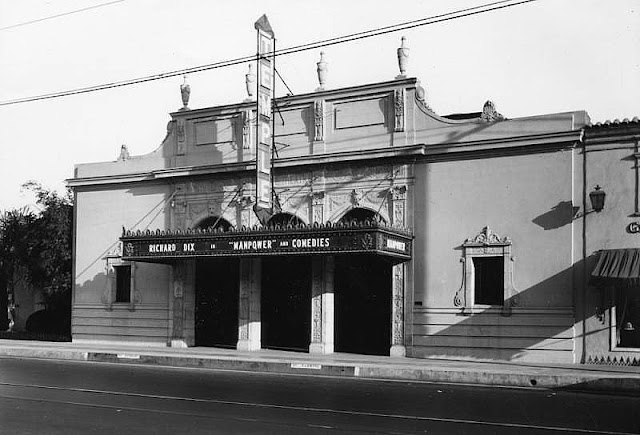 Opened: December 1921 as the Temple Theatre, owned by Walter Paul Temple. It was on the north side of the street just east of 4th St. The photo is from the Los Angeles Public Library collection. "Man Power" was a July 1927 release with Richard Dix and Mary Brian.

Architects: Walker and Eisen. Joe Vogel did the research: "Southwest Builder and Contractor of 6/3/1921 says that architects Walker (Albert Raymond) and Eisen (Percy Augustus) were preparing the plans for the theater. The building was to be 60' by 150' and would have a seating capacity of 800. The estimated cost was $50,000." 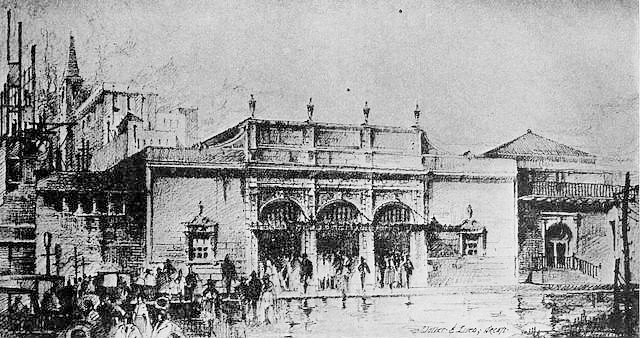 Thanks to Joe for locating this rendering for a post on Cinema Treasures. He notes: "This rendering of Walter Temple’s theater at Alhambra was published as part of a portfolio of the work of architectural firm Walker & Eisen in the October, 1922, issue of The Building Review."

Thanks to Joe Vogel for researching the opening. He reports: "The opening of this theater was announced in the Los Angeles Times issue of 12/25/1921, under the headline 'Mr. Temple’s new theater opens in Alhambra.' This was Walter Paul Temple, local landowner and developer, who would later develop Temple City. The paper also announced that the new theater would be leased by a Mr. O.H. Schleusener, who was already the manager of another movie house in Alhambra." 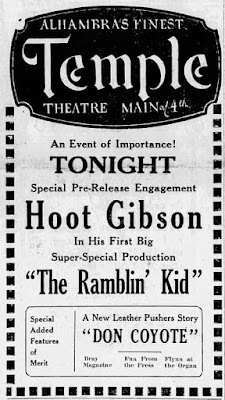 A 1923 ad for the Temple. Thanks to Ken McIntyre for locating it.

In the 1940s and 50s the theatre was operated by Fox West Coast. The Edwards circuit took over in the 60s and did a remodel which, among other things covered up the facade and replaced the marquee.

Closing: It was closed following damage from the 1987 Whittier Narrows earthquake.


Status: The building was demolished around 1990. 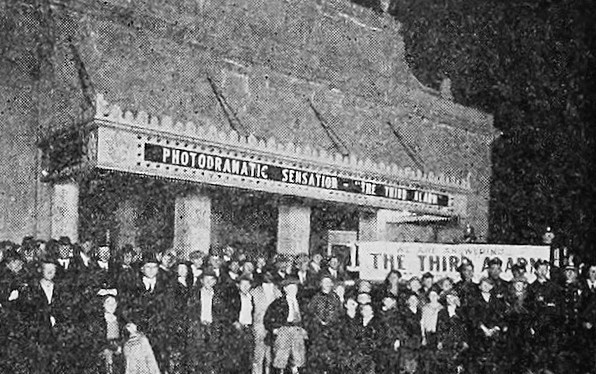 1923 - "We are showing The Third Alarm" says the banner. The December 1922 release starred Ralph Lewis, Johnnie Walker and Ella Hall. Thanks to Elmorovivo for locating the trade magazine photo for a post on Cinema Treasures. The original caption: "In front of the Temple Theatre, Alhambra, Cal., after the record dash of the firemen. Manager Rudy Schleusner did this stunt for 'The Third Alarm.'" 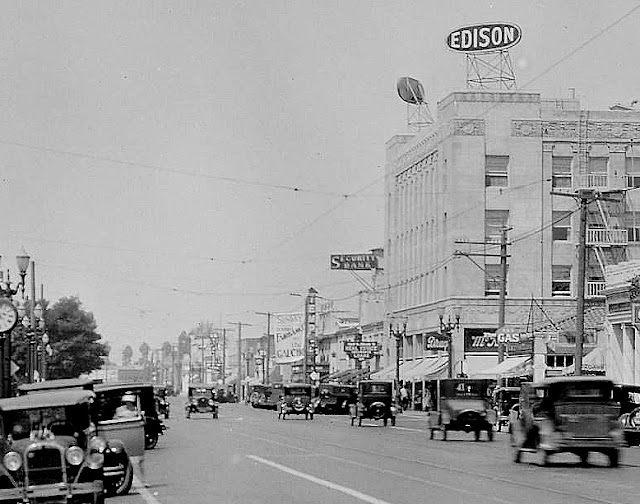 1928 - The Temple vertical and a banner for "The Gaucho" hung from it are in the center of this detail from a photo looking west that was taken by Harold A. Parker. It's from the Huntington Library collection. The full photo appears on the website of the Pasadena Digital History Collaboration. 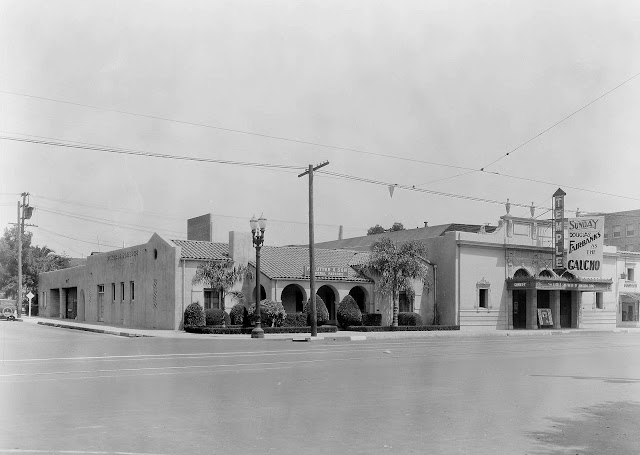 1928 - The theatre, again with the banner for "The Gaucho." The film had finished its twelve week run at the Chinese on January 22, 1928. It's another Harold A. Parker photo in the Huntington Library collection. That's 4th St. and a funeral parlor to the left of the theatre. 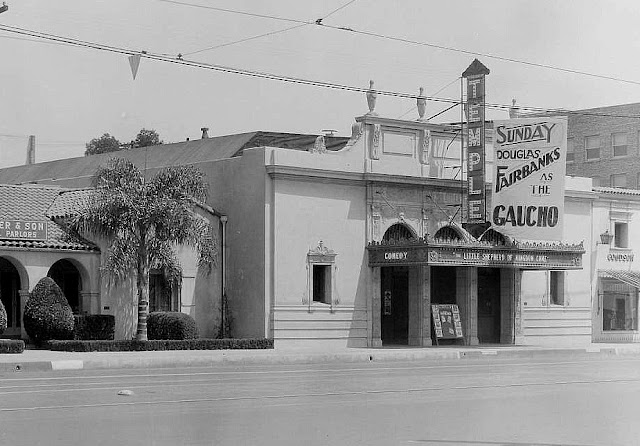 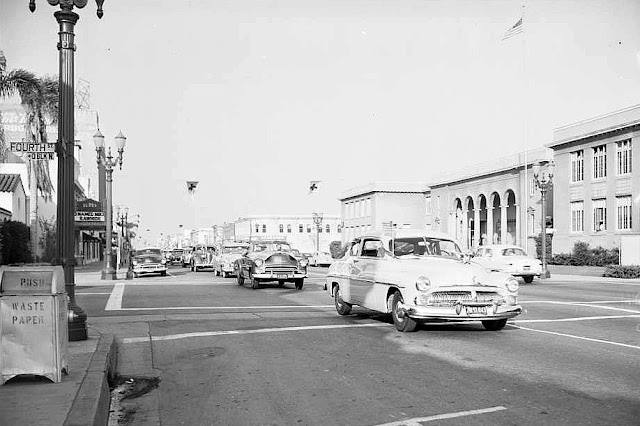 1951 - We get a glimpse of a replacement El Rey marquee in this photo looking east on Main St. It's a MacArthur "welcome home" parade. Thanks to Ken McIntyre for finding this in the Examiner Negatives Collection of the USC Digital Library. 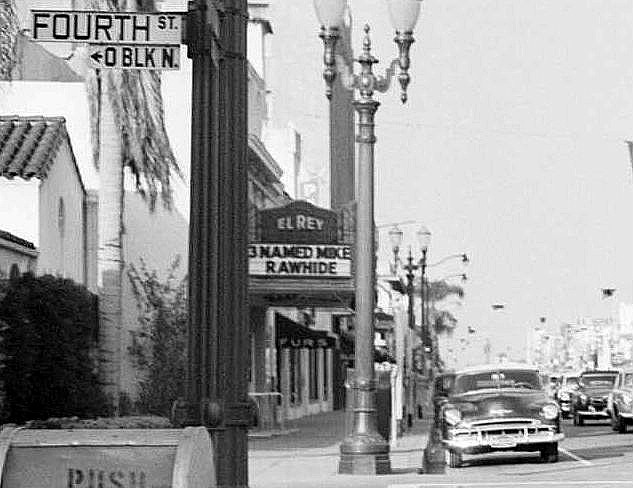 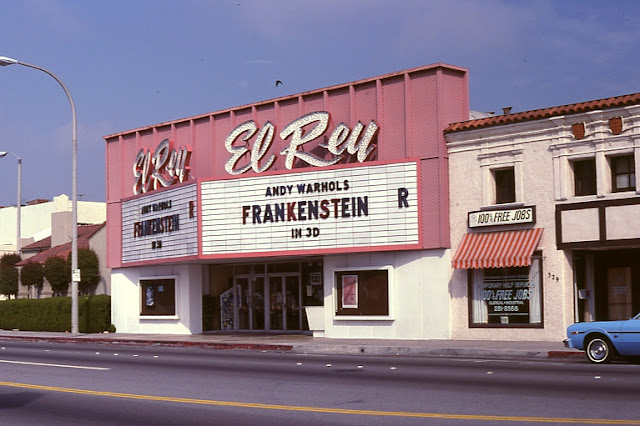 1973 - A view looking west showing the effects of the Edwards facade remodel. Thanks to American Classic Images for the photo from their collection. 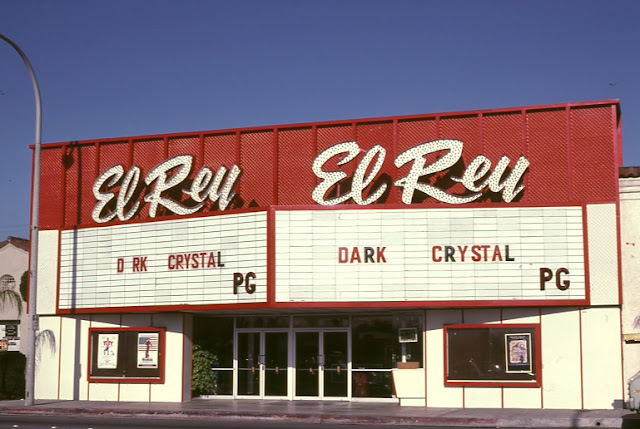 2019 - A look east across 4th St. The theatre was once over on the left just a bit beyond the corner. Photo: Google Maps

Also see the page here on this site for the Temple Theatre in Temple City, a 1940 S. Charles Lee building.