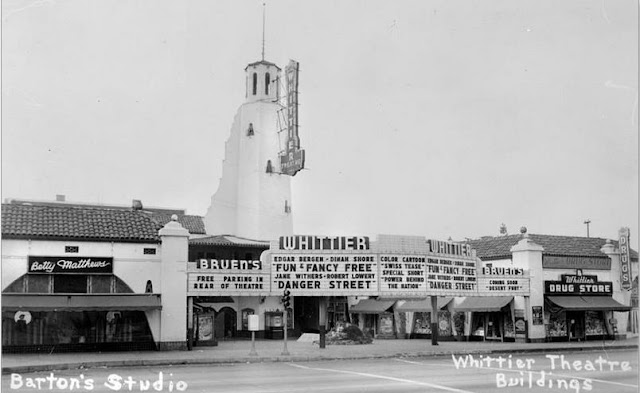 Opened: July 31, 1929 as McNees Theatre. The February 3, 1929 L.A. Times ran an article headed "Work Started on Whittier Theater," according to research by Joe Vogel. The opening attraction was "From Headquarters" with Monte Blue along with several vaudeville acts. The building had a full stage. Thanks to Ken McIntyre for finding the 1947 Barton's Studio card for a post on the Photos of Los Angeles Facebook page. It can also be seen on the Library of Congress website as part of the Historic American Buildings Survey materials.

The location was on the south side of the street where Whittier meets Hadley St. An old address for the building was 1410 W. Whittier Blvd. The street got renumbered. The complex was constructed on property that was once part of the McNees ranch. Whittier Amusement Co. was the building's initial owner.

Joe Vogel found a mention in the Los Angeles Public Library's California Index noting that the Whittier News reported on November 26, 1929 that the house would be reopening as the Warner Bros. Whittier. It's listed that way in the 1930/31 and 1932 Whittier city directories. 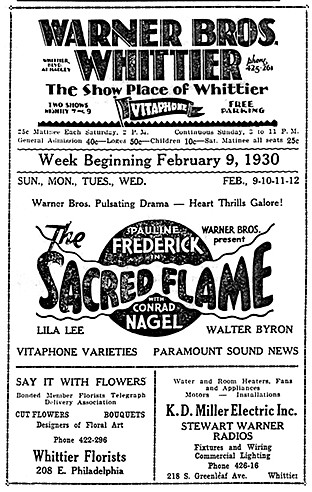 A February 1930 program cover for the theatre as Warner Bros. Whittier. It was reproduced in the October 1991 issue of the Tom B'hend publication Greater L.A. Metro Newsreel. The issue is in the Ronald W. Mahan Collection. Thanks to Ron for scanning the ad.

Pacific Theatres was the operator after October 1969. Doerken Properties was the landlord after July 1, 1987. In its final years, the Whittier was no longer getting first run bookings and was running as a bargain house.

The Historic American Buildings Survey had this to say about the theatre:

"The Whittier Theatre was the largest and most elaborate movie theater complex in Whittier. It was significant as an example of a local architect's interpretation both of the prevailing trend toward grand-scale movie palace construction and of the enormous popularity of the Spanish colonial architectural style in Southern California in the early 20th century. It was one of few motion picture theaters to have incorporated 'atmospheric' effects in the auditorium lighting to simulate sunset, moving clouds, and a starlit sky.
"Its tower was a local landmark, visible even from the Interstate 605 freeway, more than a mile to the west. For decades, the theater and its adjacent shops were part of the cultural life not only of Whittier but of the adjoining local communities as well. Throughout its history, the theater reflected national trends in family entertainment. Built during the era of the transition from vaudeville and silent films to 'talkies,' the theater experienced its golden years in the decades of the 1930s and 1940s, declining with the growing popularity of television and video rentals."

Architect: David S. Bushnell of Whittier designed the Spanish revival themed complex of shops around a patio that led back to the atmospheric theatre. The original construction budget was $160,000. Several years later Bushnell also designed the Wardman Theatre, now known as the Whittier Village Cinemas. S. Charles Lee was involved in a 1947 remodeling. 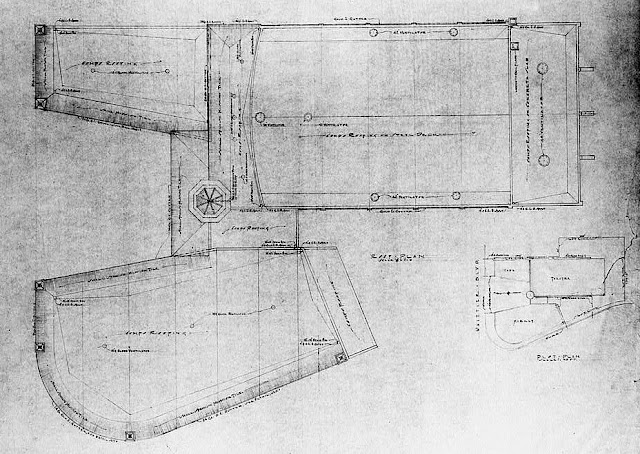 A plot plan of the complex. It's one of 17 pages of drawings and 35 photos from the Historic American Buildings Survey data about the theatre. HABS has a Whittier Theatre overview page on the Library of Congress website with links to the data pages and images. All the photos, except for the postcard at the top of the page and a 40s aerial view, are shots taken after the 1987 earthquake. 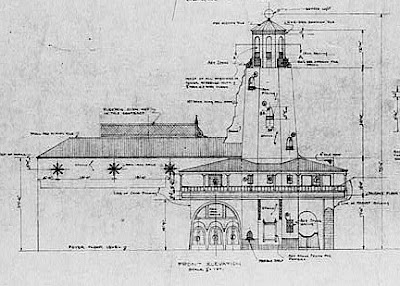 Bushnell's elevation of the tower and buildings in front of the theatre.

A drawing of the house left auditorium wall. HABS notes on page 7 of their data sheets that "the interior of the theatre was meant to evoke the courtyard of a Spanish hacienda, with stuccoed walls, ornamental tile and ironwork, balconies, and tile roof projections from the auditorium's side walls." They comment that the Whittier Daily News reported in a November 19, 1987 article that "the cloud machine apparatus that projected the atmospheric effects on the auditorium ceiling had not been working for several years, and many of the ceiling stars had disappeared."

Seating: 1,016, almost all on one level. There were two small private boxes on either side of the booth but not a real balcony.

Closing: It sustained some damage in the October 1, 1987 Whittier earthquake and didn't reopen following that. The consensus was that the building was eminently repairable.

Status: Old Spaghetti Factory was interested in moving in and the City of Whittier was going to buy the building. And then it fell apart. The owner preferred to redevelop the property with new strip mall buildings. The demolition didn't happen until four years after the earthquake.

The Whittier in the Movies: 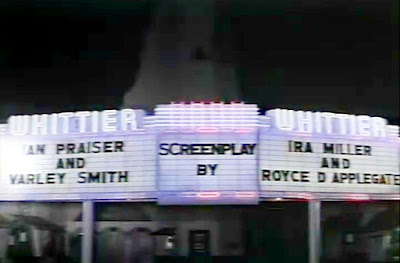 The marquee is seen in the opening credits of "Coming Attractions" (Cinema Finance Associates, 1978). Ira Miller directed the film, retitled "Loose Shoes" for a 1982 reissue. It's a comedy structured as a series of skits and trailers. Featured are Bill Murray, Buddy Hackett, Royce D. Applegate, Lewis Arquette, Tom Baker and Dorothy Van. See the Historic L.A. Theatres in Movies post for marquee shots of the La Reina, Wiltern, Palace, Orpheum and Rivoli in Long Beach. The Gilmore Drive-In is seen at the film's end. 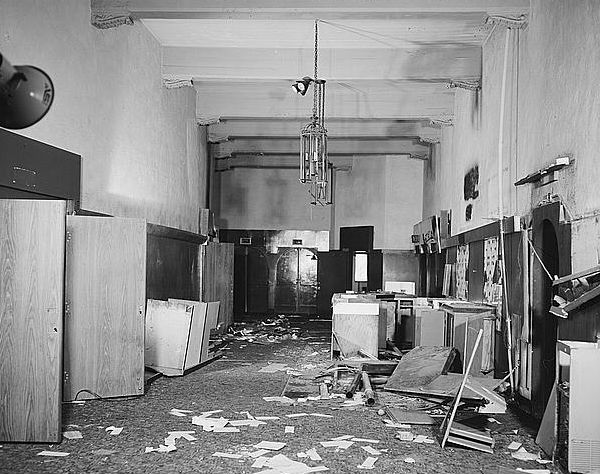 A 1988 look down the lobby with the snackbar straight ahead and the auditorium off to the left.  Photo: Library of Congress / HABS 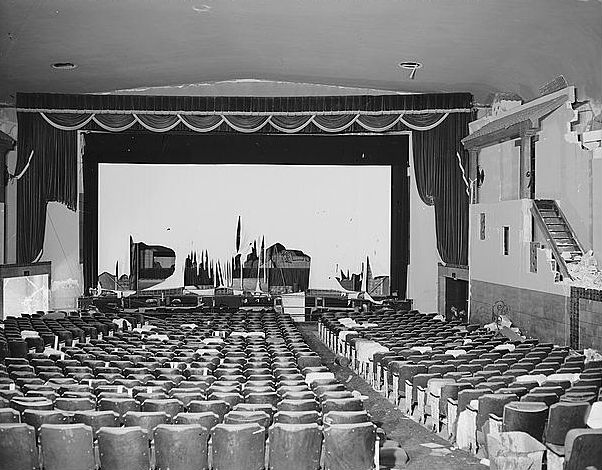 Looking toward the stage. Photo: Library of Congress / HABS - 1988 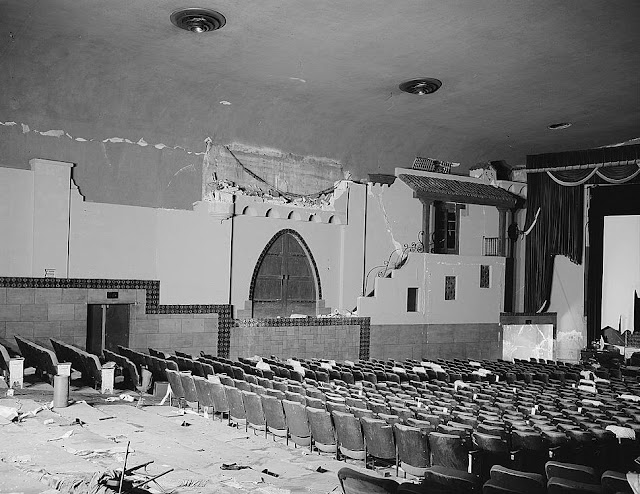 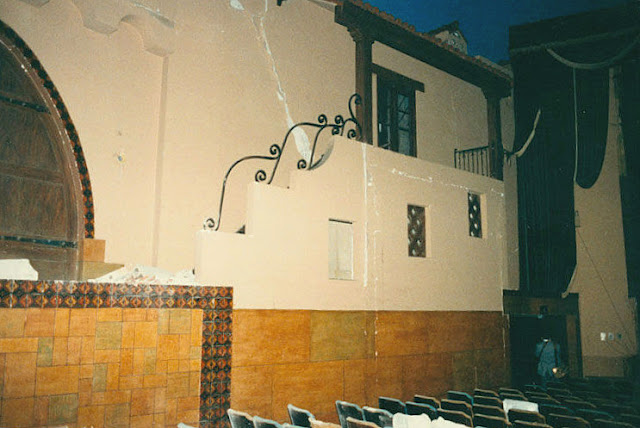 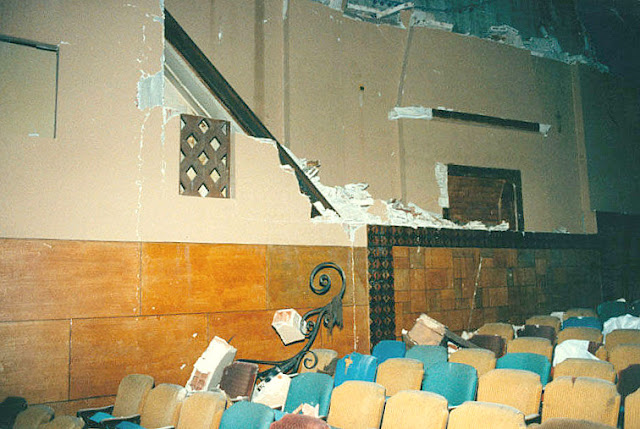 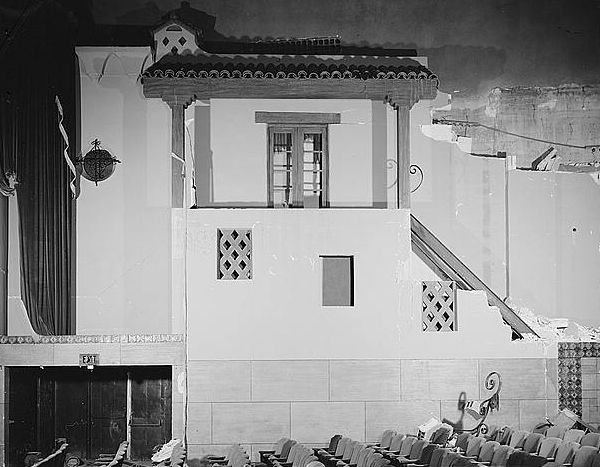 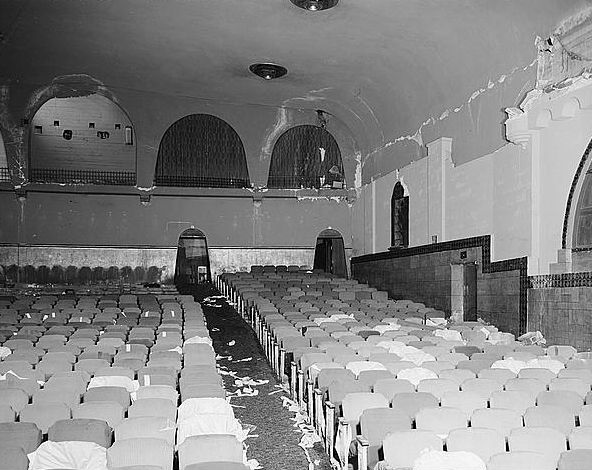 The rear of the auditorium. Photo: Library of Congress / HABS - 1988 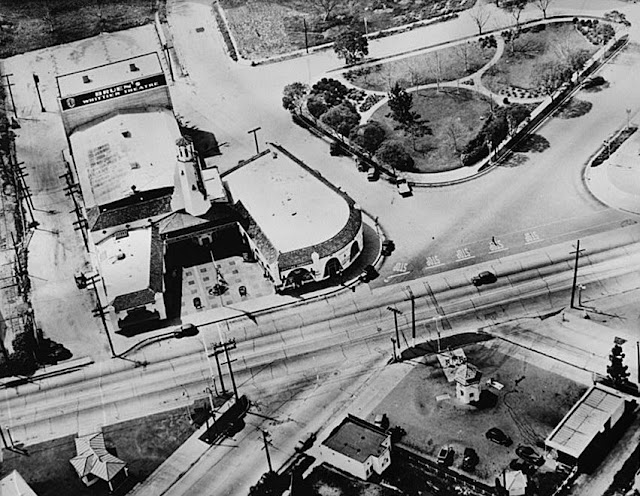 1940s - A fine view of the complex from the Library of Congress collection. Note at this point the theatre hadn't yet installed the marquee across the entrance to the forecourt. See the Historic American Buildings Survey (HABS) overview page about the Whittier Theatre on the LOC website for 53 photos and drawings of the theatre. 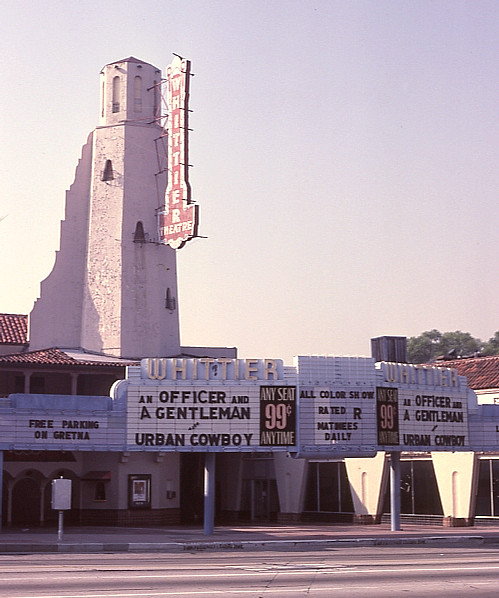 1983 - The theatre running "An Officer and a Gentleman" along with "Urban Cowboy." It's a photo from the now-vanished American Classic Images website. 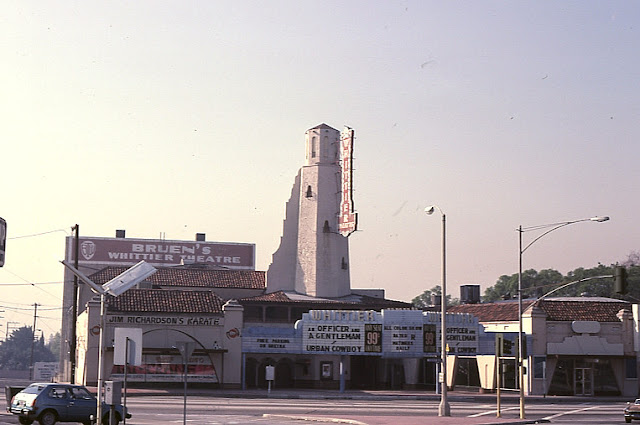 1983 - A wider view giving us a look at the stagehouse. It's another photo from American Classic Images. 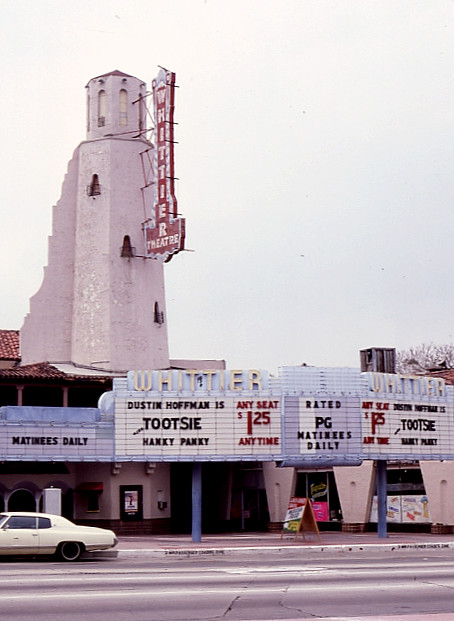 1983 - A "Tootsie" view that once appeared on the American Classic Images website. 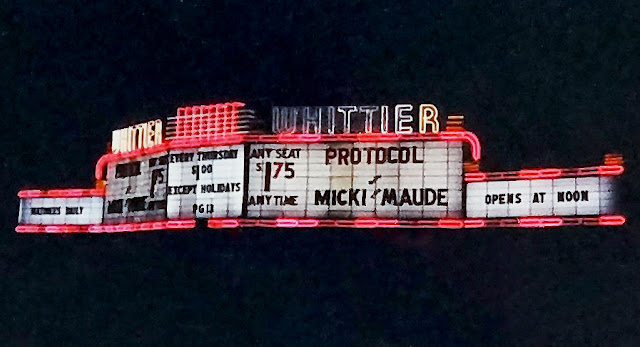 1984 - Thanks to Matt Spero for sharing this photo he took during the theatre's bargain house era. 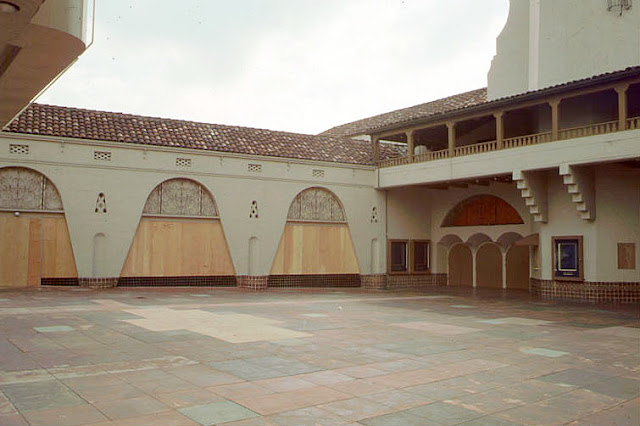 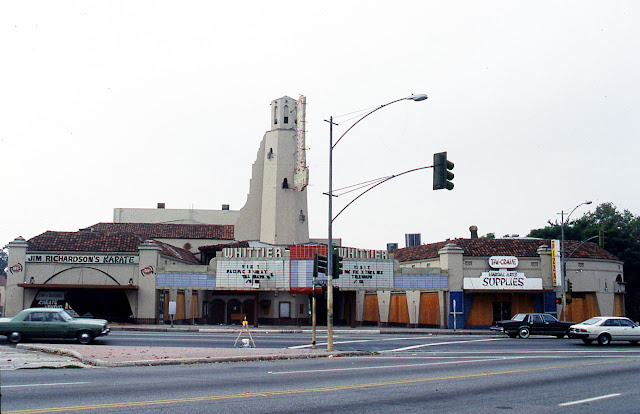 c.1987 - Thanks to Sean Ault for sharing this photo from his collection. The marquee copy is suggesting that we visit a nearby Pacific Theatres triplex. 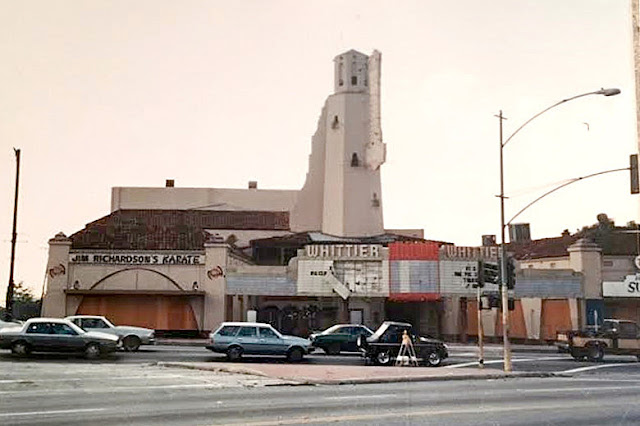 c.1988 - Thanks to the Whittier Daily News for this photo that appeared with Mike Sprague's 2017 story "Decades after 1987 Whittier Narrows earthquake, here are the parts of Uptown Whittier still recovering." 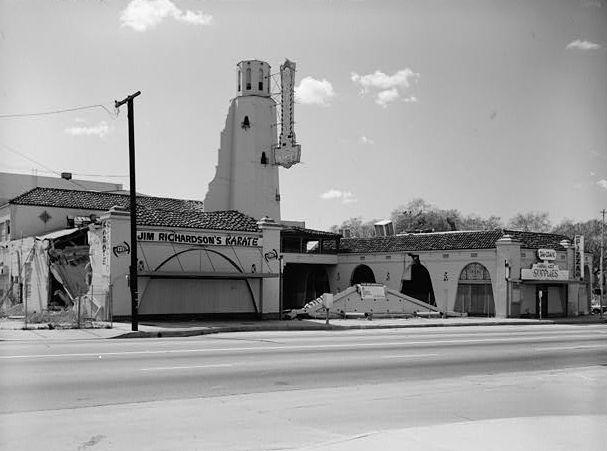 1988 - A view after the marquee was taken down. Photo: Library of Congress / HABS 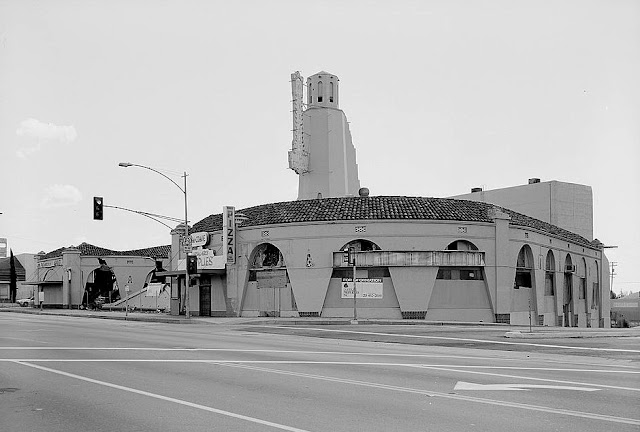 1988 - The Gretna Ave. side of the complex. Photo: Library of Congress / HABS 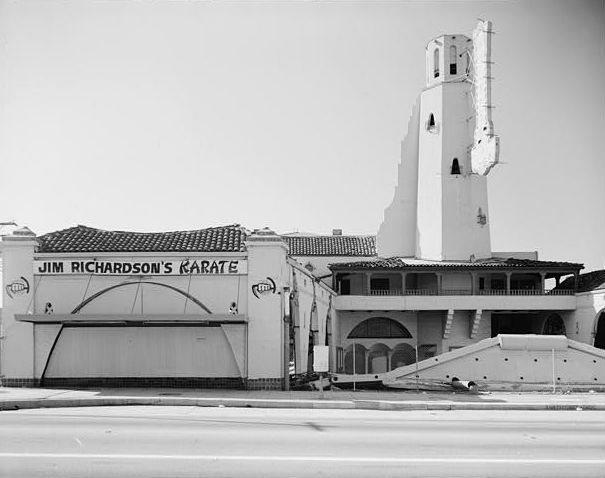 1988 - Looking into the forecourt. Photo: Library of Congress / HABS 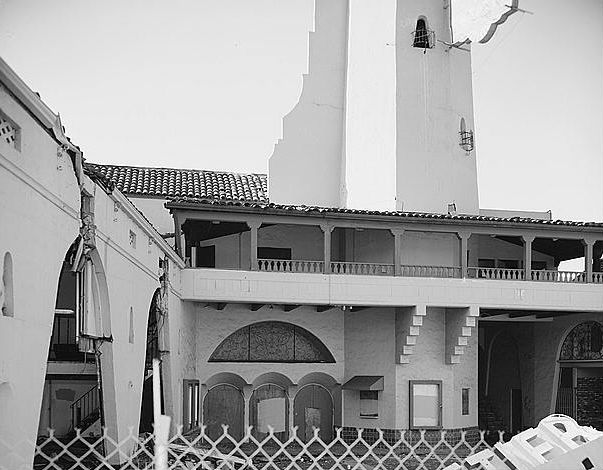 1988 - The boxoffice and entrance at the end of the forecourt. The stairs to the booth and private boxes can be seen through one of the arches on the left. Photo: Library of Congress / HABS

1988 - A look up the tower, still with its vertical sign. Photo: Library of Congress / HABS 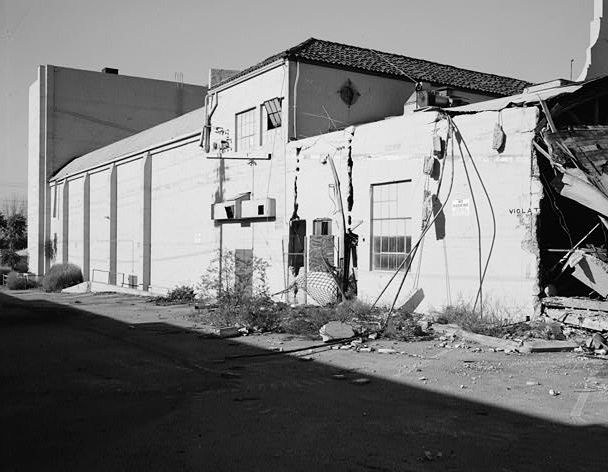 1988 - Along the east side of the building. Photo: Library of Congress / HABS 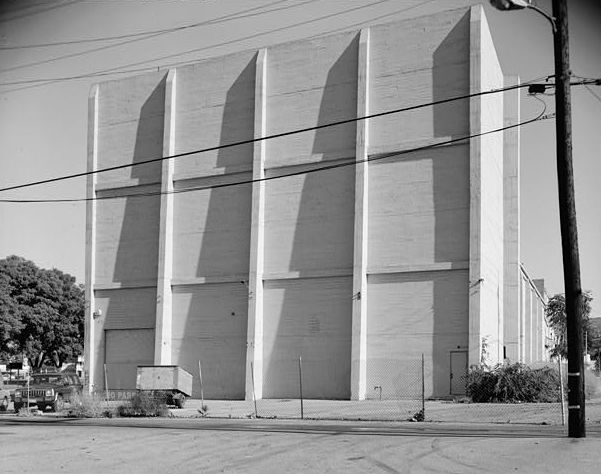 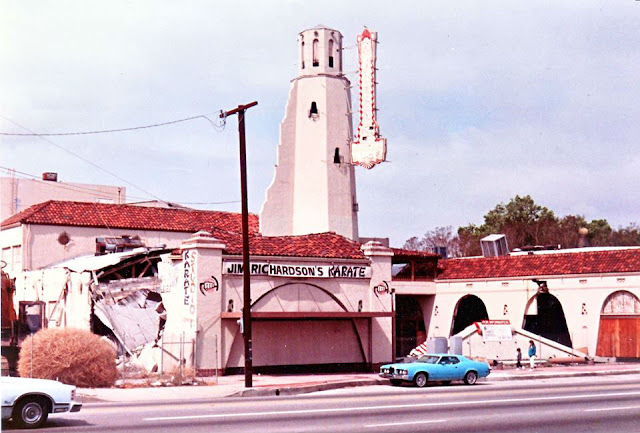 early 1990 -Thanks to Steven Otto for sharing his photo of the building awaiting salvation. The building wasn't saved despite having an interested tenant, Old Spaghetti Factory. It was demolished in 1991.

2019 - A lovely Walgreen's on the site. That's Hadley St. on the right. Photo: Google Maps

More information: See the Cinema Treasures page on the Whittier for many memories of moviegoing there.