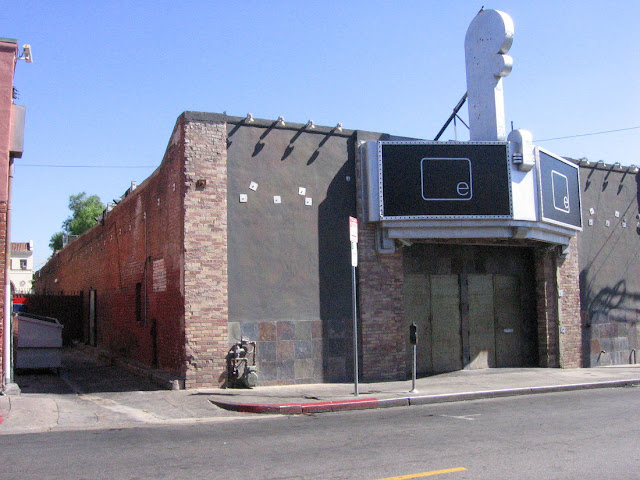 The Las Palmas Theatre has had a number of different lives since the 30s including stints as a legit theatre and movie house. It's now a music club. Photo: Bill Counter - 2007

Opened:  The building, originally a market, dates from 1927. It was remodeled in 1936 into a playhouse named the Hollywood Little Theatre. Joe Vogel, on Cinema Treasures, found a Daily Variety item noting that in June 1941 it was being called the Hollywood Troupers Theatre.

In 1943 it was branded Dante’s Troupers Theater for a run of about six months of the touring magic show "Sim Sala Bim" starring Dante (Harry Jansen).  By 1944 it had become the Playtime Theatre.  Sometime before 1947 it got the Las Palmas name. 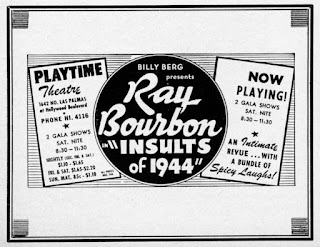 The delightful paper ephemera collection of Eric Lynxwiler on Flickr includes this ad for the revue "Insults of 1944" at the Playtime Theatre. The ad appeared in an issue of Playgoer magazine distributed at the Biltmore. Thanks, Eric!

The Las Palmas was a noted legit venue for many years. The Hume Cronyn production of Tennessee Williams' "Portrait of a Madonna" starring Jessica Tandy played at the theatre in the mid-40s.

A 1945 ad for something called "Strange Love Story." Thanks to Ken McIntyre for finding it for posting as a comment on the Facebook page Photos of Los Angeles.

In 1946 the Actors Lab leased the Las Palmas for productions of "Volpone," "Awake and Sing," "Home of the Brave" (with Barbara Bel Geddes) and Gogol's "The Inspector General."

In 1947 the theatre got a remodel and was then briefly a film house. Ken McIntyre found a mention in an LA Times article dated May 10: "...Reopening Thursday night as a picture theater in a blaze of glory and lights, with any number of film celebrities present, and with handsome new decorations and freshly upholstered seats, Las Palmas is showing 'Nais,' a French-made film with English subtitles adapted from Emile Zola’s 'Nais Macoulin.' Stars present at the premier included Claudette Colbert, Charles Boyer, Denise Billincord, J. Carrol Naish, Marla Montez, Robert Stack and others." 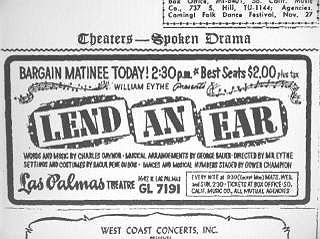 Carol Channing made her west coast debut at the Las Palmas in the 1948 revue "Lend an Ear," directed by Gower Champion. The show, with words and music by Charles Gaynor, also featured Gene Nelson. It later moved to Broadway playing for 460 performances and led to Channing's casting in "Gentlemen Prefer Blondes." Thanks to Ken McIntyre for finding this L.A. Times ad for the show. 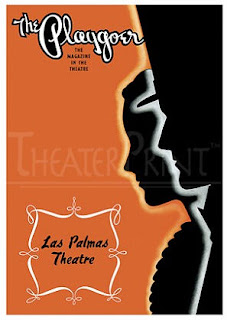 The program cover for "Lend An Ear," from the now-vanished site TheaterPrint. The next show up at the Las Palmas was "Tongue in Cheek," not a success.

Would you believe an ice show playing the theatre in 1949? Thanks to Ken McIntyre for finding this ad for "Icelandia." It was a post on Photos of Los Angeles. 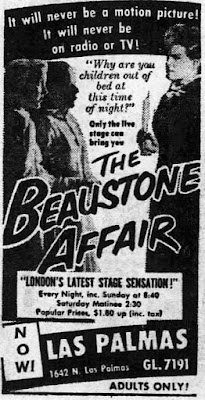 An ad for "The Beaustone Affair" in 1951. Thanks to Ken McIntyre for posting it on Photos of Los Angeles." Also in 1951 Arthur Kennedy took over the house for a repertory season. In 1954 the show "That's Life" had a good run.

"The Billy Barnes Revue" played the theatre in 1958. The show, with music and lyrics by Barnes, featured Joyce Jameson, Bert Convy, and Ken Berry. The L.A. run was followed by a transfer to Off-Broadway, then to Broadway (for 87 performances), then another Off-Broadway run.

Thanks to Steven Otto for remembering the 1974 first run booking of the John Waters film "Female Trouble at the Las Palmas. He found an article about the 1974 renovation and reopening written by Ralph Tribbey, at the time the VP of a small southern California theatre circuit of about 30 screens that had taken over the theatre. The president of the chain had, as Ralph says, "some interesting contacts in the entertainment business" and some "equally 'interesting' contacts when it came to taking over certain theatres." He tells the story in a post about the documentary "I Am Divine" on the blog DVD & Blu-Ray Release Report:

"....One such theatre that did come our way was the Las Palmas in Hollywood — between Hollywood Blvd. and Selma. At the time it was a gay porn venue of somewhat dubious operating procedures, but he [the company's president] envisioned this uniquely located cinema as being the west coast version of the Bleecker Street Cinema. It would become the greatest art house venue in Hollywood! We closed it down, cleaned it up and did a little remodeling. The day quickly came to reopen the place with the Hollywood premiere of 'Female Trouble,' directed by the cult filmmaker John Waters and starring the great Divine.

"Since the Las Palmas was destined to be the next Bleecker Street Cinema, it was decided that we’d rip a page from the playbook of the nearby Grauman's Chinese Theatre. A four-by-four foot chunk of sidewalk in front of the theatre was jackhammered out and four inches of fresh concrete was poured (all without permits) late in the afternoon on the day of the film’s grand opening. The plan was for Divine to place her hand and feet impressions in the fresh cement for future visitors to marvel at. It was a good plan, but …

"We got the necessary permit to have Las Palmas closed between Hollywood Blvd. on the north and Selma Avenue on the south. We even had a Klieg light rolled up in front of the place and as the sun set it lit up the sky … a large crowd of curious onlookers began to gather. Many more than anticipated!!! At the appropriate moment a trash truck lumbered up Las Palmas and stopped in front of the theatre. The hydraulics kicked in and the entire backend suddenly opened up to reveal eight Cycle Sluts — men dressed in leather, bustiers and fishnet costumes — who came pouring out and began dancing and prancing around the street. The crowd went wild. They would be the honor guard for Divine.

"Next came the limo with our honored guest. It pulled up in front of the theatre. One of the motorcycle cops, who we were required to have there to provide security, opened the door to her limo and out she stepped, turned … and walked right through the fresh cement! It was a disaster! No feet or hand impressions, but a path of complete destruction leading to the open doors of the theatre. I can, however, report that Divine was a good sport about it. The premiere went well, but alas the Las Palmas didn’t become the next Bleecker Street and we soon closed it up. Over the years it would become all sorts of things … eventually gutted and turned into different clubs." 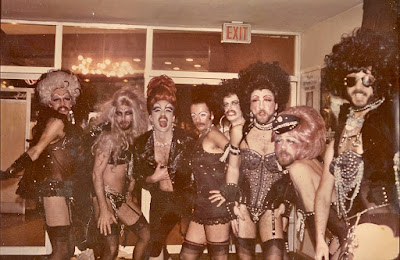 Cycle Sluts at the 1974 "Female Trouble" premiere. Thanks to Ralph Tribbey for the photo.

Other productions in the 80s included Sam Shephard's "True West" starring Randy and Dennis Quaid, "The Normal Heart" starring Richard Dreyfuss, Tom Topor's play "Nuts," and Christopher Durang's "Sister Mary Ignatius Explains It All For You." It was later used as a music club by a number of different operators.

The data is from the 1949 ATPAM Theatre, Arena and Auditorium Guide. Thanks to Bob Foreman for posting the contents of the book on his blog Vintage Theatre Catalogs.

The Las Palmas in the Movies: The theatre is seen in the Carlos Tobalina film "Refinements in Love" (Hollywood International Pictures, 1971). A scene in front of the theatre with a crowd watching fire dancers perform gives us a look at the marquee advertising "I Am Curious Tahiti," another Tobalina film. Thanks to Scott Favareille for the data. 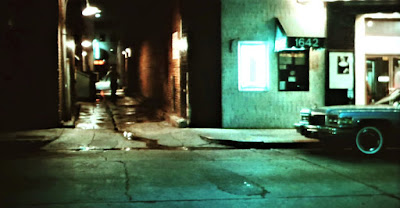 The final shootout in Robert Vincent O'Neill's "Angel" (New World, 1984) takes place in the alley just north of the Las Palmas. Here we see the theatre with posters up for "Sister Mary Ignatius Explains It All For You." Shooting was in the summer of 1983. The film stars Donna Wilkes as fifteen year old Molly, a high school student by day and working the street at night. Cliff Gorman, Dick Shawn, Rory Calhoun and John Diehl are also in this tale of a killer preying on teenage hookers. See the Historic L.A. Theatres in Movies post for a dozen shots from the film including glimpses of the Chinese, Vogue, Hollywood, Warner, Pantages, Cave and X theatres. 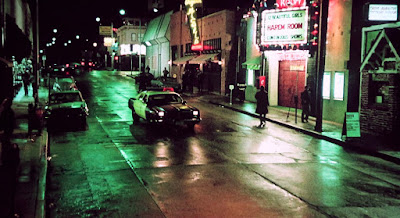 The theatre appears as the Harem Room where a stripper played by Claudia Christian works in “The Hidden” (New Line Cinema, 1987). She goes on a rampage and is evading the police. Her body has, of course, been taken over by an alien creature who will soon migrate to yet another body. Jack Sholder directed the film starring Kyle MacLachlan and Michael Nouri. See the Historic L.A. Theatres in Movies post for three more Las Palmas shots as well as views of the Westlake, the Pantages, the Palace and the United Artists. Thanks to Don Solosan for the data on this one.

Status: The theatre is now back in business (again) as a nightclub called Sound. 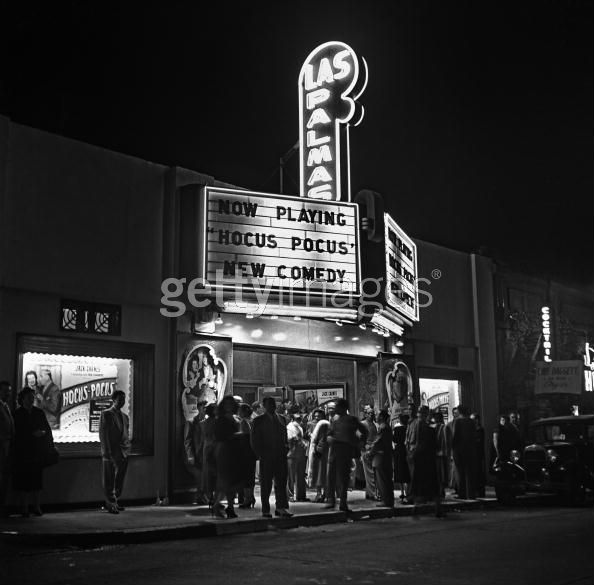 A 1951 Michael Ochs view of the Las Palmas at night. The photo is from Getty Images. It's also indexed on Google Images. 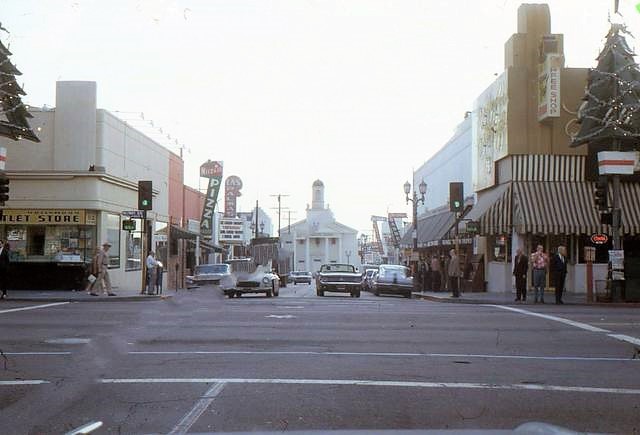 A mid-60s look down Las Palmas Ave. from Hollywood Blvd. It's a photo by Kolchak Ans that once appeared on the Facebook page Photos of Los Angeles. Thanks to David Zornig for spotting it and including it on the Cinema Treasures page on the Las Palmas. 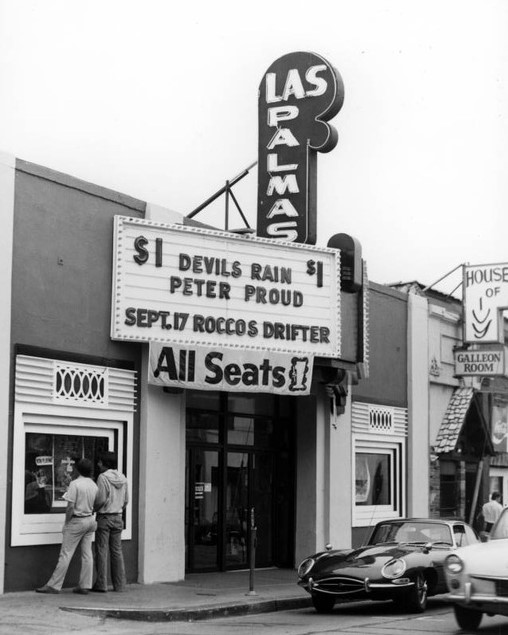 A photo of the theatre in the 70s thanks to Cinema Treasures contributor Granola. It's on the site's page about the Las Palmas. 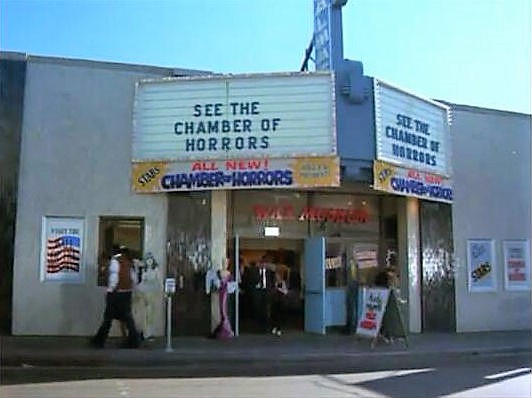 Thanks to Ken McIntyre for this shot of the Las Palmas on Photos of Los Angeles. And thanks to Royce for commenting that it dates from 1980 when the theatre was dressed for the TV move "The Munsters' Revenge." 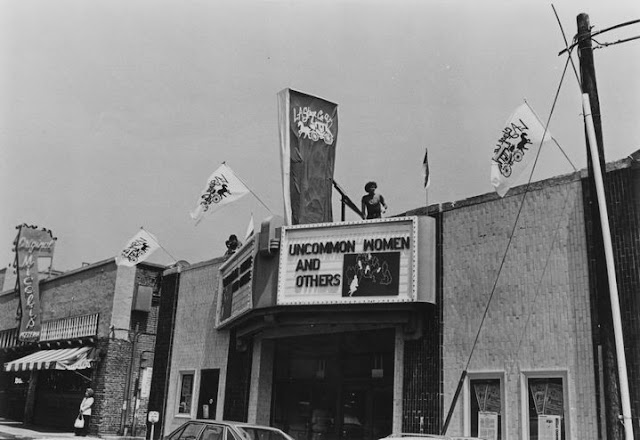 A 1982 photo taken when the L.A. Stage Co. was mounting their productions at the Las Palmas. Thanks to the amazing Bruce Torrence Hollywood Photograph Collection for the photo. Also in the collection is a 1972 facade view. 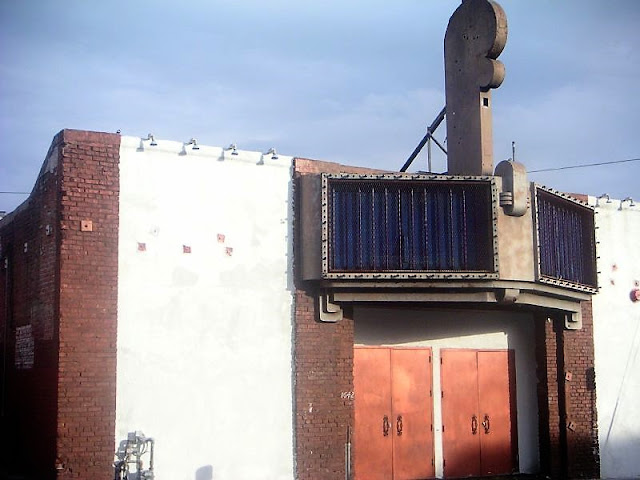 The theatre in 2005. Thanks to Ken Roe for his photo on Flickr. 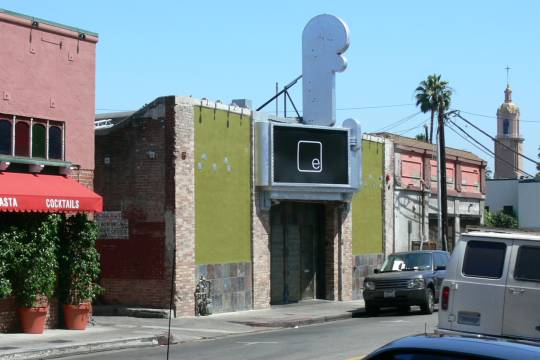 Thanks to Toomas Losin for this 2006 photo, appearing on his web page Angel Filming Locations Part 3, about theatres appearing in the 1984 film "Angel." 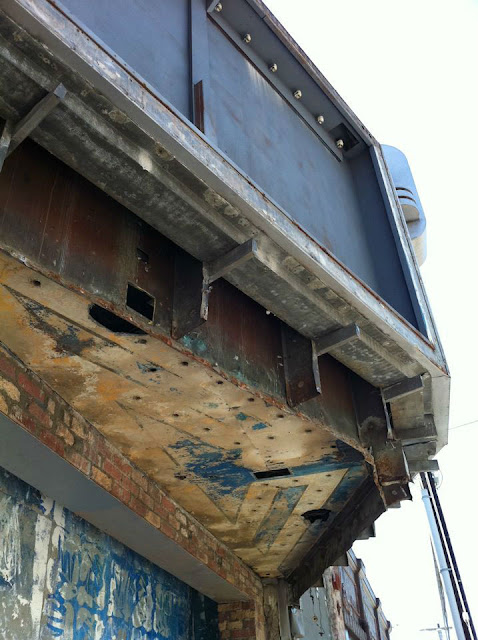 The marquee soffit in 2012. It's a Ken McIntyre photo on the Facebook page Photos of Los Angeles. 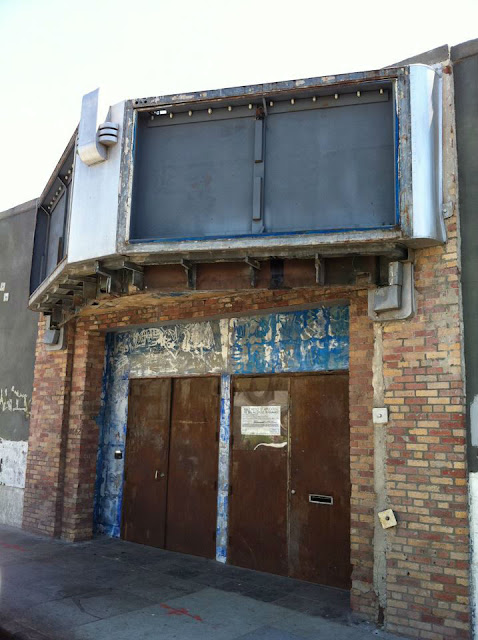 An entrance view with the building between tenants. Thanks to Ken McIntyre for the 2012 post on Photos of Los Angeles. 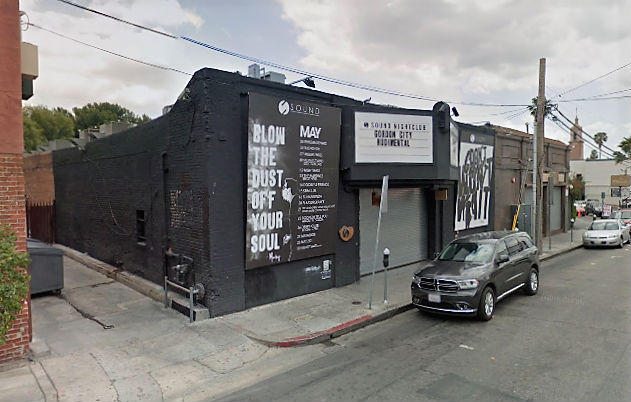 The theatre as the Sound nightclub. It's a May 2016 Google Maps view. Head there for the interactive version.