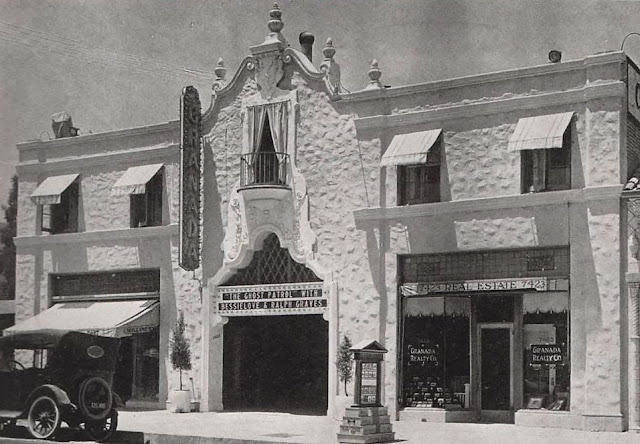 Architects: Meyer & Holler designed the theatre in a fanciful Spanish style befitting its original name, the Granada. Meyer and Holler were better known for their work on Hollywood Blvd. for Sid Grauman at the Egyptian and the Chinese. They also did the amazingly gaudy West Coast Theatre in Long Beach. 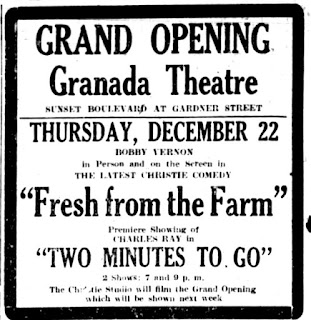 An ad that appeared on December 21, 1921, the day before the opening. Thanks to Mike rivest for locating it.
In the late 20s it was an operation of the West Coast Theatres circuit. Joe Vogel on Cinema Treasures notes it was listed as the West Coast Hollywood Theatre in the 1929 city directory. By 1932 it had become the Oriental. 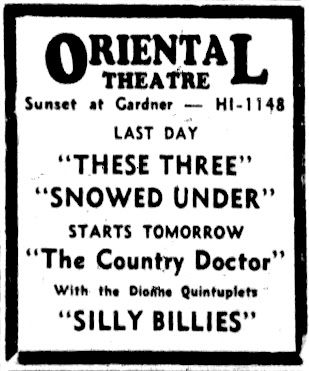 A May 30, 1936 ad from the Hollywood Citizen-News. Thanks to William David French, Jr. for locating it. He went on a search of this particular double bill the theatre was running at the time of a 1936 photo that's seen lower on the page.

Closing: The theatre closed in January 1985.

Status: It's been remodeled into retail space as part of the Guitar Center complex. 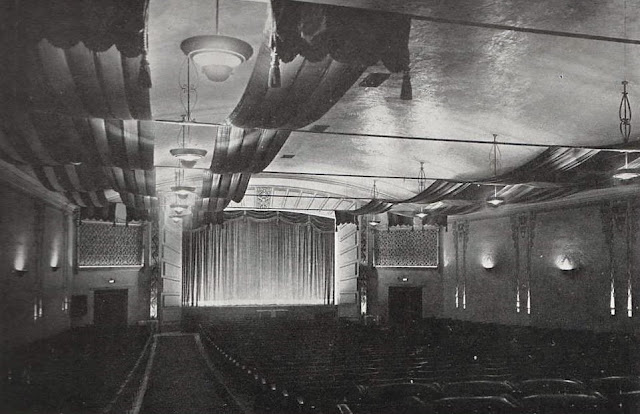 A c.1923 view from page 161 in the first volume of "American Theatres of Today" by R.W. Sexton and B. F. Betts. The two volumes of the book were published in 1927 and 1930 by the Architectural Book Publishing Co, New York. It was reprinted in one volume in 1977 by the Vestal Press, New York. 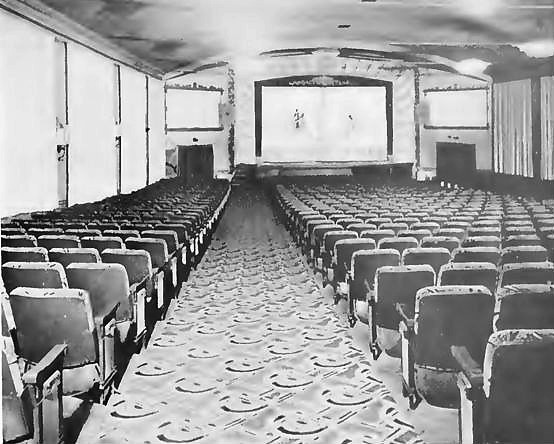 A look down the aisle in a photo from an article on floor coverings in the April 1, 1939 issue of the trade magazine Boxoffice. The caption read: "Tasteful modernism in aisle carpet provides excellent background for ushers' flashlights in the Oriental Theatre in Los Angeles. Aisle floors are one spot in a theatre's interior which the patron always sees, whether or not house lights ever go up between performances." 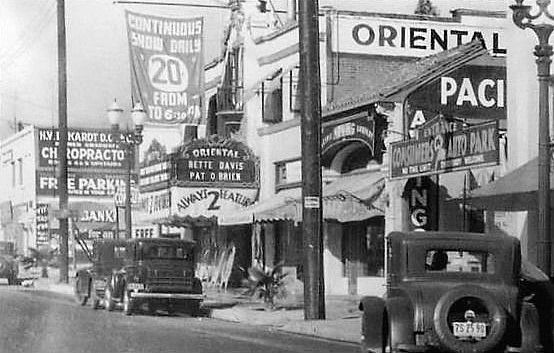 1932 - A photo showing off a new deco marquee that appears in "Theatres In Los Angeles" by Suzanne Tarbell Cooper, Amy Ronnebeck Hall and Marc Wanamaker. The 2008 book is from Arcadia Publishing. There's a preview to browse on Google Books. The photo has also been seen on Photos of Los Angeles and Ethereal Reality's Noirish Los Angeles post #8390. 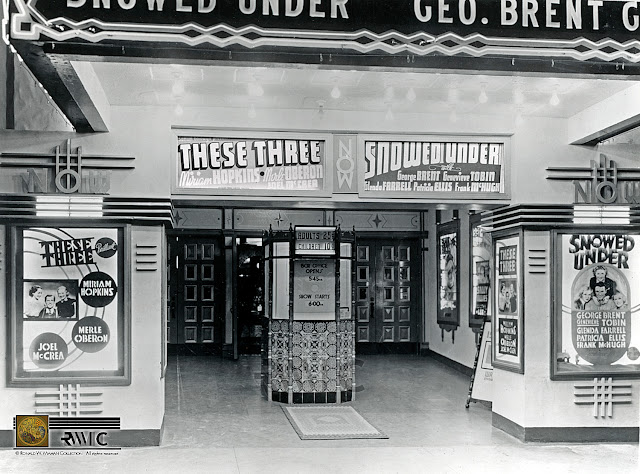 1936 - The theatre running "These Three" and "Snowed Under" after a bit of a deco re-do of the display cases. It's a photo from the Ronald W. Mahan Collection that had been unidentified until William David French, Jr. deduced where it was taken. He commented on a post of the photo on the Los Angeles Theatres Facebook page:
"It was the distinctive wall texture to the left of the marquee that caught my attention. Then the shape of the booth. Then the trim above the poster boxes. Surprisingly that double bill wasn't common. I searched L.A. area movie listings and this was the only one."
Also note that the neon trim along the bottom of the marquee matches the style seen in the 1932 photo. 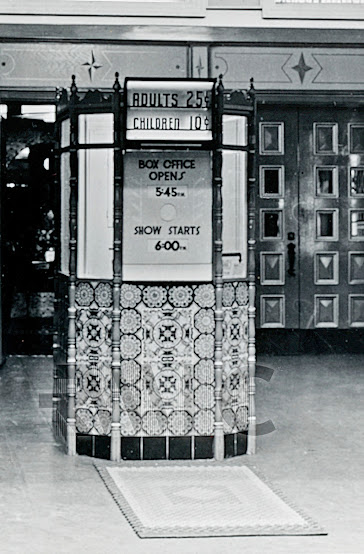 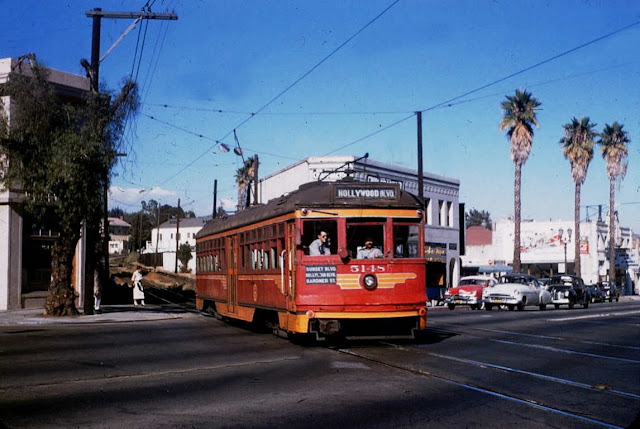 1954 - A Red Car view looking east on Sunset toward the Oriental, on the far right. It's an Alan Weeks photo. Thanks to eminent L.A. transit historian Sean Ault for finding it. 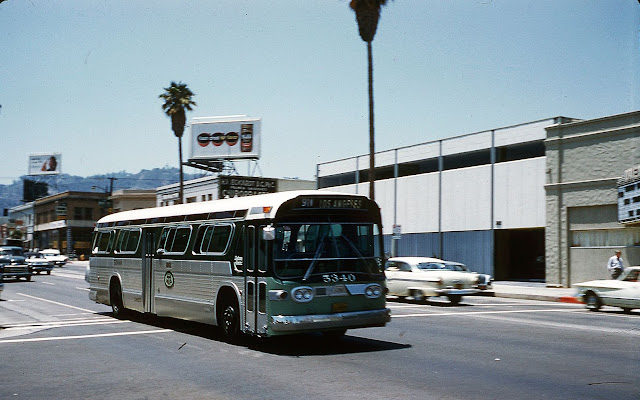 1960 - Looking west on Sunset with a bit of the Oriental on the far right. Thanks to Sean Ault for sharing the photo from his collection. 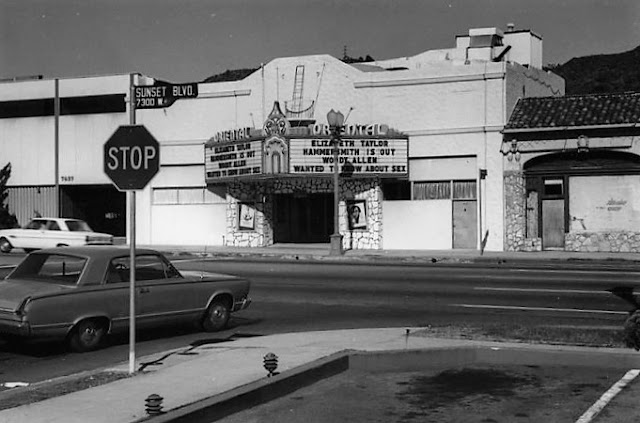 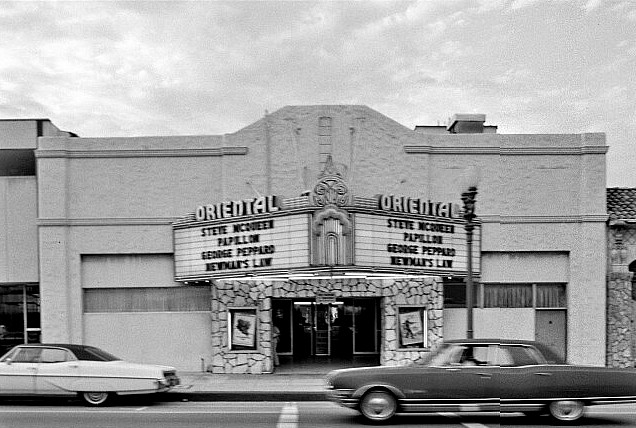 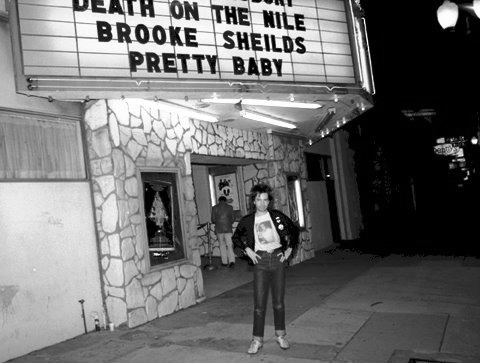 c.1978 - Rodney Bingenheimer in front of the Oriental Theatre. Thanks to Ken McIntyre for finding the shot for a post on the Facebook page Photos of Los Angeles. 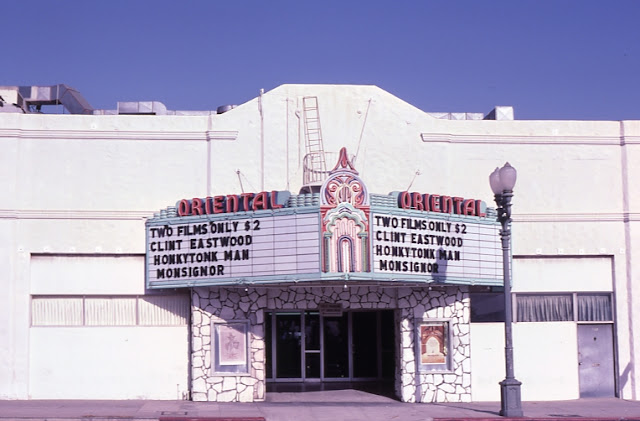 1982 - The facade as seen in a photo from the now-vanished American Classic Images website. 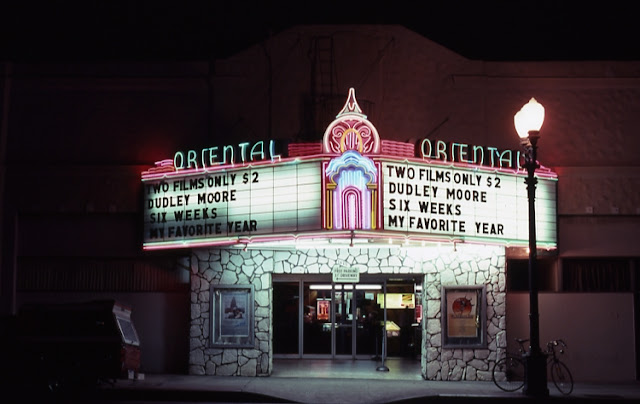 1983 - Thanks to American Classic Images for this lovely look at the neon. 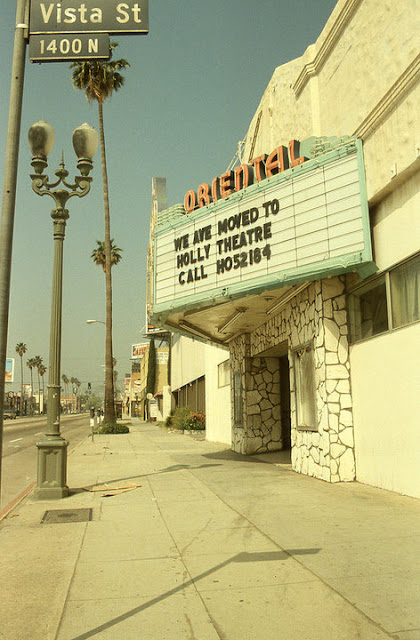 1985 - The Oriental after its closing. Thanks to Maurice Ideses for the photo, a post of his on the Facebook page Mid Century Modern. The structure of the theatre still exists but has been remodeled as part of the Guitar Center and is now unrecognizable. 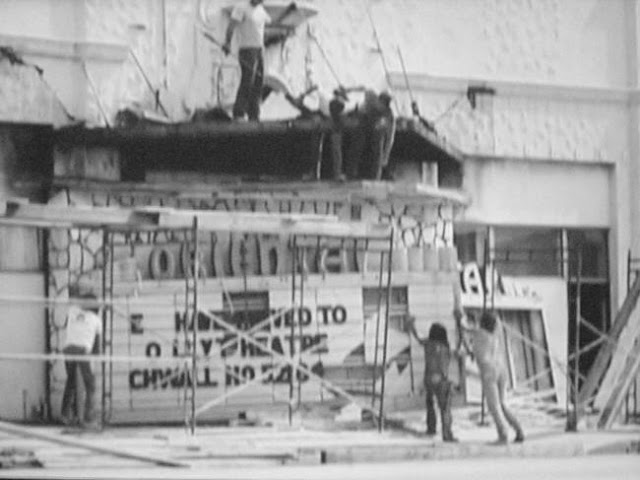 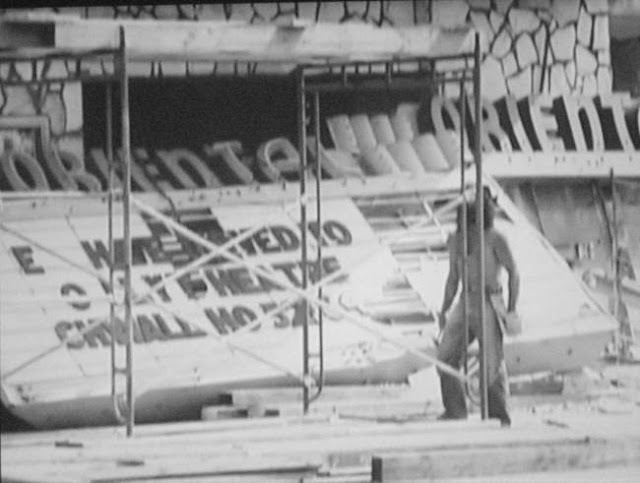 c.1986 - Another marquee demolition shot by Gary Graver. He was a filmmaker and cinematographer who took many photos of theatres in Los Angeles. See the Wikipedia profile on Mr. Graver, who died in 2006. More of his photos photos can be seen on You Tube: "Second Run - part 1" and "Second Run - part 2." Thanks to Sean Graver for use of the photos. 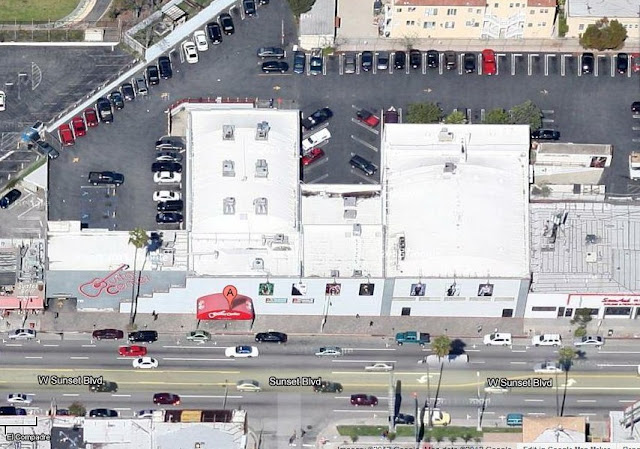 2008 - A Google aerial view with the Oriental portion of the Guitar center complex directly behind the red awning where the "A" marker is.  Thanks to Noirish Los Angeles contributor Ethereal Reality for the image. It and other Oriental Theatre items appear on his Noirish post #8348. 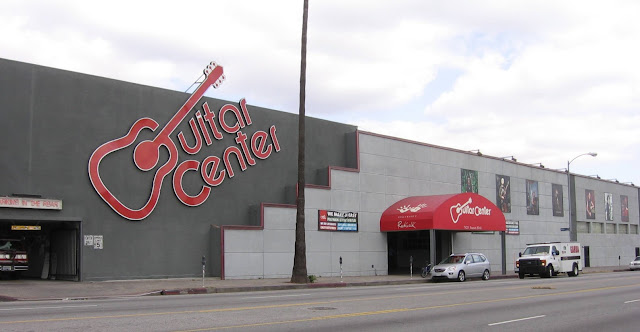 2010 - The structure is still there but the theatre has been swallowed up and made into part of a larger complex. The rear room for vintage guitars still shows the proscenium area. The only other visible theatre remnants are some original plaster and moldings across the ceiling near the proscenium. The booth area can also be visited.  Photo: Bill Counter

The Oriental in the Movies: 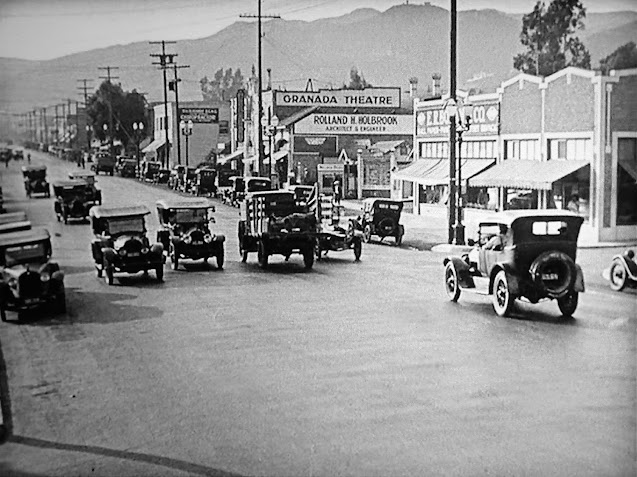 Toward the end of Harold Lloyd's "Girl Shy" (Harold Lloyd Co. / Pathé, 1924) we get this shot of the side of the Granada as we head west on Sunset. Harold is using all available means of transportation on a wild ride into the city from his small town to prevent a marriage between the woman he loves and a cad who happens to be already secretly married. See the Historic L.A. Theatres in Movies post for shots from the film of the 1st Culver City Theatre and the five theatres on the 800 block of Broadway. 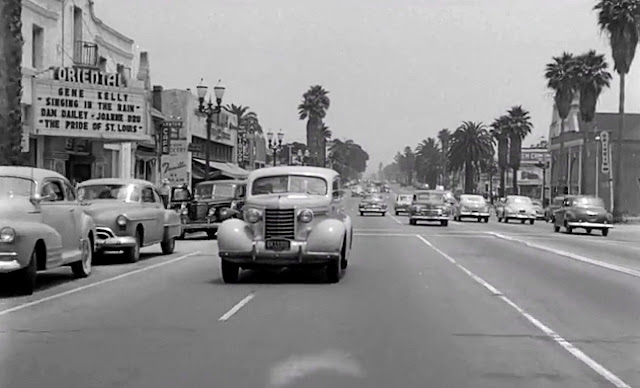 We get a fine look at the theatre 5:54 into nearly a nearly 11 minute drive west on Sunset Blvd. that was shot in 1952 for process photography work. Thanks to Rick Prelinger for posting the footage on Internet Archive. A colorized and remastered version is on YouTube. The Oriental was running "Singin' in the Rain" and "The Pride of St. Louis." Bruce Kimmel notes that this program had a one week run beginning June 11. 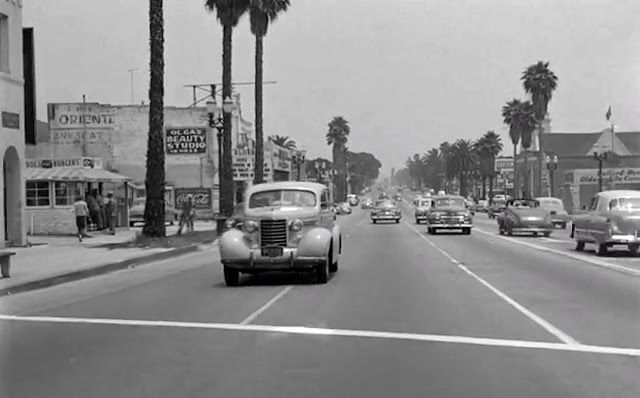 A view a moment later from the 1952 Rick Prelinger footage. Thanks to Esotouric's Secret Los Angeles for spotting the Prelinger post and putting the screenshots on the LAHTF Facebook page. Mary Mallory also shared a link to the footage on the Hollywood Heritage Facebook page. 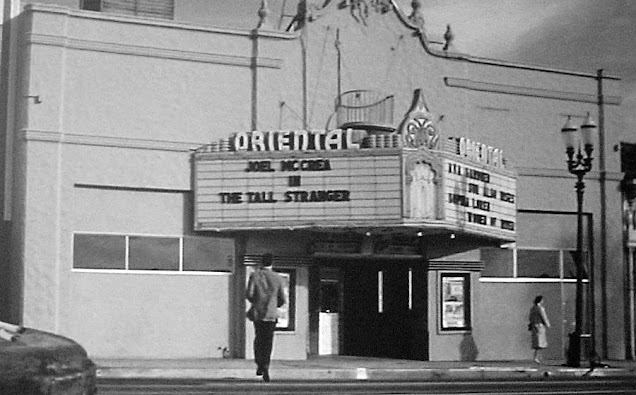 In the great 1958 Allied Artists epic "Unwed Mother" we get Robert Vaughn crossing the street to the Oriental for a holdup. 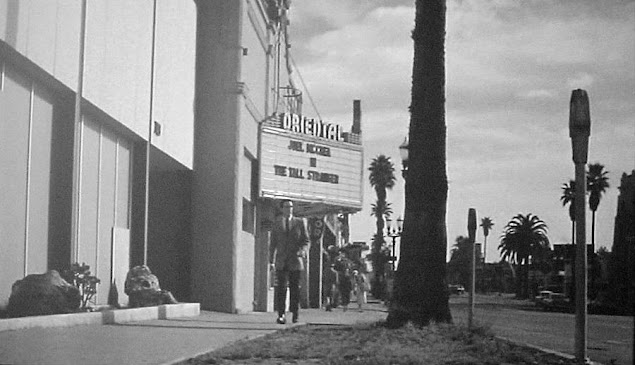 Looking east after the deed.  We see the cashier hitting the button on the floor of the boxoffice to summon the police. It doesn't go well. The car won't start and he gets caught.

The Oriental on TV: 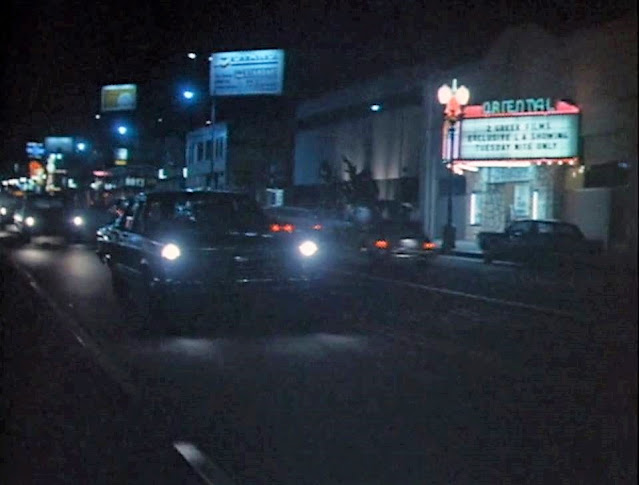 Thanks to Walter Santucci for this screenshot from an episode of Dragnet. Our correspondent Rick notes that it's from "The Grenade," the first episode of "Dragnet 1968," the show's second season. The episode first aired September 14, 1967.