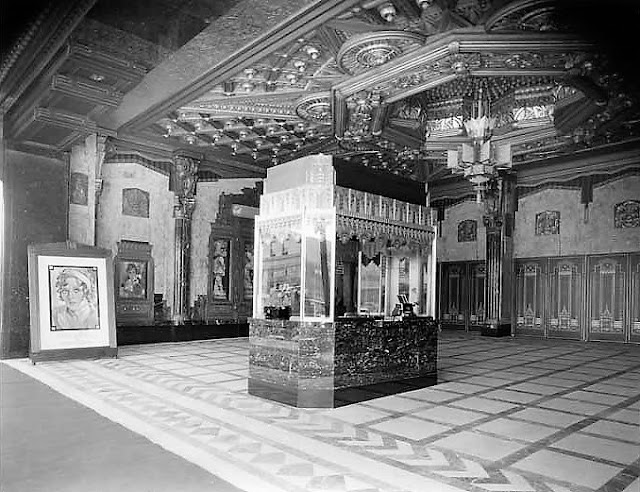 1930 - A boxoffice view. It's a Mott Studios photo in the California State Library set # 001387245.  The photo also appears in the Los Angeles Public Library collection. 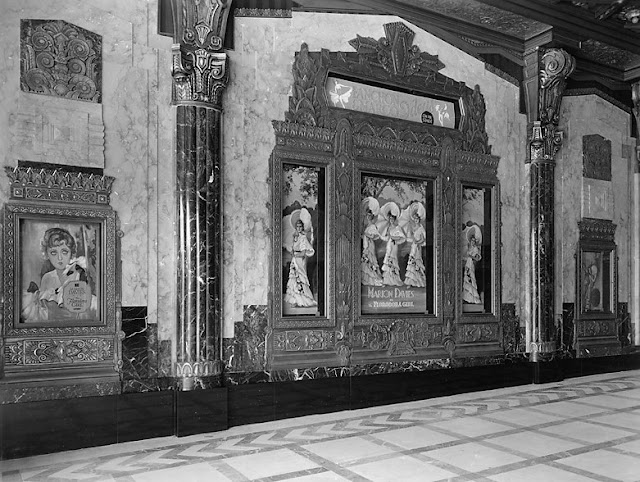 1930 - The display cases on the west wall of the ticket lobby. They're advertising the theatre's opening attraction, "The Florodora Girl" with Marion Davies. It's a Mott Studios photo in the California State Library set # 001407732. The photo is also in the Los Angeles Public Library collection and in the AMPAS Tom B'hend - Preston Kaufmann Collection. 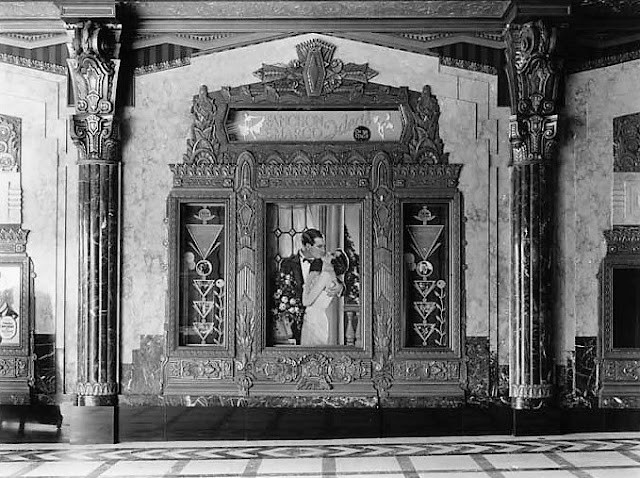 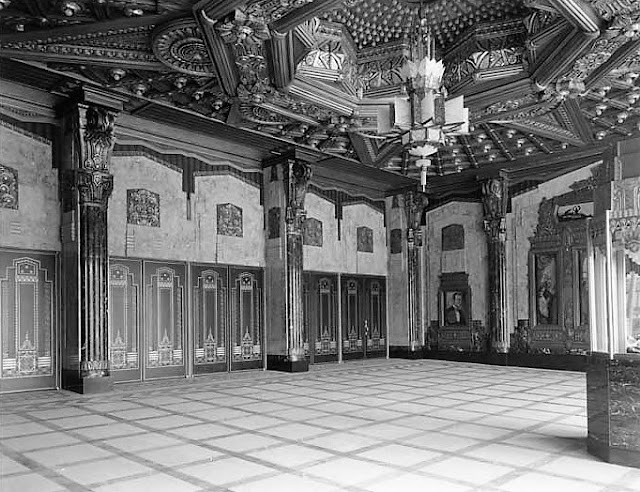 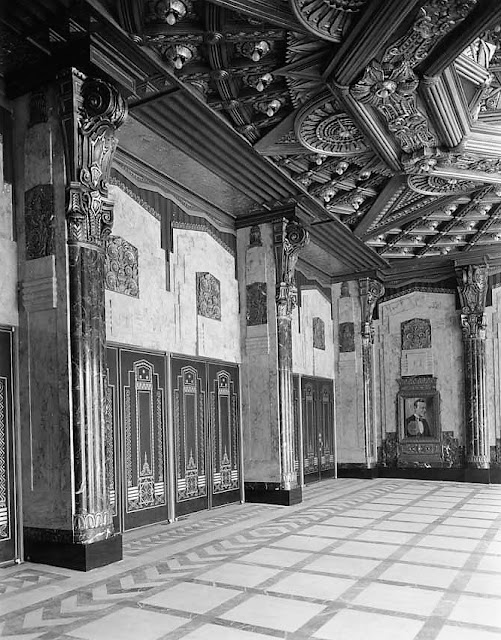 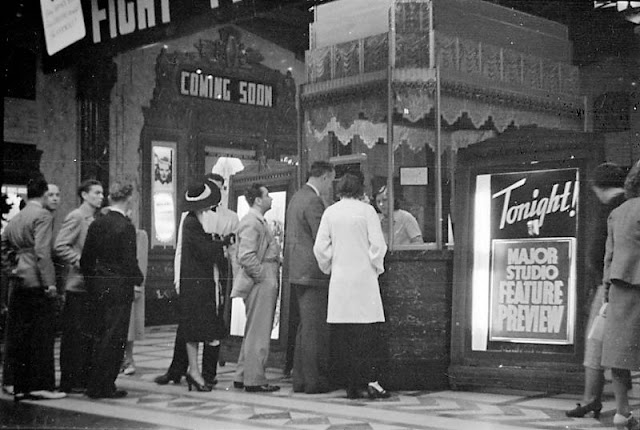 c.1937 - A look at the crowd taken by Herman Schultheis on a Studio Preview night. The photo is in the Los Angeles Public Library collection. 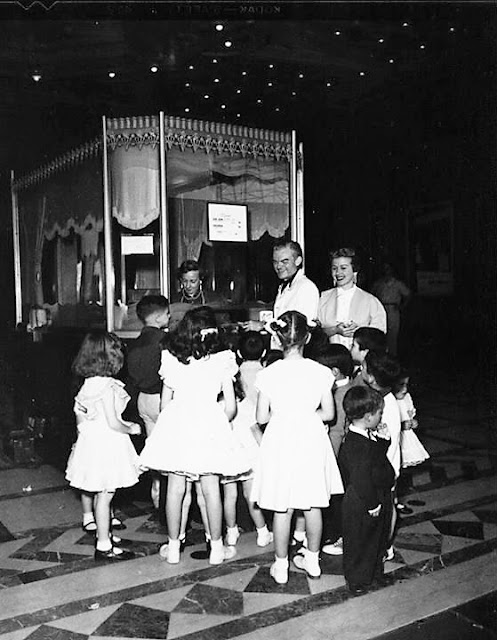 1954 - Spike Jones at the boxoffice for the opening of "Fireman, Save My Child" -- his film the bottom half of a double bill with "Playgirl" starring Shelley Winters. Ted Hering posted this shot on Vintage Los Angeles. Also see a street view with Spike lined up with (presumably) all his nieces and nephews. Thanks, Ted!

1959 - A dropped ceiling was installed covering the features of the marquee soffit and the ticket lobby ceiling. The walls were furred out and the 1930 vintage display cases concealed. 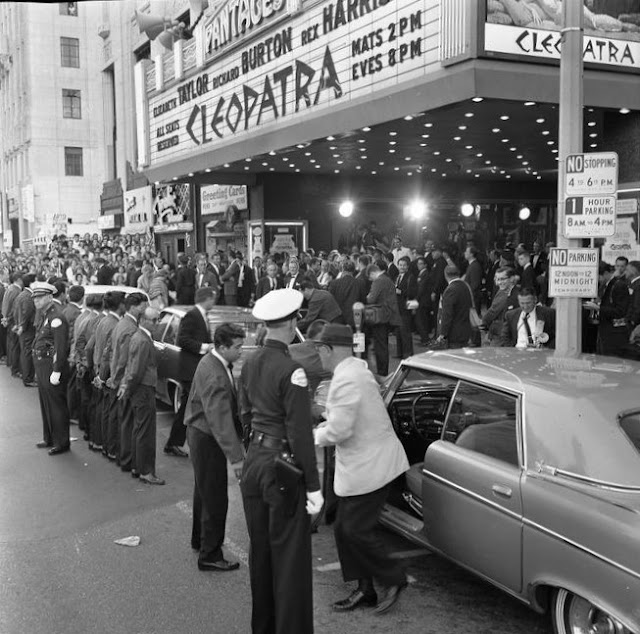 1963 - The "modern" ceiling treatment can be seen in this view of the opening of "Cleopatra." It's an L.A. Times photo in the UCLA L.A. Times Photographs Collection. 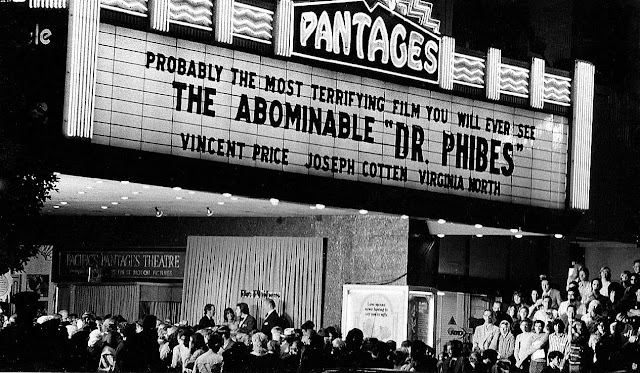 1971 - A look at the "Pacific's Pantages Theatre" signage above the boxoffice area. It's a John Ward photo of the premiere of "The Abominable Dr. Phibes." Vincent Price is being interviewed by the TV host of the event on the stage at the center of the image. Thanks to Damon J. Goldstein for sharing the photo on the Dr. Phibes Facebook page. Goldstein is the son of William I. Goldstein, co-screenwriter for the film. 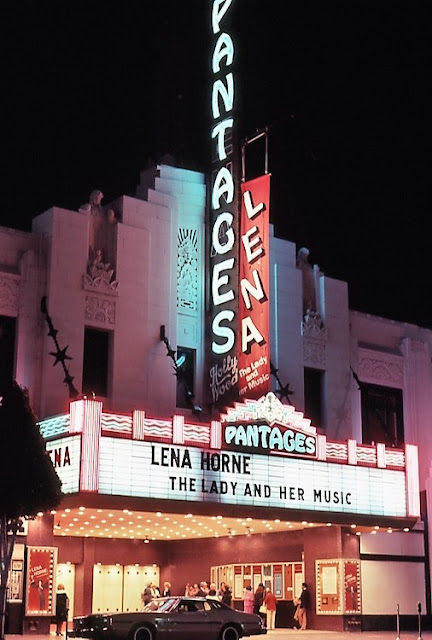 1983 - A view of the ticket lobby during the run of "Lena Horne - The Lady and Her Music."  It's a photo from the American Classic Images collection. 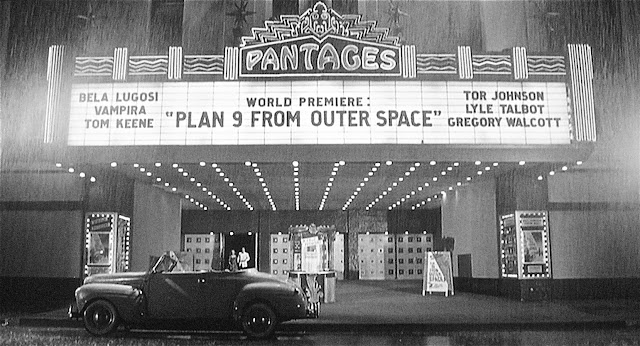 1994 - We get a fine vista of the ticket lobby in Tim Burton's "Ed Wood." That Skouras-style boxoffice was brought in for the film. Johnny Depp and Martin Landau are going to a premiere of "Plan 9 From Outer Space." See the Historic L.A. Theatres in Movies post for two more Pantages shots as well as views of the Orpheum, Warner Hollywood and the Stadium Theatre in Torrance. 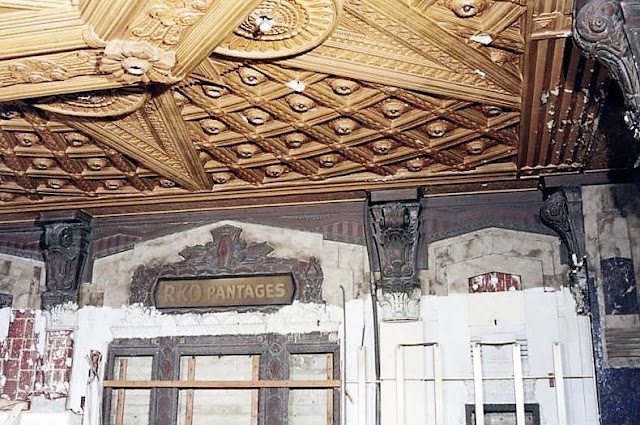 2000 - Restoration work underway. The ceiling had been dropped and display cases covered over in the 1959 "modernization." Thanks to Amy Higgins for the photo from her website AmyHiggins.com. Her terrific work on the Nederlander renovation of the theatre while working with Evergreene Architectural Arts included plaster restoration, decorative painting and gold leaf work. See her Pantages Hollywood page for more photos. 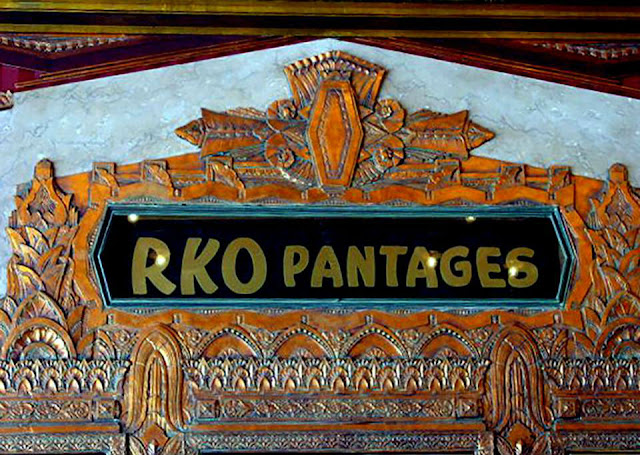 2002 - A detail of the RKO signage still in the display window above the cases.  Initially a Fox operation, the theatre was acquired by Howard Hughes for RKO in 1949. Thanks to Bob Davidson for his photo, originally a post on the Los Angeles Theatres Facebook page. Also see a ceiling dome view from Bob. 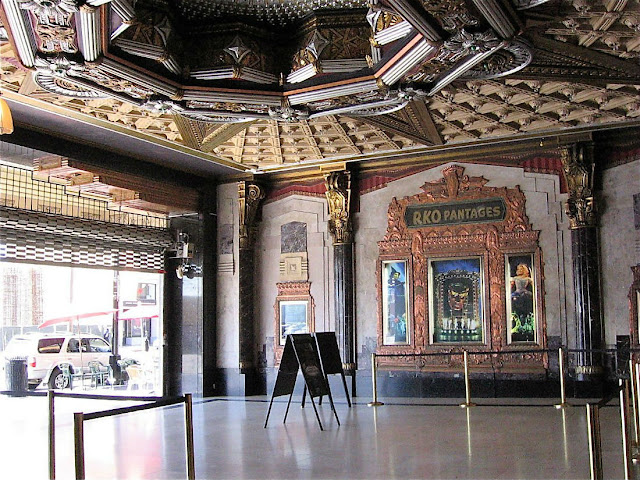 2007 - Looking out with a view of the west wall display cases. Photo: Bill Counter 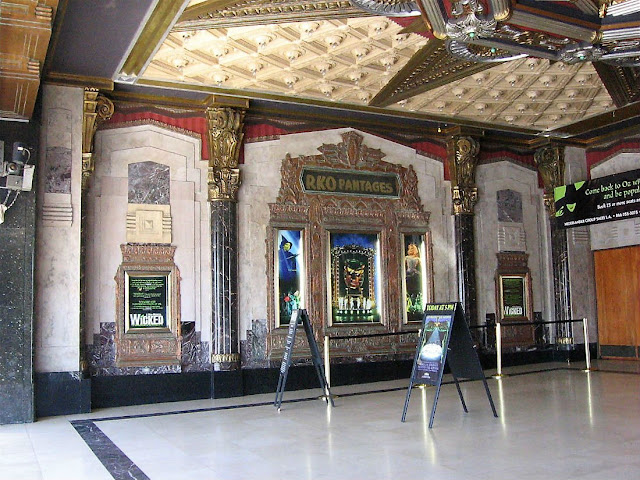 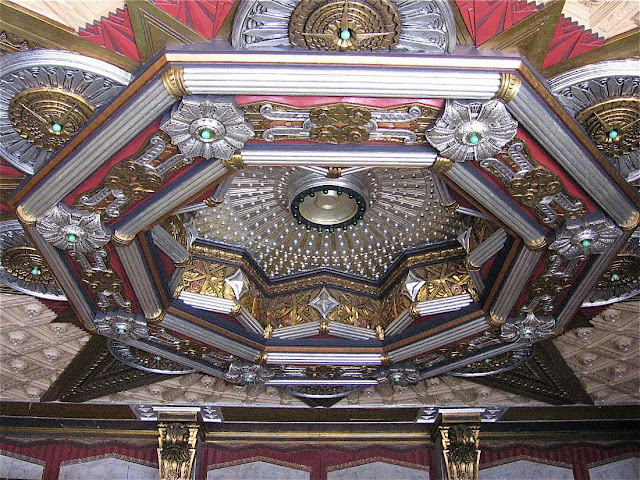 2007 - The ceiling dome of the ticket lobby. Photo: Bill Counter 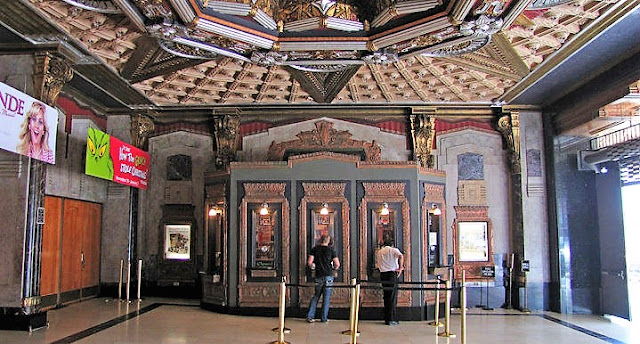 2010 - Thanks to Don Solosan of the Los Angeles Historic Theatre Foundation for this view toward the boxoffice windows on the east wall. Note that the boxoffice area is built out from the original wall. For the theatre's first few decades there was an island boxoffice. The photo originally appeared on the LAHTF Facebook page. 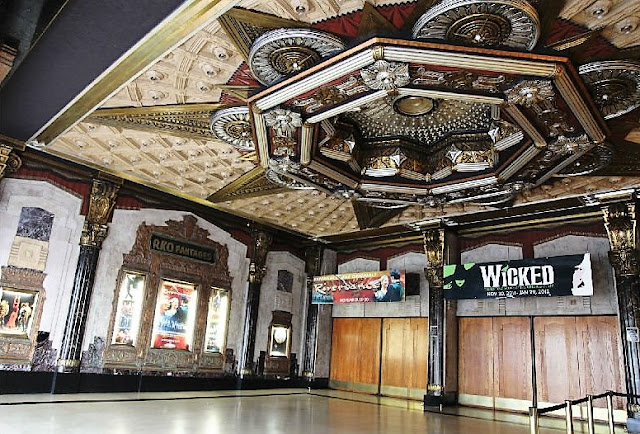 2011 - A look toward the west side of the ticket lobby by Lin Rhys. 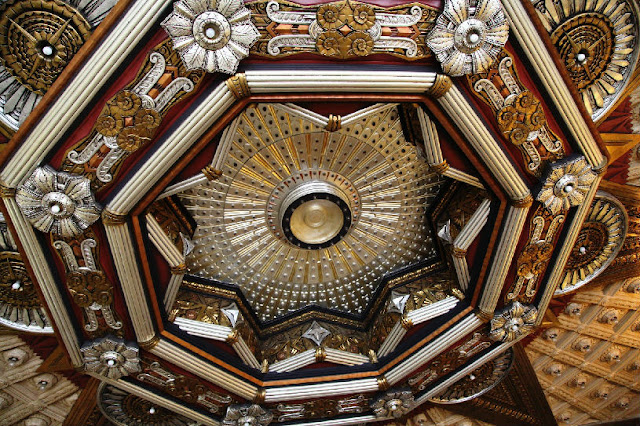 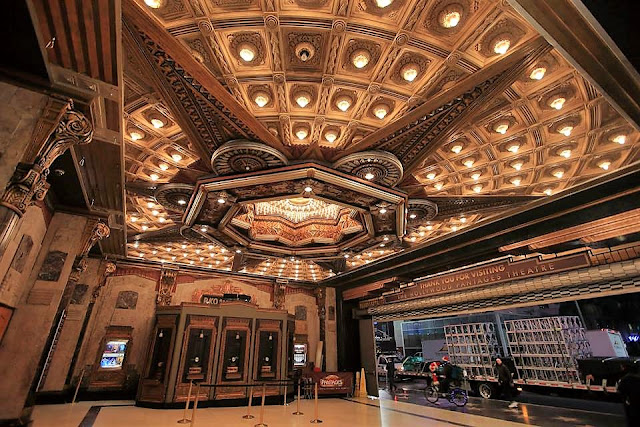 2016 - Thanks to Mike Hume for his wide angle view of the space. Don't miss the Pantages Theatre page on his website for more photos, drawings and technical specifications. 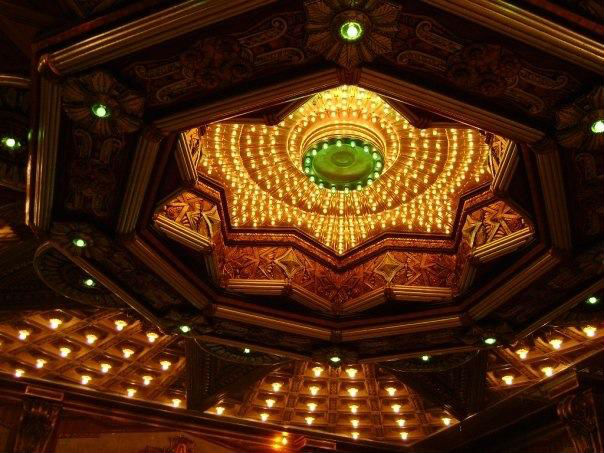 2018 - The green oculus in the ticket lobby ceiling during a return run of "Wicked." Thanks to Howard Nugent, former master electrician at the theatre, for sending along his photo.