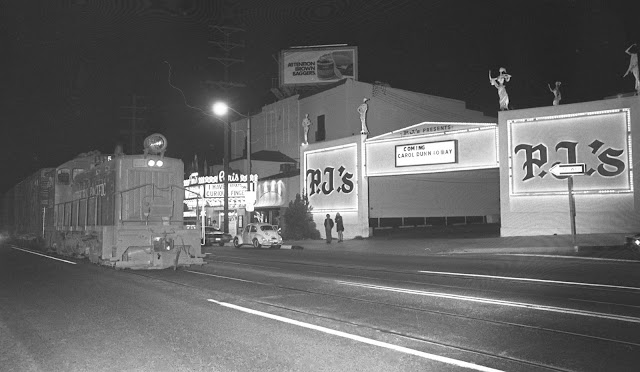 The Carmel, here in its Paris Theatre days, is behind the Southern Pacific freight as we look west on Santa Monica Blvd. The 1970 photo by Boris Yaro on Calisphere is from the UCLA L.A. Times Photographic Archive.

Status: The Paris ran until January 1976 when it was destroyed by fire. 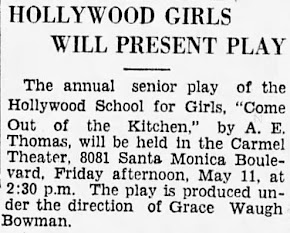 A Times mention of a 1928 event at the Carmel. Thanks to Ken McIntyre for finding the item. 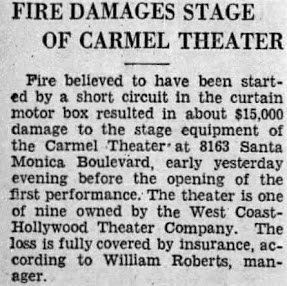 Trouble backstage in 1933. Thanks to Ken McIntyre for finding the Times article. 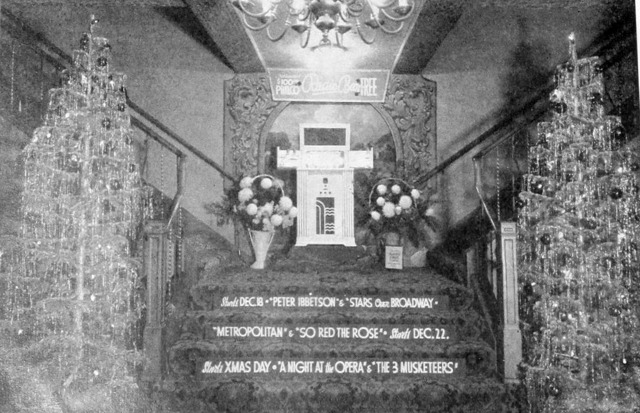 A 1935 lobby photo from contributor Dallas Movie Theaters on the Cinema Treasures page about the theatre. 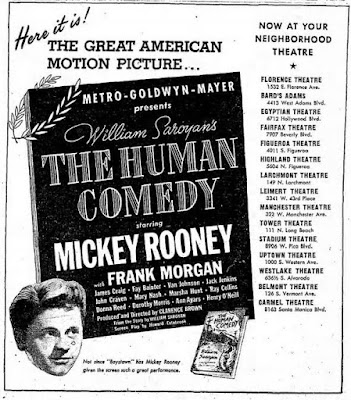 A June 20, 1943 ad listing the Carmel. Thanks to Scott Santoro for the research. 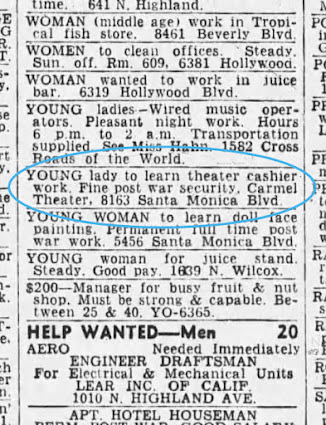 "Fine post war security." It was a June 1945 ad in the Los Angeles Citizen News. Thanks to Ken McIntyre for locating it.

Still alive in September 1952, the Carmel was running the Martin & Lewis film "Jumping Jacks." Thanks, Scott!

A surprised holdup man in 1953. This and other items about the theatre were featured by Ken McIntyre in a post on the Photos of Los Angeles Facebook page.

After it had been dropped by Fox West Coast, the Carmel as an independent tried a new policy as the Carmel Museum Theatre running one current film double billed with a classic. It was a project of Charles Tarbox of the Film Classic Exchange. 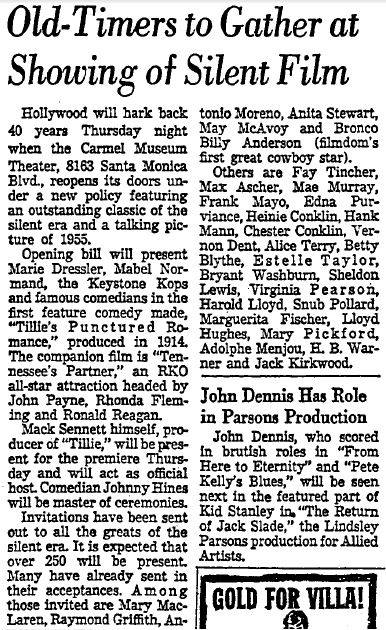 An article in the October 30, 1955 L.A. Times outlined the new policy. Thanks to Eitan Alexander for the research. The opening was November 3.

An ad for the opening bill of the Carmel Museum Theatre in 1955. Thanks to Ken McIntyre for locating this and the article below for a post on the Photos of Los Angeles Facebook page.

A November 1955 article about the grand opening festivities. Host Mack Sennett introduced three of his original Keystone Cops: Andy Clyde, Heinie Conklin and Al Thompson. The venue was listed as the Carmel Museum Theatre in the 1956 city directory. 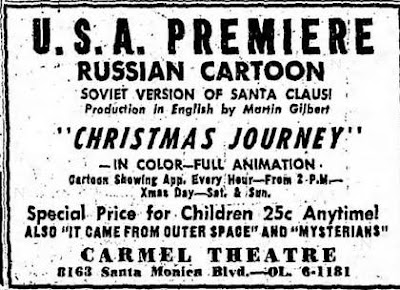 A c.1957 ad unearthed by Scott Santoro. He comments: "Thanks Mom and Dad! A Soviet Santa cartoon!! Neat-O! Well, maybe the 'Mysterians' won't be too bad..." 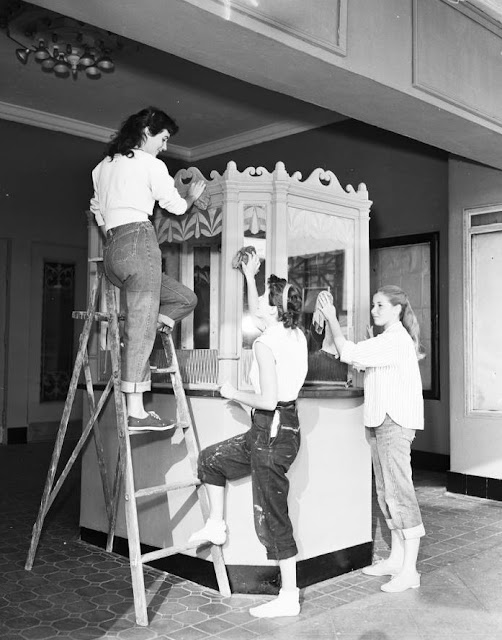 The Carmel then had a fling as a legit house in 1957 with Richard Gray's New Vic Theatre Company in residence.  Here several of the company members are working on the boxoffice. It's a Herald Examiner photo, one in a set of ten in the collection of the USC Digital Library. 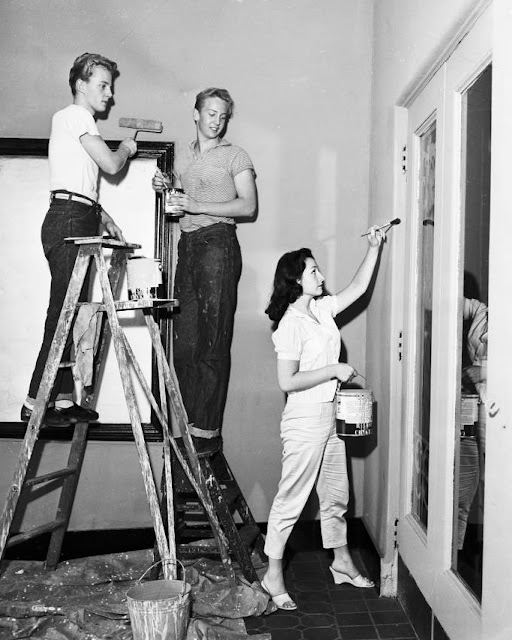 A 1957 view of the New Vic team working on the doors. It's part of the USC / Herald Examiner set. 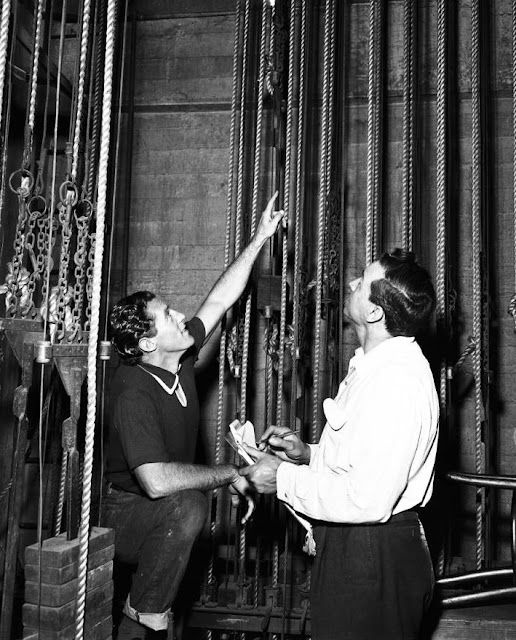 Checking out the Carmel's 1924 vintage rigging. 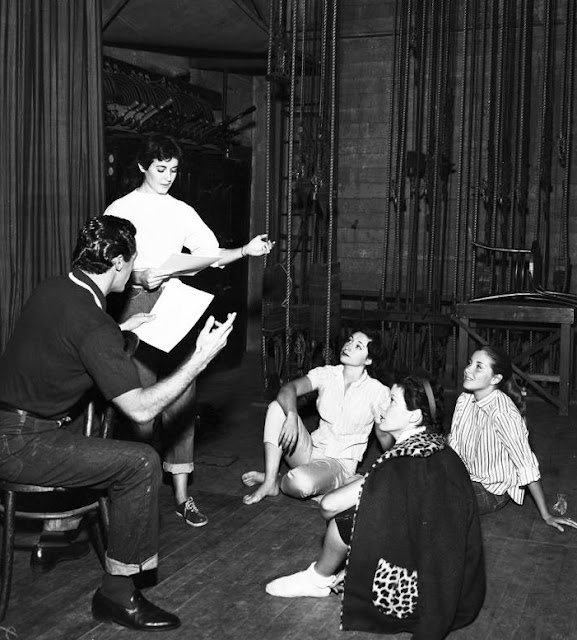 Another 1957 Herald Examiner backstage view giving us a look over toward the dimmer board. 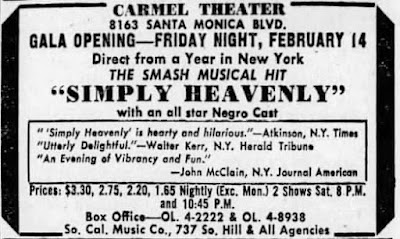 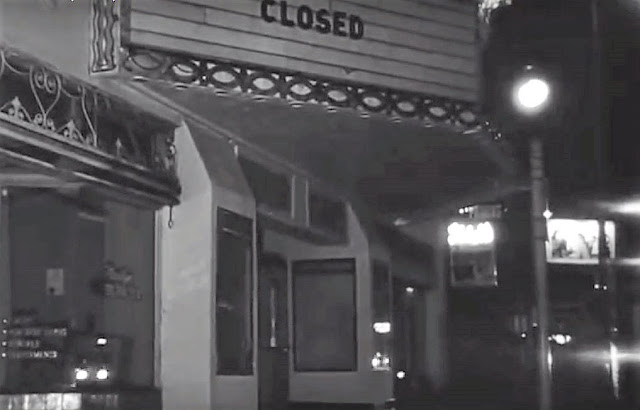 The Carmel in the Movies: We get a bit of time in the abandoned theatre in "High School Hellcats" (American International, 1958). The girls that belong to the "Hellcats" meet in the theatre, located "on the other side of town." 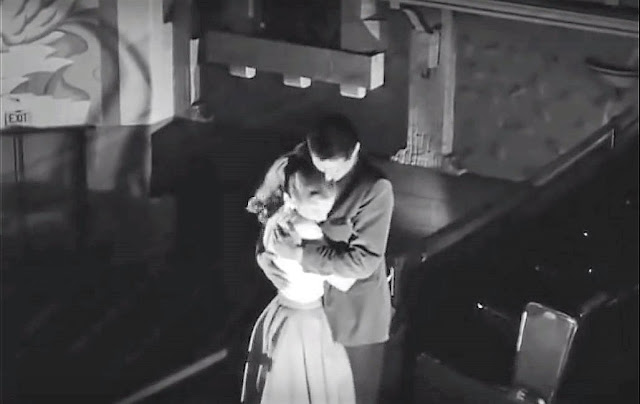 A happy reunion at the end of "High School Hellcats" with our good girl Joyce and her boyfriend Mike after a bit of a fight in the balcony -- and bad girl Dolly falling over the edge. See the Historic L.A. Theatres in Movies post for several more shots from the film. Thanks to Eitan Alexander for spotting this one.

A 1961 ad for "Immoral Mr. Teas" at the Paris. Thanks to Ken McIntyre for finding it for a post on the Photos of Los Angeles Facebook page. 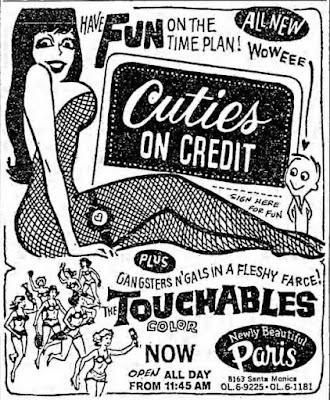 A February 28, 1964 ad for the Paris. Thanks to Scott Santoro for finding it in the L.A.Times. 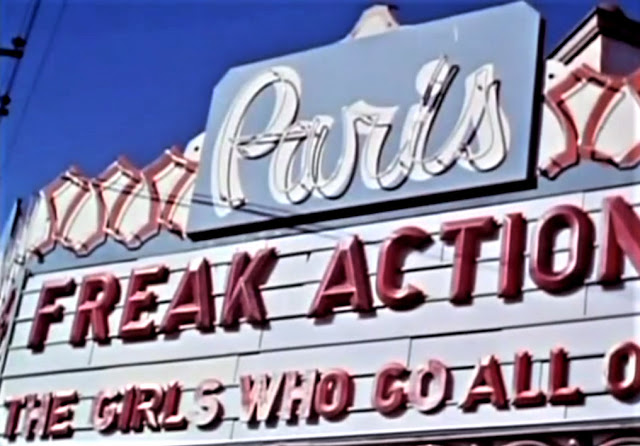 The Paris Theatre in the Movies: We get a look at the Paris as part of a montage displaying many of L.A.'s high culture sites near the opening of "The Swinger" (Paramount, 1966). The film stars Ann-Margret and Tony Franciosa. See the Historic L.A. Theatres in Movies post for shots of five other theatres seen in the little travelogue. 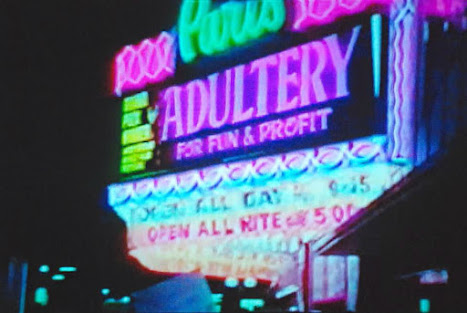 An impressionistic image of the neon at the Paris. It was a post on the Facebook page Photos of Los Angeles by Ken McIntyre. 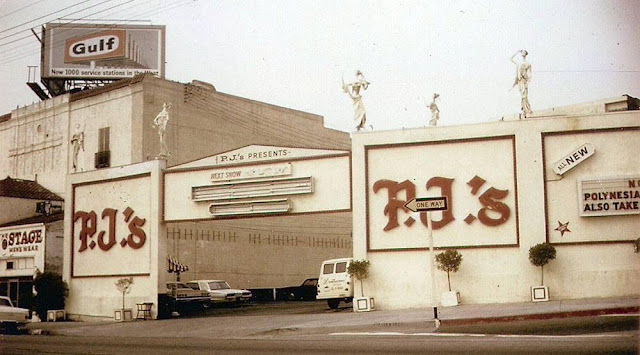 We get a bit of the theatre in this shot of the club next door. Thanks to Alison Martino for the photo. It appears with her Martino's Time Machine post "P.J.'s Nightclub." P.J.'s later became Starwood.

P.J.'s next to the Paris was more of a club than a theatre. But here, as we see in a 1964 ad that Scott Santoro found, they're almost going legit -- and actually calling themselves a theatre. Scott comments: "Next door, at PJ's, the World's Fair sensation, Sid and Marty Kroftt's 'Les Poupees des Paris.' It played at both the Seattle and New York World's Fairs."

A June 1968 Times ad for the Paris and the Paris Penthouse. Thanks to Ken McIntyre for locating it. 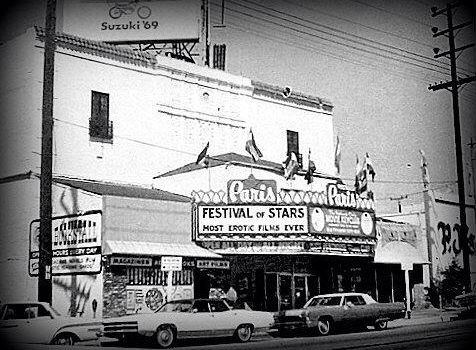 The Paris in 1969. Thanks to Ken McIntyre for the photo, a post on Photos of Los Angeles. 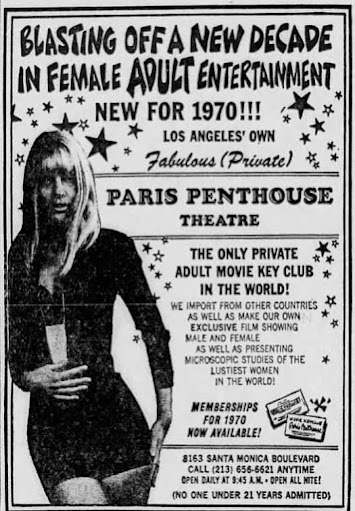 A Times ad in 1969 advertising a second screen added as a private VIP space. Thanks to Ken McIntytre for locating the ad. 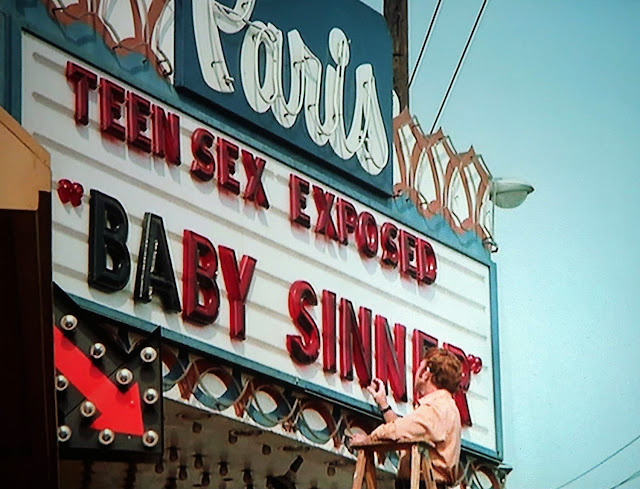 The Paris in the Movies: We get some fine marquee shots when Vince Edwards stops by to hassle the manager in "The Police Connection," a film directed by Bert I. Gordon also known as "The Mad Bomber" (Cinemation Industries, 1973). See the Historic L.A. Theatres in Movies post for three more shots of the scene at the Paris plus a view of Chuck Connors as the bomber driving by the Warner / Warrens Theatre downtown in a van filled with dynamite. 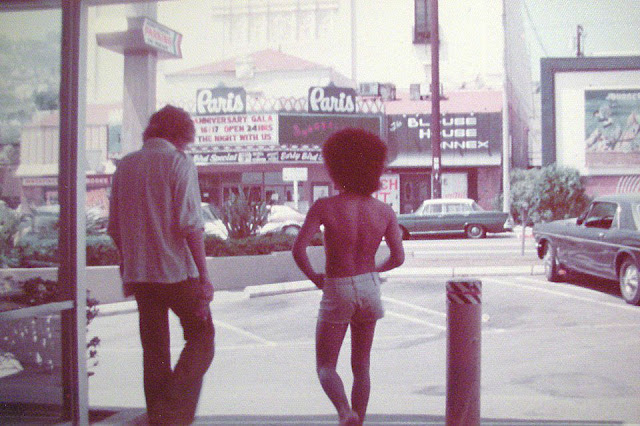 A 1975 view of the Paris from across the street. It was a post on the Facebook page Vintage Los Angeles by Richard J. Frost. 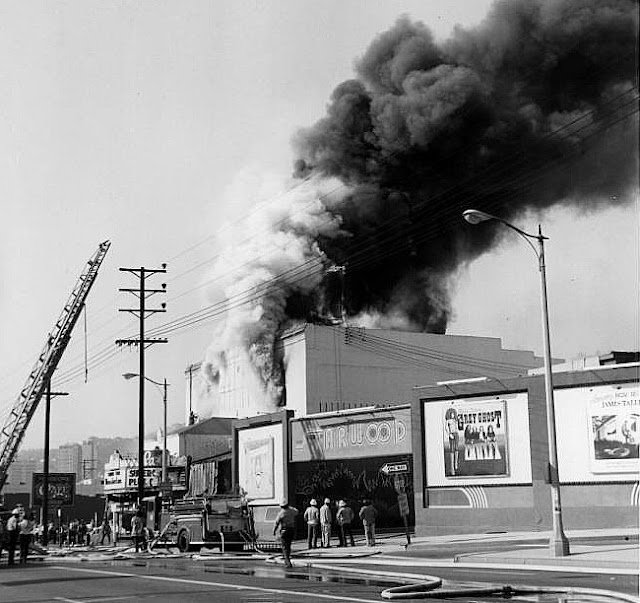 A January 1976 fire photo taken by Pat Rocco. It's in the ONE National Gay and Lesbian Archives and appears on the USC Digital Library website. 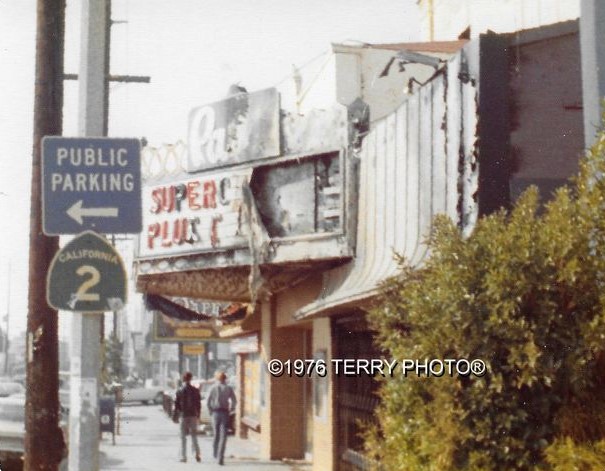 Looking west on Santa Monica Blvd. after the fire in January 1976. Thanks to Terry Wade for the photo. It's one of a set of six that he took a few days after the fire for his friend Shane Sayles, the owner of the business, who was up in San Francisco at the time. Terry comments that the L.A.Times published a marquee photo after the fire with the headline "Is Paris Burning?" 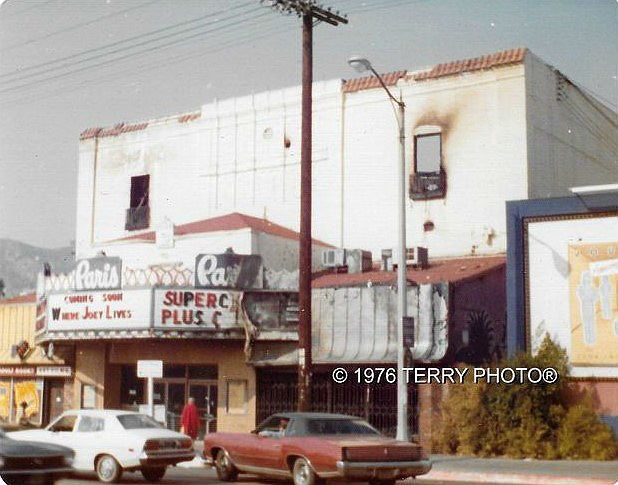 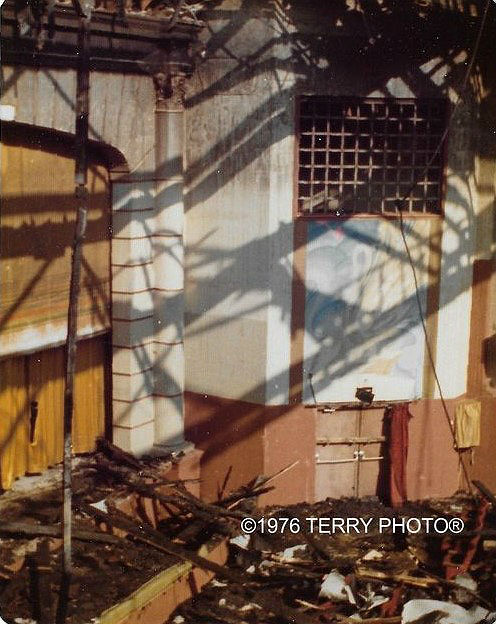 The right side of the proscenium. It appears that the asbestos came part way down during the fire. Photo: Terry Wade - 1976 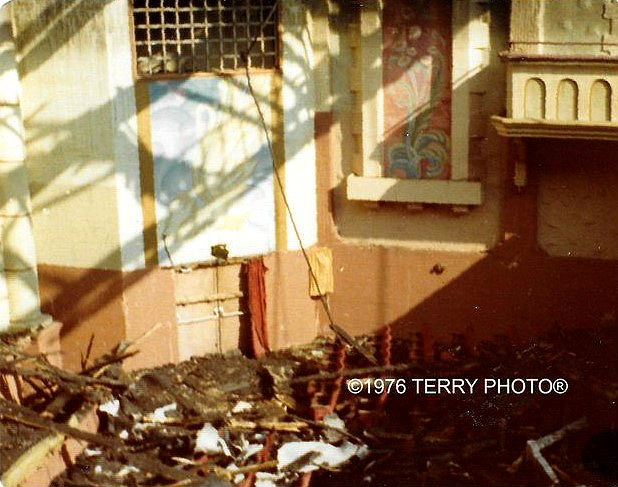 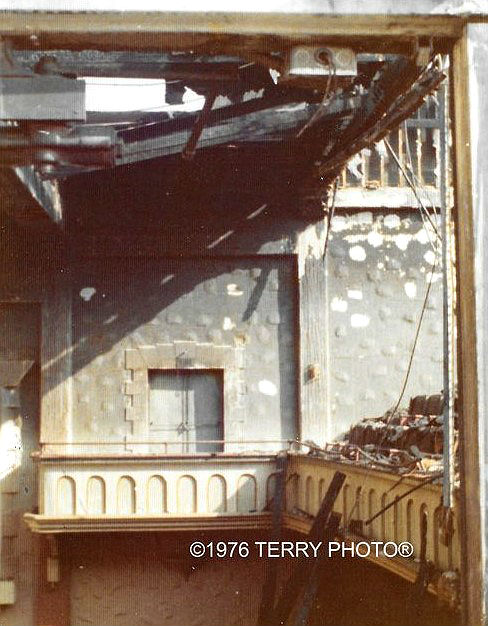 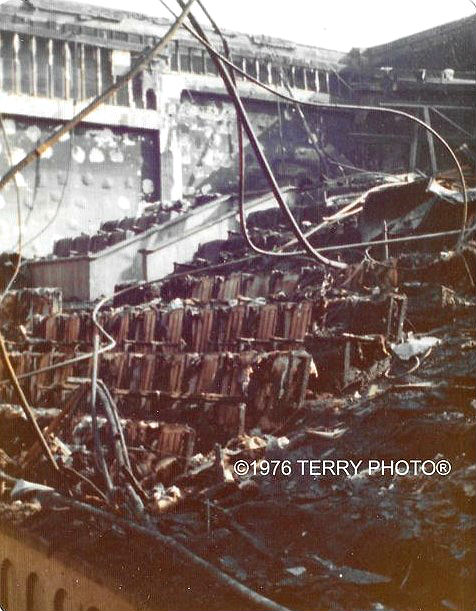 A look toward the rear of the balcony. The building was later demolished. Photo: Terry Wade - 1976


More information: See the Cinema Treasures page on the Carmel.