Opened: September 18, 1937 with Spencer Tracy in "Captains Courageous" along with John "Dusty" King in "The Road Back." Thanks to Bill Gabel for the research. The location was on the north side of the street just west of La Cienega Blvd.

The painting of the Lido's facade is from the collection of Bruce Kimmel. He comments: "This painting adorns the cover of my first novel, 'Benjamin Kritzer.' It was done by Harvey Schmidt (composer of 'The Fantasticks'). I sent him a photo of the Lido from 1956 and told him what to put on the marquee (a double bill I saw there). He did a magnificent job." Thanks, Bruce!

The project was announced in the August 28, 1936 issue of Southwest Builder and Contractor, according to research by Joe Vogel. Thanks to Jeff Bridges for locating this item in the March 21, 1937 issue of the L.A. Times:

"COMBINED STORE, BANK, THEATER BUILDING RISING - Construction is under way on a theater, store and bank building at the northwest corner of Pico and La Cienga Boulevards for Pacific States Theaters, Inc. Contract was awarded to the Wesco Construction Company at $52,000. Architect C.A. Balch designed the structure. The building will contain a theater auditorium with seating capacity of 900, three storerooms and branch banking quarters for the Bank of America National Trust and Savings Association."

For years it was operated by National General and, later, Mann Theatres. It had a good run as an art venue, a revival house and, at the end, was a bargain theatre.

Status: Demolished in 1979. It's now a parking lot for the Bank of America branch on the northwest corner of Pico and La Cienega.

The Lido on TV: 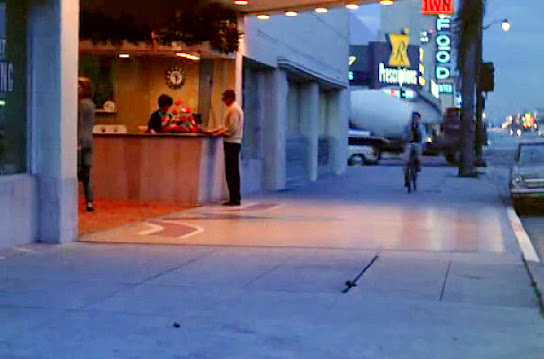 This view is seen in "Fire Show," episode 19 of season 4 of "Laverne and Shirley." It aired February 20, 1979. Thanks to Eitan Alexander for spotting the theatre and getting the screenshot.  Bruce Kimmel comments:
"Oh, how I miss the Lido, not to mention Big Town Market and the drug store next to it and Ralph's five and dime to the east of Big Town. Right across the street from Big Town was one of two amazing Chinese restaurants of the neighborhood - Kowloon. Then about eight blocks west of the Lido was Wan-Q. Four blocks west of the Lido was Sherbourne Drive, the street I grew up on." 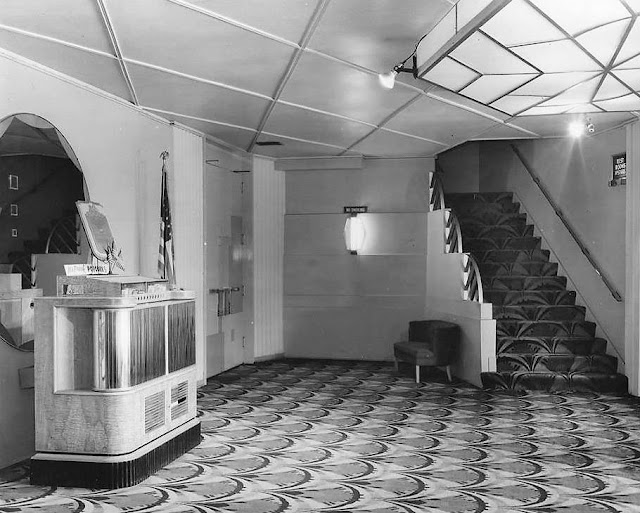 A c.1943 lobby photo by Nate Singer from the collection of Bruce Kimmel. 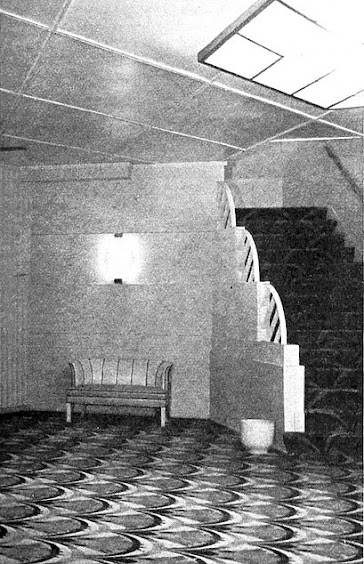 A closer look at the stairs. Thanks to Dallas Movie Theaters for locating this 1938 trade magazine photo for a post on Cinema Treasures. 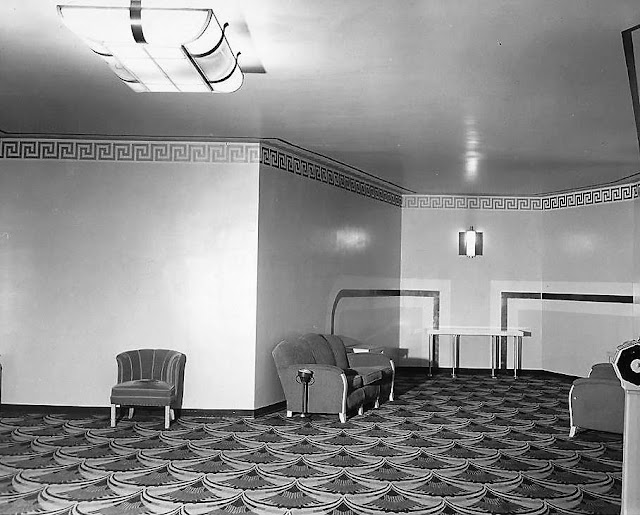 A c.1943 photo of the upstairs lounge area. It's a Nate Singer photo from the collection of Bruce Kimmel. 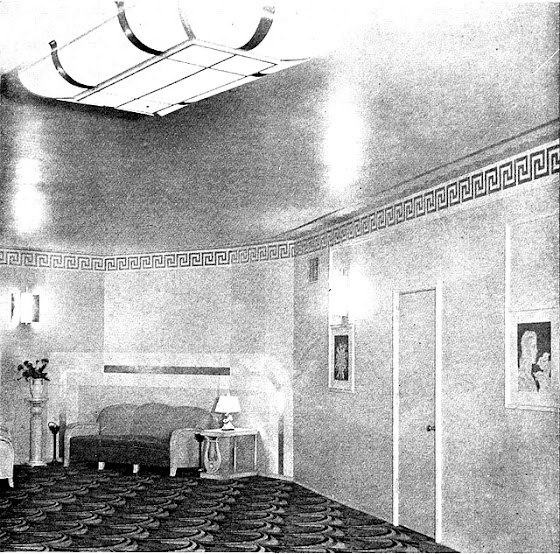 Another lounge view. It's a 1938 trade magazine photo located by Dallas Movie Theaters for a post on Cinema Treasures. 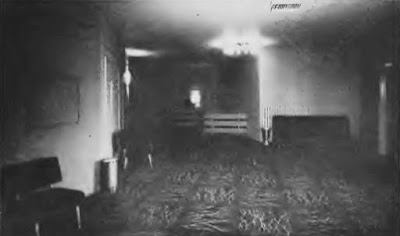 A murky view of the refurbished upstairs lounge from the October 22, 1962 Boxoffice story about the renovations at the theatre. 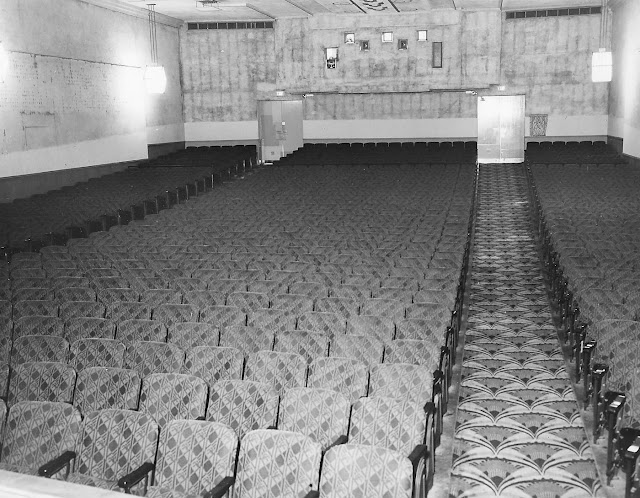 The rear of the auditorium c.1943. It's a photo by Nate Singer. Many thanks to Bruce Kimmel for sharing these photos from his collection. 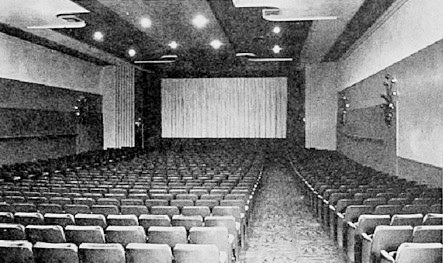 A look toward the screen and the new lowered ceiling after the 1962 renovations. It's an image from the October 22, 1962 issue of Boxoffice. Their caption:

"All new seating, on widely spaced centers, was installed in the Lido auditorium, new carpet was laid in the aisles, a new screen and stage draperies were hung, and new light fixtures were installed on the re-decorated walls. The projection booth was also updated and re-equipped." 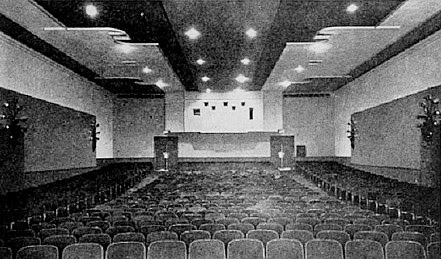 The rear of the house as seen in the 1962 Boxoffice article. 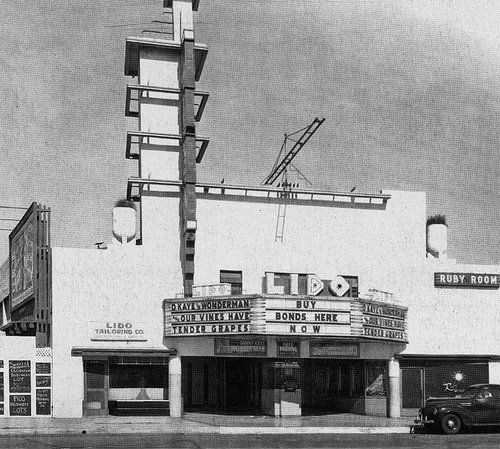 A 1945 view of the Lido with "Our Vines Have Tender Grapes" as the attraction. The photo appears in the Arcadia Publishing book "Theatres in Los Angeles" by Suzanne Tarbell Cooper, Amy Ronnebeck Hall and Marc Wanamaker. The photos in the book are from Mr. Wanamaker's Bison Archives.

Thanks to Ken McIntyre for posting it on the Facebook page Photos of Los Angeles. It also appears on the page Vintage Los Angeles and in an album of Jeff Bridges on Flickr. 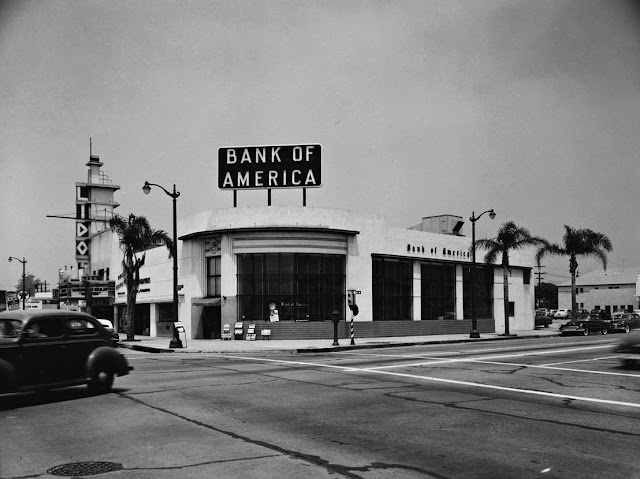 A 1951 look west on Pico across La Cienega toward the Lido. It's a Julius Shulman photo in the collection of the Getty Research Institute. He was out photographing various branch offices for Bank of America. The Getty indexes this one as Shulman job #967: Raymond Shaw / Bank of America. Shaw was the architect of the bank building, still there but with an ugly re-do.

The set of 3 photos also includes a shot looking north on La Cienega toward the intersection of Pico. Also see more Shulman photos on the Getty site. 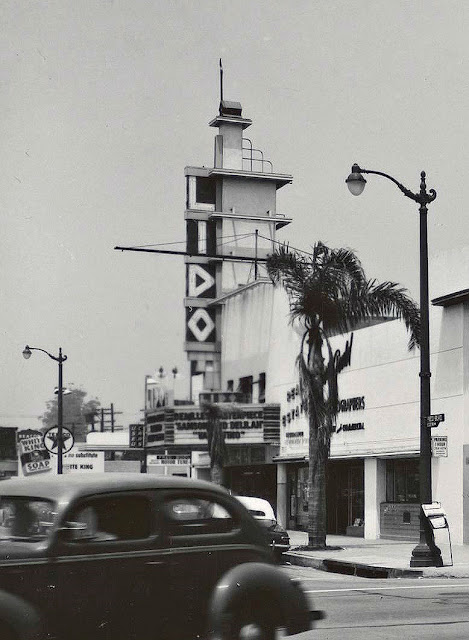 A closer look from the photo above. Bruce Kimmel notes that this double bill of "Samson and Delilah" and "Valentino" played the week of May 30, 1951. 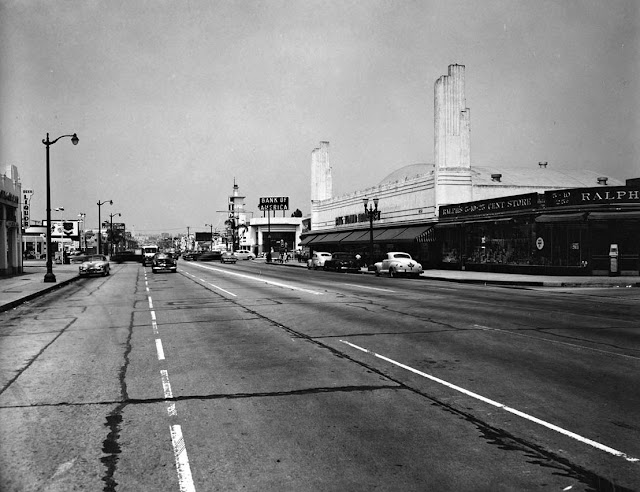 Julius Shulman's photo of the vista from a bit farther east on Pico. Thanks to Noirish Los Angeles contributor Hoss C for finding the Shulman set in the Getty collection. They're part of his Noirish post #31124 that also includes some recent views of the intersection. 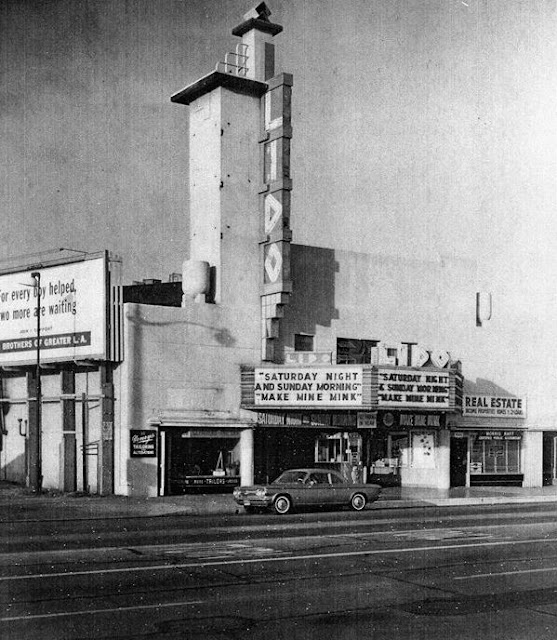 A c.1961 view posted on the Mid Century Modern Los Angeles Facebook page by Michael Snider. The Lido was running "Saturday Night and Sunday Morning" and "Make Mine Mink." Bruce Kimmel also added this one to the Los Angeles Theatres Facebook page. The photo also appears in the Photobucket album of White Sheik. 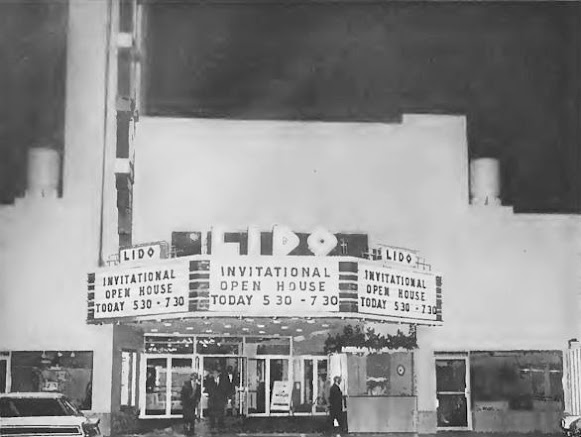 The Boxoffice magazine issue for October 22, 1962 had a story about the renovations at the theatre that included this photo. Fox West Coast had spent $100,000 for work including a new marquee and boxoffice off to the side. The caption:

"A gleaming, white concrete front, plus a new marquee and vertical sign, make the Lido Theatre a standout on its block in Los Angeles. A light-studded soffit, glass and aluminum doors, and carpet extending to the sidewalk are other features of the remodeled Fox West Coast house." 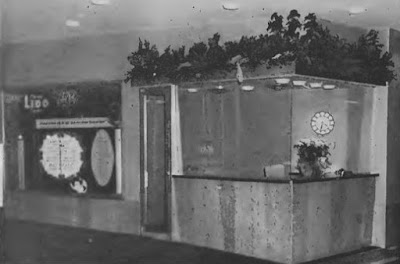 A closer look at the new boxoffice from the October 22, 1962 Boxoffice magazine story. 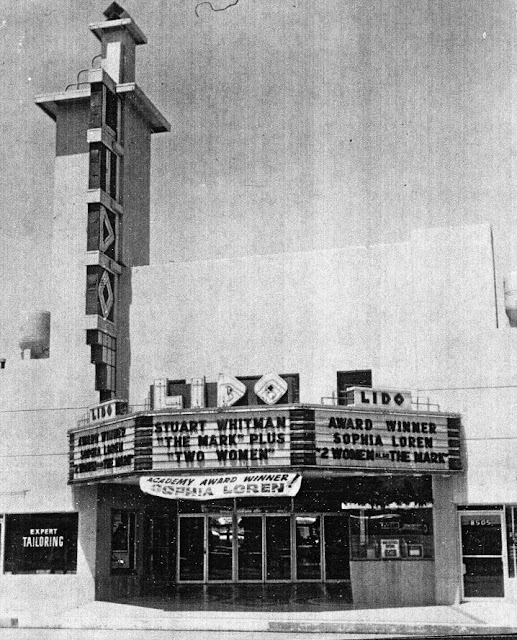 The Lido in 1962 running "The Mark" along with "Two Women" starring Sophia Loren. Thanks to Bruce Kimmel for the photo from his collection. 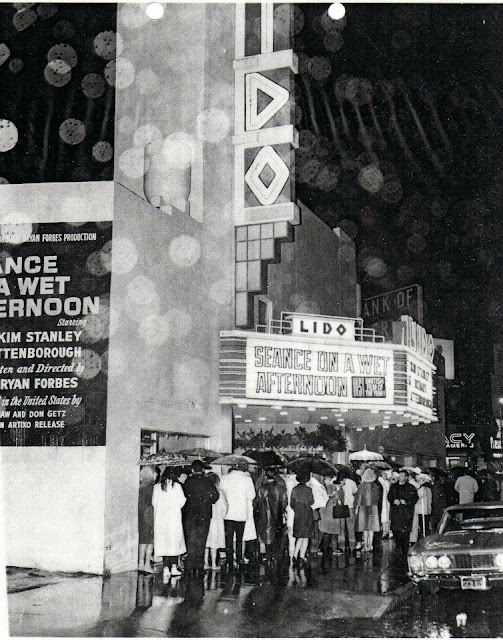 The Lido running "Seance on a Wet Afternoon," a 1964 release. It was a post on the Vintage Los Angeles Facebook page by Bruce Kimmel. 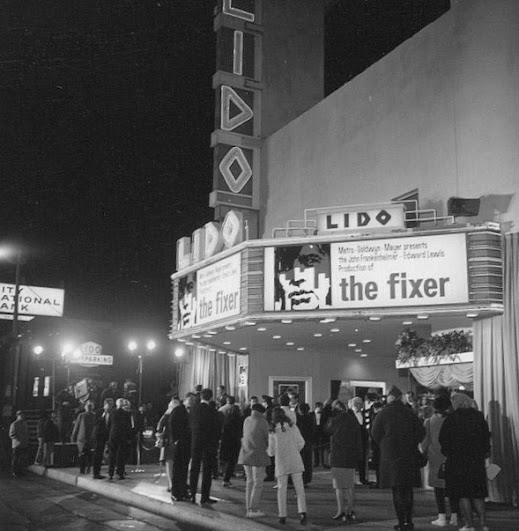 The opening of "The Fixer" at the Lido on December 11, 1968. Thanks to Bruce Kimmel for researching the date. Moviejs1944 located the photo for a post on Cinema Treasures. 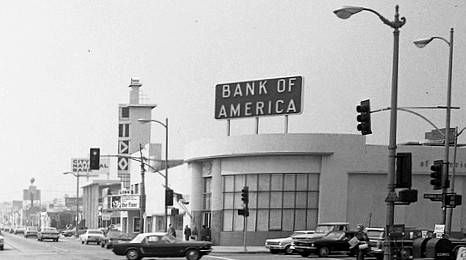 A late 1968 or early 1969 view west. Thanks to Sean Ault for spotting this when it was for sale online. Steven Cohan spotted "The Fixer" on the marquee and notes that he saw it there.

More information: See the Cinema Treasures page on the Lido for lots of history and comments.