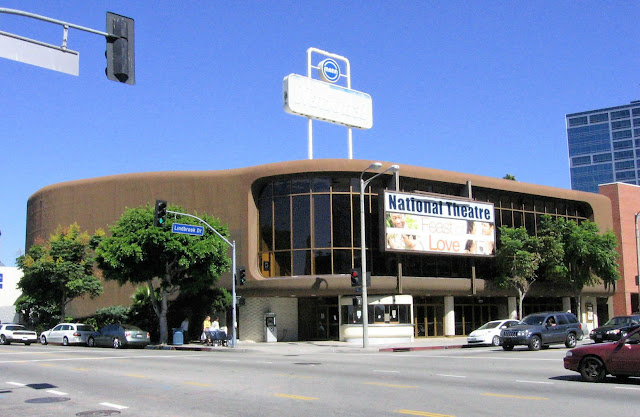 Opened: The debut of the National Theatre was March 26, 1970 with "The Boys in the Band." It was a project of National General Corporation, then the operator of the remnants of the Fox West Coast chain. The location was the northeast corner of Lindbrook and Gayley Ave. Photo: Bill Counter - 2007 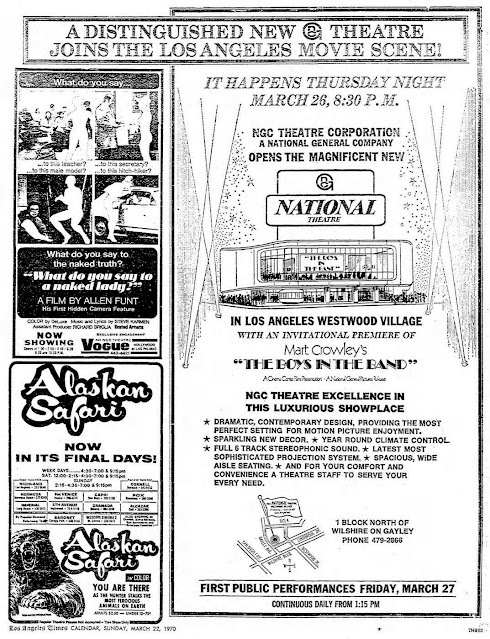 The opening day ad in the L.A. Times. Thanks to Michael Coate for sharing it from his collection. He included it in a post on the Cinema Tour Facebook page. It also makes an appearance with his post on the non-public Facebook group Friends of 70mm.

The new theatre was featured in a three page article in Boxoffice. Thanks to TJ Edwards for including it on the Cinema Sightlines page about the theatre. 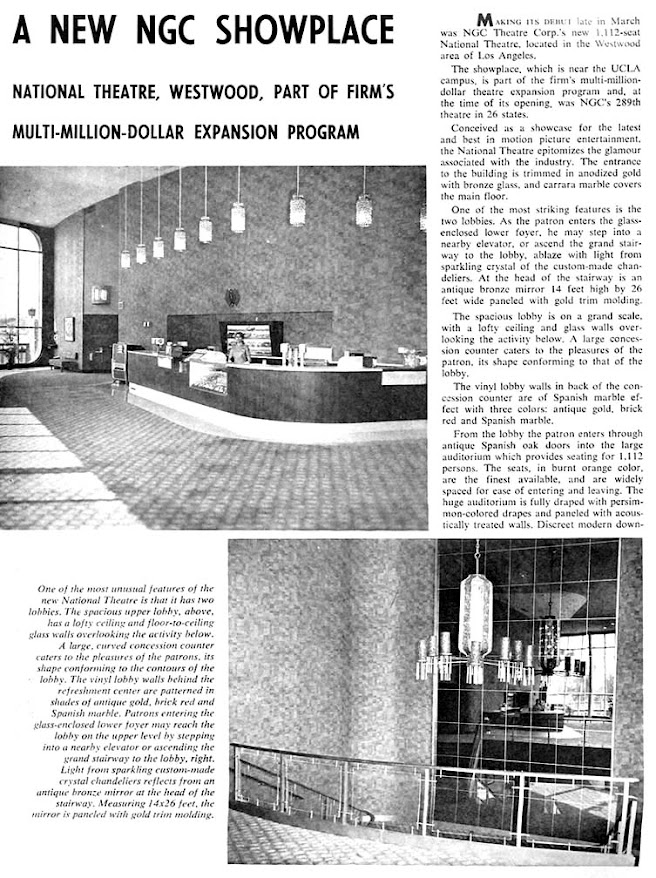 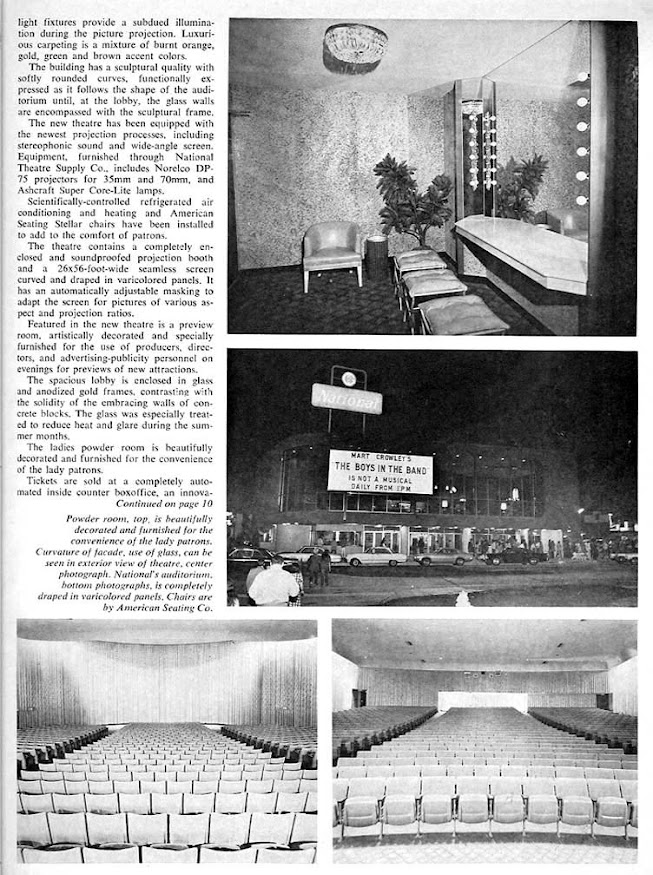 See the Cinema Sightlines page for TJ's discussion about the theatre. Thanks!

The National was acquired by Mann Theatres when they bought the chain and operated by them until 2007. The Mann Westwood 4 was just up Gayley from the National. The National hosted many record breaking exclusive runs over the years and was known for its giant screen and terrific 70mm presentations.

Projectors: Norelco AAII with, originally, Ashcraft Super Core-lite lamps. The boxoffice article refers to the machines as DP75s. But it was just the lamphouse bracket, as seen in the booth photo, that was from a DP75.

Michael Coate notes that the theatre's longest run was the 26 week engagement of "The Exorcist" in 1974.

Closing: After Mann closed the theatre April 19, 2007 it reopened and ran as an independent but closed again on October 7, 2007. Michael Coate notes that "Feast of Love" was the last film to play the theatre.

The National in the Movies:

We get a shot of Mark Ruffalo coming out of the auditorium after a police briefing in David Fincher's "Zodiac" (Paramount, 2007). The theatre is a stand-in for the Northpoint Theatre in San Francisco, where the film is set.

Jake Gyllenhaal, playing the Chronicle cartoonist who wrote the book the film is based on, accosts Mark Ruffalo on the lobby's lower level. Thanks to Jonathan Raines for spotting the theatre in the film.

An auditorium view from "Zodiac." The film also stars Chloë Sevigny, Robert Downey Jr., Brian Cox, John Carroll Lynch, Elias Koteas and many more. See the Historic L.A. Theatres in Movies post for more shots of the National, one of the Warner Grand in San Pedro (standing in for SF's Avenue Theatre), and a shot done on Broadway where the Castro Theatre has magically appeared. 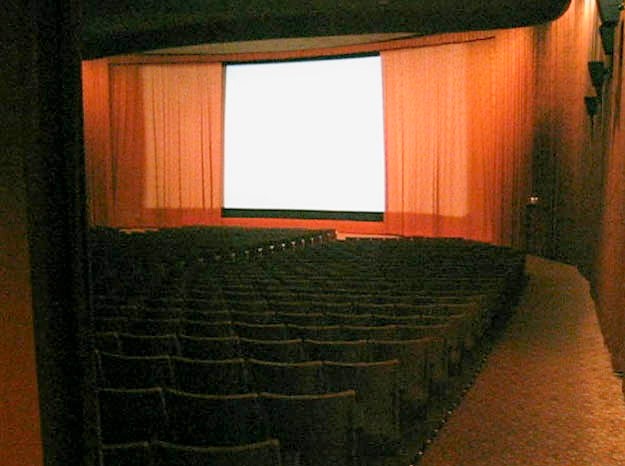 Not a lot to see inside -- the auditorium was the fully draped 70's look as you can see in this Mark Campbell photo. It's on the page about the National on Cinema Tour website where you'll find many more photos by Mr. Campbell along with others by by Adam Martin and Scott Neff. 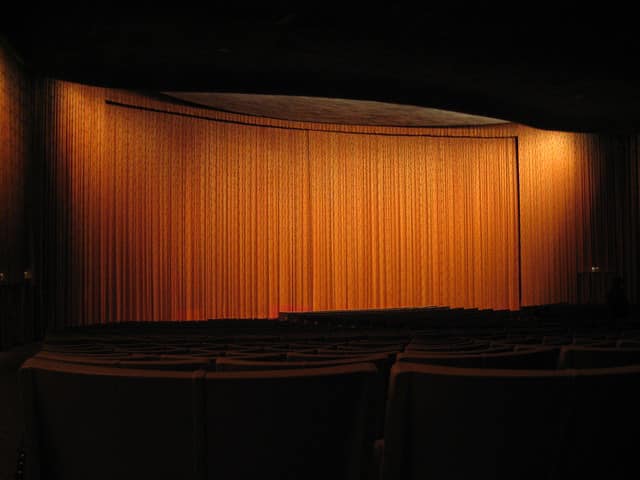 Another photo by Mark Campbell. Thanks to Michael Coate for posting it on the Cinema Tour Facebook page. 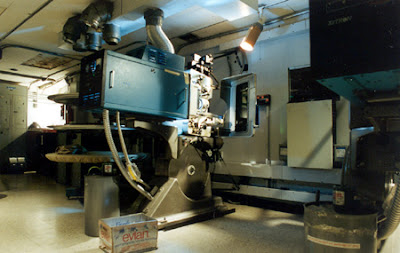 A 1994 booth view from Thomas Hauerslev appearing with "Construction of the Phillips 'All Purpose' projector DP70," an article on his terrific site In70mm.com.

1973 - The National on March 6 for the world premiere engagement of "Lost Horizon." Thanks to Cliff Scott Carson for the photo.

1973 - In the lower left the National is running "The Last of Sheila," a June release with Dyan Cannon, Richard Benjamin, James Mason and James Coburn. The UA Westwood, later know as the Mann Festival, is over on the right. Thanks to Sean Ault for spotting the image when it was for sale online. 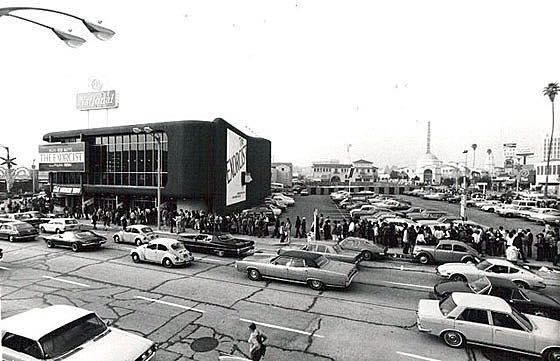 1973 - The crowd for "The Exorcist," a December 26 opening. Thanks to Stephen Russo for the post on the Facebook page for the non-public group Mid Century Modern Los Angeles. Provenance of the photo is unknown. 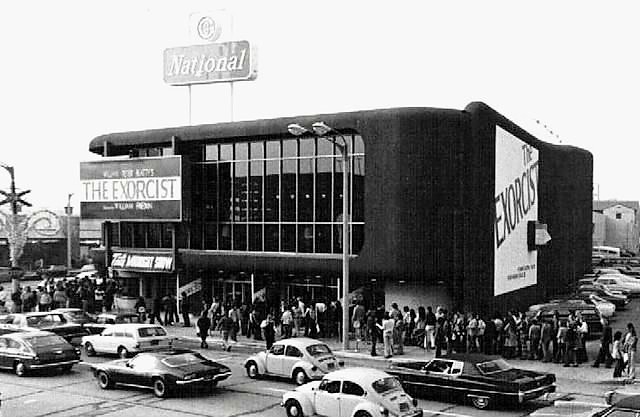 1973 - A detail from the photo above of the line for "The Exorcist." This version was a post from Alison Martino on her Facebook page Vintage Los Angeles. Gregg Sultan did a repost on VLA with a curious version of the history of Westwood's decline as his caption. 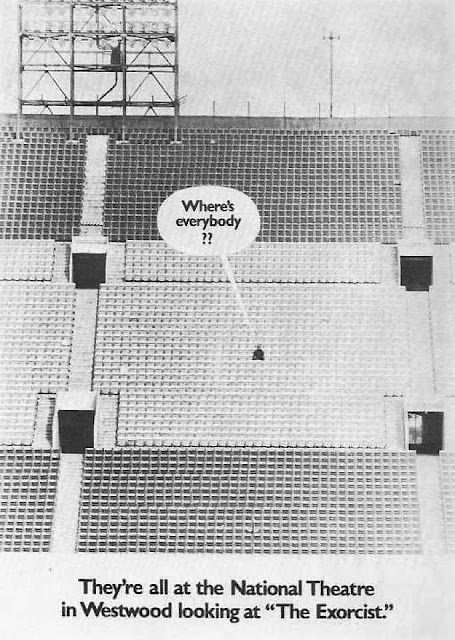 1974 - We don't get very many cartoons about movie theatres. One that comes to mind is the New Yorker cartoon with the little girl in the rotunda of the Roxy saying "Mommy, does God live here?"

Thanks to Ken McIntyre for posting this one about the National's run of "The Exorcist" on the Facebook page Photos of Los Angeles. Robert Valding notes that this was an ad that the National ran in the L.A. Times. 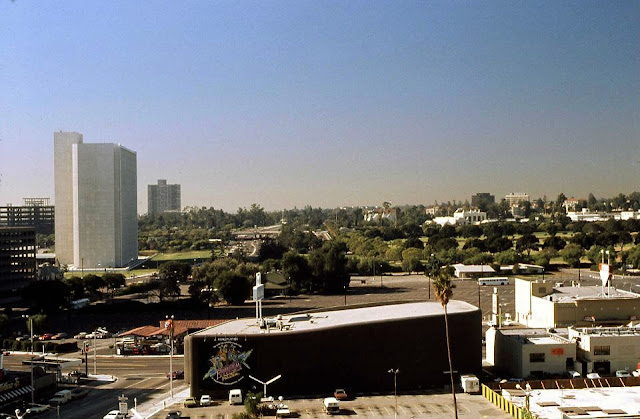 1974 - A look at the National from Richard Wojcik's collection appearing as a post on the Facebook page Vintage Los Angeles. Note the art for "Phantom of the Paradise" on the sidewall. 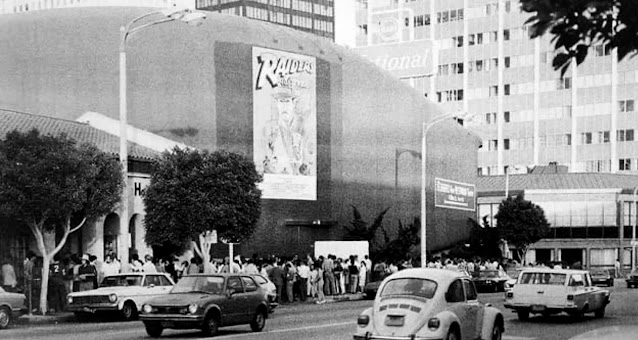 1981 - The line for "Raiders of the Lost Arc" in June. Thanks to Michael Coate for sharing the photo on Facebook. 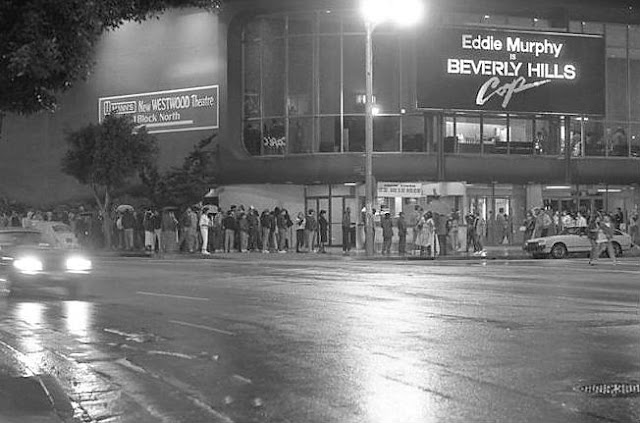 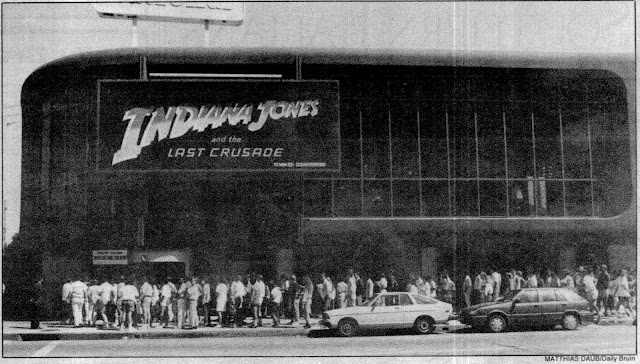 1989 - "Indiana Jones and the Last Crusade" in May. Thanks to Michael Coate for sharing this from his collection. He included it with posts on the Cinema Tour Facebook page and on the page for the non-public Facebook group Friends of 70mm. It's a photo by Matthias Daub that appeared in the Daily Bruin. 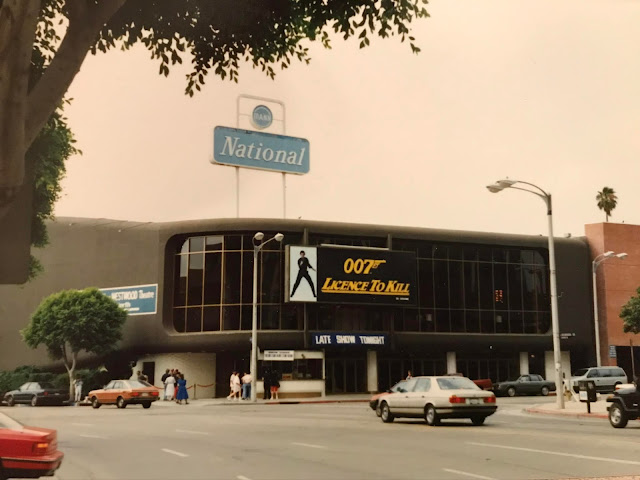 1989 - Thanks to Richard DuVal for sharing his "Licence To Kill" photo on the Westwood in the 70s and 80s Facebook page. The post also included shots of posters in Hollywood advertising the film. 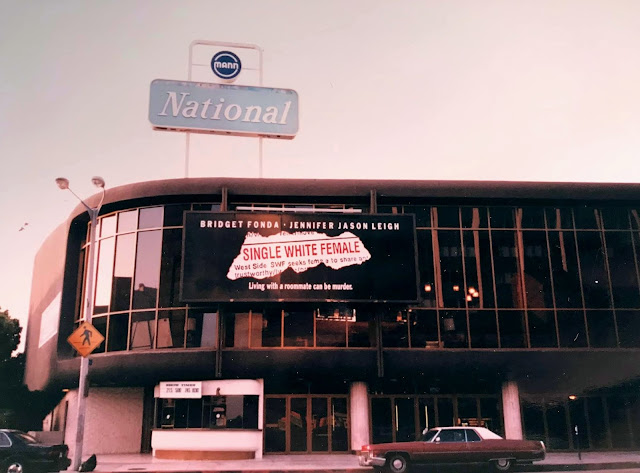 1992 - Thanks to Richard DuVal for sharing his photo. It's one he posted on the Cinema Treasures Facebook page. 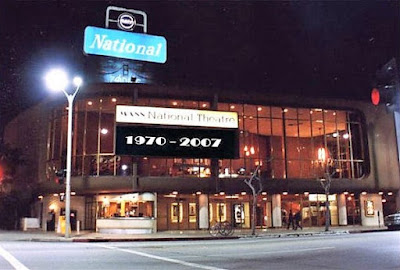 70mm runs at the National: Thanks to Michael Coate for compiling this list and sharing it in a post on the Friends of 70mm Facebook page.


More information: Many National Theatre fans have posted their laments (and notes about the great movies they saw there) on Cinema Treasures. And if you want photos -- especially lots of demolition views, there are over 250 to look at.

The Cinema Tour page, along with lots of photos, has a nice history of the theatre. Curbed L.A. ran a story titled "Westwood Woe: Love Letters To Demolished Mann Theatre."