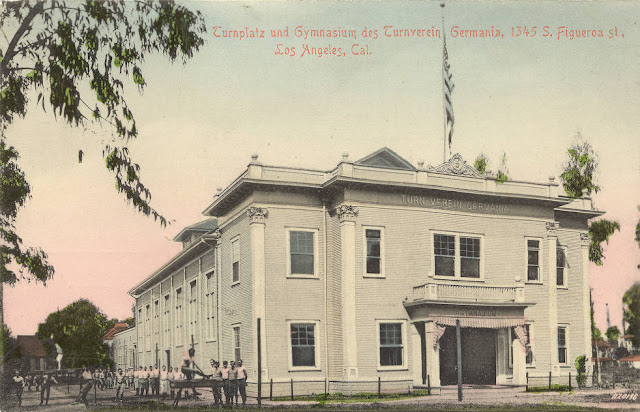 Opened: September 1872. The two story wood frame building was 50' long by 26' wide and could seat 400. Inasmuch as the acoustics were better than at the Merced Theatre, it was the site of many early musical performances. It was on the west side of the street just south of Pico Blvd.

The postcard is from the Indiana University collection. It can also be seen as part of Brent Dickerson's great Figueroa Street tour on his site "A Visit to Old Los Angeles." A photo of the building from 1905 is in the USC Digital Library collection.

Status: Demolished. The Turners website notes on their history page that this building was moved to 3rd St. between Broadway and Hill for use as a hotel. The original site on Figueroa is now part of the L.A. Convention center. 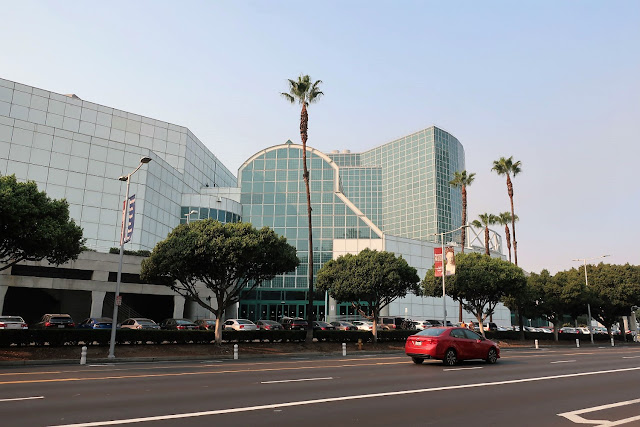 The site of the Turnverein on the west side of Figueroa St. Photo: Bill Counter - 2018

More Information: The Los Angeles Public Library has an 1880 program at the hall for the Owl Dramatic Club production of the operetta "The Sleeping Queen" and "Lavater, Or Not A Bad Judge." Also see the program inside view. They also have a cast portrait for a show called "Our Boys."

This building is mentioned in "Music Halls of Yesterday," an article from a 1948 issue of Overture Magazine that's in the USC Digital Library collection. See the website of the Los Angeles Turners for more history of the organization. The site has a pdf of an article "Los Angeles Turners Still Growing Strong" that offers some data.

The second Turnverein building at 229 S. Spring was later known as Lyceum Hall. It was just south of the Los Angeles Theatre (later called the Lyceum Theatre) at 227.

The organization would move again into a new building in 1894 at 323 S. Main Street. This 3rd building would later be known by many names, including the Regal Theatre.