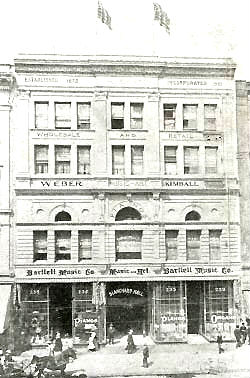 Opened: Blanchard Hall, also known as the Blanchard Music Hall, opened in 1899. The main hall was a second floor venue in the Music and Art Building with the Bartlett Music Store occupying the main floor. This c.1900 view appears in the "Broadway Part 2" chapter of Brent Dickerson's delightful "A Visit to Old Los Angeles."

The building was also known as the H. Newmark Building as it was built by and on the site of Harris Newmark's former residence. Mr. Newmark was a leading L.A. citizen who had arrived in 1853. The Mr. Blanchard was Frederick W. Blanchard, who had been influential in the music business in Los Angeles and went on to become the first president of the Hollywood Bowl. A biography is available from Trafford Publishing.

Architect: A.M. Edelman, a gentleman involved in a number of other theatrical projects including the Belasco/Follies on Main St.

Seating: 800. The venue was used for concerts and other programs. In addition to the main hall, the Society Hall was designed for chamber music and had a capacity of 500. A banquet hall had room for 300. There was also an Assembly Hall on the fifth floor seating 150. There was also space in the building for studios for 150 musicians and artists as well as a fourth floor art gallery. The seating data comes from a brochure that Mr. Blanchard sent to the publication "The International Studio" sometime around 1900. It's on Google Books.

Stage data: The hall is listed in the 1907-1908 Henry's Official Western Theatrical Guide, available on Google Books. The guide tells us that it was illuminated by both gas and electricity. The proscenium was 16' wide and 18' high with a stage depth of 25'. 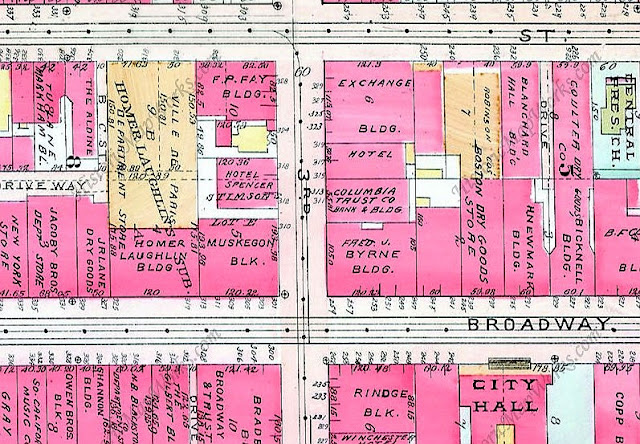 The building went all the way through to Hill St. from Broadway. Here the Hill St. end of the skinny building seen in the upper right is marked "Blanchard Hall Bldg." while the Broadway end is labeled "Newmark Bldg." It's a detail from plate 002 of the 1910 Baist Real Estate Survey map from Historic Map Works.

Closing: The building's closing date as a performance and studio space is unknown.

Status: Part of the building is still on Broadway. The Hill St. end has been demolished. The Broadway end was chopped down to a single story around 1959. 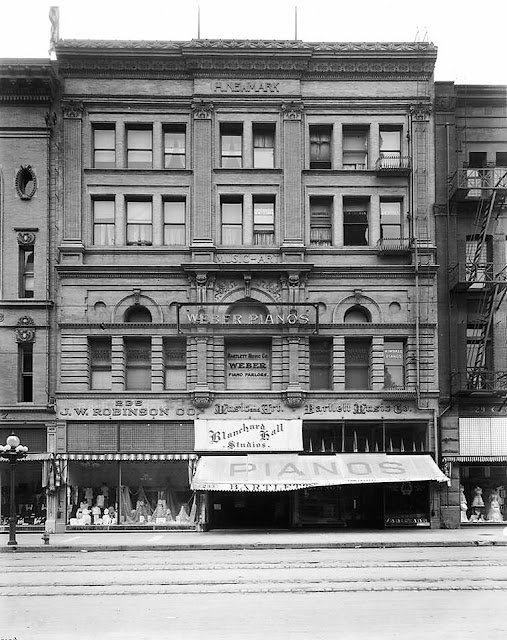 c.1910 - A photo in the USC Digital Library collection from the California Historical Society. The photo is also in the Huntington Library collection where it's attributed to C.C. Pierce as a 1905 photo. There's also a high resolution version on Wikimedia. 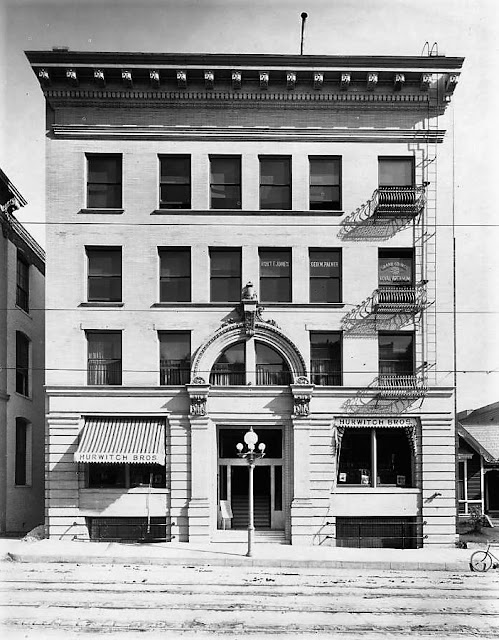 1910 - The Hill St. end of the complex. It's a California Historical Society photo appearing on the USC Digital Library website. 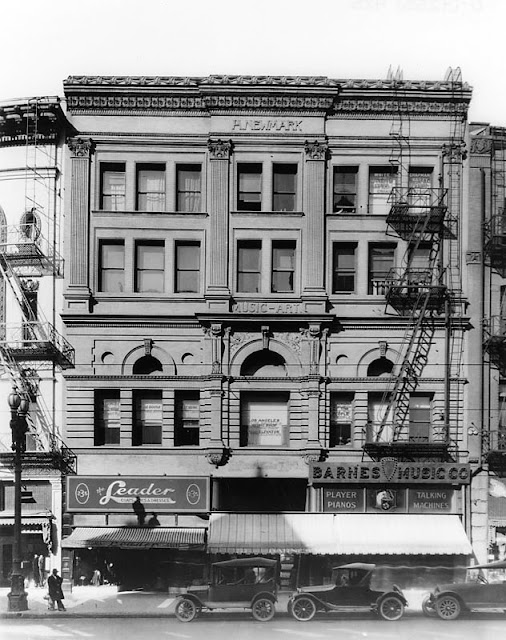 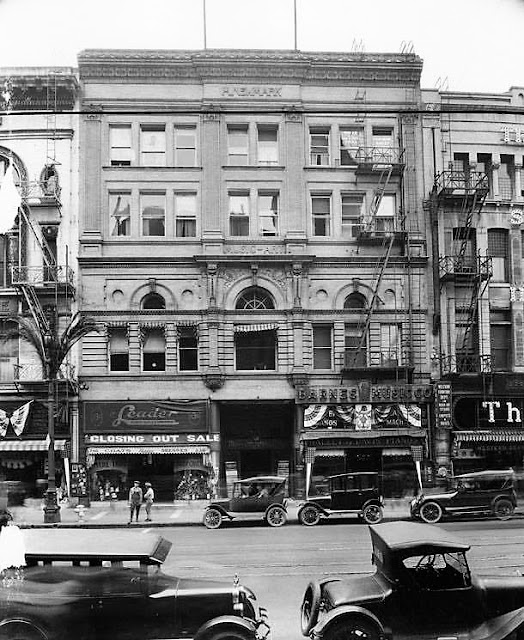 1928 - Thanks to Ken McIntyre for finding this one, added as a comment to a post about the building on the Photos of Los Angeles Facebook page. 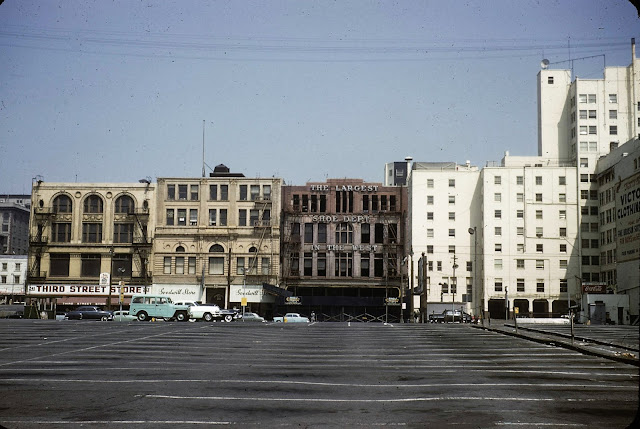 1958 - A photo  by Palmer Connor of part of the west side of the 200 block. It's on the Huntington Library website with this caption by Nathan Marsak: "Left to right: the Boston Dry Goods, Evening Express, Music Arts Studio Building and former site of the Bicknell buildings, shot from the site of the old City Hall, now the parking lot next to the City Hall annex (aka Hosfield Building, aka Victor Clothing)." 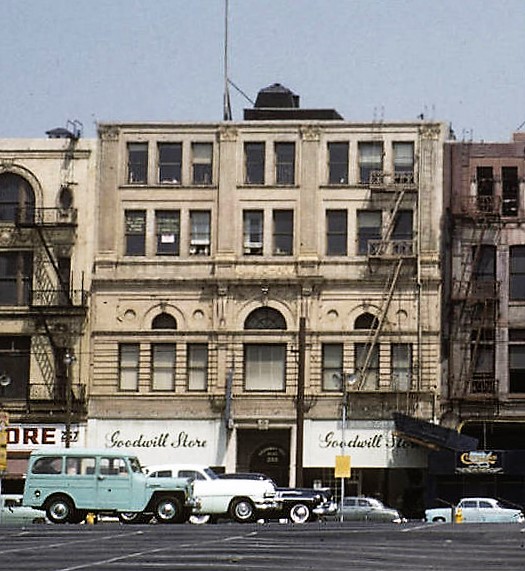 1958 - The Blanchard / Newmark Building shortly before it got chopped down to a single story. It's a detail from the photo by Palmer Connor.

1965 - At the time of this photo Goodwill was still in the Blanchard building, here down to a single story. We're looking west toward Broadway from Spring St. It's a Palmer Connor photo in the Huntington Library collection. Many thanks to Nathan Marsak, aka Beaudry, who located the two Palmer Connor photos for his Noirish Los Angeles post #21945. The Third Street Store, originally Boston Dry Goods, is now also down to a single story, currently occupied by a church. 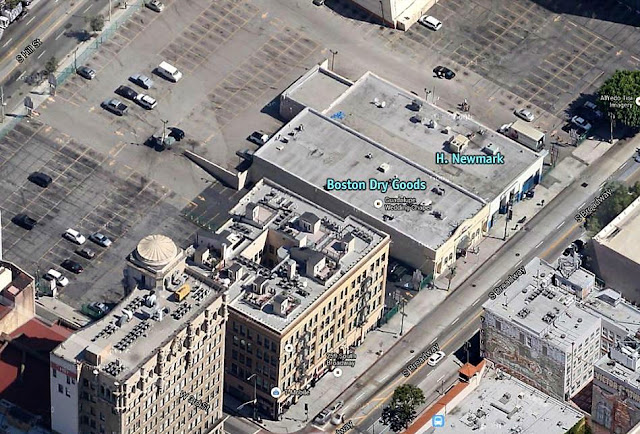 c.2014 - An aerial view with the Million Dollar Theatre in the lower left. Thanks to Noirish Los Angeles contributor WS1911 for including this on his Noirish post #21943 discussing the Blanchard / Newmark and its neighbor to the south, Boston Dry Goods. 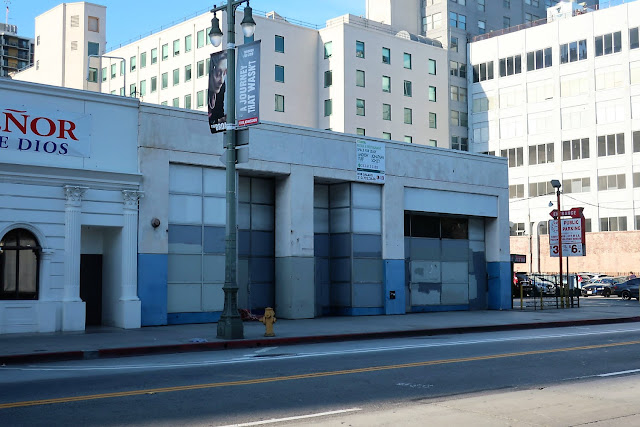 More Information: The building was profiled in "Building Devoted To Music and Art," a January 1, 1899 article in the L.A. Times. Blanchard Hall is discussed on page 48 of "Making Music in Los Angeles," available on Google Books. A photo of Blanchard Hall was included with "Music Halls of Yesterday," a 1938 article from Overture magazine that's in the USC Digital Library collection.

Blanchard Hall is mentioned along with a number of other performance buildings in a fascinating Southern California Architectural History post from 2012 by John Crosse that includes stories about Rudolf Schindler, Edward Weston and many other interesting personages. Thanks to Birthe Lauchengco for finding the article.