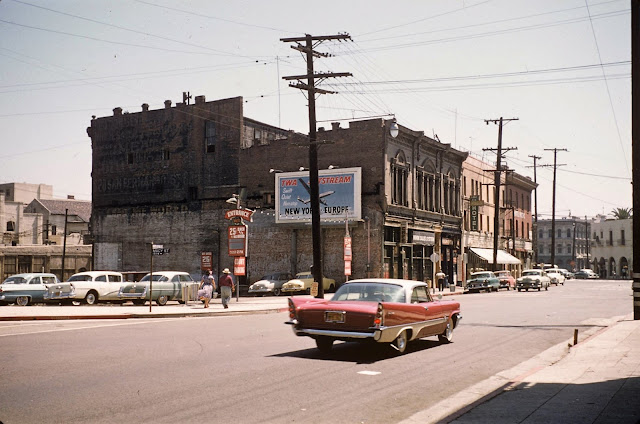 Opening: This theatre just a bit northwest of the Plaza was running with new operators in 1907. It's unknown if it was around before that. The name San Fernando is mythical. We have the address and many other details but research has not yet revealed the name of the theatre. It was in a storefront in the Sentous Block, a building bordered on the south by the 600 block of North Main St. The street on the building's north side, where the theatre was, has been known at various times as San Fernando St., Upper Main St. and, later, N. Spring St.

In this July 1957 Palmer Connor photo from the Huntington Library collection we're looking south on San Fernando St. toward N. Main from the intersection of Macy St. The building closest to us is the Sentous Block, here seen shortly before demolition. The theatre was once in the center storefront. In the distance there's a bit of the Pico House at the corner of San Fernando and Main. The Sentous Block, a design by R.J. Reeve, dated from 1886.

1907 was a bad year to be a kid in Los Angeles. In an attempt to avoid corrupting young minds, children under the age of 14 were barred by city ordinance from entering movie and vaudeville theatres unless they were accompanied by an adult. An organization called Associated Charities had teams going around vigorously enforcing the law, dragging kids out of theatres. Theatre owners were not just given citations but had warrants sworn out for their arrest. Child performers were also targeted unless they had special permits. The manager of the Ringling Brothers Circus was subject to an arrest warrant because he had an under age person performing as an aerialist. The Burbank theatre was in trouble for having a young person perform in a stock company drama.

The October 7, 1907 issue of the Los Angeles Express reported that warrants had been issued for the arrest of Mrs. M. Norton and Mrs. O. Andros, owners of this theatre at 618 San Fernando, because a volunteer reformer from Associated Charities had found fourteen kids under the age of 14 in the theatre. The ladies had just opened the theatre in September.

The story in the Express is mentioned on page 126 of John Fullerton's 2004 book "Screen Culture: History and Textuality." The incident is also related on page 208 of Jan Olsson's 2008 book "Los Angeles Before Hollywood - Journalism and American Film Culture, 1905-1915." It's available as a pdf from the National Library of Sweden.

Closing: It's unknown if the theatre survived beyond 1907. It's not in the 1908 or later city directories.

Status: The building the theatre was in was demolished in 1957. The block the building was on no longer exists -- it's now in the middle of the El Pueblo parking lot. San Fernando St. itself no longer exists as a designation. It was between N. Main and New High St. The block of San Fernando St. north of the parking lot has been renamed N. Spring St. with addresses above Cesar Chavez Ave. / Sunset Blvd. beginning at about 640. 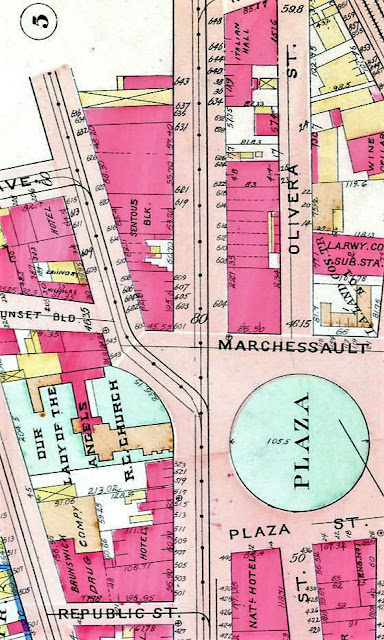 A detail from plate 003 of the 1910 Baist Real Estate Survey from Historic Map Works. The Sentous block is seen northwest of the Plaza between Main St. (running vertically up the middle) and San Fernando St. (taking off to the left at an angle). That street taking off to the left just north of the Sentous Block is Bellevue Ave. Just below the Plaza, the building labeled National Hotel is better known as the Pico House. The angled street seen in the lower left is New High St. 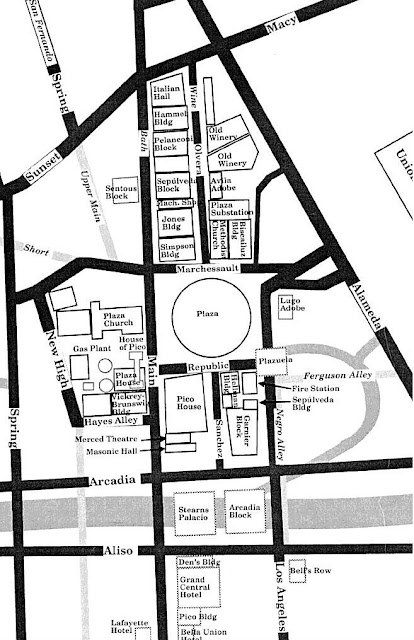 A map of the Plaza area showing current streets and buildings as well as ones that have vanished. The Sentous Block is seen here between Main/Bath St. and San Fernando St., the latter also labeled as Upper Main and Spring St. That's the 101 between Arcadia St. and Aliso St. This is a detail from a larger map from Howard Hurtig Metcalfe on the website La Nopalera. Also of interest on the site are the Plaza Tour and the Picture Gallery of Los Angeles History. The latter page also has other maps of interest. Thanks to Noirish Los Angeles contributor GS Jansen who spotted the map for his Noirish post #4314. 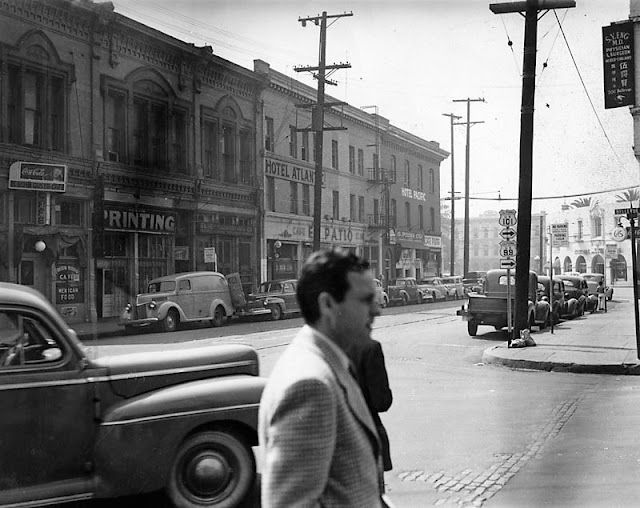 Looking south from the corner of San Fernando/N. Spring and Bellevue Ave. toward the Pico House. The Sentous Block is on the left. The theatre was once in the center storefront, where the print shop is in this photo. Thanks to Noirish Los Angeles contributor GS Jansen for finding the Los Angeles Public Library photo, appearing on his Noirish post #1354. 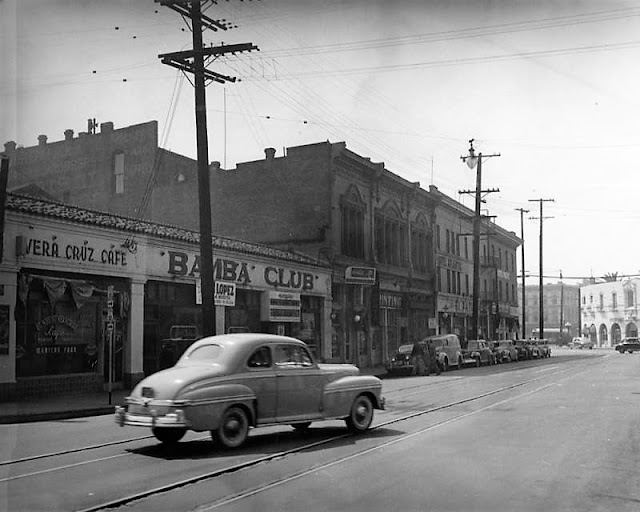 A wider c.1940 view, again looking south. It's a Los Angeles Public Library photo. This side of the Sentous Block it's the Bamba Club. In the 1949 film "Criss Cross," it plays the bar and club called the Round Up. See Beaudry's Noirish Los Angeles post #1358, post #1359, post #1360 and post #1361 for many shots of the area from the film. Also see the pages about Bunker Hill and film noir on American Film Noir. 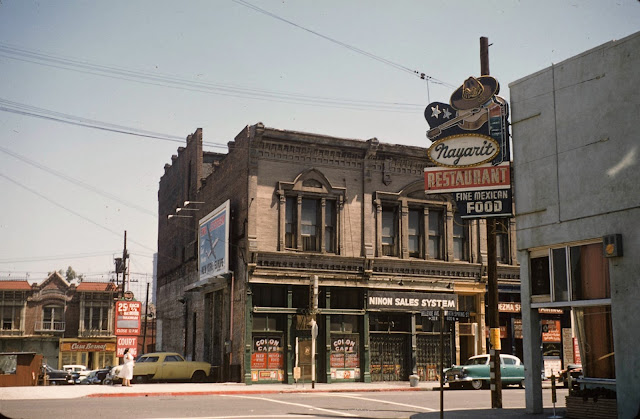 A 1957 Palmer Connor photo taken at the corner of San Fernando/N. Spring and Bellevue Ave. At the time Ninon Sales System was in the former theatre location. The photo is in the Huntington Library collection. Nathan Marsak notes on the Huntington's website that on the left in the distance it's the 1887 Sepulveda House. 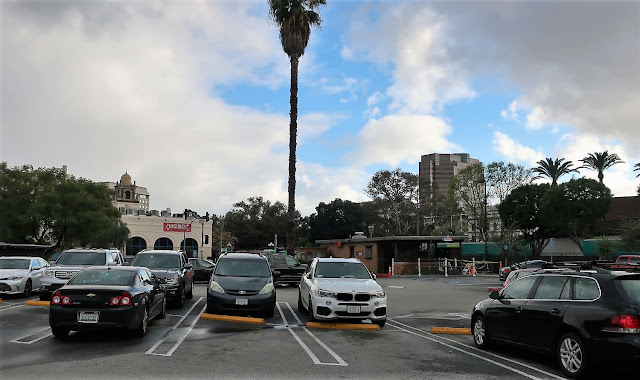 Looking south along the missing block of San Fernando/N. Spring toward the theatre's site with a bit of the Pico House in the distance through the trees on the right. Photo: Bill Counter - 2019


The Main St. side of the building: 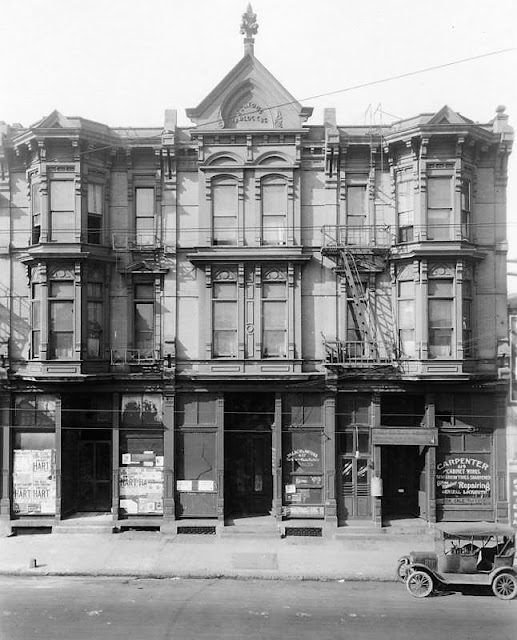 A 1920 view of the Main St. side of the Sentous Block. The theatre's storefront would have been around on the other side. The photo is in the Los Angeles Public Library collection. Also in the collection is a 1940 view of the upper two stories of this side of the building taken by William Reagh. 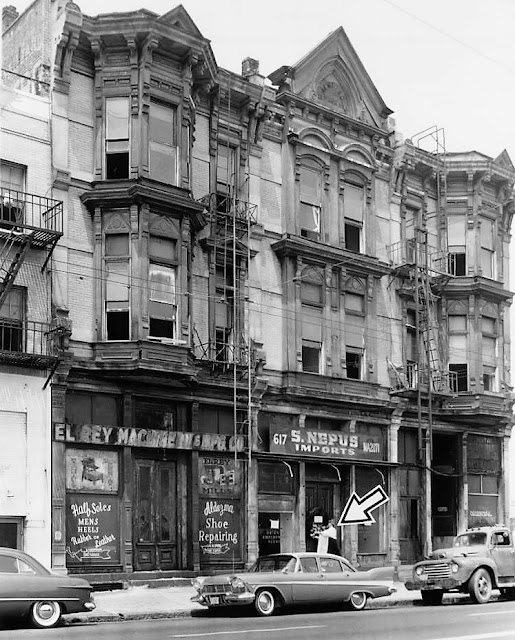 An August 1957 L.A. Examiner photo, again of the Main St. side of the building. The photo is in the USC Digital Library collection. It appeared in the Examiner with this piece written by Jack Massard:

"Mrs. Christine Sterling (arrow) nails black wreath on door -- For some people, old buildings should just get older and never die. That's how Mrs. Christine Sterling, so-called 'Mother of Olvera Street' feels about the old Sentous Building at 617 North Main Street. -- Yesterday she received word that the 77-year-old building would be torn down for a parking lot. -- 'It's like tearing out a page of our history,' Mrs. Sterling sighed in her house on Olvera Street. -- 'For awhile, Governor Pio Pico (the last Mexican governor of California) spent his declining years in an apartment there. It once housed the Wells Fargo office.'

"Mrs. Sterling was one of those who changed Olvera Street from a disreputable alley to a popular tourist attraction in the 1920s and led to the current project to rebuild the area around into a replica of the old Mexican 'Pueblo De Los Angeles.' -- 'I had always hoped that the Sentous Building would be included in the city, county and state's plans to restore the Plaza area. But it looks like another part of our past is going to be carried away in a truck.' -- So, yesterday, her rebozo over her head, Mrs. Sterling nailed a three-foot diameter wreath on the floor of the old Sentous Building." 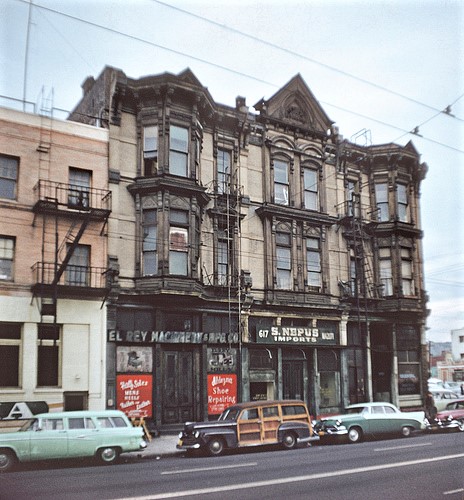 A 1957 George Mann photo of the Main St. side of the building appearing on the "All the More Mann" page of the site On Bunker Hill. On the page Nathan Marsak offers these comments about the building:

"This is the Sentous Block, designed in 1886 by R. J. Reeve; the same year Reeve designed the U. S. Hotel and the Phillips Block. Louis Sentous was one of the great French pioneers of Los Angeles who’d arrived penniless, panned for a little gold and became a successful cattle rancher, trading meat and dairy at the Plaza until he bought the nearby piece of property (bounded by Sunset, Spring, Main and Macy) that was to bear his name.

"The Sentous Block is best known around noirsville as where Mike Hammer cruises over to the Jalisco Hotel in 'Kiss Me Deadly'; it also contained the Bamba Club, which doubles as the Round-Up in 'Criss Cross.' (Both on the Spring St. side of the Sentous; our image shows the Main St. side.) For more than you would ever want to know about this, go here (seems like contributor Beaudry needs a girlfriend or something). Louis lasted until 1911; his building til 1957."

More information: See a fine block-by-block rundown of historic Main St. on the "Main Street" post of the site Victorian Downtown Los Angeles. Although somehow they have the Sentous Block listed in their 400-500 Main category. Thanks to Linda Hammonds for adding a link to that article in the comments to her post about the building on the SoCal Historic Architecture Facebook page.

The arrests of the proprietors of the theatre at 618 San Fernando St. were  mentioned in an October 13 L.A. Times story by Harry C. Carr titled "The Film Show Boom in Los Angeles and Some of its More Vivid Results."  He discusses the state of moviegoing in general and also has comments, many of them racist, about movie theatres in the Plaza area, what he calls "Sonoratown." Here it is: