Opened: In 1876 showman Colonel J.H. Wood opened the venue as Wood's Opera House. An address before the last round of street renumbering was 310 N. Main. It was a two story building with the theatre on the 2nd floor that was located on the east side of the street several buildings south of the Pico House.

The Colonel Wood who opened this house was evidently unrelated to one who was more famous, at least in architectural circles. Colonel J.M. (James Madison) Wood was a noted theatre architect of the era, based in Chicago. There was also a George Wood who was a showman.

Thanks to Trav S.D. for the lovely report about Wood in his 2021 Travelanche article "Can't See the Forest for the Woods: Two (or more) Great Dime Museum Impresarios." See his post for details. A few of his comments:

"A few scraps about the mysterious impresario(s) whom many writers in exasperated defeat refer to simply as 'Wood.' What follows are the theatrical activities of two, possibly more, men. The difficulty is the variations on the name one encounters. The first gent is usually rendered as Colonel J. H. Wood. I've seen both John and Joseph given as his first name, as well as the initials E.L rather than J.H. There was also a George Wood, whose activities are so similar to the Colonel's that the pair were often confused with one another, for they often operated in the same jurisdictions...

"Colonel J.H. Wood... was, all would agree, a student of P.T. Barnum. The first reference I find to him is... 1851 [running] Wood’s Cincinnati Museum, a decade after the founding of Barnum’s American Museum... In 1853 Wood took a leaf out of Barnum’s playbook once again, this time by mimicking his lucrative tour with Swedish Nightingale Jenny Lind. Wood’s answer to Lind was the former slave Elizabeth Greenfield, known as the Black Swan... By the mid 1850s he had established Colonel Wood’s Great Museum of Living Wonders in Philadelphia. This institution, like its Cincinnati predecessor, was a dime museum, this one clearly with an emphasis on human anomalies (i.e. 'freaks').

"In 1855 Wood finally joined forces with his hero when the two toured with Barnum and Col. Wood's Grand National Baby Shows. This was at the climax of a national craze for infant beauty pageants... In the late 1850s and early '60s one finds references to Colonel Wood’s Grand Traveling Museum, a touring version of his Museum of Living Wonders, in cities like Hannibal, Missouri and Cleveland. In the 1860s, Wood began some truly impressive expansion, extending his brand in several major cities in a way that Barnum never did until he went into the circus business. In 1863, he purchased the collections of the St. Louis Museum and founded Colonel Wood's Museum a.k.a. the Chicago Museum, one of the few museums in the country to rival Barnum's in scale... Wood’s Chicago Museum was destroyed by fire multiple times... By 1869 Wood was also running his Oddity Museum at 9th and Arch Streets in Philadelphia...

"In 1876 Wood, having divested himself of his New York holdings, went west. First he managed the Palace Opera House in San Francisco for David Belasco. He next opened Wood’s Opera House in Los Angeles, presenting boxing exhibitions and bawdy farces...."

Wood's was only 4 doors south of the Merced Theatre and the greater opulence of the new theatre helped cause the demise of the Merced. The Los Angeles Herald has many tiny mentions of various shows at the theatre. The June 30, 1876 Herald commented about cowhiding:

"Yesterday about half past one o'clock John Lathrop, a well known hack driver, was cowhided by an actress of Wood's Opera House. The cowhide was laid on with brawny muscle and John took it like a man. The actress' husband was at hand and when Lathrop attempted to strike his assailant the husband gave him several blows with a cane which assisted in his demoralization. The cause of the assault was an alleged insult at the Opera House last night."

"The happiest men in town can be found at Wood's Opera House."

Also in the same issue:

"Every lady is well treated at Wood's Opera House."

"Go to Wood's Opera House and then to the race track."

The Herald issues are on the website of the California Digital Newspaper Collection.

The theatre was running at least into June 1878 but soon Mr. Wood was bankrupt and the theatre closed. It reopened in 1883 as the Our Club Theatre, a variety house. It's in the 1886-7 city directory as being under the direction of the Perry Bros., who also listed the premises (310 N. Main was the address at the time) as their residence. Some accounts just call it the Club Theatre. 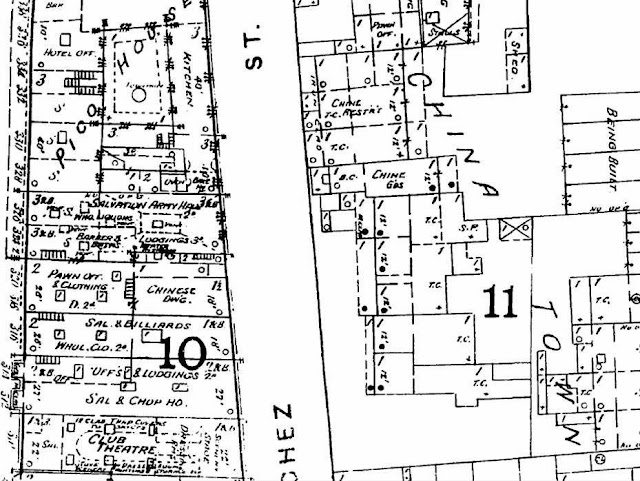 The Club Theatre is shown in the lower left of this section of an 1888 Sanborn real estate map that's in the Los Angeles Public Library collection. Main St. is off to the left. Note the Pico house in the upper left. The poor Merced Theatre just to its south has by this time been turned into a Salvation Army Hall. Thanks to Noirish Los Angeles contributor Flying Wedge for including this map (and others) in his Noirish post #14168 about the Merced Theatre.

The Perrys (E.H. and J. H.) later closed this one and went over to the new Tivoli Theatre (which later, under other management, was called the Cineograph) for a brief fling in 1890. The Perry boys get mentioned in a December 18, 1890 L.A. Times piece about the closing of the Tivoli.

Closing: The closing date of the Wood's/Club Theatre is unknown. On an 1894 Sanborn map it's renumbered as 410 N. Main and listed as vacant.

Status: It's been demolished. The building was evidently around as late as 1948. The hotel building south of the theatre, on the corner of Main and Arcadia, went first. The end of the block where it was located got shaved off during construction of the 101 and Arcadia St. was moved north. The theatre building had been on the east side of Main about where the sidewalk on the north side of Arcadia St. is now. 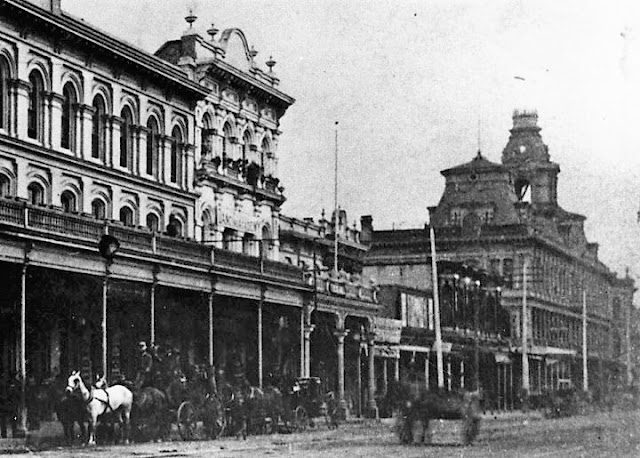 1888 - Looking south across the facades of the Pico House and Merced Theatre. Wood's is the two story building with the flat second floor facade just to the left of the telephone pole right of center. Down beyond Arcadia St. is the Baker Block. It's a photo in the Los Angeles Public Library collection. 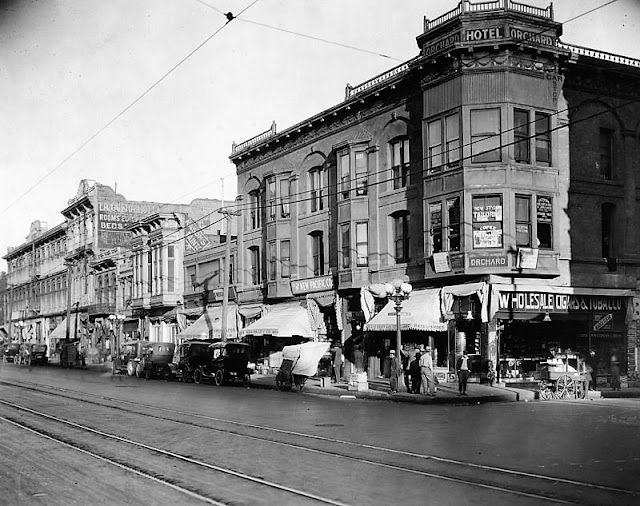 1920 - Looking north from Arcadia St. The corner building on the right is the Orchard Hotel. The squat building just to the left of it is the former home of Wood's Opera House. It's a photo in the Los Angeles Public Library collection. 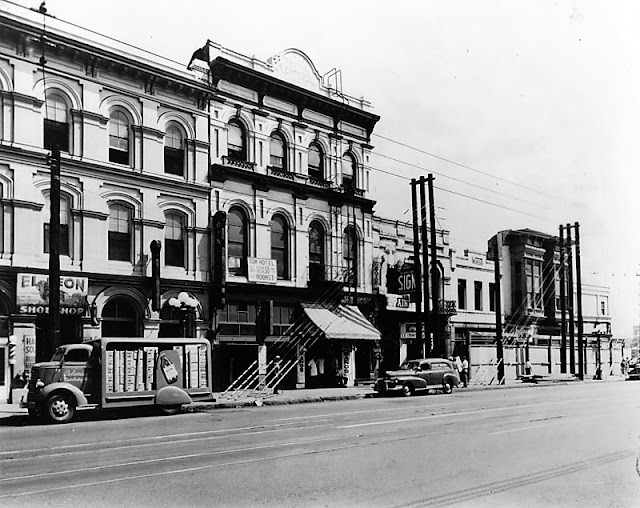 1945 - A William Reagh photo from the Los Angeles Public Library collection. The squat two story building on the far end is the former Wood's Opera House. 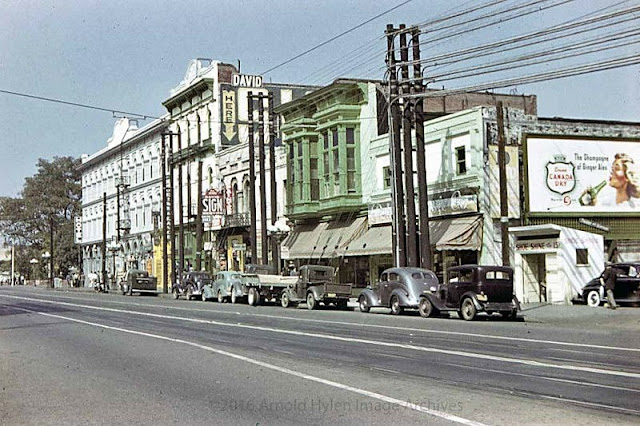 mid 1940s - An Arnold Hylen shot looking north toward the Plaza. The building nearest us once housed Wood's. Thanks to Mr. Hylen's grand-niece Greta Gustafsson for posting the photo on the Arnold Hylen Photographer - Los Angeles Images of an Era 1850-1960s Facebook page. John A. Pappas notes that the photo is 1948 or later as there's a trolley coach feed bracket on the span wire. 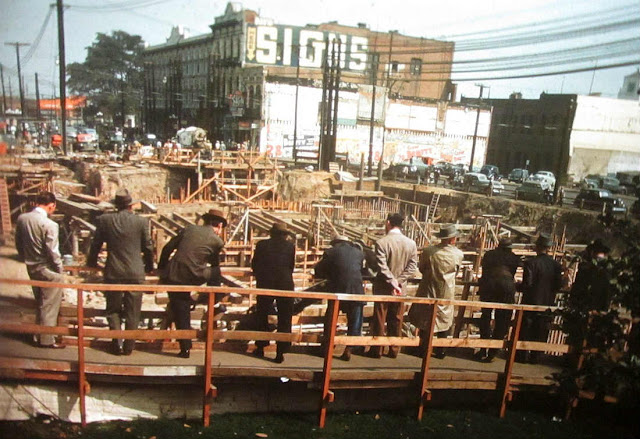 c.1950 -  The building once housing Wood's is gone. The Masonic Hall, Merced Theatre (with "SIGNS" on the side) and the Pico House are the only survivors on the east side of the 400 block.  The photo was taken during the construction of the 101. Thanks to Noirish Los Angeles contributor Ethereal Reality, who found the shot on eBay for his Noirish post #17274. 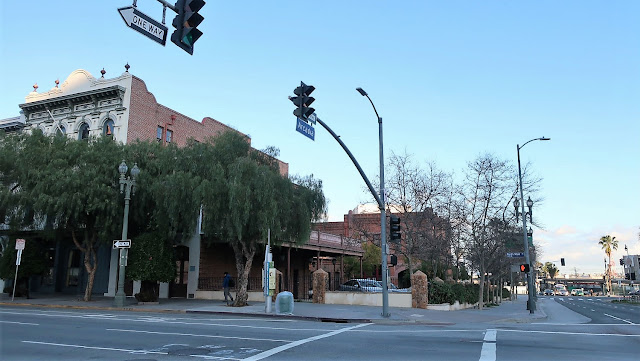 2019 - Looking east down Arcadia St. at what was once the location of the south end of the 400 block. Wood's would have been about where the sidewalk down Arcadia St. is now. Photo: Bill Counter 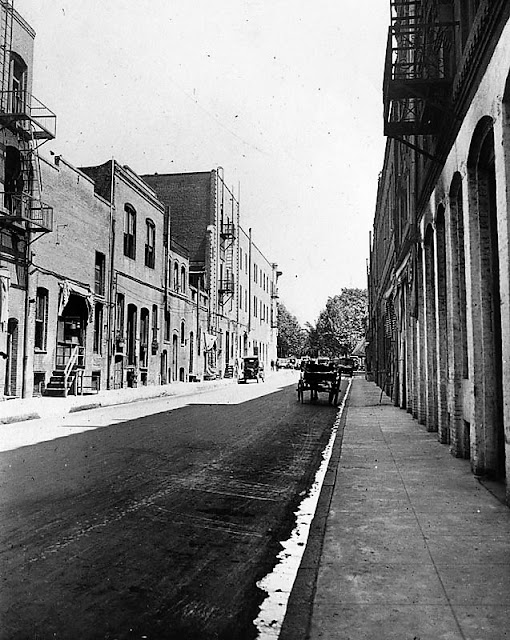 1921 - A look up Sanchez St. toward the Plaza. The photo is from the Los Angeles Public Library collection.

Close to us on the left, we get the edge of the Orchard Hotel building at the corner of Main and Arcadia St. The second building with the blank wall on the second floor is the stage end of what had been Wood's Opera House. The tallest building beyond is the Merced Theatre. Just before the Plaza is the back of the Pico House. 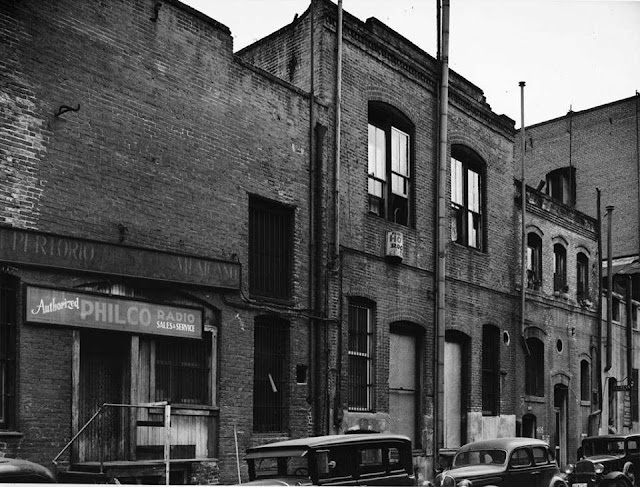 c.1935 - On the left, a view of the stage end of the former Wood's Opera House. At the far right we get a sliver of the south wall of the Merced Theatre. Thanks to Robert Klaus for posting the photo on the Facebook group Historical Photos of Los Angeles.

More Information: Well, there doesn't seem to be any.