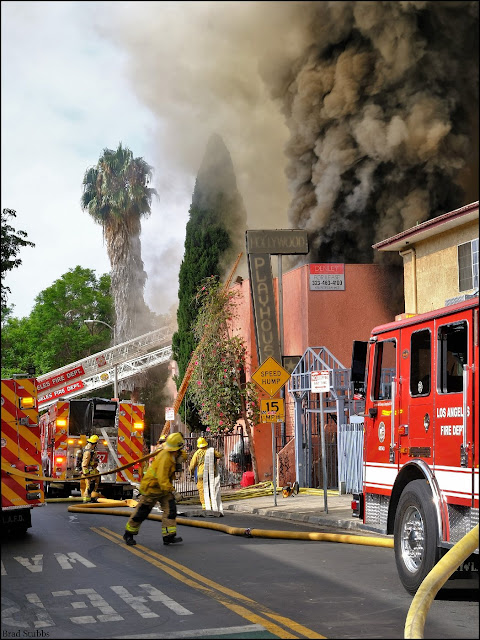 Opening: It's unknown when the Hollywood Playhouse opened. It's certainly had a few remodels but the city gives a 1905 construction date for the building. Thanks to Brad Stubbs for capturing this July 13, 2022 photo of its demise.

This small legit operation and occasional film house was located on the west side of Las Palmas just south of Sunset Blvd. The address sometimes appears as 1451 N. Las Palmas. It's had a number of names including the Actors Center, the Comedy Playhouse, Hollywood Center Theatre, Writers' Club Theatre and the Theatre VII.

Seating: 244 in the larger space. There was a second space upstairs with a capacity of 24.  Amenities included a kitchen and a large patio.


Architect: Unknown. At the time of construction this block of Las Palmas south of Sunset was called Estelle Ave. It's not a block that is mapped on the 1907 Sanborn Real Estate Map that's in the Library of Congress collection. 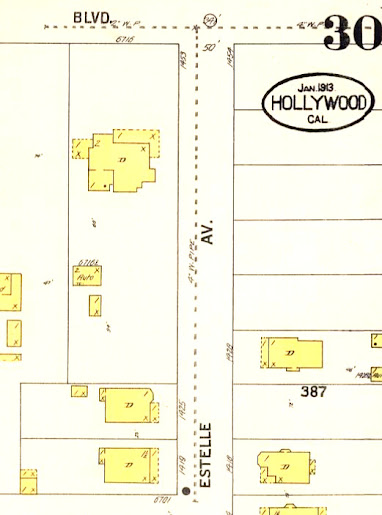 The building is the top one seen in this detail from image 30 of the 1913 Sanborn Map that's on the Library of Congress website. Estelle Ave. (now Las Palmas) is two blocks east of Highland. That's Sunset Blvd. at the top of the image. The map doesn't indicate any particular use for the building at the time.
Floorplans c.2016: 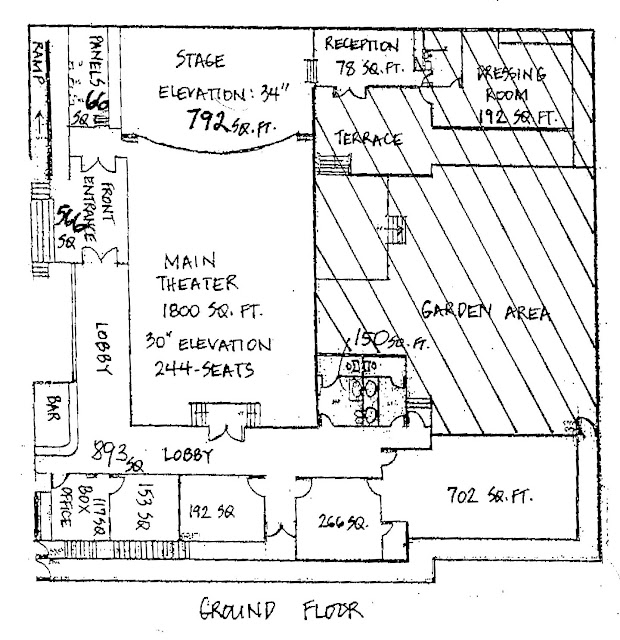 A main floor plan. Las Palmas Ave. runs along the left edge of the drawing. The cross hatched areas evidently had been rented at the time the plan was drawn. These are from the building's 2016 listing on Loopnet.

A 2nd floor plan, again with Las Palmas on the left.
History: It's unknown when the building was first used as a theatre.

It's discussed in one of Roger Delfont's articles archived on the site Ad Sausage that analyzes ads for different theatres that appeared in the Los Angeles Free Press:

"The Hollywood Center Theatre moved between film and legit theatre, depending on who rented its facilities. For a brief period, the spot was known as the Writers' Club Theatre - perhaps due to the original Writer's Club being located nearby, on the corner of Sunset and Las Palmas. Primarily, community theater was its bread and butter. Everything from 'The Caine Mutiny' to the musical-satire 'Unisex '72'..."
In 1964 it was being called the Hollywood Center Theatre and running a production of "Cyrano de Bergerac." In 1965 Gerald Gordon's Los Angeles Youth Theatre production of "The Fantasticks" moved over from the Le Grande Theatre (the former Hollywood Canteen). The world premier of the children's musical "Wind in the Willows," with music by Academy Award winning composer David Raksin, opened in the Spring of 1966. In 1967 the Youth Theatre's annual Christmas production for children was a Gerald Gordon musical version of "Rumpelstiltskin."
And then by 1968 the venue was running porno.

A 1968 ad for the Hollywood Center running films for unshockable adults.

"The next chapter for the Hollywood Center Theatre started in 1969, when the venue became Theatre VII ('Where friendliness is Contagious') and acts such as Charles Pierce (The Master of Camp) hit the boards. A year later, and now advertising itself as 'The only gay theatre like it anywhere!' -- the Mark VII offered Live Male Stage Shows. The name didn't hold; the new moniker was gone a few years later, but male oriented material continued from the likes of Casey Donovan 'The Back Row' (Doug Richards), Gary Yuma 'Fun Farm' and Calvin Culver 'Tubstrip.' 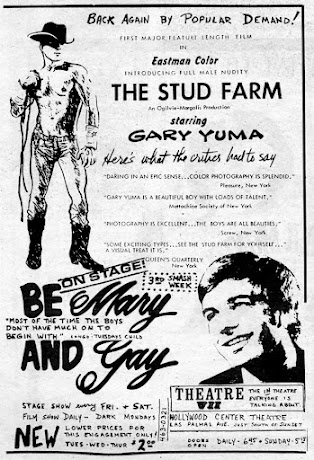 A January 1970 ad for the venue as Theatre VII appearing on a Ad Sausage page.

"In the mid-70's, all sorts of esoteric theater groups staged shows. The Media Center for Community Action staged 'Soul Alley', featuring Felton Perry... Adding to yet another chapter in the building's history, the venue was home to the Sherwood Oaks Experimental College (once located at Crossroads of the World on Sunset) in the early-80's; offering workshops and record engineering classes. Various name changes occurred throughout the next decade; the Actors Center, the Comedy Playhouse and back to the Hollywood Playhouse."

In the mid-1980s the building got a million dollar remodel resulting in a new theatre space and a restaurant. It was intended to be the anchor for a new development but nothing else transpired. It was a project of the Atlantic Gulf and Pacific Development Corporation and the F.H.M. Corporation with Budd Friedman, Michael Nouri, Stan Handman and Norman Maibaum as principals.
In later years the building had been used as the Howard Fine acting school and as an events space. By 2019 it was vacant.
Status: The theatre was destroyed by fire on July 13, 2022 and is scheduled for demolition. ABC 7 News had good aerial footage. Thanks to Jason Vega and Russ Jones for spotting the story. It's also on the ABC 7 Facebook page. Nathan Solis did a followup story for the L.A. Times about two people being detained as a result of the fire.
The building was vacant and available for lease at the time of the fire. The broker listed on the signage was Kris Peterson at Denley Investment and Management, 213-463-4100. The firm, which has had all sorts of issues about code violations at some of its buildings, is headed by Mehdi Bolour.
The theatre in the Movies: 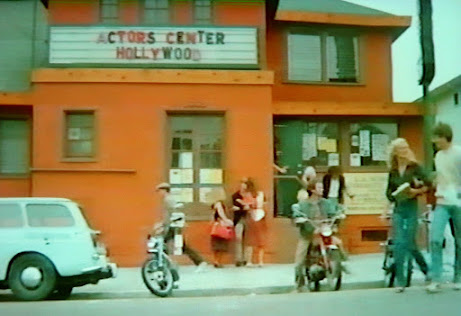 Dinah Manoff's character is taking classes at the Actors Center Hollywood in the Herbert Ross film "I Ought To Be In Pictures" (20th Century Fox, 1982). She's come west to be in the movies but also to reconnect with her long-absent father, played by Walter Matthau. She was under the impression that he's a famous writer but he's definitely on the far fringes of the business. Ann-Margret plays Matthau's girlfriend. It's based on a Neil Simon play. The cinematography was by David M. Walsh. 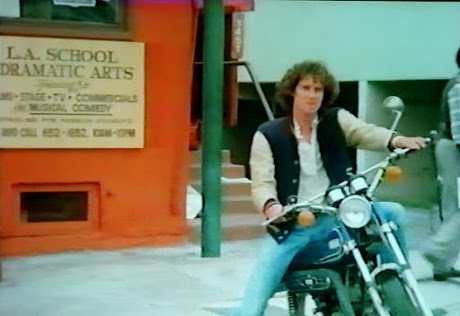 Another look at the building, here with the signage calling it the L.A. School of Dramatic Arts. Thanks to Jason Vega for spotting the IMD listing that noted the theatre was a filming location. The facade got a big remodel later in the 1980s.
An interior view: 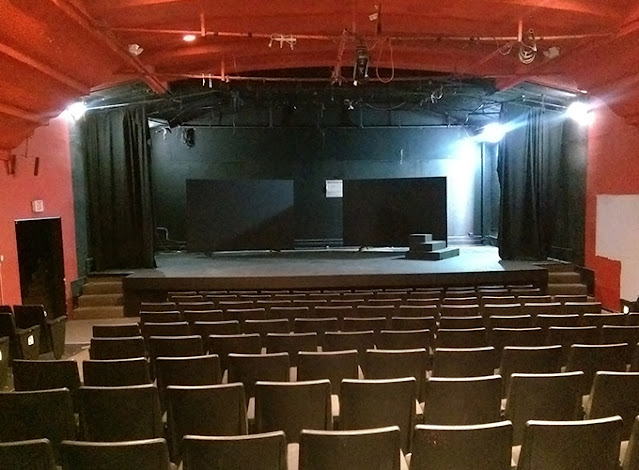 A photo from the building's 2016 listing on Loopnet. Thanks to Jason Vega for locating it. 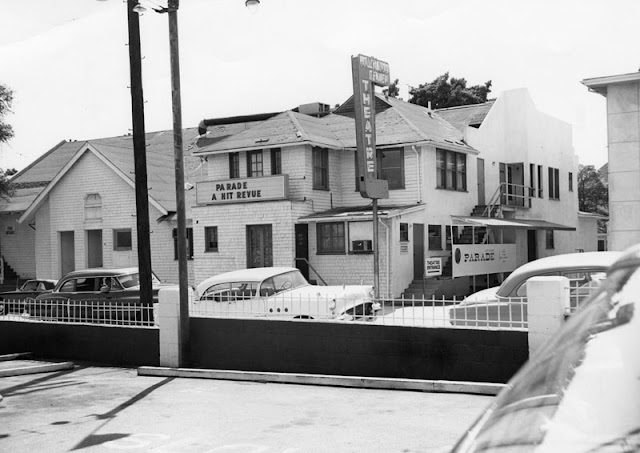 1961 - "Parade - A Hit Review." A view of the building as the Hollywood Center Theatre from the Los Angeles Public Library collection. 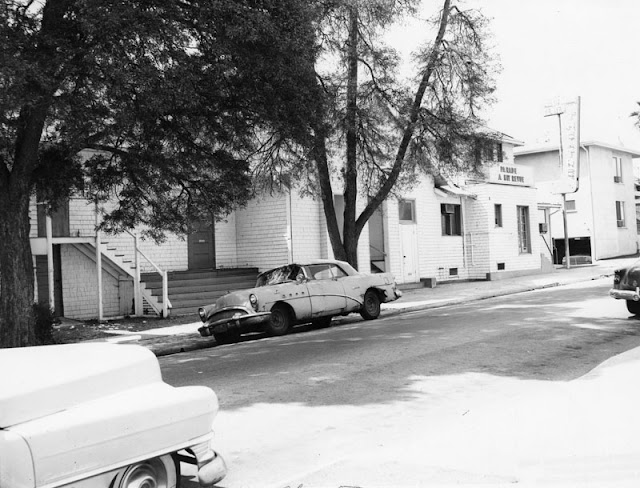 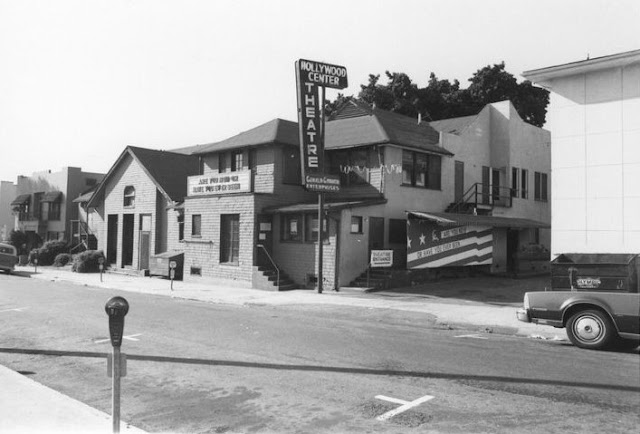 1976 - Thanks to the Bruce Torrance Historic Hollywood Photographs collection for this view. It's their #T-022-1. On the readerboard: "Are You Now Or Have You Ever Been." 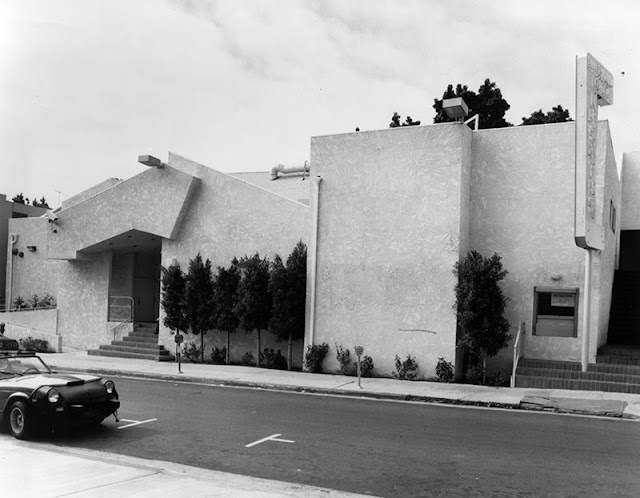 c.1985? - An undated Los Angeles Herald Examiner photo of the building as the Hollywood Playhouse from the Los Angeles Public Library collection. The caption was:

"Exterior view of the Writers' Club Theater in Hollywood. This historic theater dated back to the days of Charles Chaplin and Mary Pickford reopened as the Hollywood Playhouse & Cafe following a million dollar remodeling. Located at Sunset and Las Palmas Boulevards, the complex centers on a new 220-seat theatre and restaurant that are to serve as the cornerstone for a shopping center and office complex planned by the Atlantic Gulf & Pacific Development Corporation. Heading up the theatre-restaurant complex are Budd Friedman, Michael Nouri (for Atlantic Gulf & Pacific Development), Stan Handman and Norman Maibaum, under the banner of the F.H.M. Corporation." 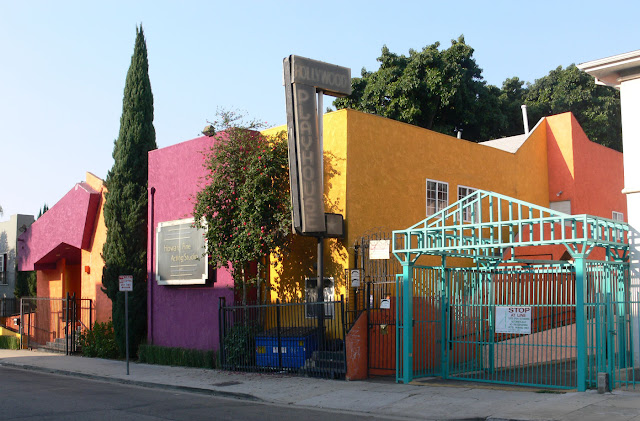 2008 - A photo by Andreas Praefcke that appears on Wikipedia. 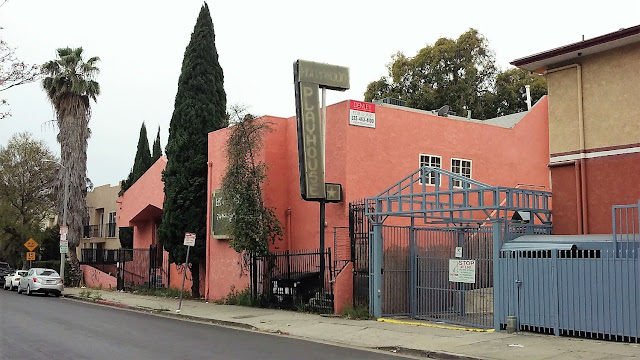 2019 - The view south along the vacant building. Photo: Bill Counter 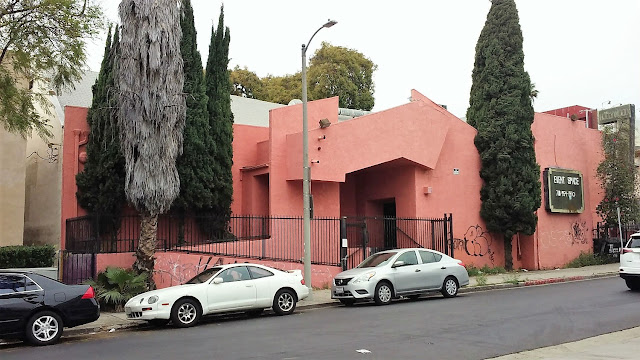 2019 - The facade from the post office across the street. Sunset Blvd. is less than half a block off to the right. Photo: Bill Counter 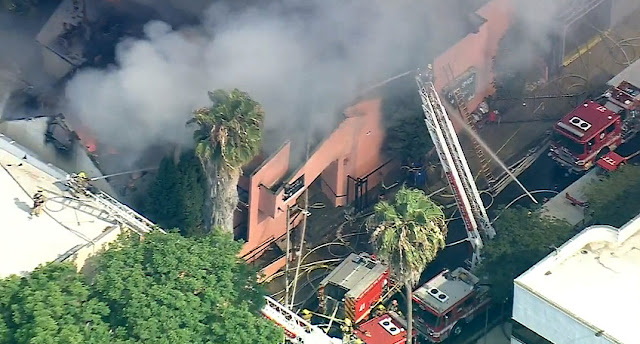 2022 - On fire on July 13. It's an image from the ABC7 News footage. Thanks to Jason Vega and Russ Jones for spotting the story. It's also on the ABC7 Facebook page. 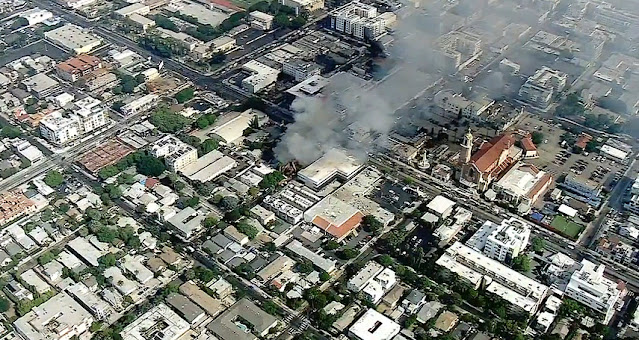 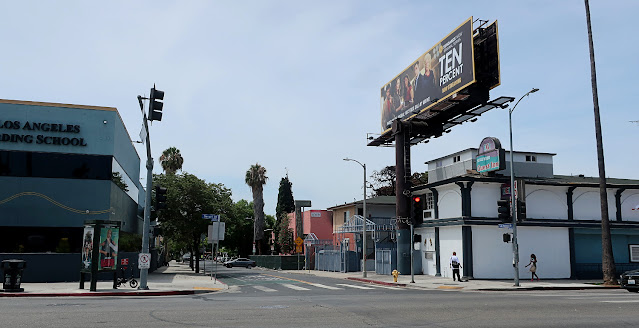 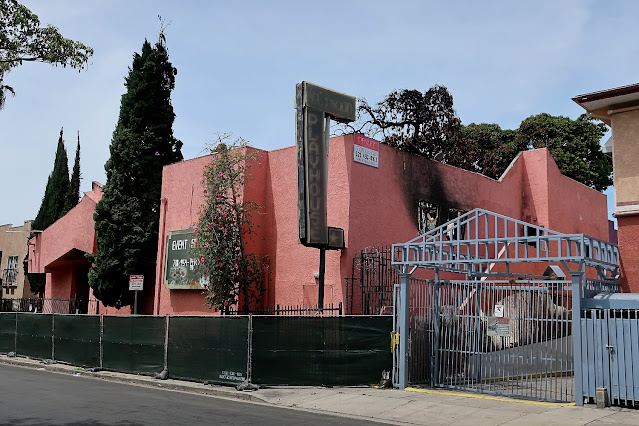 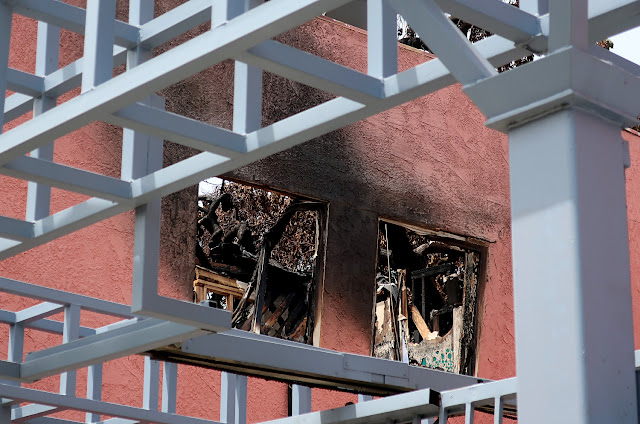 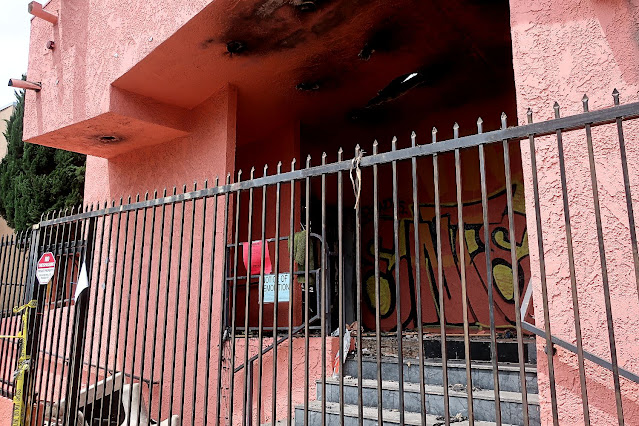