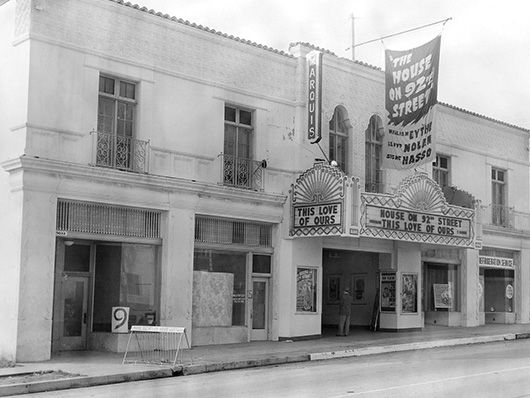 Opened: It opened November 11, 1925 as the Marquis Theatre with the film "The Beautiful Cheat." At the time, this part of town was known as Sherman. The location was just east of Doheny Dr.

The 1945 photo is from the collection of the Academy of Motion Picture Arts and Sciences and appears on their page "Academy Story - 1940-1949." When they acquired the building it was renamed the Academy Award Theater. Thanks to Noirish Los Angeles contributor BifRayRock for the find. It's on his Noirish post #37331 which also discusses several other theatres named Academy. 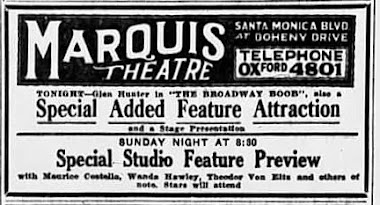 Thanks to Ken McIntyre for locating this June 1926 ad for the Marquis.

The Arcadia publishing book "Theatres in Los Angeles" notes that in 1929 it got an installation of the Colorart Synchrontone sound system. The theatre was operated for decades by Fox West Coast.

AMPAS arranged to buy the building in December 1945. They would soon take down the deco marquee. It was their offices, the site of screenings, and the venue for the 1948 Academy Awards ceremony, held in March 1949. The story was that the Academy was feeling a financial pinch that year due to lack of support from the studios and didn't want to splurge on renting a big theatre.

The Writers stayed in the building until 1978 according to a comment on page 112 of the book "Crossroads of the Stars" by Dennis Sarniske and Stanley J. Sarniske. They were operating on a conditional use permit that was contingent on providing additional parking by a certain date. The parking wasn't taken care of and the county declined to renew, forcing a move.

Thanks to Noirish Los Angeles contributor Tovangar2 for the research on the Writers Guild era. See Noirish post #41951.

Status:  The property was sold and the theatre was demolished. It's now the site of an office building and parking. 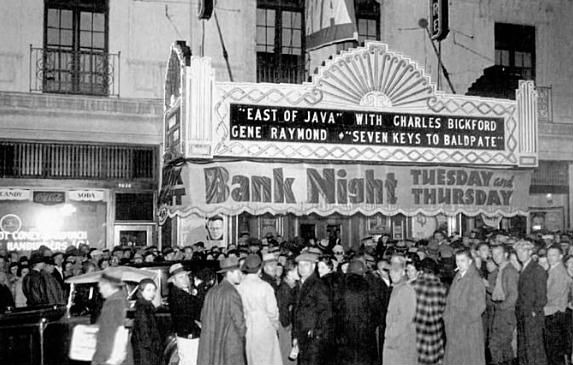 A 1936 look at the crowd for a show at the Marquis. The photo appears on page 86 of "Theatres in Los Angeles" by Suzanne Tarbell Cooper, Amy Ronnebeck Hall and Marc Wanamaker. The rare photos in the book are from Mr. Wanamaker's Bison Archives. There's a preview to browse on Google Books.

The photo also appears on the Facebook page Photos of Los Angeles (plus a re-post). It can also be seen in the AMPAS Tom B'hend and Preston Kaufmann Collection where they note it's a photo taken by Charles Rhodes. 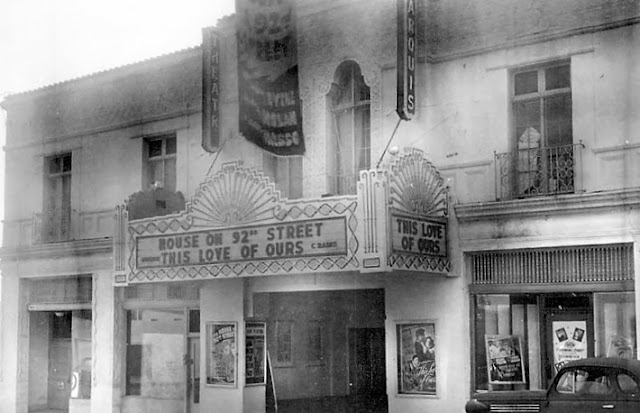 A 1945 photo that appears on page 111 of Marc Wanamaker's fine Arcadia Publishing Book "Hollywood 1940-2008." The page with the photo is on the Google Books preview. Note the same double bill as the photo from the AMPAS website. Henry Hathaway's "The House on 92nd St." with William Eythe and Lloyd Nolan was a September 1945 release. "This Love of Ours" was out in November 1945. 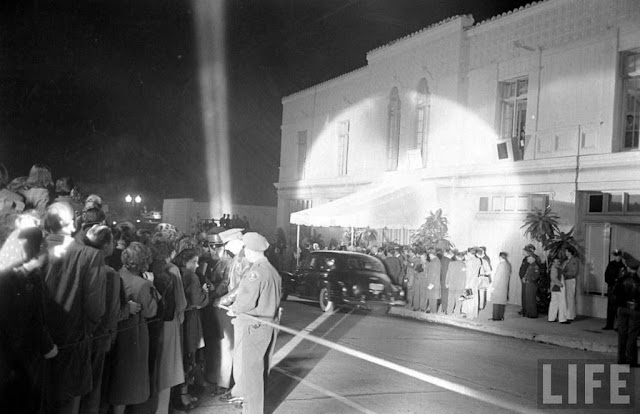 A Life magazine look at the facade. We're waiting for the stars to arrive for the 1948 Academy Awards, held in March 1949. Thanks to Noirish Los Angeles contributor Sopas EJ for finding this shot and the two other 1949 Life photos below. They were once featured on his Noirish post #6301 but have now gone missing. 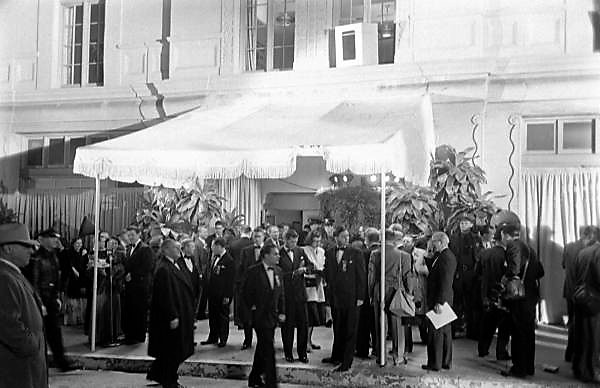 Another Oscar night view. It's a photo appearing with Marina Chetner's 2012 blog post "Oscars Over the Decades." 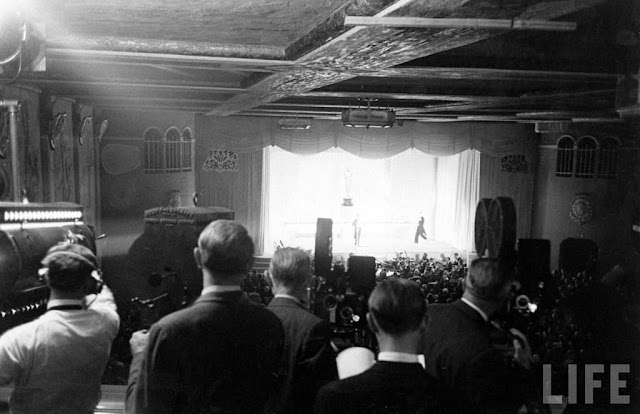 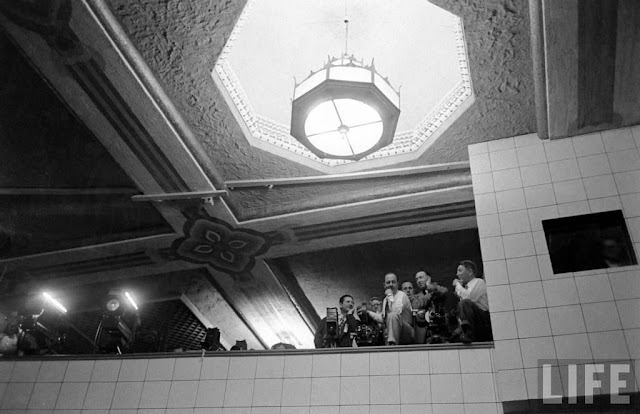 A ceiling detail with the press viewing the Academy Award proceedings in March 1949. Photo: Life 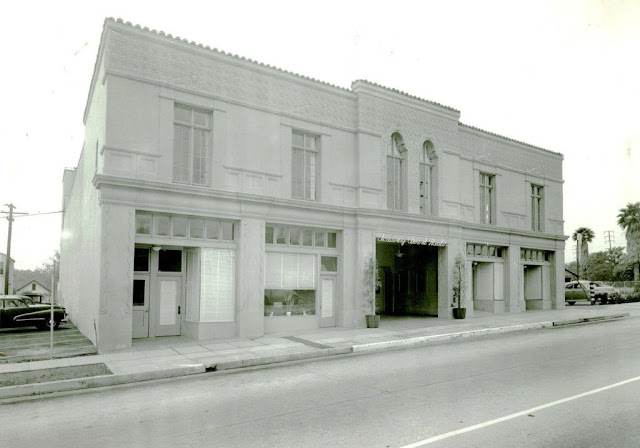 A 1951 look at the theatre that Noirish Los Angeles contributor Ethereal Reality found on eBay. It's on his Noirish post #21494. Here we can see the bit of neon across the entrance identifying it as the Academy Award Theater. 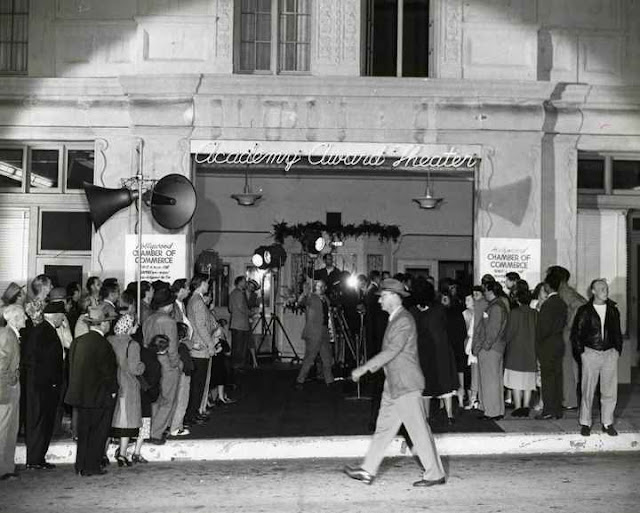 Thanks to the superb Bruce Torrence Hollywood Photograph Collection for this 1951 photo of the premiere of William Castle's "Hollywood Story" at the theatre. The film, starring Richard Conte, Julie Adams and Richard Egan, was a June release. Thanks to Noirish Los Angeles contributor Tovangar2 for spotting this one in the collection. 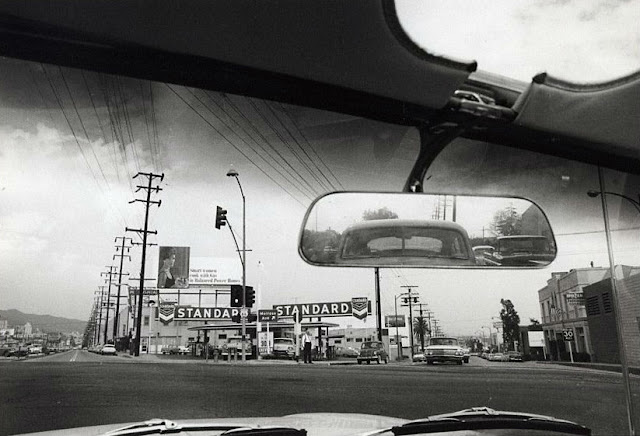 A 1961 photo by Dennis Hopper taken at Santa Monica Blvd., Doheny Dr. and Melrose Ave. He called it "Double Standard." On the left that's Santa Monica Blvd. heading east. Melrose and the Marquis Theatre are over on the right.

The photo has been everywhere. The Getty has it on their Pacific Standard Time blog. It also appeared with a 2010 L.A. Times article for a Hopper exhibition at MOCA's Geffen Contemporary. 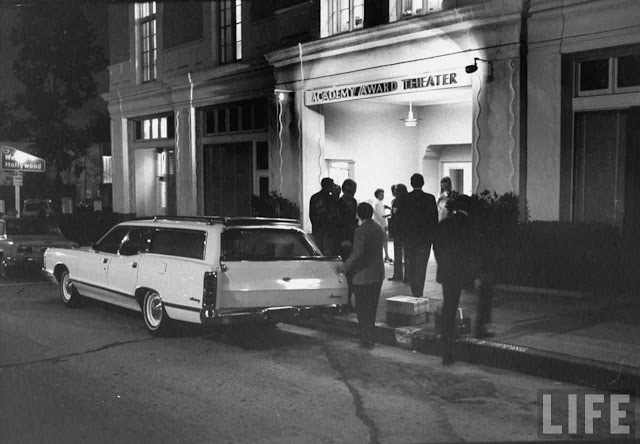 A great 1972 view of the Marquis as the Academy Award Theater taken for Life by Bill Eppinger (1938 - 2013). Price Waterhouse is delivering the ballots to the theatre. The ceremony itself would be at the Dorothy Chandler Pavilion.

Thanks to Ken McIntyre for spotting the shot in the Life collection -- he had it as a post on the Facebook page Photos of Los Angeles. The photo can be seen on the Time website as part of the Life story "Behind the Scenes at the 1972 Oscars."

More information: See the Cinema Treasures page on the Marquis. Joe Vogel has all the data.