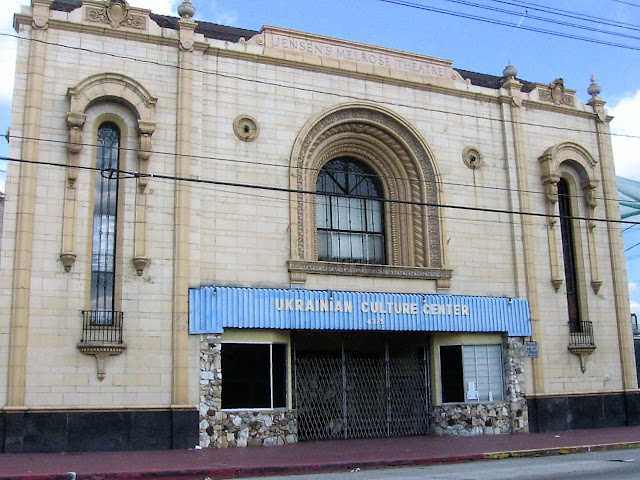 Jensen was a German immigrant brick maker who prospered as Los Angeles exploded with new construction in the teens and 20s. His firm, Henry C. Jensen & Sons, evolved into builders and building operators.

In addition to the Melrose, Jensen was involved in two nearby Echo Park ventures: Jensen's Theatorium at 1624 Sunset Blvd. (later called the Holly Theatre, now a market) and Jensen's Recreation Center at 1700 Sunset Blvd. He also operated Jensen's Raymond Theatre in Pasadena (1921) and the Palace Grand Theatre (1914) in Glendale.

Ken Roe on Cinema Tour notes that this was "a 'better class' neighbourhood theatre which had a 10 piece orchestra and a Link 2 Manual/4Rank organ which accompanied the silent films." The theatre was primarily for films and did not have a big stage.

It was still listed as Jensen's Melrose in the 1929 directory. It's unknown when Jensen's involvement ended. In 1936 it was being operated by the Chotiner circuit and advertised as Chotiner's Melrose. The Chotiner circuit was later absorbed into Fox West Coast. In the early 1950s it was leased to a church, the Fountain Avenue Baptist Church. They evidently were gone by 1952.

In 1957 and 1958 the Melrose was used as a test house for the three projector Cinemiracle process. The only film in the process, "Windjammer," had its L.A. debut at Grauman's Chinese, also operated by Fox West Coast. 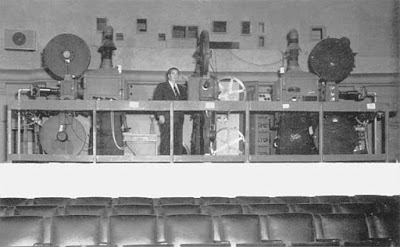 A look at the temporary Cinemiracle installation in front of the booth. We're got three modified Century projectors and a separate sound reproducer. The photo comes from the Cinemiracle section on the comprehensive and delightful American Widescreen Museum site.

The Cinemiracle installation at the Melrose featured a 24' x 63' screen. On Roland Lataille's In Cinerama page about the theatre he notes that a 3 strip print was made from "Raintree County" and demonstrated at the Melrose in July 1957.

Fox West Coast was evidently out of the building by 1959. The theatre was sold and remodeled into the Ukranian Culture Center, which opened in 1961.

In 1967, the theatre was briefly a concert venue was known as Capt'n Merriweather's Pickle Farm. Thanks to Adsausage Archives for this ad that appeared in the Los Angeles Free Press. Adsausage also has a Facebook page.

Adsausage reports that in the early 80s the building was again used as a concert venue: "Former Al's Bar booker Michael O'Reilly lined up The Plugz, Flesh Eaters, Gun Club and Phrast Freddie and Thee Precions for its opening." It's unknown how long that operation lasted.

Status: Most of the interior detailing remains, now with an opulent new paint job after lots of restoration work including plaster repairs. The main floor has been leveled. The upstairs got walled off into a separate room with a great job duplicating the feel of the main floor proscenium. 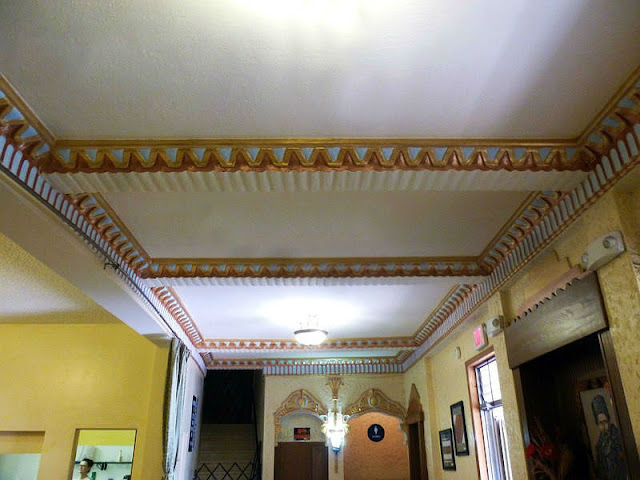 A look at the detail on the lobby ceiling. Thanks to Sandi Hemmerlein for her photos. They come from "Jensen's Melrose Theatre (Now Ukranian Cultural Center)," her lovely 2015 Avoiding Regret photo essay about a visit to the theatre. You can also track Sandi's adventures on the Avoiding Regret Facebook page. 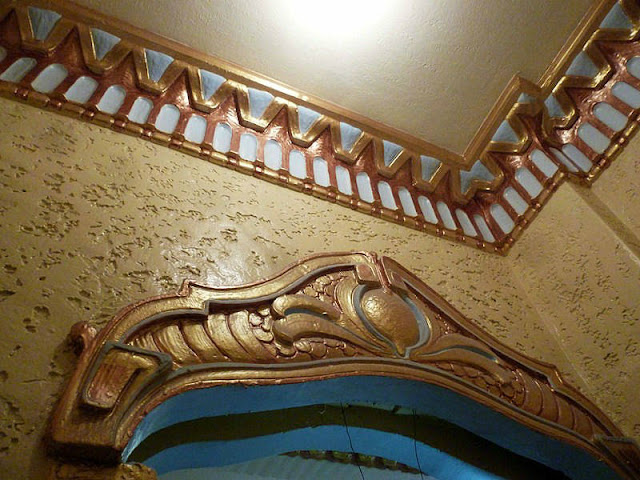 Plaster detail work in the ladies room vestibule. The doorway leads out into the lobby. Photo: Sandi Hemmerlein - Avoiding Regret - 2015 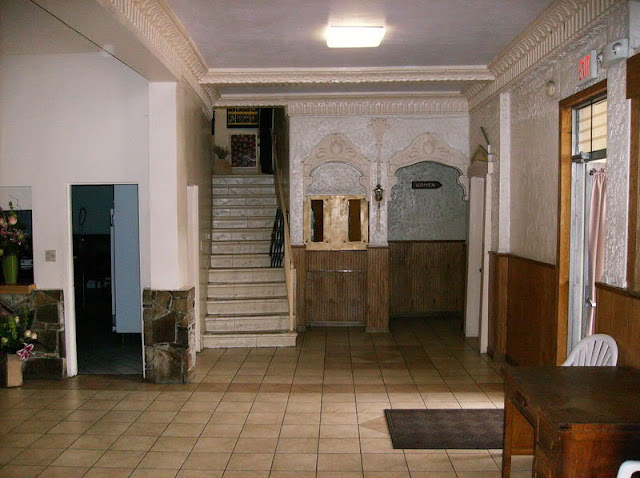 A lobby view prior to the redecorating. Thanks to Ken McIntyre for his 2008 photo. 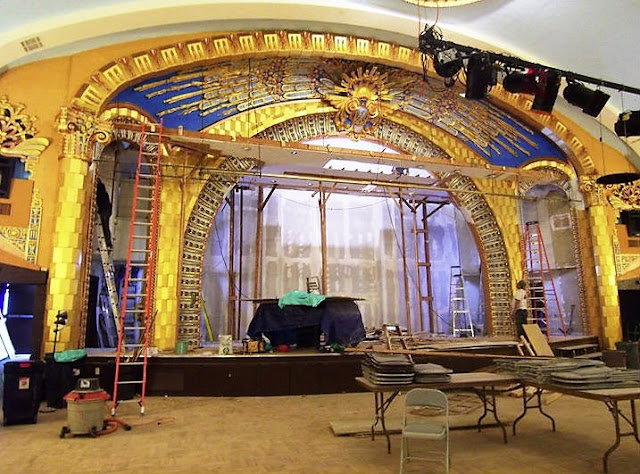 A view of the stage from the main floor during the 2011 restoration -- with a peek backstage as well. Check out the dazzling May 2011 photo album on the Ukranian Culture Center Facebook page for 43 views of the building during and after the redecorating project. 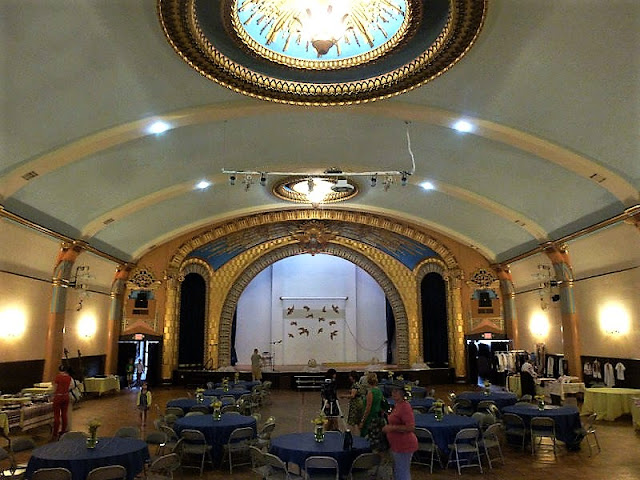 A stage view from the rear of the main floor. The upstairs has been walled off as a separate meeting space. Photo: Sandi Hemmerlein - Avoiding Regret - 2015 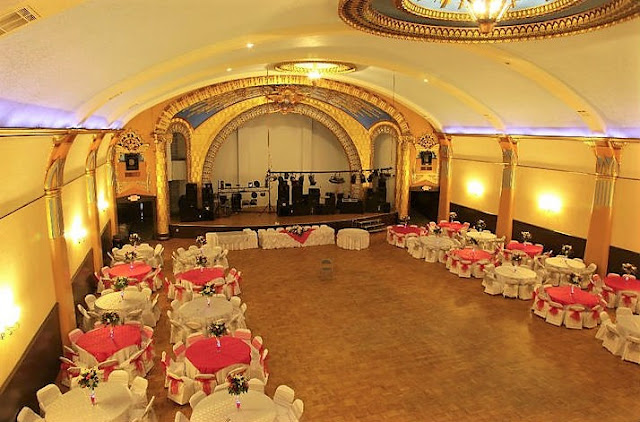 A view of the hall from upstairs. Photo: Ukranian Culture Center Facebook page - 2011 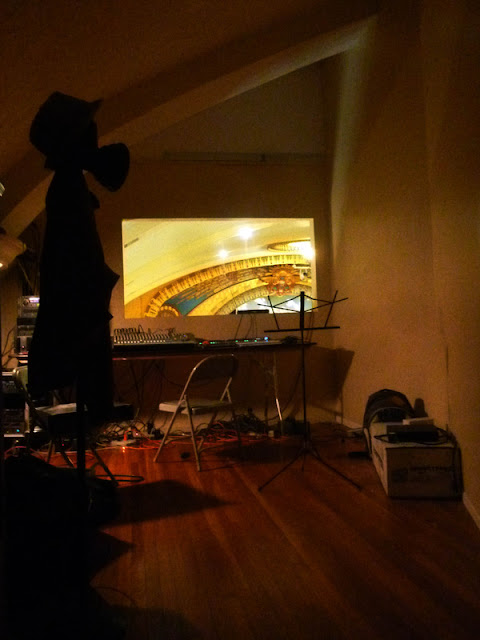 Backing up a bit from the position the photo above was taken from we get a look at the upstairs control booth.  Photo: Sandi Hemmerlein - 2015 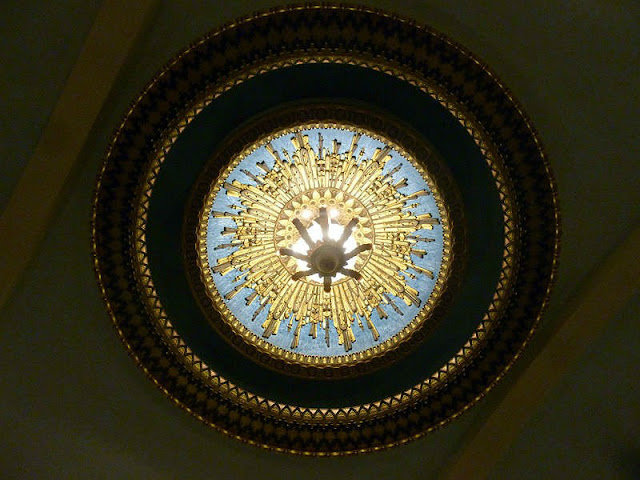 The medallion and chandelier in the middle of the ceiling. Photo: Sandi Hemmerlein - Avoiding Regret - 2015 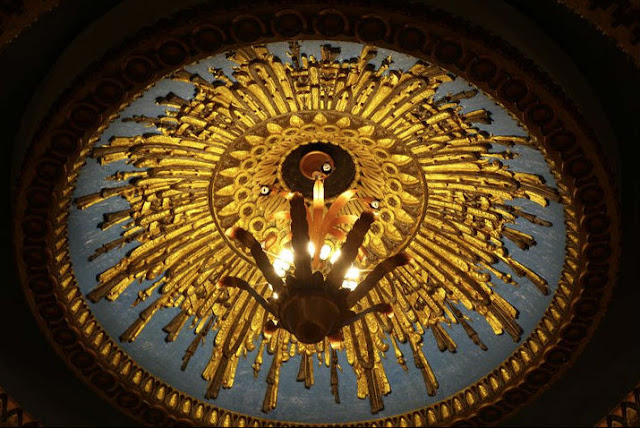 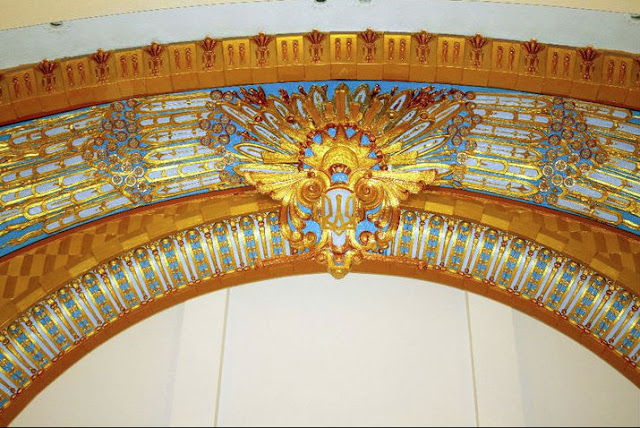 A detail of the proscenium after the 2011 re-gilding and repainting. Photo: Ukranian Culture Center Facebook page 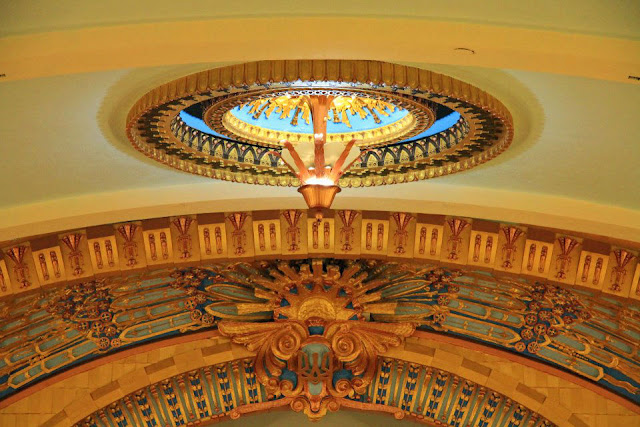 A nice detail of the top of the proscenium posted on the Vintage Los Angeles Facebook page by Linda Stewart. 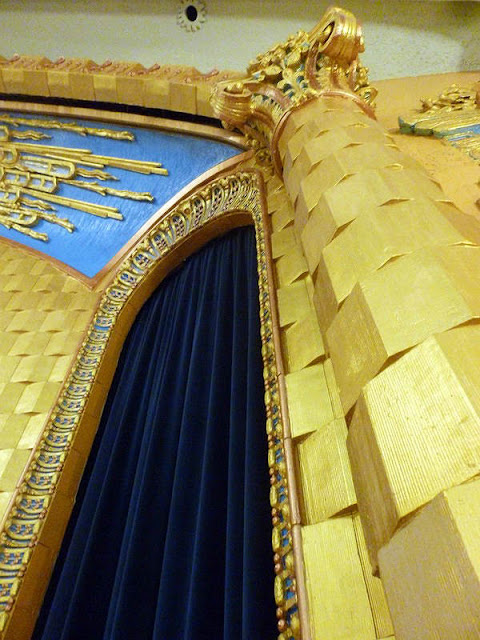 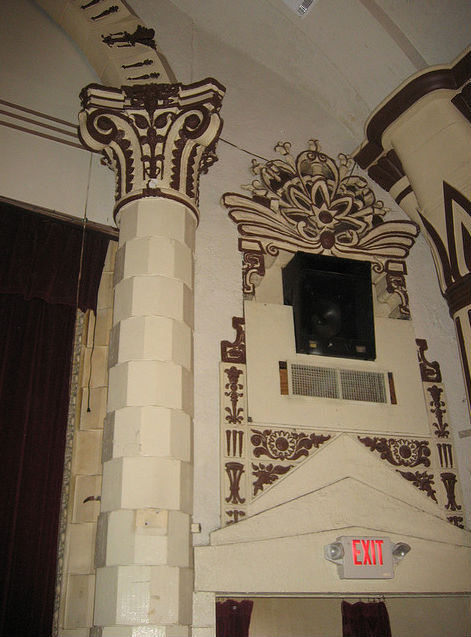 A 2006 photo from Hey Skinny on Flickr showing the look before the restoration work. Ken Roe has a similar view on the Cinema Tour page about the theatre. Skinny notes: "It's a weird mishmash in here of Egyptianate and Greco-Roman, all repainted heavily with only two colors." 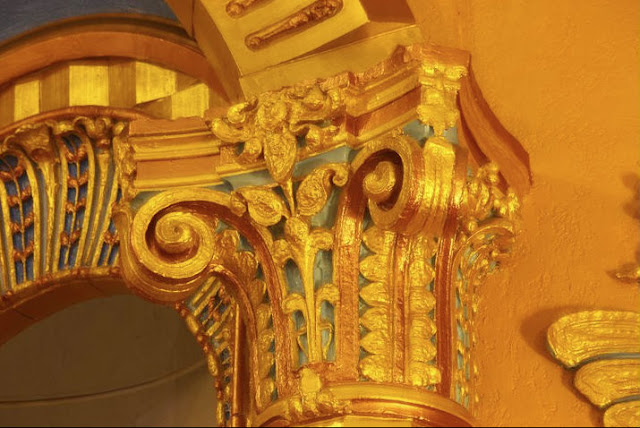 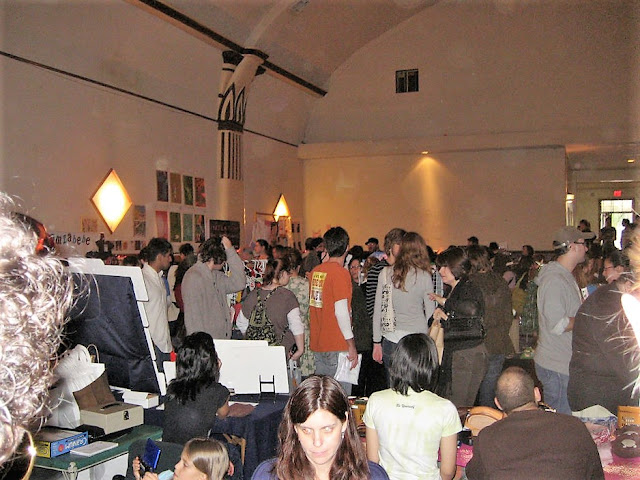 A look toward the rear of the house in 2006. Note that the upstairs has been walled off to form a separate room. Photo: Hey Skinny on Flickr 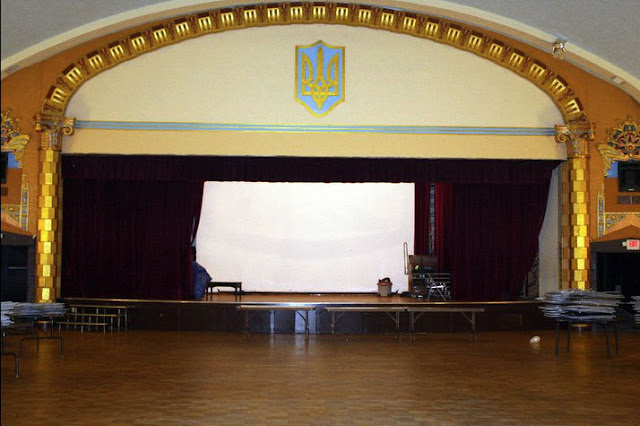 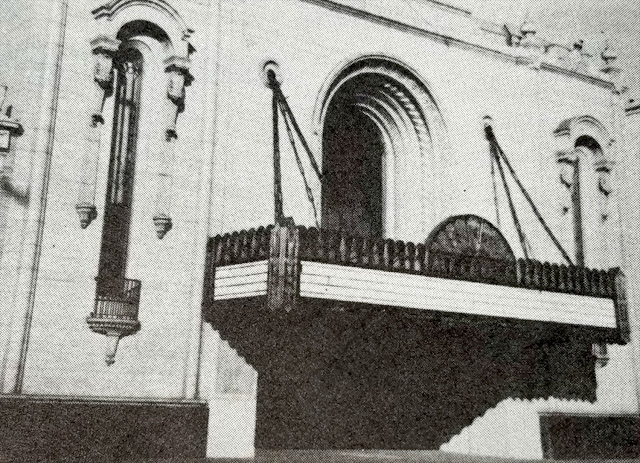 Thanks to Matt Spero for this undated photo, the only one to surface showing the building with a marquee. He reports: "I had stopped by the Ukrainian Culture Center several years ago and asked if they had any pictures of the building when it had a marquee. They gave me a soft cover book that had this one exterior picture in it with the marquee in place." 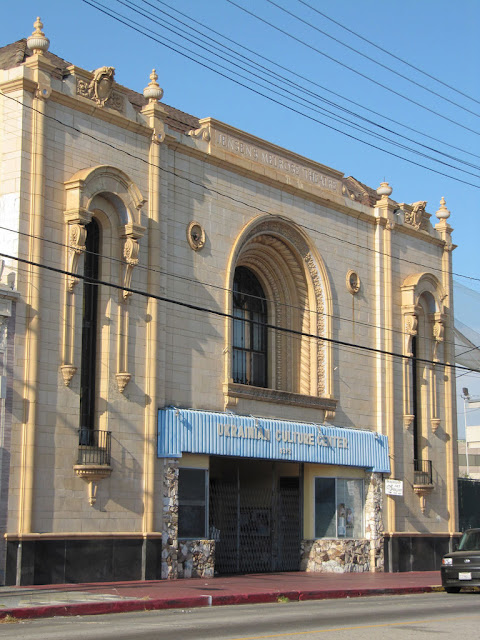 A 2009 view of the Melrose from Waltarrrrr on Flickr. 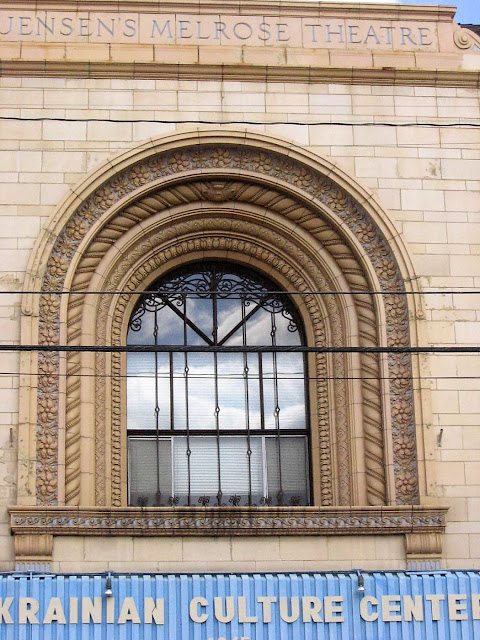 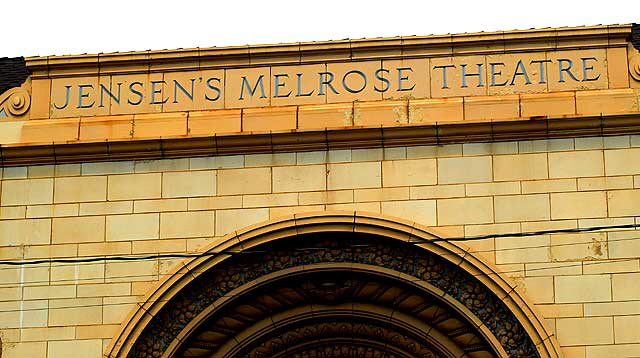 The lettering at the top of the facade. The photo by Just Above Sunset Photography is one of a set of dazzling detail views of the facade that appear on their page "Straight From 1924." 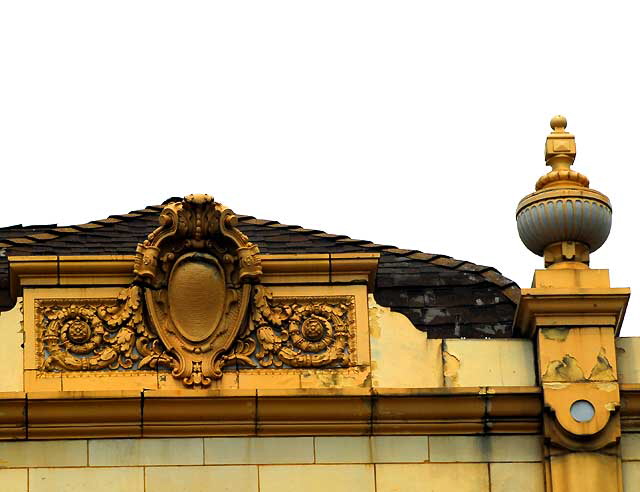 Ornament at the top of the facade.  It's a photo by Just Above Sunset Photography on their page "Straight From 1924." 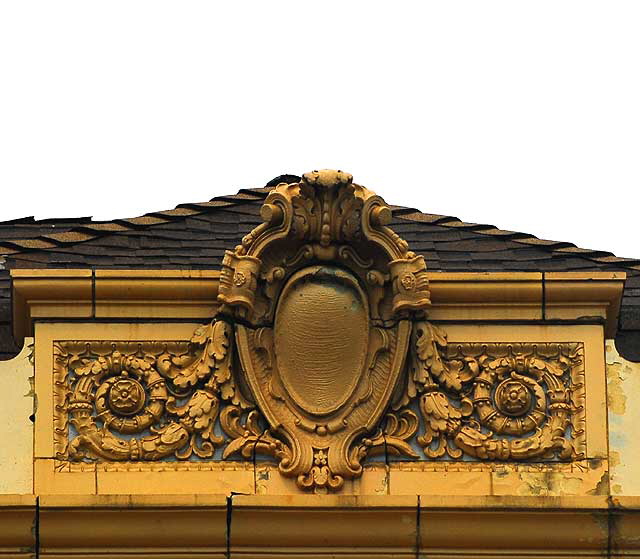 Another terracotta detail. It's a photo by Just Above Sunset Photography on their page "Straight From 1924." 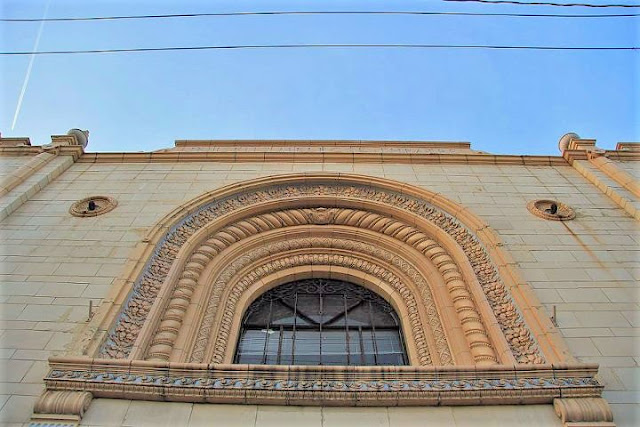 The arch from below. Photo: Linda Stewart - Vintage Los Angeles - 2010 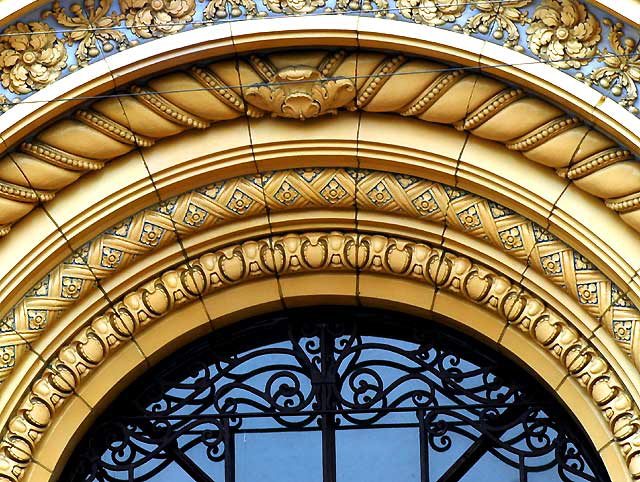 The top of the arch. It's a photo by Just Above Sunset Photography on their page "Straight From 1924." 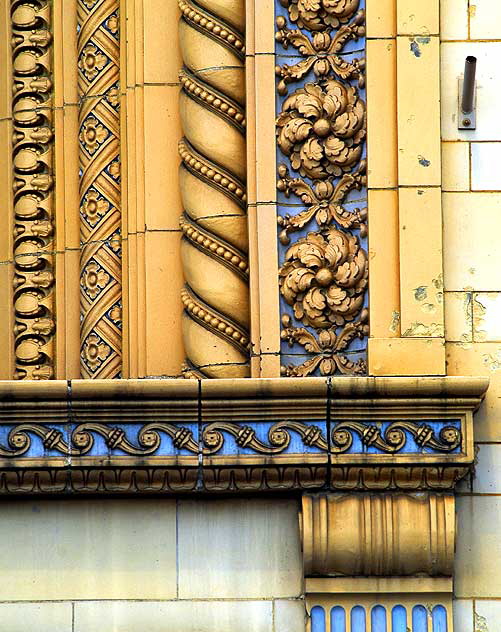 Terracotta on the side of the arch. It's a photo by Just Above Sunset Photography on their page "Straight From 1924." 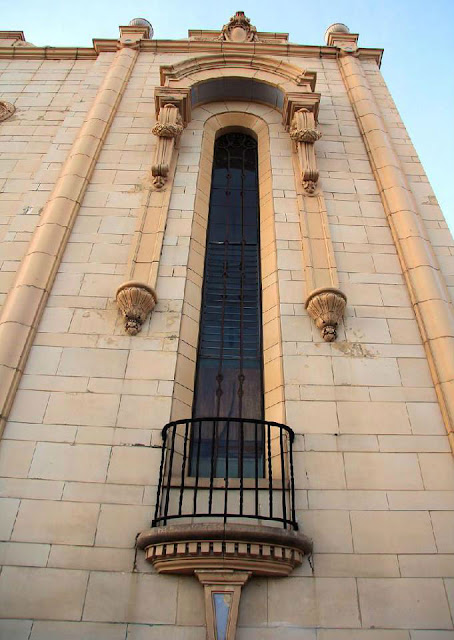 A window detail. It's a 2012 photo by Linda Stewart that appeared on Vintage Los Angeles. Also see her facade view looking west. Thanks, Linda! 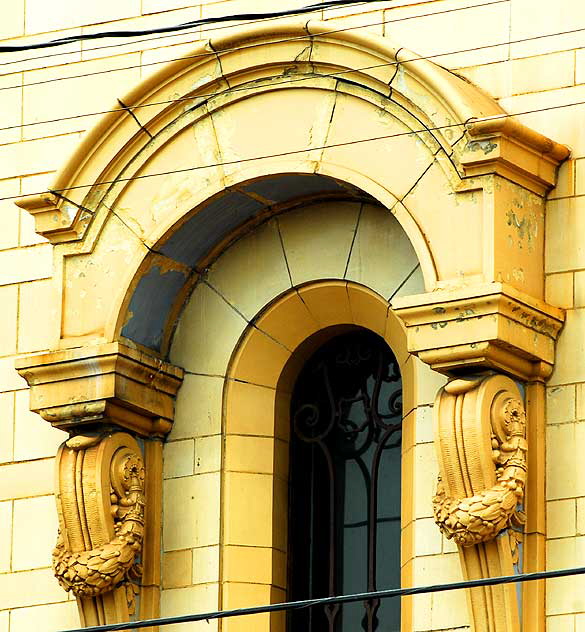 The top of one of the side windows. It's a photo by Just Above Sunset Photography on their page "Straight From 1924." 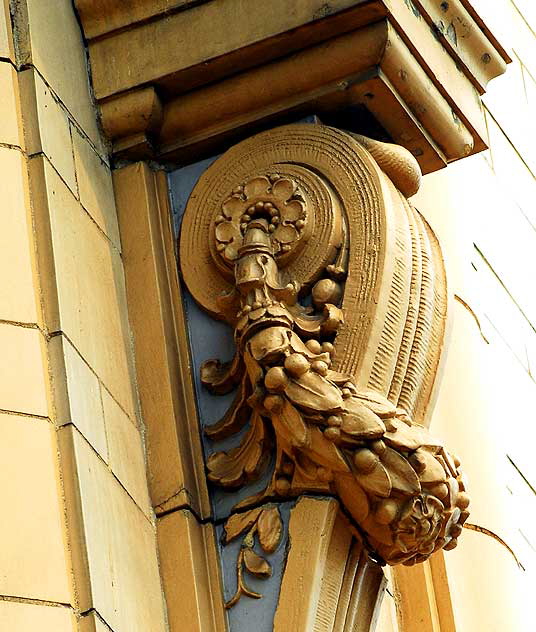 A detail of a bracket on one of the facade side windows. It's a photo by Just Above Sunset Photography on their page "Straight From 1924."

The view east on Melrose toward the theatre. Photo: Google Maps - 2011

More information: See the Cinema Treasures page on the Melrose. The Cinema Tour has a history of the theatre contributed by Ken Roe along with some of Ken's photos.

Martin of You-Are-Here fame has a nice facade view of the theatre and gives the building a date of 1923.