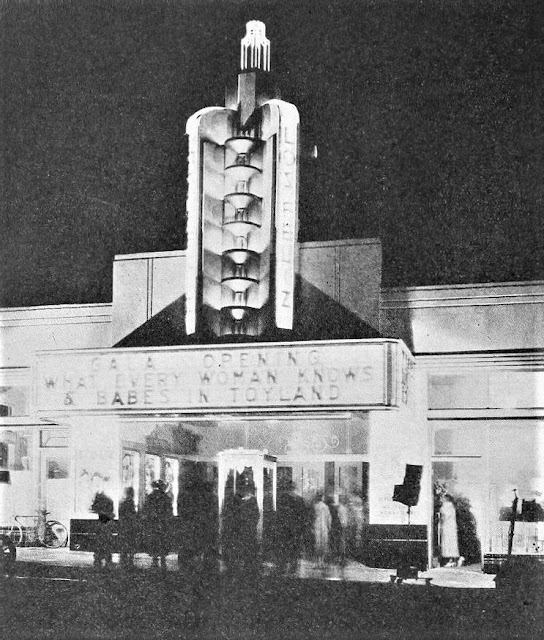 Opened: February 14, 1935 with "What Every Woman Knows" and "Babes in Toyland." The theatre is on the east side of the street three blocks north of Hollywood Blvd. The opening night photo appeared in the March 9, 1935 issue of Motion Picture Herald with an article titled "New Theatres From Old: The Front." Note the original array of cascading lights. The tower was later modified.

Architect: Clifford A. Balch. He was credited in the caption of the opening night photo when it appeared in the June 29, 1935 issue of Boxoffice. Thanks to ace Cinema Treasures researcher Joe Vogel for spotting it there. The caption in Boxoffice:

"The Los Feliz Theatre front is an excellent example of how color and motion can be combined to present an effective advertising appeal. The tower, representing a fountain in appearance, is given a mobile effect by the use of amber and green lamps on alternate circuits located behind the silhouette letters and behind the conical sections. The attraction sign, made up of silhouette letters on a smoothly luminous flashed-opal background, is modern in appearance. Designed and installed by Luminous Structures, Incorporated, Los Angeles, Calif. C. A. Balch, architect." 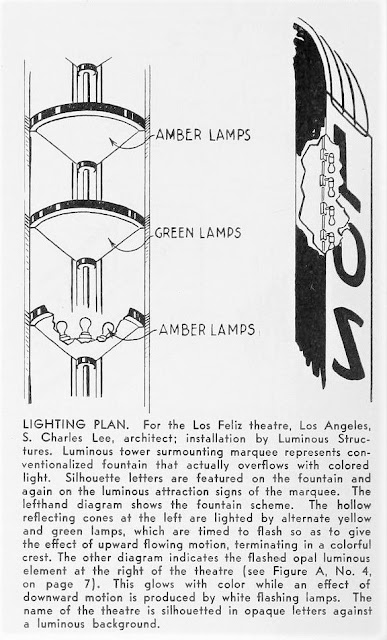 The 1935 Motion Picture Herald article also included this diagram of the "fountain that actually overflows with colored light." Note that they have credited S. Charles Lee as the architect, evidently an editing mistake. The article also featured a sketch of Lee's Studio/Holly Theatre in Hollywood. The sketch and specifications for the project were credited to General Electric Laboratories. Thanks to Bob Foreman for finding the article. See his Vintage Theatre Catalogs site for a vast trove of tech and theatre history information that he has collected.

Variety noted the theatre's opening date in their March 20, 1935 issue. They also mentioned that the original lessee was Herman Lewis. Thanks to Bob Foreman for finding the item.

The venue was a second run family oriented single screen theatre for decades. Later it was an art house running for years under Laemmle management. At that time it was one of the premiere foreign film venues in L.A. The theatre was triplexed in the early 90s after the Laemmle circuit lost their lease.

Status: The theatre continues to do well as a triplex offering first run releases. It's operated by Vintage Cinemas, who also operate the Vista Theatre.

The Los Feliz in the Movies: 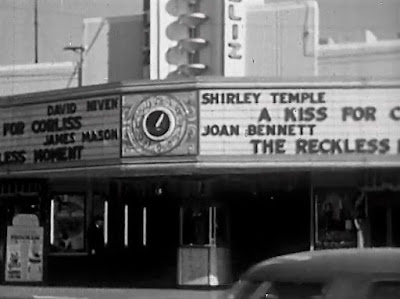 The exterior of the theatre is seen in the ten minute public service film "The Dangerous Stranger" (Sidney Davis Productions, 1950). Thanks to Cinema Treasures contributor Bobster1985 for the screenshot. See several more from him on the Cinema Treasures page. Or see the Theatres in Movies post. Note the partial view of the original tower configuration.

We get this fine look at the Los Feliz in "The Slams" (MGM, 1973).  Jim Brown, Judy Pace and Roland Bob Harris star in this crime drama about a quest for money stashed before Brown was sent to prison. Jonathan Kaplan directed. The film also spends some time at the Lincoln Heights jail, in the LaCienega oil fields and at Pacific Ocean Park. Thanks to Eric Schaeffer for spotting the theatre in the film and getting the screenshot.

Dimitri Martin and Gillian Jacobs, a prospective girlfriend, wander in front of the Los Feliz Theatre, 1822 N. Vermont Ave., in "Dean" (CBS Films, 2017). Martin also wrote, directed and illustrated the film, a tale about a misfit cartoonist and his curious adventures with various friends and  lovers. The film also stars Kevin Kline as the dad and Mary Steenburgen as a real estate agent he falls for. 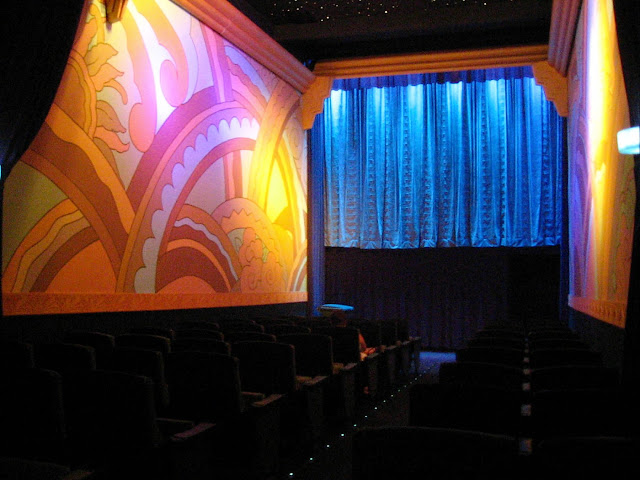 One of the smaller rear auditoria. Photo: Bill Counter- 2010 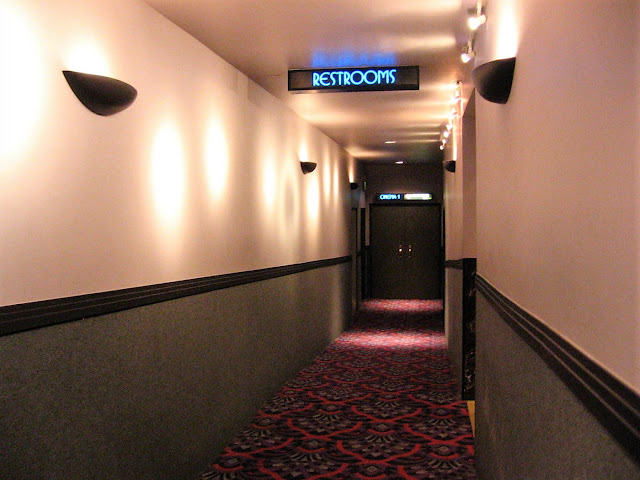 The hall to the right of the two rear auditoria that leads to the larger house in front. Photo: Bill Counter - 2010 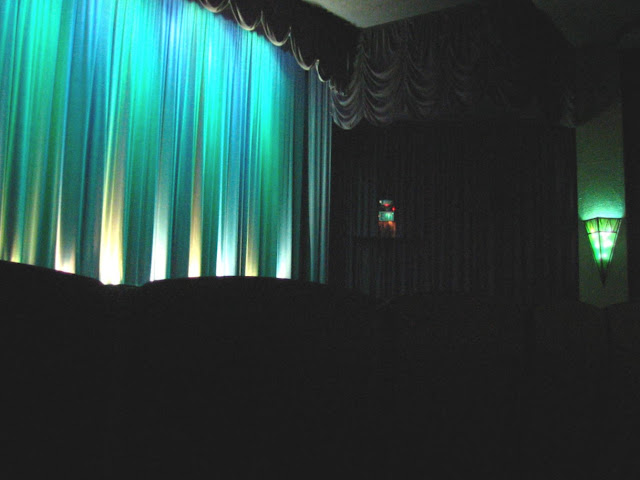 The big auditorium -- a shallow theatre in the front half of the original space. Photo: Bill Counter - 2010 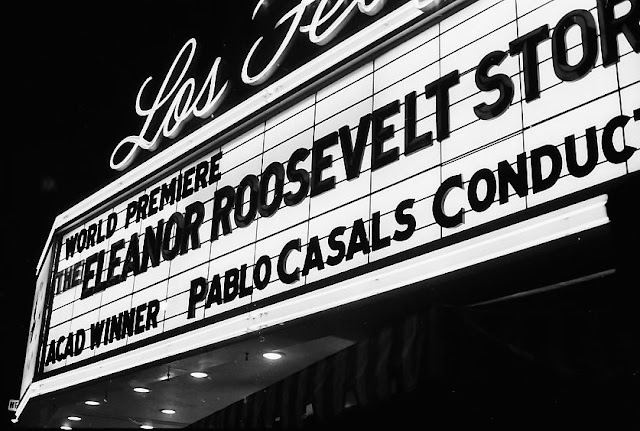 Thanks to Sean Ault for finding this view of the marquee taken during the run of "The Eleanor Roosevelt Story,"  a 1965 release. 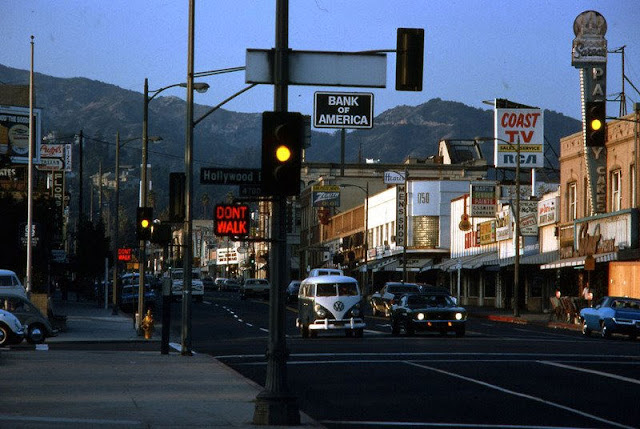 A great 70s telephoto view looking north on Vermont from Hollywood Blvd. It was added by Don Sherman to the Photos of Los Angeles page on Facebook. The Los Feliz marquee is right under the "don't walk" sign. The corner on the left is the former location of the Studio Theatre. 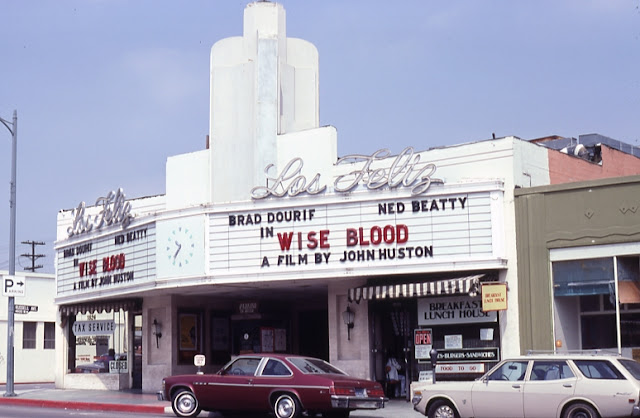 Thanks to American Classic Images for this 1980 photo. 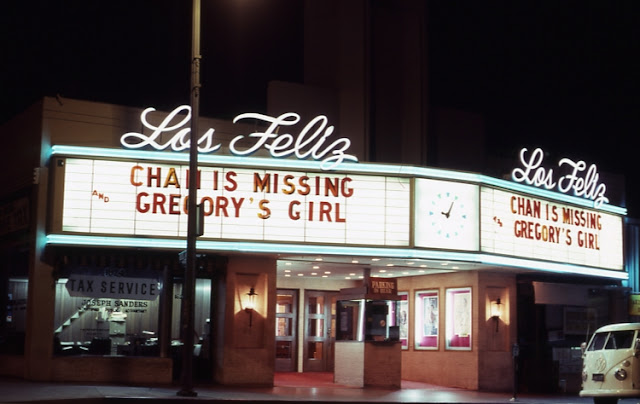 A January 1983 look at the neon from American Classic Images. The site also has a November 1982 daytime view. 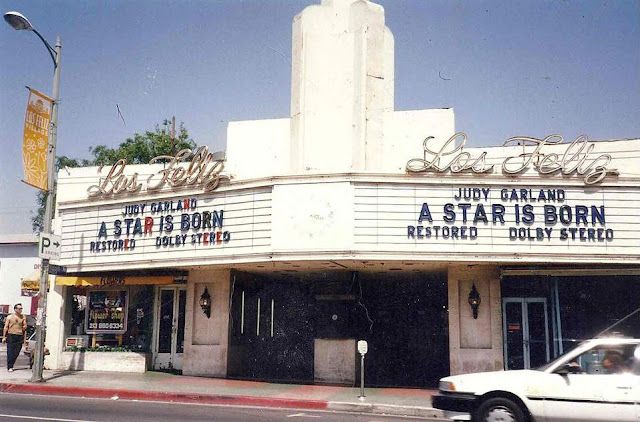 Thanks to Wayne Lawless for this 80s view of the theatre in its single-screen days. He added it as a comment to a post about the theatre on the LAHTF Facebook page. 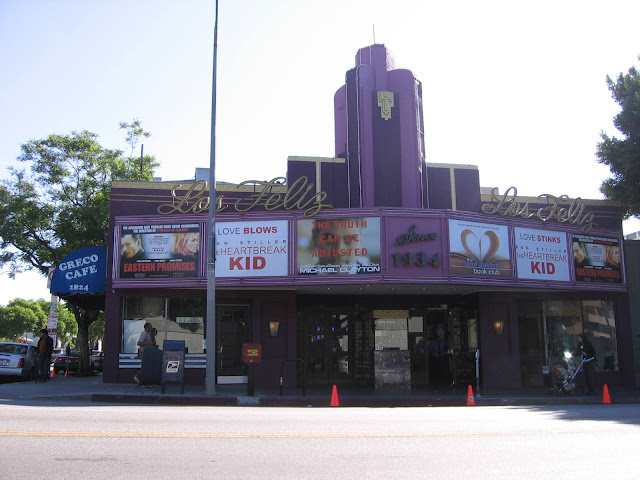 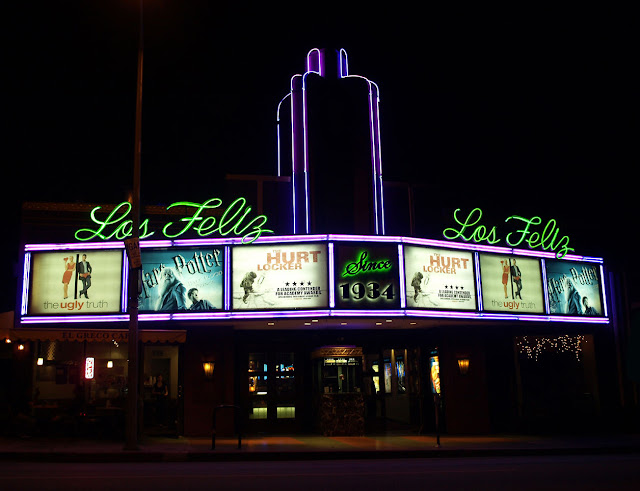 A night view of the Los Feliz Theatre neon. Thanks to Mark Peacock for his 2009 photo. It's from his Vintage Theatres set on Flickr.  Also visit his blog: On the Road With Mark Peacock. 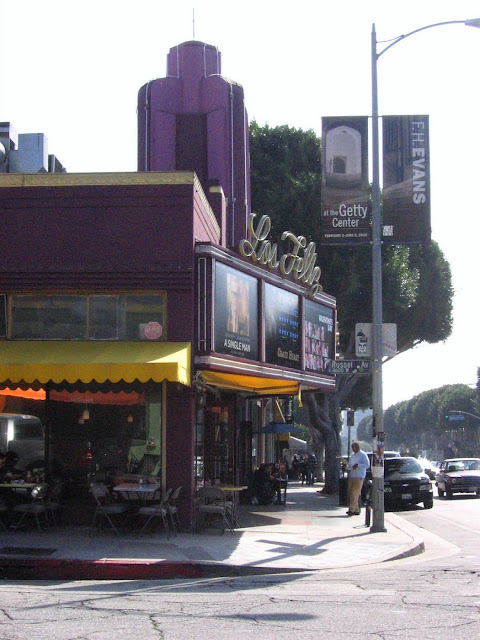 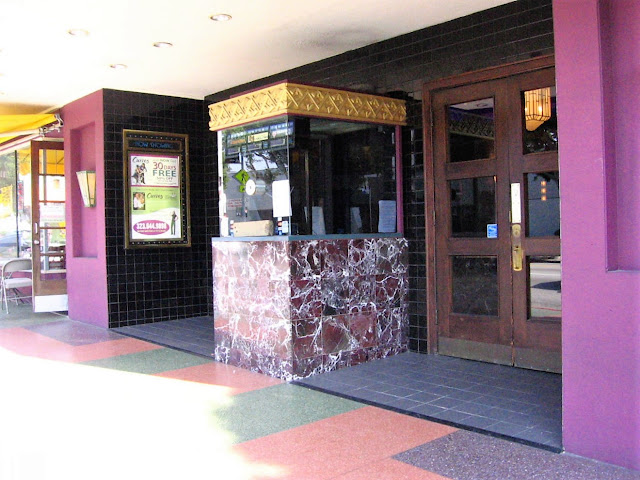 The entrance to the theatre. Photo: Bill Counter - 2010 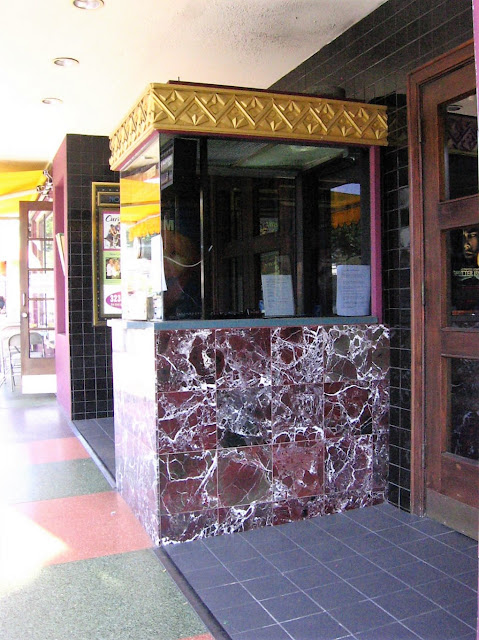 A closer view of the Boxoffice. Photo: Bill Counter - 2010 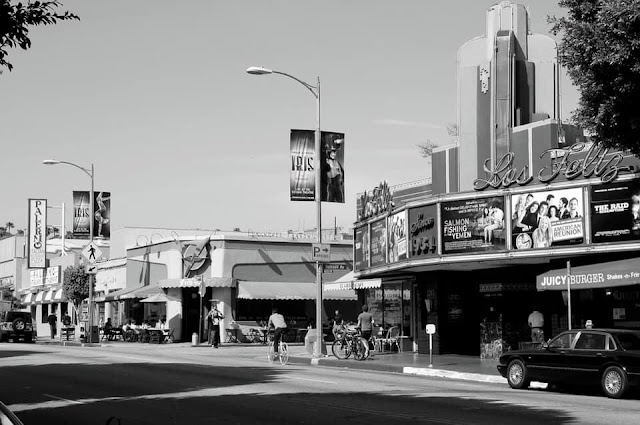 Thanks to Ken McIntyre for finding this 2012 shot for a post on the Photos of Los Angeles Facebook page. 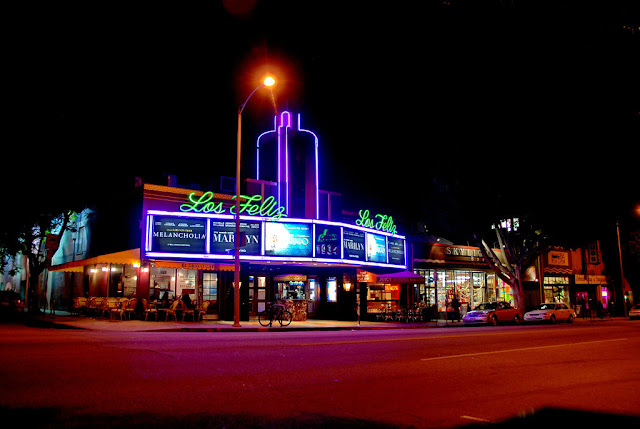 "10 Surefire Signs You're Not From L.A.," a fine November 2013 L.A. Weekly article by Dennis Romero, included this 2011 look at the front of the Los Feliz from Michael Locke on Flickr. It's on page three of the article. 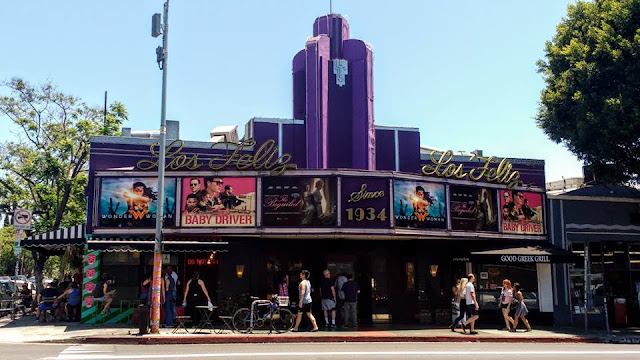 Thanks to Shawn Dudley for his July 2017 photo, added as a comment on the Los Angeles Theatres Facebook page. Despite what the marquee says, the theatre didn't open until 1935. 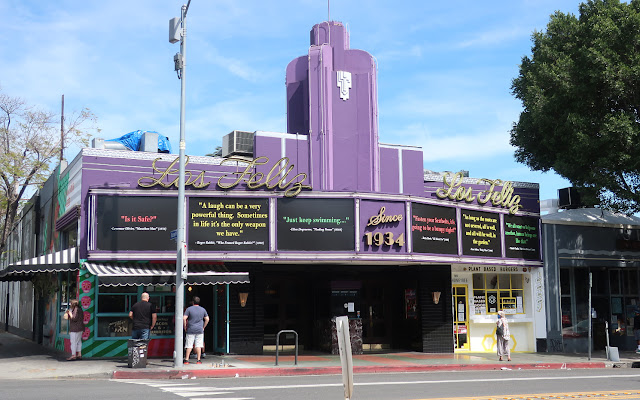 "Is it safe?"  "Fasten your seatbelts, it's going to be a bumpy night."  "Just keep swimming..." Unlike some theatres (think Cinerama Dome) that just left signage up from whatever they happened to be playing when the virus lockdown was ordered, Vintage Cinemas had panels made with more interesting copy. Thanks to Eitan Alexander for noting the copy on the marquee. Photo: Bill Counter - April 2020

More Information: The Cinema Treasures page on the Los Feliz has lots of historical data on the theatre as well as links to more exterior photos.

Cinema Tour has a nice set of 2008 views (including interior shots) by Mark Campbell.