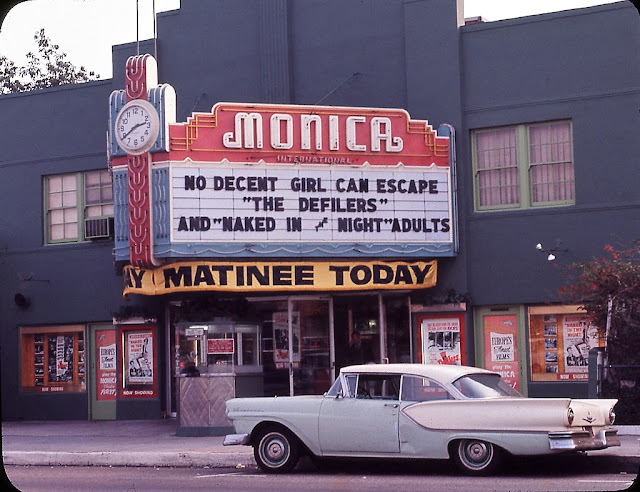 Opened: 1940 as the Monica Theatre. It's on the south side of the street four blocks east of Fairfax. Thanks to Eric Lynxwiler for sharing this c.1965 photo from his collection. It's on Flickr. Note "International" added in neon under the theatre's name.


Seating: 638 originally, with no balcony.

The initial film was "The Old Maid," starring Bette Davis. This big ad appeared opening day, March 15, 1940. Thanks to Mike Rivest for locating it. Visit his site: Movie-Theatre.org

Initially it was a typical neighborhood house and then shifted toward a good career running foreign films. Michael Kilgore found this item in the January 5, 1952 issue of Motion Picture Herald:

"Leo Hershon and Saul Fruchtman have sold the Monica theatre to Bob Schwartz and Jack Hendricks."

Beginning in the late 50s, the theatre was calling itself the Monica International.

A January 1958 ad. Thanks to Ken McIntyre for finding it. 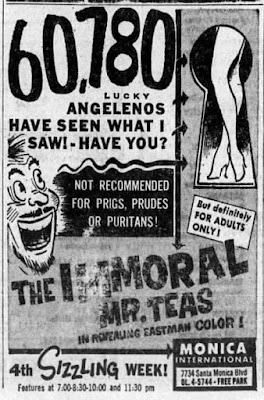 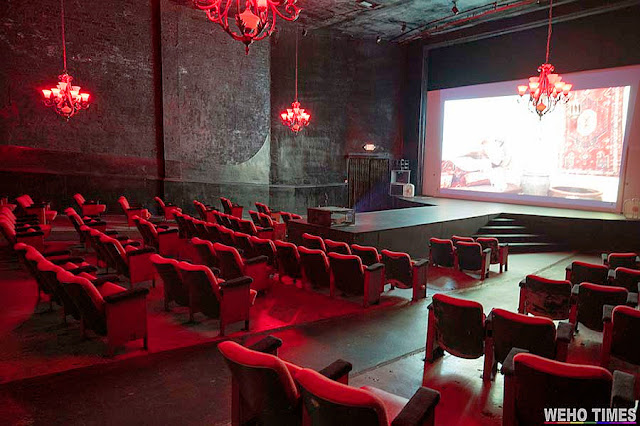 The main auditorium. It's a WeHo Times photo by Paulo Murillo, one of many views with his article  "X Rated Studs at the Pussycat Theatre in West Hollywood Is Closing October 29." 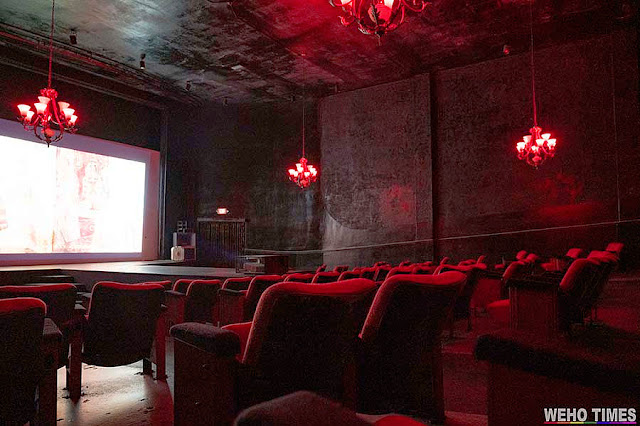 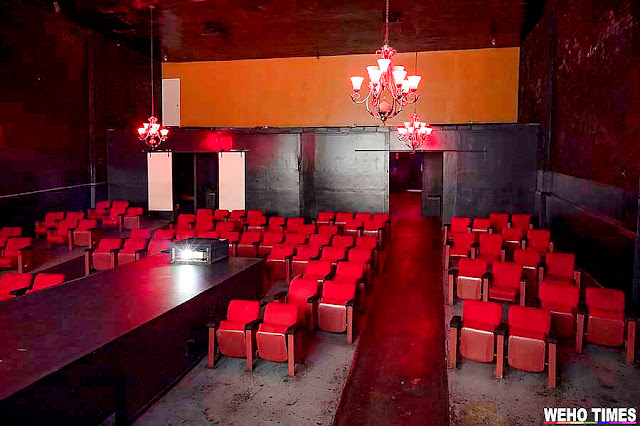 The rear of the auditorium. Photo: Paulo Murillo - Weho Times - October 2022. Thanks, Paulo! 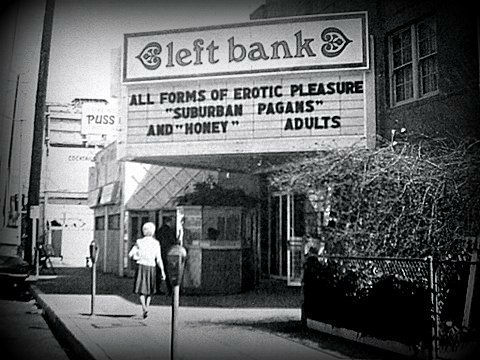 1969 - A view of the theatre as the Left Bank. It appears on the Cinema Treasures page for the theatre. Thanks to the site's contributor Mr. Comfortably Cool for the post. 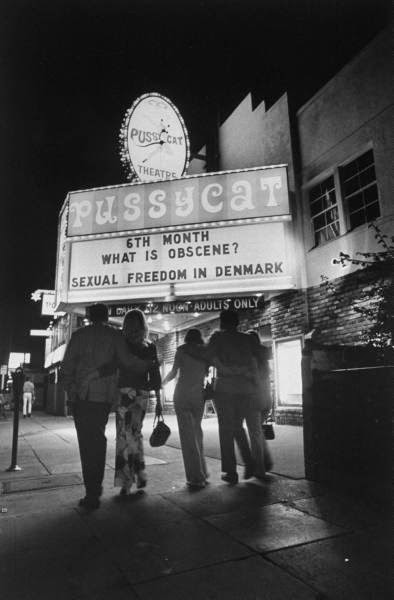 1970 - Here the theatre has been renamed the Pussycat and was showing "Sexual Freedom in Denmark." It's a photo from Chapter 3 of Jay Allen Sanford's history of the Pussycat chain, a book length epic originally appearing in the San Diego Reader. It's on Blogspot: "Pussycat Theaters: The Inside Story Chapter 1" and "Pussycat Theaters: The Inside Story Chapters 2-15." 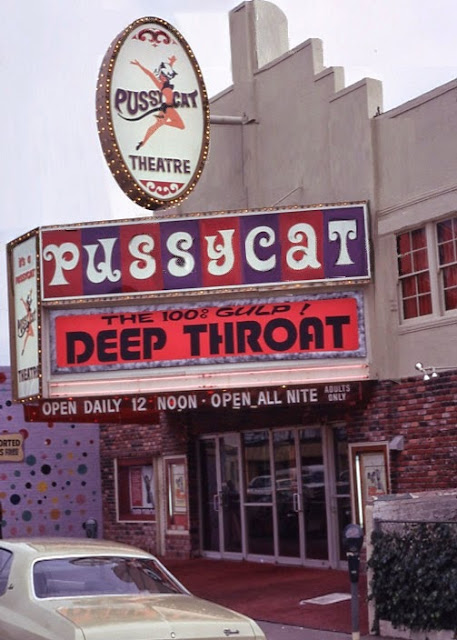 1973 - A look at the Monica in March, during the run of the big hit "Deep Throat," which opened November 17, 1972. Thanks to Jay Allen Sanford for the photo, one appearing with his history of the chain. It also made an appearance on the now-vanished American Classic Images website. 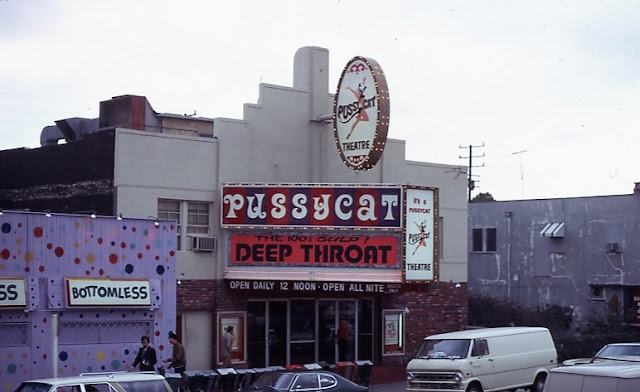 1973 - Thanks to the American Classic Images website for this wider view, also taken in March. 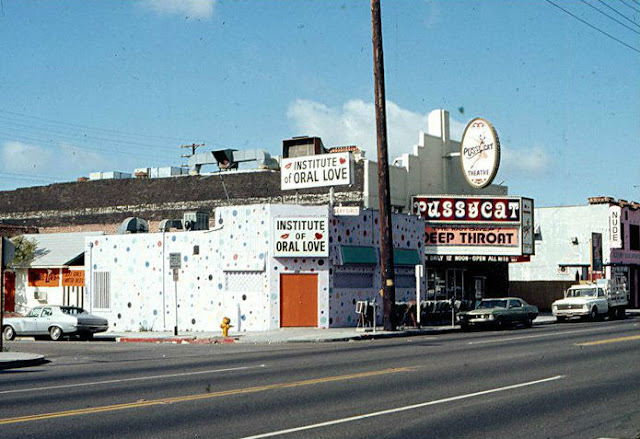 1974 - A photo taken in April by Jim Stephenson. It was a post on the Facebook page Vintage Los Angeles. 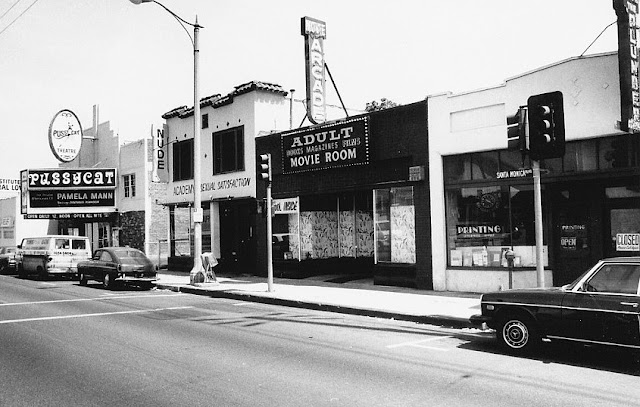 1975 - The amazing Bruce Torrence Historic Hollywood Photographs collection includes this view looking east toward the theatre. It's their #MP-042. 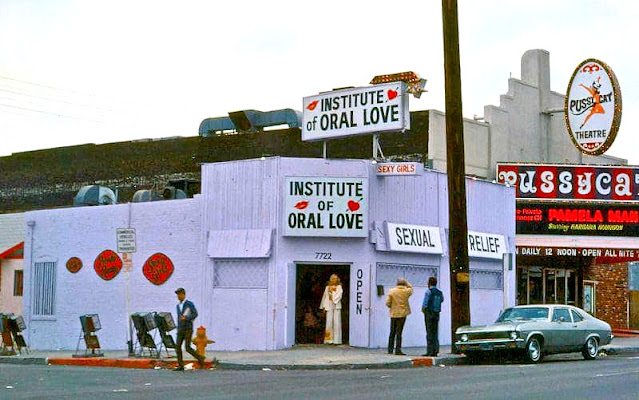 1975 - Thanks to Ken McIntyre for locating this photo for a post on the Photos of Los Angeles Facebook page. 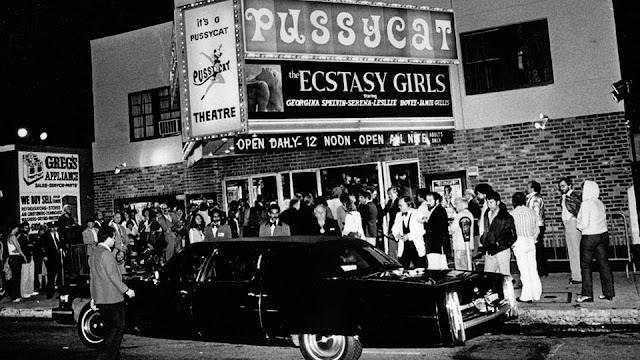 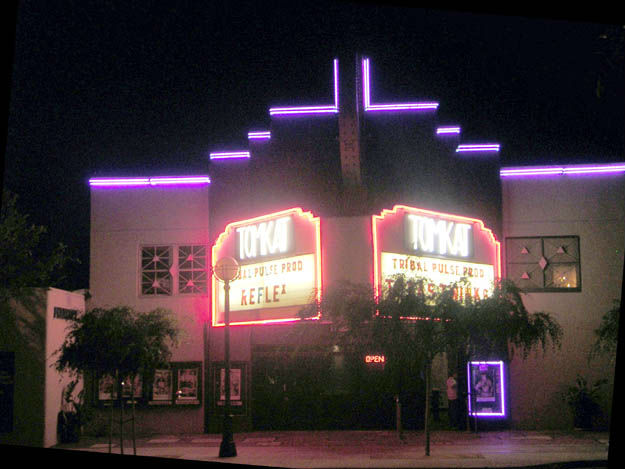 2004 - The Cinema Tour page about the Studs Theatre includes this view by Ken Roe taken when the theatre was the Tomkat. Thanks, Ken! 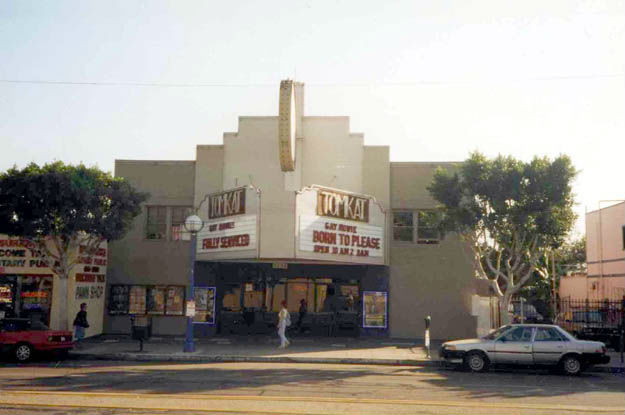 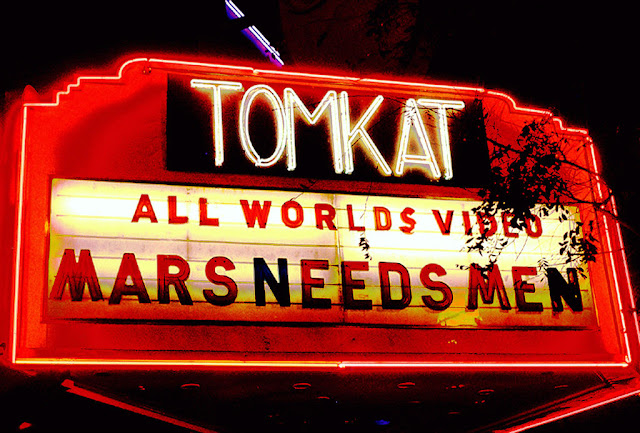 2010 - Thanks to Bud Care for sharing this marquee detail on Flickr. And also to Ken McIntyre for spotting it for a post on the Facebook page Photos of Los Angeles.

2011 - The Monica Theatre as Studs at the Pussycat. Photo: Google Maps 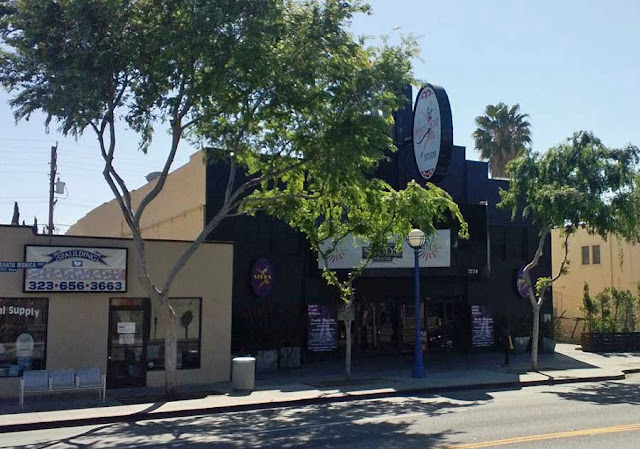 c.2013 - Thanks to Christopher Crouch for this photo of the theatre as the Studs. It's with "A Shrine To The Other Hollywood," his Cinelog article about the stars' hand and footprints in the concrete outside the theatre. 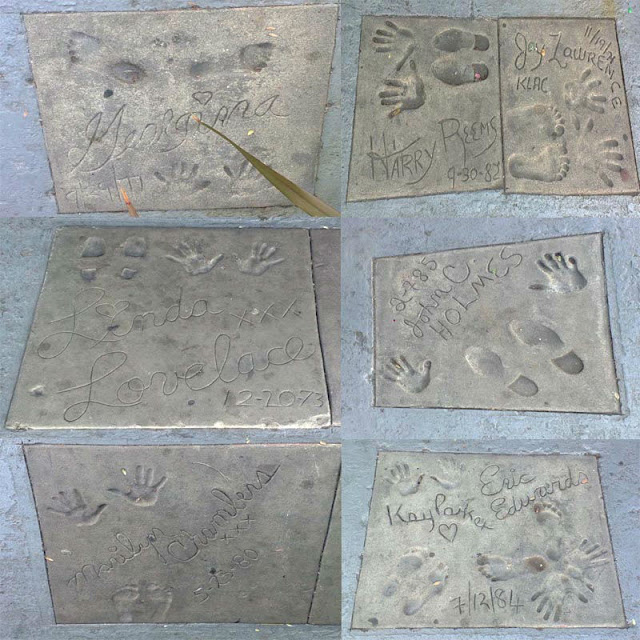 c.2013 - In a bid for immortality, the stars' hand and footprints are preserved in front of the Monica. Instead of Gable and Monroe, the stars here are from the theatre's Pussycat days and include performers such as Linda Lovelace and John Holmes. Thanks to Christopher Crouch for the photo. He says tkis stop won't be included on any Starline tour you take. 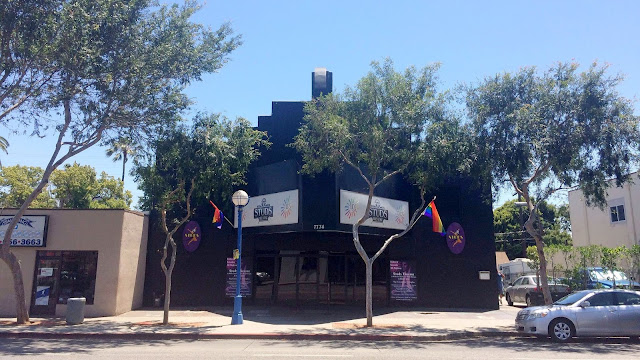 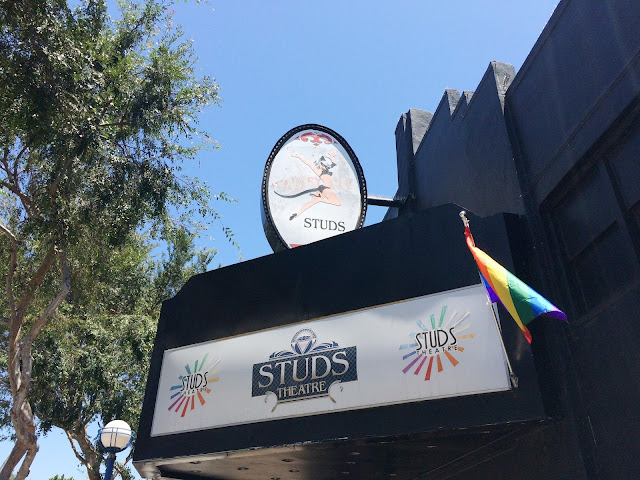 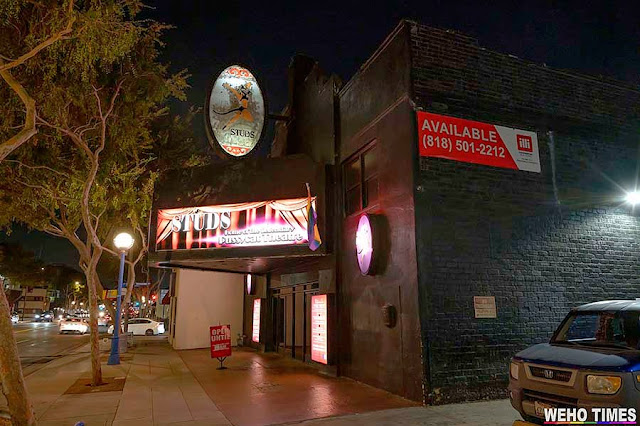 2022 - It's a WeHo Times photo by Paulo Murillo, one of many views with his article  "X Rated Studs at the Pussycat Theatre in West Hollywood Is Closing October 29." 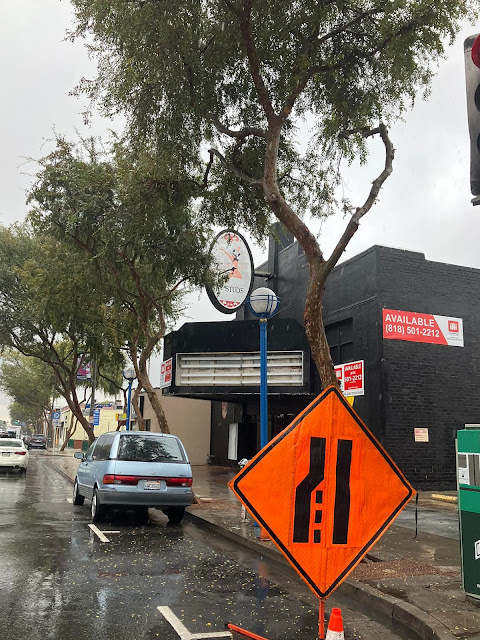 2022 - Sitting vacant on a rainy day in early November. Thanks to F Hudson Miller for getting the shot and sharing it on the Los Angeles Historic Theatre Foundation Facebook page.
The Monica in the movies: 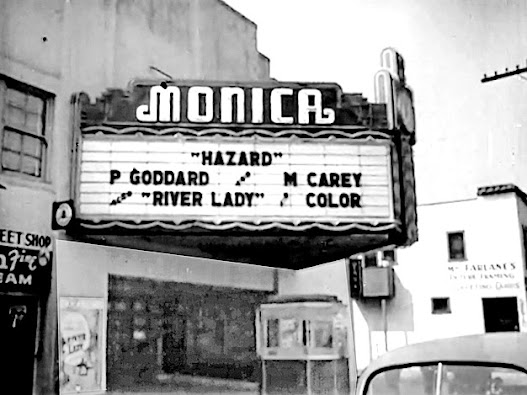 It's one of many Los Angeles area theatres (including the Campus and the Esquire) that we get a quick look at in the nine minute short "Let's Go To The Movies," available on Internet Archive. It was produced by RKO in 1948 for the Academy of Motion Picture Arts and Sciences. See the Historic L.A. Theatres in Movies post for more theatre shots from the film. 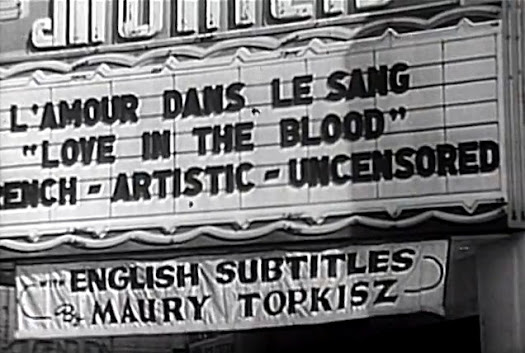 About 20 minutes into "Three Husbands" (United Artists, 1950), ostensibly set in San Francisco, we get this shot. The film, directed by Irving Reis, involves a recently dead playboy who is granted one wish in heaven. That he'll be able to see the faces of three friends when they each read a letter he's sent saying he had a fling with their wives. Eve Arden, Ruth Warrick and Vanessa Brown are the wives. The Monica is where two of the couples attend a French film. Not together. And several of the participants try to avoid being seen by the others. Thanks to Jack Tillmany for spotting the shot in the film. See the Historic L.A. Theatres in Movies post for two views of the studio setup they use for the interior shots.

The Monica is seen in "Hot Rod Gang," (American International, 1958). Thanks to Bret Mannon for spotting it. He notes: "It can be seen as the racers zip up and down Santa Monica Blvd. The marquee is only plainly visible for a second or two, but it’s there." The film, directed by Lew Landers, is about a kid who joins a rock band to earn money to support his drag racing habit. It stars John Ashley, Jody Fair and Gene Vincent. 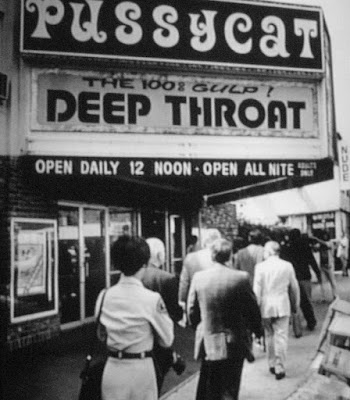 We get lots of 1970s shots of the theatre as the Pussycat in the documentary "Inside Deep Throat (Universal, 2005). Here, the jurors in the "Deep Throat" obscenity trial are visiting the theatre to see the film in its natural surroundings. The documentary explores the making of "Deep Throat" and its aftereffects. We also get views of the Optic, the Art Theatre and the Sunset Theatre. See the Historic L.A. Theatres In Movies post for shots of those theatres from the film. 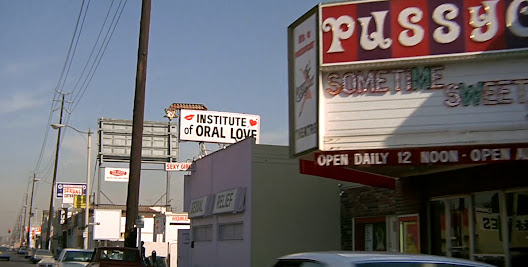 We get a quick drive by the Pussycat early in "Hollywood Boulevard." (New World Pictures, 1976). An aspiring starlet played by Candice Rialson thinks she's landed her first film job. She's really just been recruited to be the getaway driver for a bank robbery. The film about "the street where starlets are made" also features Mary Woronov, Paul Bartel and Jonathan Kaplan. Direction was by Joe Dante and Allan Arkush. Jamie Anderson did the cinematography. See the Historic L.A. Theatres in Movies post for shots of the Chinese Theatre and the Gilmore Drive-In from the film.

More Information: See the Cinema Treasures page on the Studs at the Pussycat for over 100 comments. Cinema Tour also has a page on the theatre. Joshua Barash has a nice night Studs marquee view on the WeHo City album on Flickr.