Opened: c.1975. The location is just south of Hollywood Blvd.  Running as a theatre when it first opened, it later morphed into a store selling adult videos and other related merchandise. 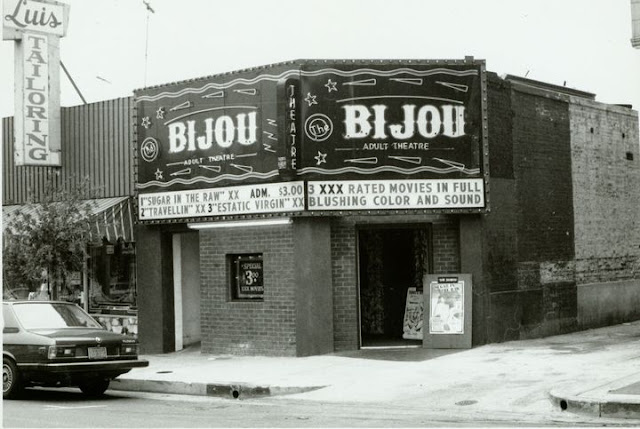 A photo in the Bruce Torrence Hollywood photographs collection. Thanks to Martin Pal for spotting it for his Noirish Los Angeles post #48484. 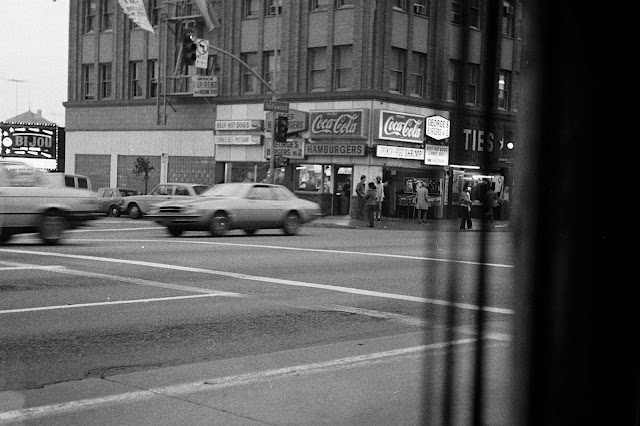 We're on Hollywood Blvd. at Cahuenga looking over toward the Bijou on the left. Thanks to Sean Ault for the photo taken by his grandfather, William E. Ault. 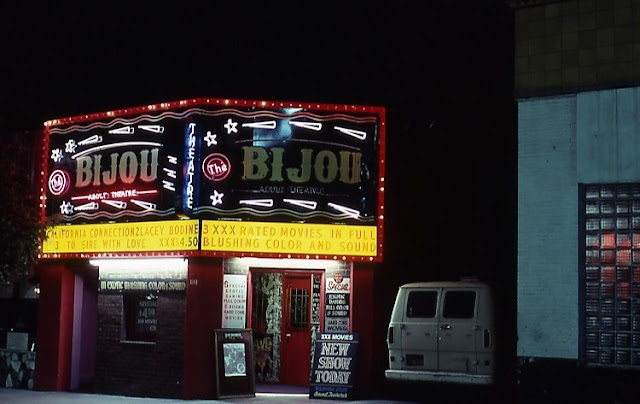 Thanks to American Classic Images for this 1983 look at the Bijou. 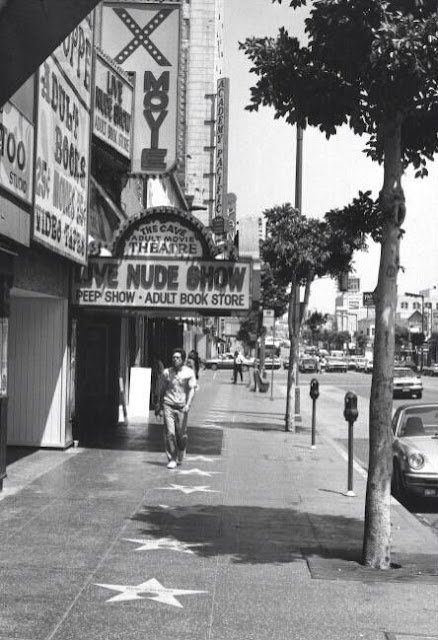 Located just east of the Vine Theatre, this venue later turned into a strip club called Déjà Vu. This photo from under the Vine marquee is one that once appeared on the Facebook page Photos of Los Angeles. 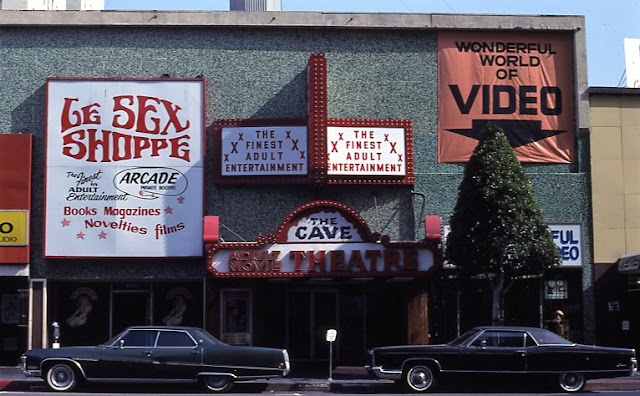 The Cave in April 1981. Thanks to American Classic Images for the photo. 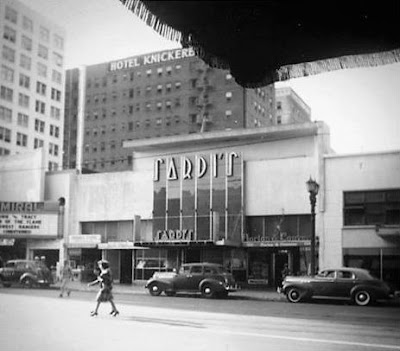 In an earlier life the Cave building had been Sardi's Restaurant. Thanks to Hector Acuna for this 1942 photo, a post of his on the non-public Facebook group Mid Century Modern Los Angeles. The Vine Theatre is running "Keeper of the Flame" with Tracy and Hepburn.

The Cave in the Movies: 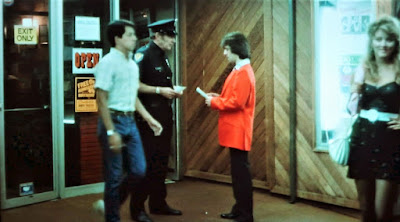 We see a lot of Hollywood Blvd. in Robert Vincent O'Neill's "Angel" (New World, 1984). Fifteen year old Molly is a high school student by day, working the street by night. The film stars Donna Wilkes, Cliff Gorman, Dick Shawn and Rory Calhoun. John Diehl is the killer preying on teenage hookers. Here outside the Cave the police getting the word out about the killer. 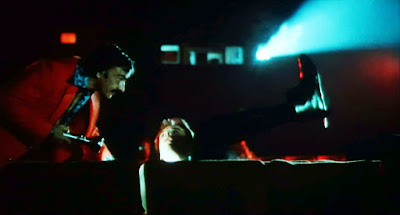 The manager of the Cave is telling a customer to get his feet off the seats. He recognizes the guy as the killer the police are looking for, finds the cops and the guy gets taken to a lineup. Molly recognizes him, a sloppy officer gets his gun taken, and the killer shoots his way out. See the Historic L.A. Theatres in Movies post for a dozen shots from the film. We get a this view of the Cave in "Jack's Back." (Palisades Entertainment Group, 1988). James Spader, Cynthia Gibb and Jim Haynie star in this tale of a serial killer in Hollywood paying homage to Jack the Ripper. Rowdy Herrington directed. The cinematography is by Shelly Johnson. See the Historic L.A. Theatres in Movies post for a shot of the Warner Hollywood from the film. Thanks to Eric Schaefer for spotting the theatres in the film and getting the screenshots. 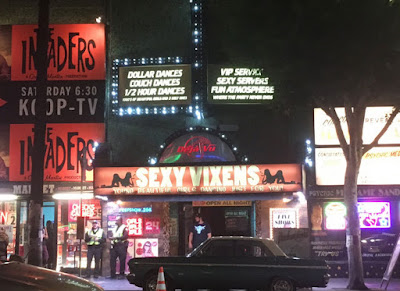 The building is fixed up as an establishment called "Sexy Vixens" in Quentin Tarantino's "Once Upon a Time in Hollywood" (Sony, 2019). Thanks to Ovidi D. for the photo. The film stars Leo DiCaprio and his friend Brad Pitt as an actor and stuntman trying to get work in the business in 1969. The Manson murder case also figures into the plot as the guys live next door to Sharon Tate, played by Margot Robbie. See the Historic L.A. Theatres in Movies pages for more photos of this building being redecorated as well as action at the Vine, Pantages, Ritz/Pussycat, Vogue, Cinerama Dome, Earl Carroll, Bruin and Fox Westwood Village theatres.

More Information: See the Cinema Treasures page on the Cave. 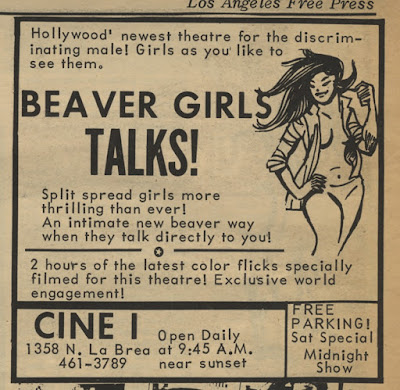 Opened: c.1968. The location of the building is a block south of Sunset Blvd.

"The building at 1358 was the Nico Charisse School of the Dances and Theater Arts, which officially opened in September 1937. A year later, the renowned dance instructor advertised his studio with the following proclaiming 'Isn't it significant that a 16-year old pupil of Charisse - Sid Finklea - was given a contract to succeed Prima Ballerina Danilova with Ballet Russe?' The name Finklea belonged to Tula Ellice Finklea, better known as Cyd. The young student would go on to marry her instructor in 1939, when she was 18. Keeping things musical during the 1940's, the American Operatic Laboratory ran the School of Piano Tuning and Maintenance - luring potential ivory tuners with the quote 'This Vocational Field Is Rich In Opportunity.'

The dance studio vacated the spot in the mid-1950's, and Charisse moved his school to 319 North La Cienega Blvd., and offered more contemporary styles; Modern, Calypso and Primitive. Ironically, the building found itself in the newspapers in 1963, when chiropractor Dr. Ruth Drown used the site as Drown Laboratories - albeit surreptitiously. Along with her daughter and two others, they were found guilty of bilking patients with fraudulent electronic diagnoses and treatments for non-existent diseases. Touting itself as a 'radio-therapy center,' the charlatans were accused of using worthless electrical devices. The Superior Judge declared the devices 'no more effective than voodoo or witchcraft.' It seems the quackery was not appreciated by the landlord. The 3000 square foot building was offered by a broker to suitable tenants, with the proposition 'can vacate present medical tenant within 60 days.' The broker also mentioned the building was adjacent to the Perry Mason Studios. Charisse (who died in 1970) would have been thrilled with what was being offered 50 years later, when 'Hollywood's Newest Theater for Male Viewing' showed 'How To Be a Dancer' in 1969. The Cine 1 advertised they'd lost their lease and were closing in August 1973."

Status: The building is still there on the southeast corner of La Brea and De Longpre. It's being used by the American Academy of Dramatic Arts. 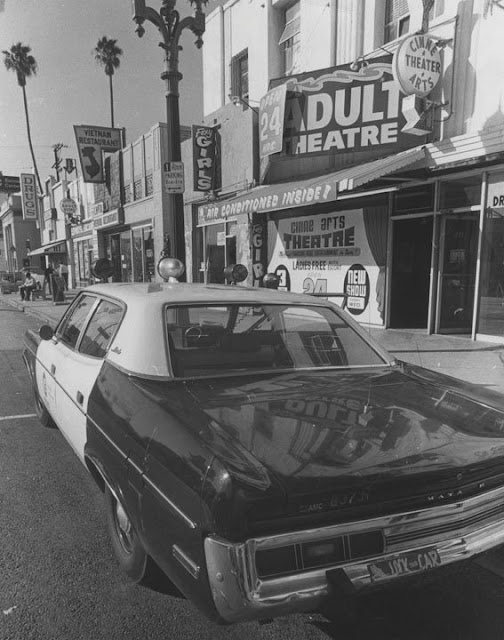 A vintage view of the Cinne Arts from Danny O'Connor on the Valley Relics Facebook page. Thanks to Ken Roe for spotting the post.

This one opened in 1970 in a deco building between Gramercy Pl. and Wilton Pl. and was open 24 hours a day. 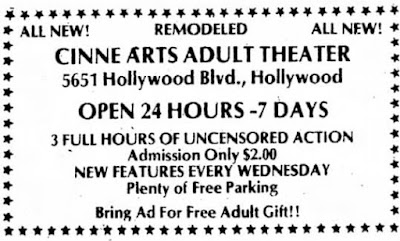 A Free Gift! Thanks to Ken McIntyre for spotting this 1974 ad.

The Cinne Arts in the Movies: 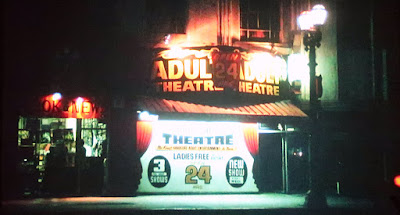 We pay a visit to the Cinne Arts in Robert Benton's "The Late Show" (Warner Bros., 1977). The film stars Art Carney and Lily Tomlin. See the Historic L.A. Theatres in Movies post for an interior view.

More Information: See the Cinema Treasures page on the Cinne Arts for all that's known.

Running in the 70s -- at least from 1971 to 1974, perhaps beyond. The location was on the east side of Western just south of Santa Monica Blvd.

A 1971 ad in the Times for the Film Festival. Thanks to Ken McIntyre for finding it.

Status: It looks like the building is gone. Just north of the lot is Catalina's Market, at 1070 N. Western. Just up the block was the Flick Theatre.

More information: Cinema Treasures has a page on the theatre but there's not much data.

Status: The building's still there, now a medical clinic.

More Information: See the Cinema Treasures page on the Flick.

Status: It's now the location of Atomic Tattoo. 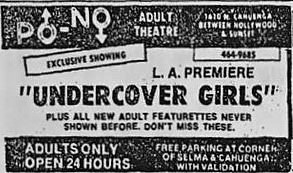 Running in the 70s in a building just north of Selma Ave.   The space, on the east side of the street, is now part of the Velvet Margarita Cantina. Thanks to Ken McIntyre on Photos of Los Angeles for the 1972 ad.

The Quickie operation later moved to 8325 Santa Monica Blvd. See the page for the Coast Playhouse, a later name for the theatre at that address.

More Information: See the Cinema Treasures for the Quickie Theatre at 8253 Santa Monica. 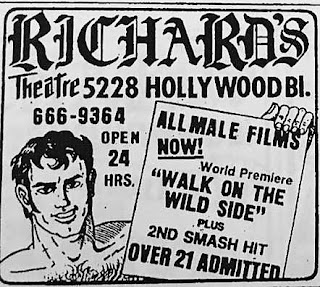 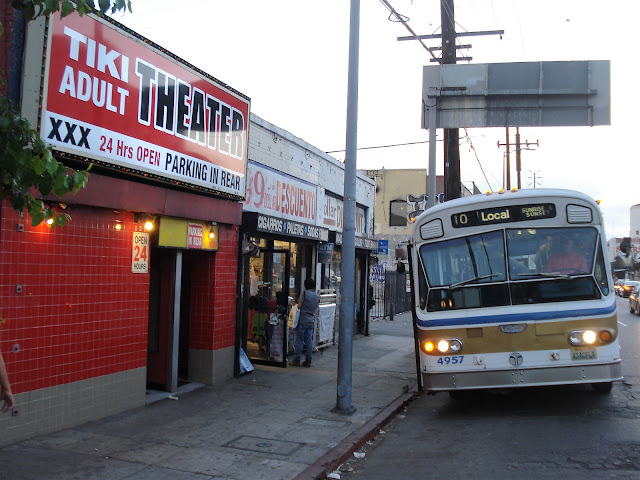 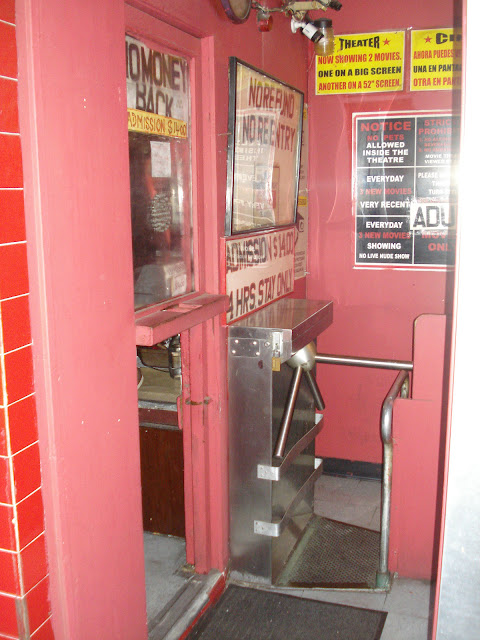 The entrance to the Tiki. It's a Sean Ault photo. 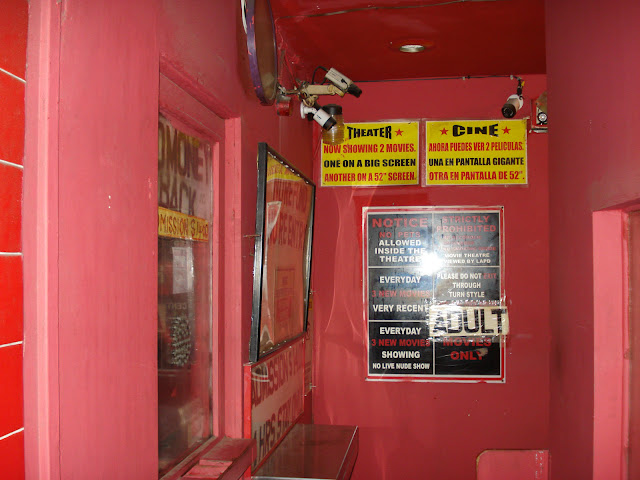 Another entrance view from Mr. Ault. 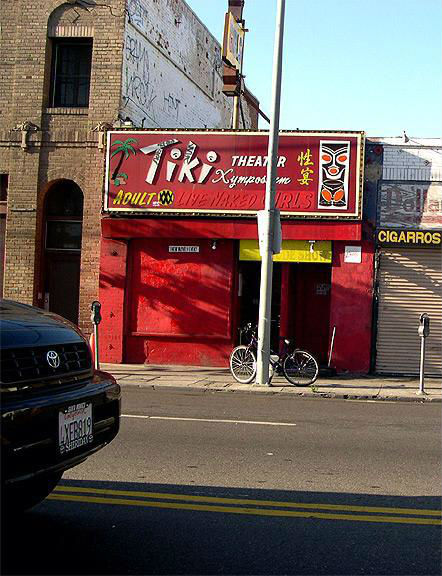 The Tiki from across the street. It's a photo from the Facebook page Photos of Los Angeles. 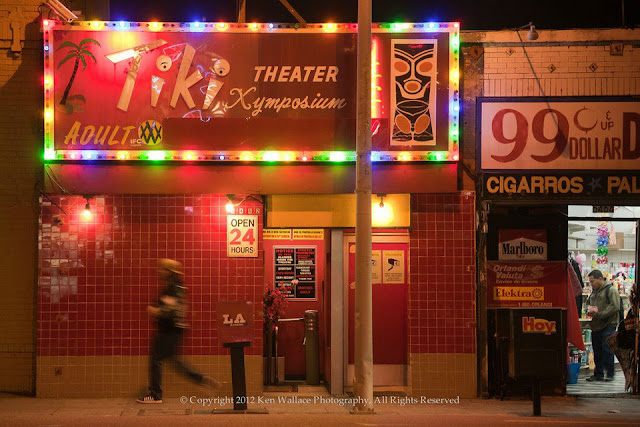 A lovely evening view by Ken Wallace that once appeared on Photos of Los Angeles. 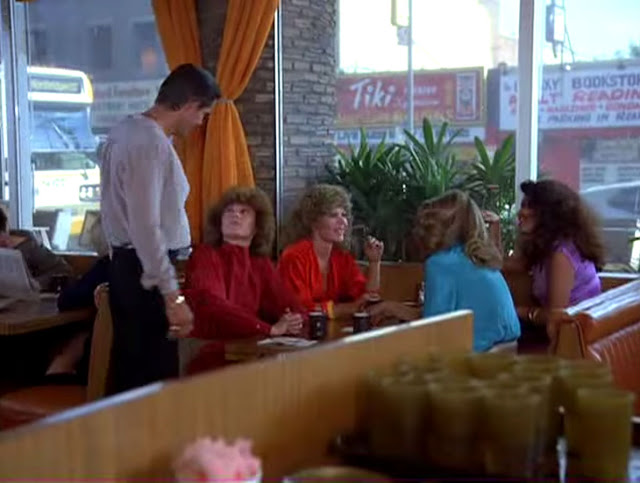 A look at the famous Tiki Theatre from inside the restaurant across the street. It's from "Cop Out," a 1979 episode of the TV show "Hart and Hart." Thanks to Sean Ault for the screenshot. As you might guess by the bus in the photo, transit history is his major passion. But theatres have a habit of popping up in the background of many of his finds.

More information: See the Cinema Treasures page on the Tiki. 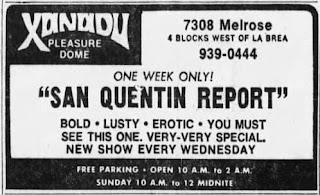 A 1972 ad. Thanks to Ken McIntyre for posting it on the Photos of Los Angeles Facebook page. 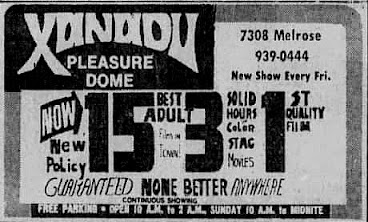 A 1974 ad that was posted by Ken McIntyre on the Photos of Los Angeles Facebook page where it inspired a number of comments about various Xanadus as well as concerning adult motels. The ad appeared directly above similarly sized one for the Plitt Century Plaza, running "Last Tango in Paris" with Marlon Brando.
The space once used as the Pleasure Dome has returned to retail use.

More information: See the page about the Xanadu on Cinema Treasures.