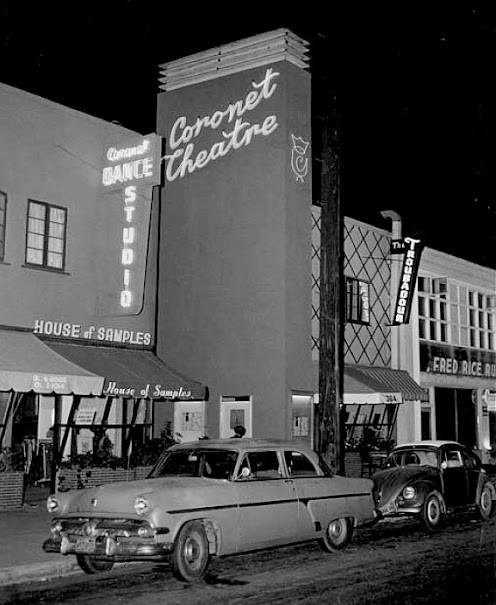 Opened: August 16, 1947 by Frieda Berkoff, a member of a famous Russian dancing family. The location is two blocks north of Beverly Blvd. The 1950s photo of the Coronet by Danny Rouzer is from the Tim Lanza Collection. It once appeared on the Largo at the Coronet website. In addition to the main theatre space, the building housed other rehearsal halls as well as acting and dance studios.

Film at the Coronet: One of the spaces in the building had a long history as a home for experimental film. Paul Ballard's Hollywood Film Society found a new home at the Coronet in the late 40s. Kenneth Anger showed some of his early works there. In 1950 Raymond Rohauer took over the operation with his "Society of Cinema Arts" and "Coronet Louvre" programming with daily screenings of classics, experimental and foreign films.

Programs at this "one man cinematheque" sometimes changed daily, some films ran longer. After a decade at the Coronet, Rohauer moved on to the Riviera/Capri, a twin venue that's now a single-screen operation called the New Beverly. In "Laboring in the Shadow of Hollywood," a November 6, 2011 New York Times, article Manohla Dargis, calls the Coronet Theatre's years under Rohauer "legendary."

The Coronet is discussed in "Alternative Projections: Experimental Film in Los Angeles, 1945-1980" (John Libbey Publishing, 2015). It's an anthology edited by David E. James and Adam Hyman with much of the content generated for the Getty Research Institute's "Pacific Standard Time" initiative. It's available from Indiana University Press or Amazon. There's an article about it on the Los Angeles Review of Books website. See the Alternative Projections site for, among other items, a short biography of Rohauer.

Tim Lanza discusses the Rohauer era at the Coronet at length in "Raymond Rohauer and the Society of Cinema Arts (1948-1962): Giving the Devil His Due," chapter 17 of the book. Thanks to Ranjit Sandhu for locating it. Some excerpts from Lanza's discussion:

"...Rohauer's involvement in film exhibition and distribution in Los Angeles beginning in the late 1940s, in particular his involvement in the access to and exhibition of experimental film, is not well known. But it is undeniable that the activities of his Society of Cinema Arts, particularly through the exhibition of film at the Coronet Theatre (where [Stan] Brakhage would briefly work and later refer to as the best public theatre for the regular presentation of film in the country), had a profound impact on a generation of filmmakers and scholars living in the Los Angeles area during the 1950s....

"In 1950, the twenty-five year old Rohauer began presenting occasional programs at the Coronet Theatre at 366 North La Cienega, which became for the next twelve years the Society of Cinema Arts's primary venue. The earliest announcement found for one of these programs was for a six day series co-sponsored by Kenneth Anger and Curtis Harrington's Creative Film Associates, entitled 'Illuminations." The program was billed as the West Coast premiere of ten new avant-guarde films, though the veracity of that claim is in doubt. The films screened nightly from 20-26 January 1950, and included Anger's 'Escape Episode' (1944), 'Fireworks' (1947), and 'Puce Moment' (1949; Harrington's 'Fragment of Seeking (1946) and 'Picnic' (1948); James Broughton's 'Mother's Day' (1948); and Sidney Peterson's 'The Lead Shoes' (1949).

"On 8 August 1950, the Society premiered what it called the 1st Annual International Film Festival, which offered over the course of the month nightly screenings organized into seven separate programs. While featuring important silent and sound films, such as Paul Leni's silent horror film 'Waxworks' (1924) and Sergei Eisenstein's 'Ten Days That Shook The World' (1928) and 'Thunder Over Mexico' (1932/34), half of the festival's programming days were devoted to experimental film. It included a four-day program of selections from the collection of the San Francisco Museum of Art such as Frank Stauffacher's 'Zigzag' (1948) and 'Sausalito' (1948). It also included a five-day program of American and French works, such as Gregory Markopoulos's 'Xmas-USA' (1949) and three films by Man Ray.

"There was also a five-day program entitled 'The Abstract Film As Entertainment," which included eight films by Norman McLaren. A preview of upcoming Society screenings at the Coronet, printed on the back of the festival announcement, lists a variety of American and European silent and sound studio pictures, short films about artists, and dance films. When taken with the experimental films from the festival, these other films provide a clear view of the programming direction that the society would take...

"What is most impressive is the sheer volume of work presented during each calendar period, and Rohauer's ability to sustain consistent screenings every day of the year for more than a decade. He ran multiple films each evening, as well as matinees on the weekends... Sometime between 1950 and the beginning of 1951, daily programming began in earnest at the Coronet, which Rohauer specifically stated was not a theatre; he instead dubbed it 'The Coronet-Louvre Museum of Arts and Sciences,' bringing 'genuine art and experimental film to the discriminating film devotee.'... The Coronet became one of the most important film venues in L.A...."

Lanza goes on to cite tributes from a number of filmmakers and scholars who attest to the amazing variety of Rohauer's programming and the influence it had on their film education. For more about Raymond Rohauer's dealings with Buster Keaton see Ranjit Sandhu's article on "The General." 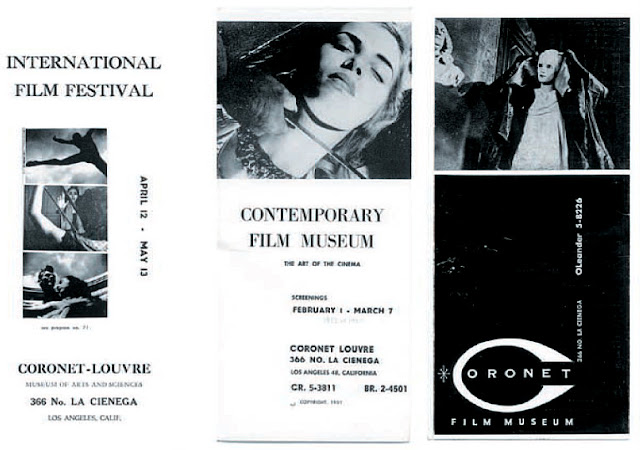 Several Coronet film calendar covers included by Tim Lanza in his "Alternate Projections" chapter. On the left it's one from April 12 to May 13, 1951. At center it's the schedule for February 1 through March 7, 1952. On the right it's the cover for the program running from June 20 until August 7, 1959.

Legit at the Coronet: The theatre has been mostly famous as a live theatre venue, hosting over 300 productions. It opened with the world premiere of Bertolt Brecht's "Galileo" directed by Joseph Losey and starring Charles Laughton. This was followed by the west coast premiere of Thornton Wilder's "The Skin of Our Teeth."

A 1947 ad for "Dark of the Moon." Thanks to Ken McIntyre for locating this for a thread about the theatre on the Photos of Los Angeles Facebook page.

In February 1948 the theatre opened a production of "The Stone Jungle" directed by Lloyd Bridges, starring Shepperd Strudwick and featuring a very young Russ Tamblyn. Russ talks about it in a "Here's the Thing" podcast.  Thanks to Ken McIntyre for locating the ad. 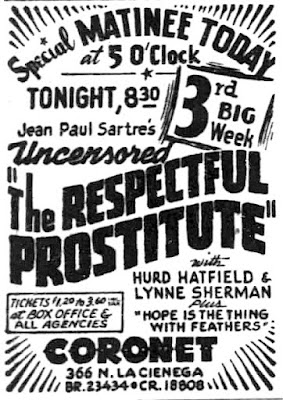 A 1949 ad for a production of Jean Paul Sartre's "The Respectful Prostitute." Thanks to Ken McIntyre for locating it for a post on the Photos of Los Angeles Facebook page.

In 1951 noted Broadway actress Irish March directed a production of Claude Andre Puget's "The Happy Days" starring Kay Christian, Dana Earle and Micaela Mitchell. This ad, and a review by Katherine Von Blon, appeared in the July 21, 1951 issue of the L.A. Times.
In 1961 the world premiere of Edna St. Vincent Millay's "Conversations at Midnight" was at the Coronet. The theatre was home to Ray Bradbury's Pandemonium Theatre Co. in the 60s. 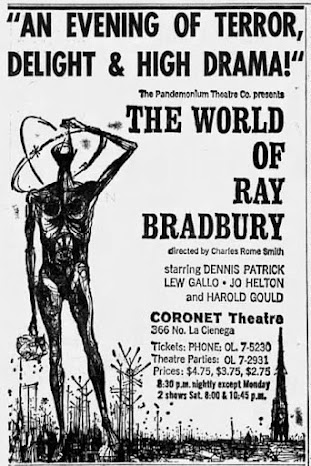 "The World of Ray Bradbury" at the Coronet in 1964. Thanks to Ken McIntyre for locating the ad. Bruce Kimmel notes: "Opened on October 14, 1964 and the 'limited engagement' lasted all the way to Feb 14th, 1965 and was followed by another Bradbury play, 'The Wonderful Ice Cream Suit.'" 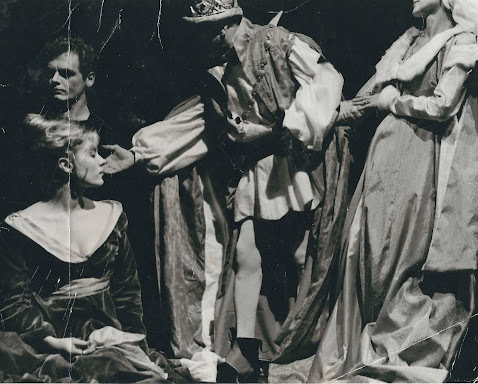 A view from a production of "Hamlet" in the 1960s. It's a photo from the collection of the late Petrie Robie. 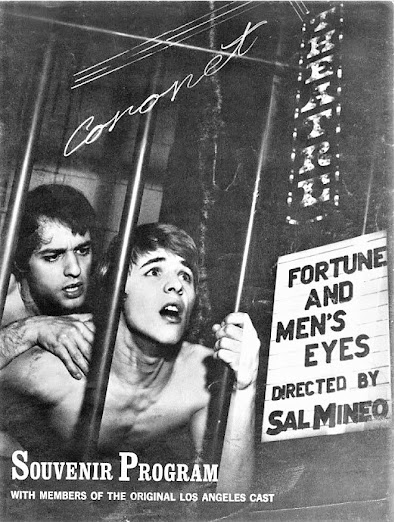 In December 1968 the Coronet was the venue for the west coast premiere of John Herbert's "Fortune and Men's Eyes." The regular run opened January 1969 and ran until July. Thanks to Noirish Los Angeles contributor Ethereal Reality for finding the program. See his Noirish Los Angeles post #50030 for several inside pages. 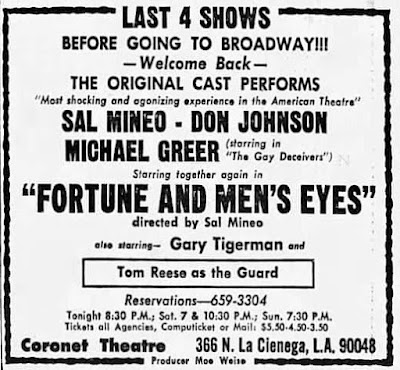 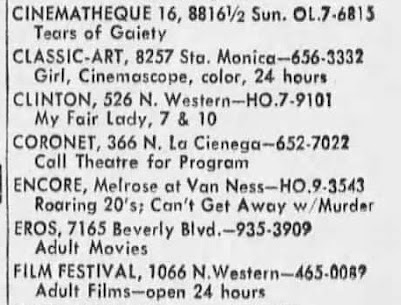 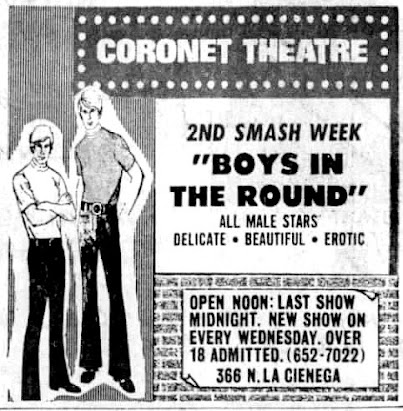 A 1972 ad for "Boys in the Round" that was located by Ken McIntyre. 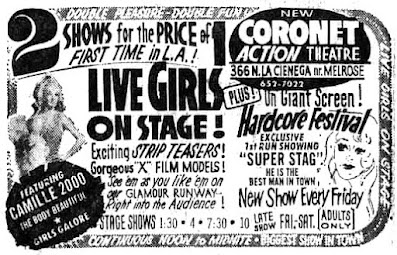 "The New Coronet Action Theatre" represented a quest for a different clientele with a burlesque operation. It's a 1973 ad, another find by Ken McIntyre. It's unknown who the theatre was leased to at the time.

Another 1973 ad located by Ken McIntyre.

Ms. Berkoff, then Frieda Berkoff Gellis, continued to own and manage the the building until 1976 when, due to illness, she turned it over to her daughter Petrie Gellis Robie. Frieda died in 1991.
From 1981 to 1988 the building was home to L.A. Public Theatre, directed by Peg Yorkin. From 1990 to 1994 it was programmed by Serendipity Theatre Co., a children's theatre operation. In 1996 Robie sold the building for $1.7 million to Deborah Del Prete and Gigi Pritzker of Dee Gee Entertainment. They continued to book legit shows and added a 99 seat second venue in former office space.

The data appeared in the 1949 edition of the ATPAM Theatre, Arena and Auditorium Guide. Thanks to Bob Foreman for posting the publication on his Vintage Theatre Catalogs blog. They noted that the rent at the time was $500 per week.

The Coronet in music videos: 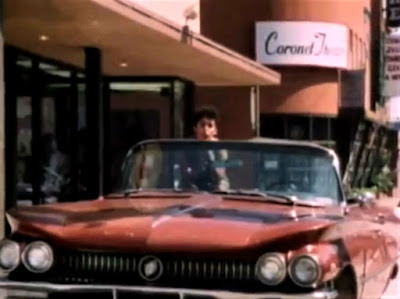 The exterior of the theatre is seen in several shots of "Our Lips Are Sealed" from the Go-Gos' 1981 album "Beauty and the Beat." It's on YouTube. Thanks to Jonathan Raines for spotting the theatre. It's unknown where the stage views were shot -- perhaps also at the Coronet.


Status: Since 2008 the theatre has been the home of Mark Flanagan's Largo at the Coronet, featuring comedy and music performances. The Largo had earlier been in a smaller facility at 432 N. Fairfax. See the May 18, 2008 L.A. Times story "Largo gets new lease on life at the old Coronet." 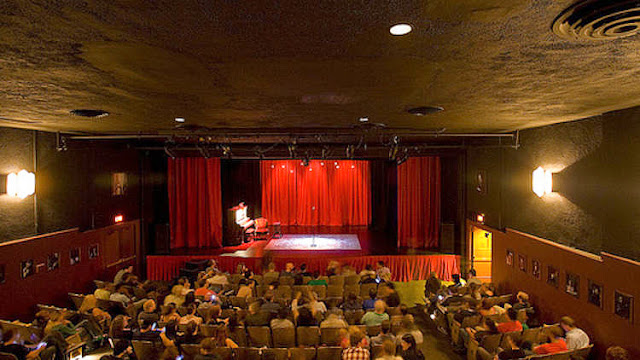 A look down from the booth. It's a photo credited to Largo that appears on a Time Out page about the venue. 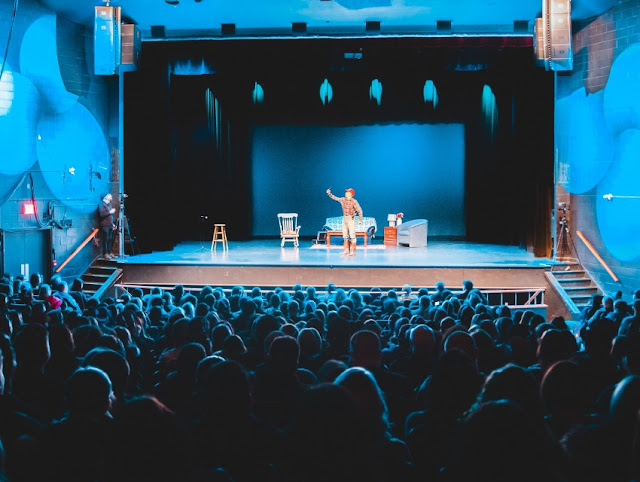 A photo by Erik Mclean appearing on the page about the Coronet on the site City Seeker. 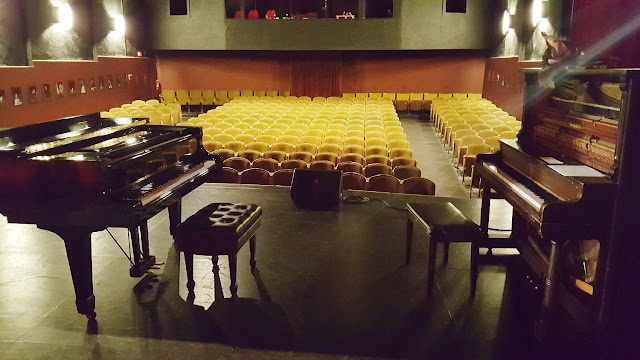 A 2016 view to the back of the house from Largo on Twitter. 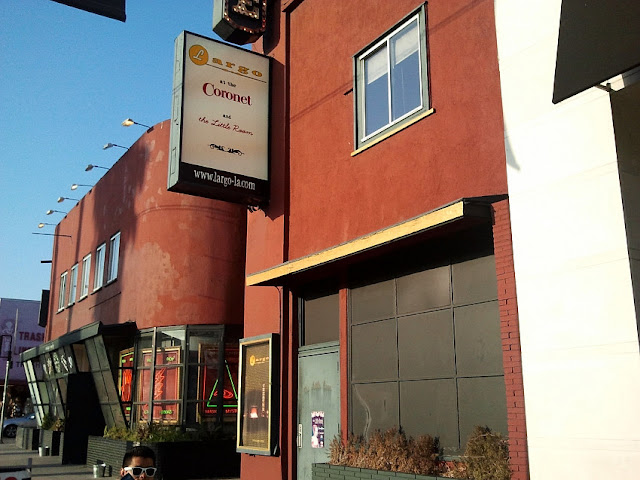 A view north along the facade that appears on the site City Seeker.

The building in 2021. Photo: Google Maps 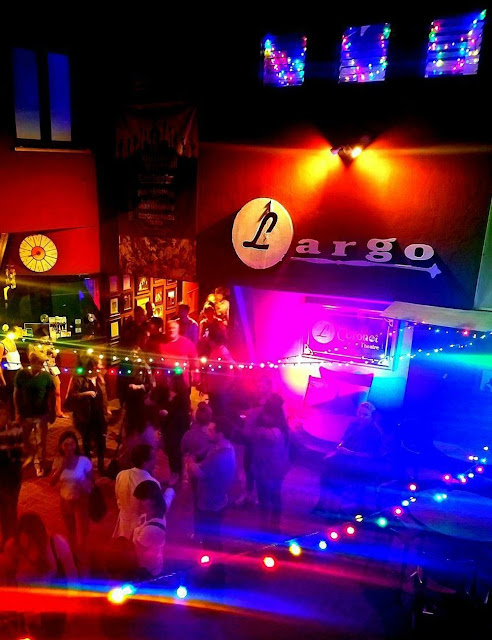 A courtyard shot from the page about the venue on the site See Tickets. 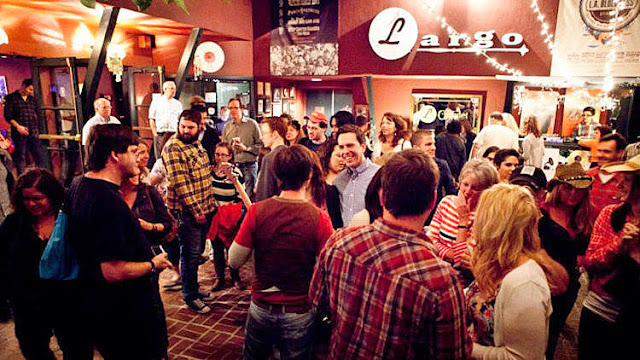 A photo by Lincoln Andrew DeFur for Largo that appears on the site Time Out.

See "Inside LA Stage History: the Coronet Theatre," a 2016 article by Julio Martinez on the site @ This Stage Magazine from the L.A. Stage Alliance.

The Coronet is discussed as a home for experimental film beginning on page 218 in David James' 2005 book "Most Typical Avant Garde: History and Geography of Minor Cinemas in Los Angeles." The author is a professor in the school of Cinema-Television at USC. The book is available from the University of California Press or Amazon. A preview is available on Google Books.

The Coronet is one of eight theatres discussed in Jon Ponder's 2018 Wehoville article "Vanished Venues: The Forgotten History of West Hollywood's Old Theatre District." Also see the separate chapter about the Coronet.

See the Wikipedia page on the history of the Coronet. Yelp has a page on Largo at the Coronet that includes some photos.