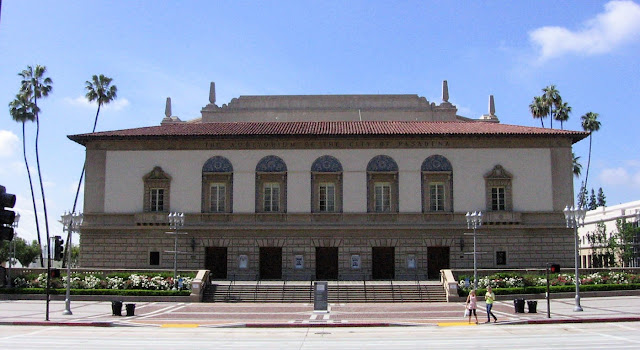 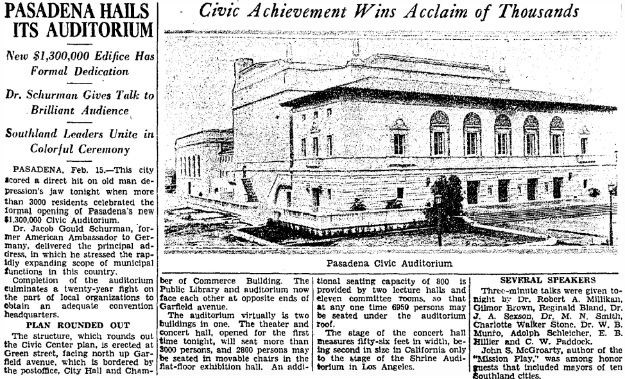 An article about the opening appearing in the February 16, 1932 L.A. Times. 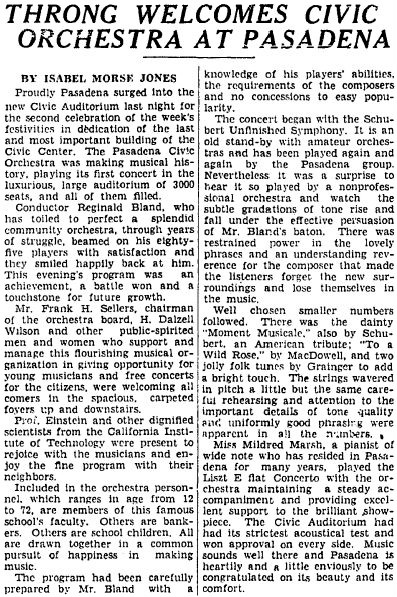 A February 18 Times article discussing the second night of the opening, February 17. Also in the Times on the 18th was an article headed "Scientists Will Speak On Peace" about an event scheduled for February 27 that would feature Albert Einstein and others intended "to give the youth of Southern California a comprehensive view of the problems of the day..."  Thanks to Mike Hume for finding the Times articles. Visit the fine page about the Civic on his Historic Theatre Photography site.

Architects: Bergstrom, Bennett, Haskell and Stanton. Fitch Haskell was the chief designer. Edwin Bergstrom had designed the Metropolitan Theatre (1923, later called the Paramount) as well as many major L.A. commercial buildings. John Cyril Bennett had earlier designed the Raymond Theatre (1921). Jess Stanton designed the building's exterior tiles and interior decorative scheme. The ceilings were executed by Giovanni Smeraldi, best known for his work at the Biltmore.

The funds for the building came from the City's Water & Power department. The Civic Auditorium was the last of three major Civic Center construction projects. The area was planned by Bennett, Parsons and Frost, a Chicago firm that was the successor to Daniel Burnham. The earlier Library building was done by Myron Hunt. The City Hall was by Bakewell & Brown of San Francisco.

Seating: 3,029 originally, now 2,997. In addition to the main theatre space, the second floor Gold Room above the lobby can handle up to 300 for receptions and parties. There's also a 17,000 sf exhibition hall behind the stage that was restored in 2015. 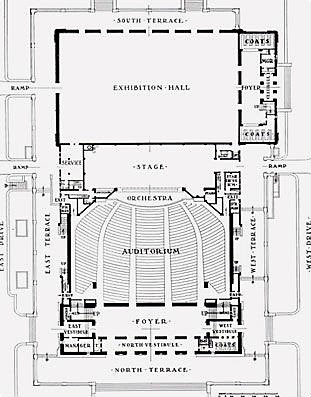 The layout of the Pasadena Civic complex.  The illustration is from the Civic's Technical Specs page on their website.  There's also a separate tech pdf with more details.

Stage specs:  The proscenium is 56' wide x 31' 6" high. The stage depth is 43' from the smoke pocket to the back wall, 46' including the apron. The grid height is 74'. The counterweight system is operated at stage level stage right. There are also pinrails on flyfloors both stage left and stage right. For more data see the page about the stage.

Organ: It's a 5/28 Moller, the former BBC/Reginald Foort touring instrument. It was installed in 1979. The instrument was profiled in the April 1980 issue of the magazine Console. Thanks to Mark Herman of the Civic it's available as a pdf via Mike Hume's Historic Theatre Photography site.

Status: The theatre is operated by the Pasadena Center Operating Company, an entity that also runs the Convention Center. It's used for a wide variety of touring legitimate theatrical productions, concerts, award shows and special events.

The Pasadena Civic in the Movies: 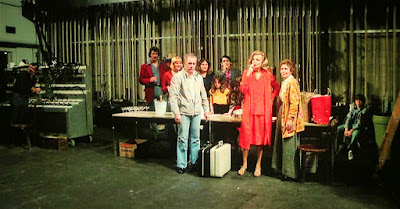 The Civic is used for interior shots as a Broadway theatre in the John Cassavetes film "Opening Night" (Faces Distribution, 1977). Here Gena Rowlands is waiting for her cue in a show that isn't going well. She's been drinking and is troubled about the part. The film also stars Ben Gazzara, Joan Blondell, Paul Stewart and Zohra Lampert. See the Historic L.A. Theatres in Movies post for six more views of the Civic as well as shots of the Arcade Theatre and the Fox Ritz.

We get a look at the exterior of the Civic as the location for Jason Bateman's spelling bee finals in "Bad Words" (Focus Features, 2014). The interiors were done elsewhere. In the film they say the interior views are at "Figueroa Hall."

The Civic stands in for an auditorium in China in Steven Soderbergh's "The Laundromat" (Netflix, 2019). The film stars Gary Oldman, Antonio Banderas, Meryl Streep, James Cromwell and many others in a collection of stories about shady financial practices including offshore accounts, shell companies and money laundering. Thanks to Mike Hume for the screenshots. See the Historic L.A. Theatres in Movies post for five more views from the scene. 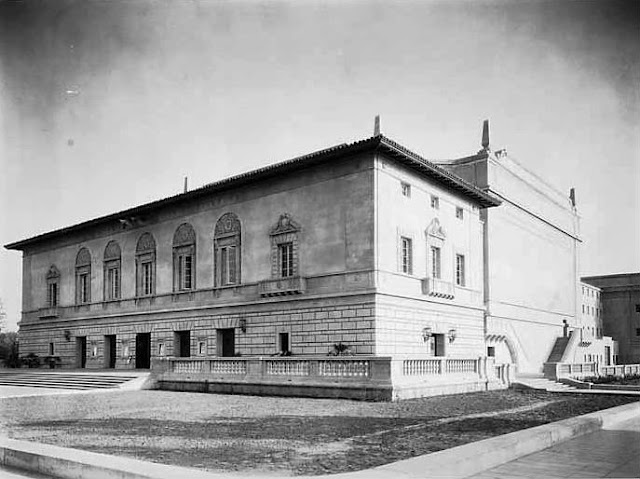 A 1932 look at the exterior of the Civic Auditorium by Mott Studios. It's in the California State Library collection, one of eleven photos in their set #1387322. 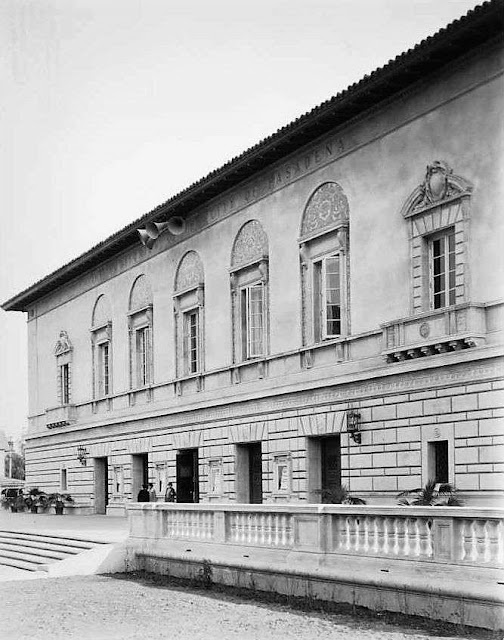 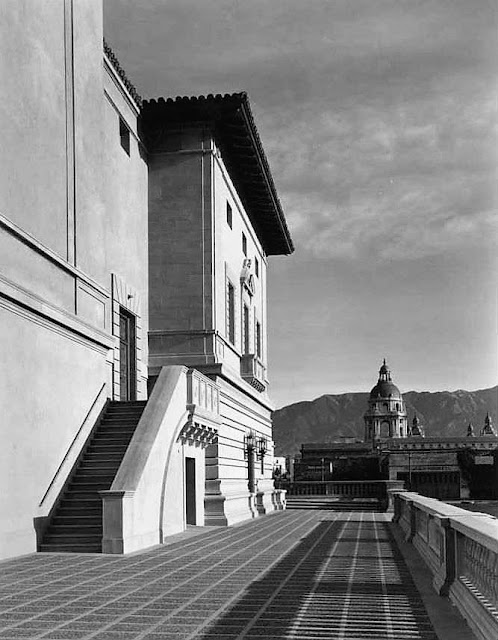 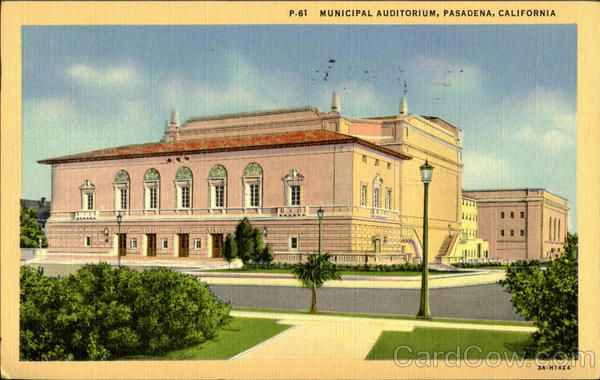 An early postcard from the site Card Cow. 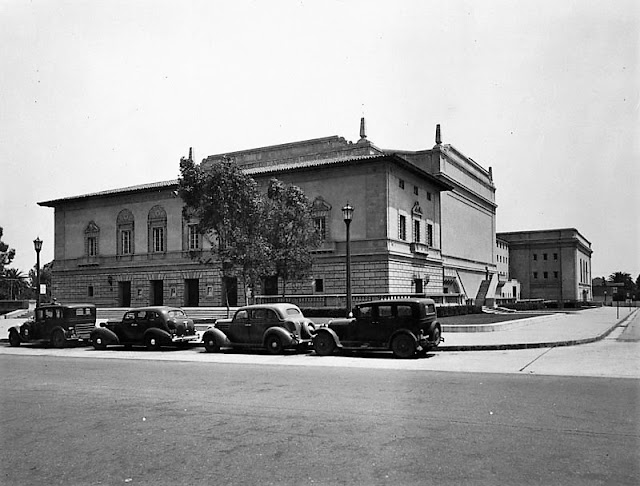 A 1937 photo from the Los Angeles Public Library collection. 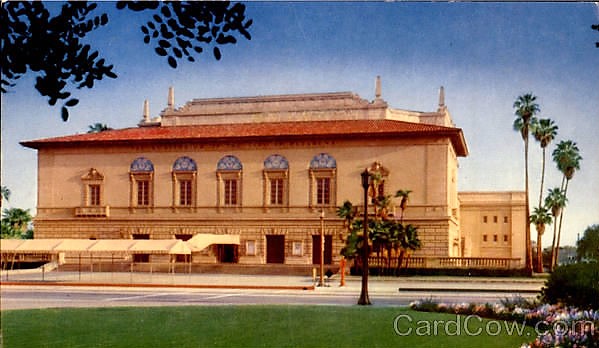 Another postcard appearing on Card Cow. The caption reads: "The Civic Auditorium (costing $1,250,000) is especially noted for the dances given by top-ranking orchestras, where over 3000 may dance in the large Exhibition Hall. The theatre, which is used for operas, concerts and lectures, seats 3000 persons." 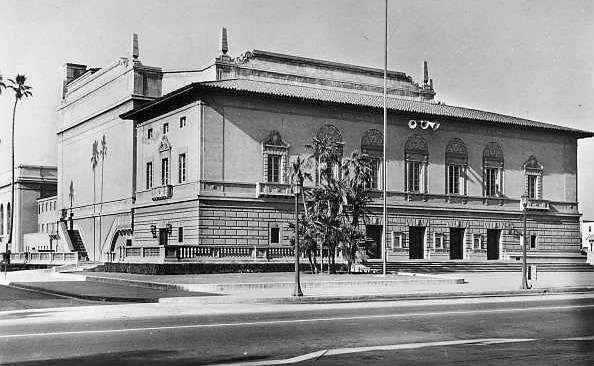 A 1944 view of the Civic Auditorium from the great Frasher Foto Card collection at the Pomona Public Library. 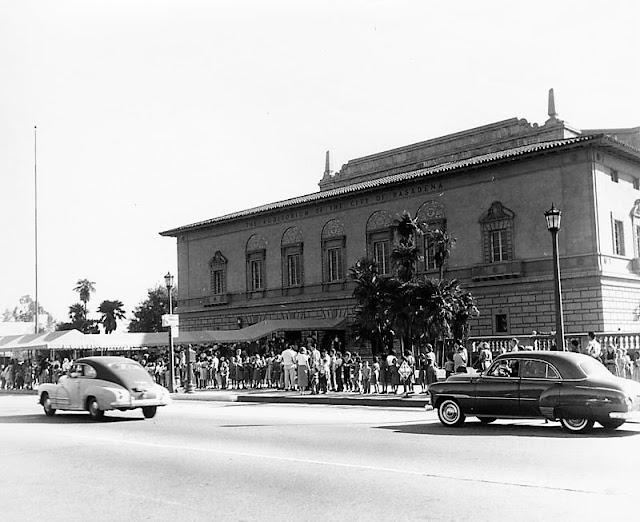 A late 40s look at the theatre by Harry Quillen that's in the Los Angeles Public Library collection. 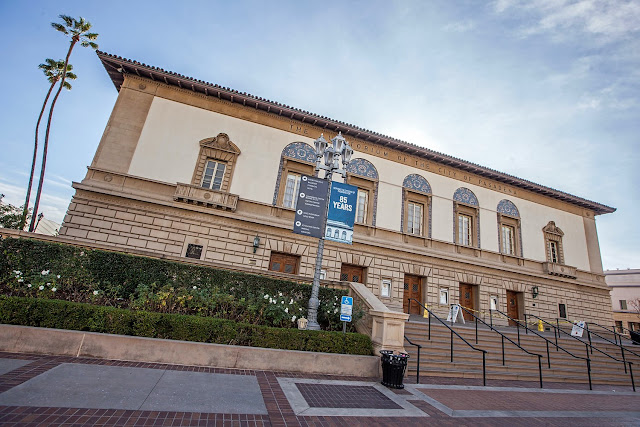 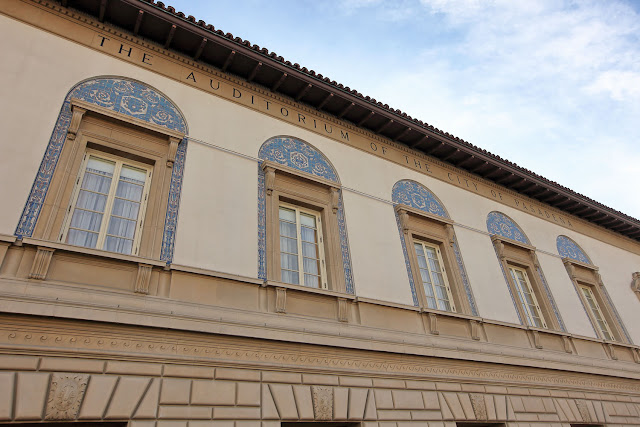 A second floor detail. Behind the windows is the Gold Room, located above the lobby. Photo: Mike Hume - 2018 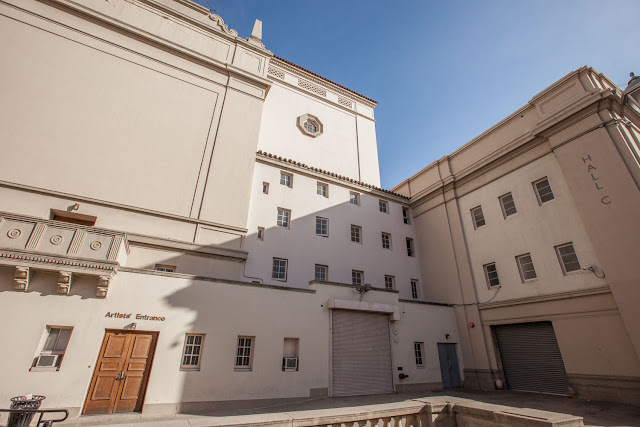 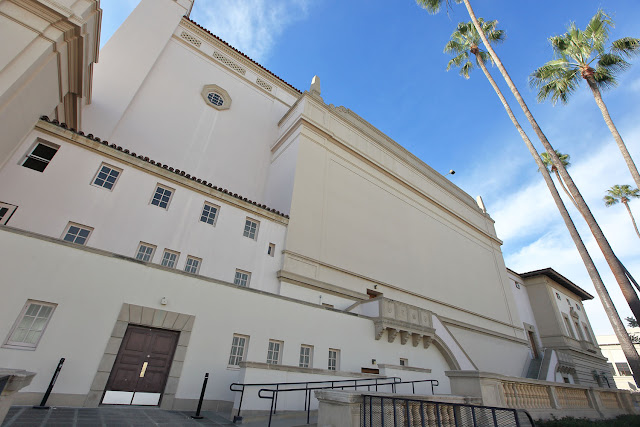 The east side of the Civic. Photo: Mike Hume - 2018. Thanks, Mike! Visit his Historic Theatre Photography site for hundreds of great photos of theatres he's explored. And, of course, there's a lovely page on the Pasadena Civic Auditorium.