Opened: October 12, 1920 as Bard's Hill Street Theatre. The opening bill was "The Fortune Teller" starring Marjorie Rambeau plus "One Week" with Buster Keaton. In this 1949 view looking north the Town is over on the right running "Top 'o the Morning" with Bing Crosby. The photo came from Tom Wetzel's now-vanished site "Uncanny."

Lou Bard also ran another Hill St. theatre, the College. His circuit later included the Olympic and the Vista as well as theatres in Pasadena, Glendale, West Adams and Alhambra. In the 1921, 1922 and 1923 city directories this one is listed as the Bard Theatre.

Architect: Albert C. Martin remodeled an existing one story building to use as a theatre.

An October 1920 pre-opening ad in the Times. 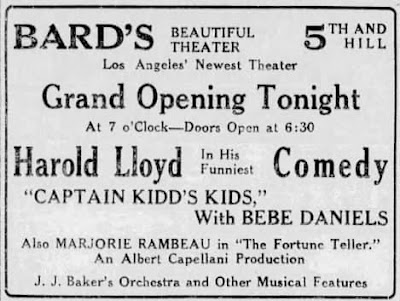 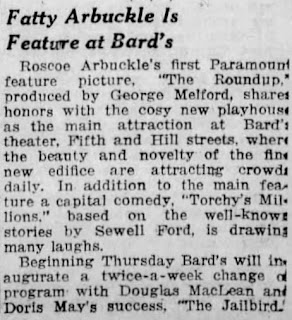 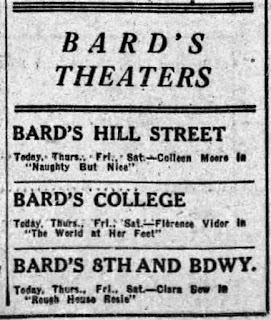 A 1927 ad in the Times for the three Bard theatres downtown. "Naughty But Nice" was a June release. Thanks to Ken McIntyre for finding these newspaper items. 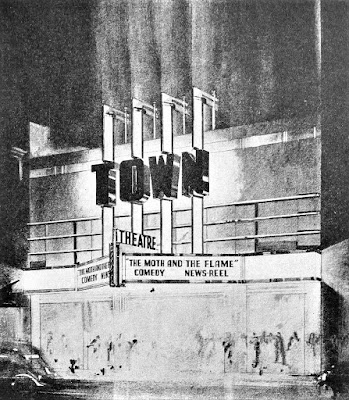 In the 30's it was renamed the Town Theatre. This sketch of a modernized facade and signage scheme designed by Anson Boyd appeared in the March 9, 1935 issue of Motion Picture Herald with an article titled "New Theatres From Old: The Front." In addition to the Town letters, the vertical pylons were also going to be internally illuminated. The facade did indeed get modernized, although not with the signage we see here. 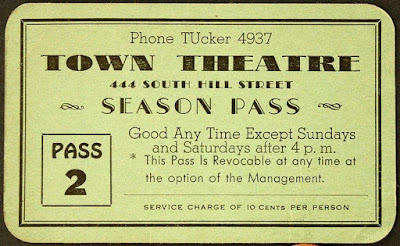 A season pass for two. Thanks to Sean Ault for finding it.

On February 4, 1966 it became the Pussycat, the first theatre in the chain founded by exhibitor Dan Sonney and filmmaker Dave Friedman. Later Vincent Miranda bought into the chain.

An ad for the theatre showing the first version of the Pussycat logo.

Status: Closed in September 1985 and was later demolished. The current building on the site dates from 1987 and now houses a jewelry store. It was a McDonalds when first constructed but they only stuck around until 1992.


The Town in the Movies:

A look at the theatre when it was the Pussycat from the film "Cleopatra Jones" (Warner Bros., 1973). Jack Starrett directed the film, starring Tamara Dobson, Bernie Casey and Brenda Sykes. Oh, and let's not forget Shelley Winters in a bright red wig.

A moment later the guy who was under surveillance is inside getting some popcorn. Thanks to Jay Allen Sanford for spotting the Town in the film. 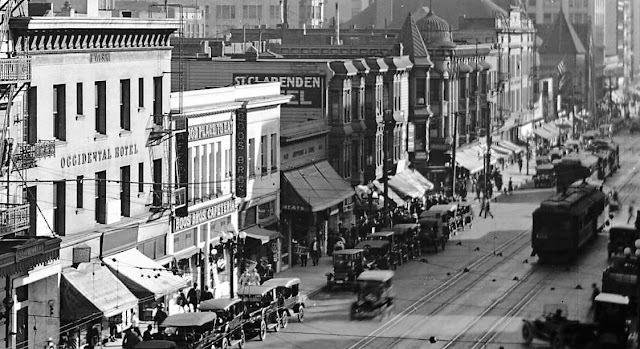 c.1912-1919 - A detail from a photo looking south on Hill toward 5th St. The one story building with the awning saying "Meat" is what was turned into Bard's Hillstreet. Thanks to Cinema Treasures researcher Joe Vogel for spotting the California Historical Society photo in the USC Digital Library collection. 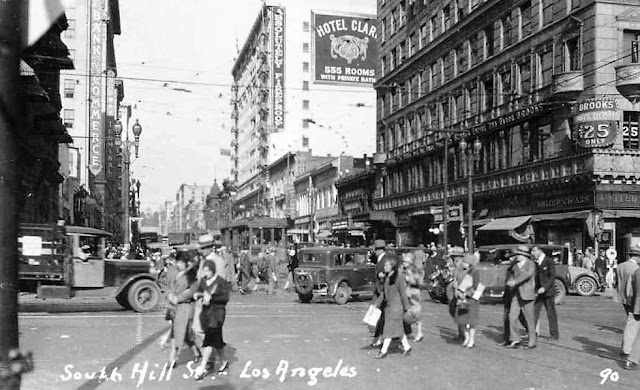 1920s - A view looking north on Hill St. The Town is on the right side of the street, just past the building on the corner. The card is in the Metro Archive and Library collection on Flickr where they date it as 1925. It's in their Downtown Los Angeles album. 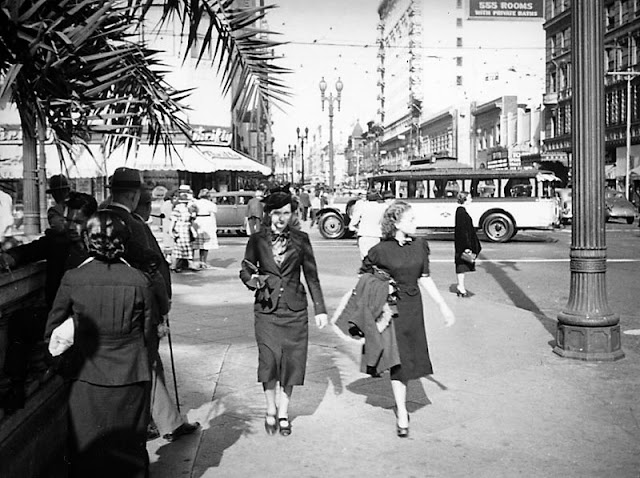 c.1937 - A shot by Herman Schultheis looking north on Hill from 5th with the theatre over on the right behind the end of the bus. Thanks to Ken McIntyre for finding the photo in the Los Angeles Public Library collection.

On the extreme left is a corner of Pershing Square. Across the street with Thrifty Drug on the ground floor is the Title Guarantee and Trust Company Building (John and Donald B. Parkinson, 1930). On the extreme right is the Hotel Portsmouth, aka the Pershing Square Building. The taller building behind it is the Hotel Clark (Harrison Albright, 1912). 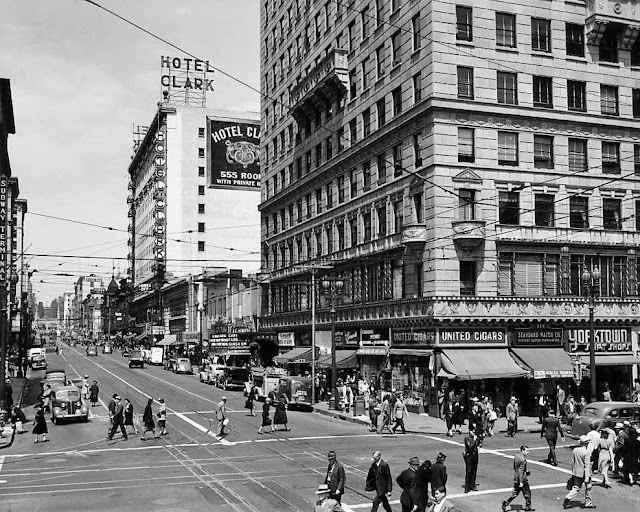 1939 - A Dick Whittington Studio view showing a glancing view of the Town Theatre marquee on the right. It's in the USC Digital Library collection. 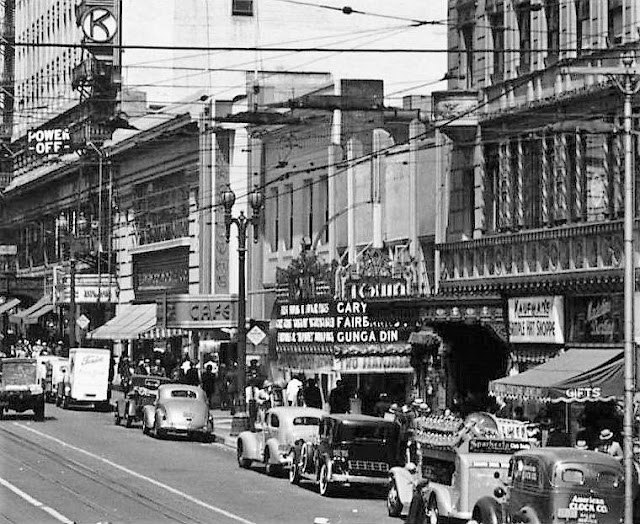 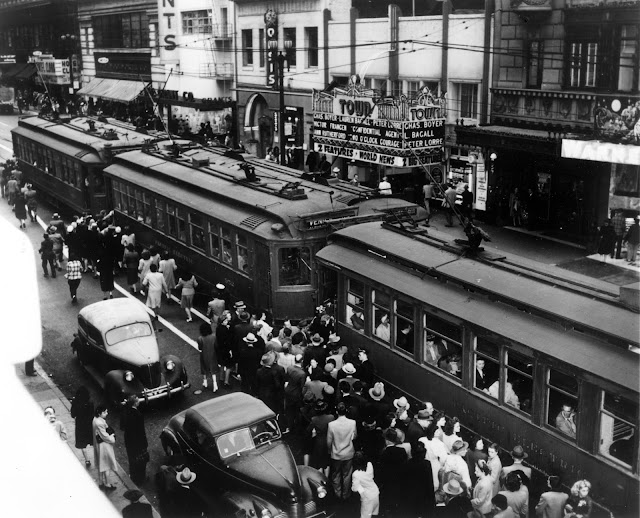 1946 - A lovely May view looking over the Venice Short Line cars toward the Town. They were running "Confidential Agent" with Charles Boyer, Lauren Bacall and Peter Lorre along with "Two O'Clock Courage." The photo is in the collection of Metro Archive and Library on Flickr. 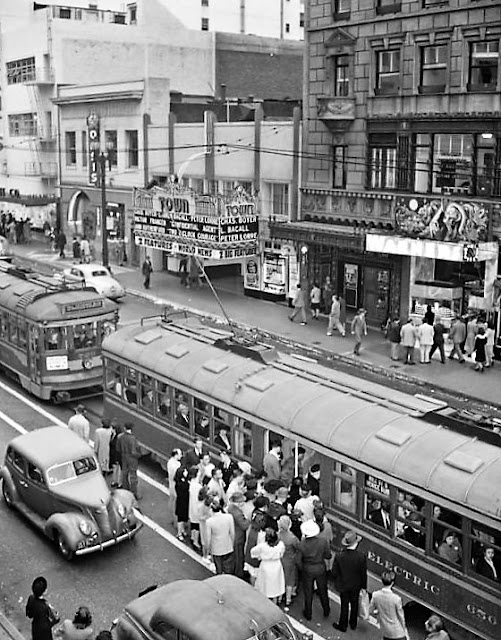 1946 - Another "Confidential Agent" take. Thanks to Ken McIntyre for finding this one for a post on the Photos of Los Angeles Facebook page. It's in the Pacific Electric album of the Metro Library and Archive on Flickr. 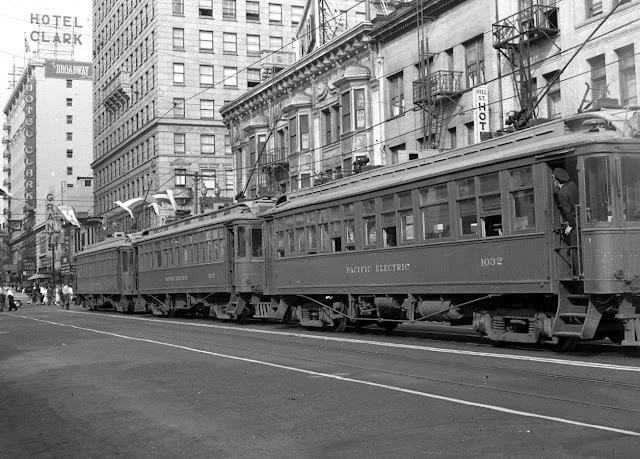 c.1946 - A view north on Hill. toward 5th. Thanks to Sean Ault for sharing the photo from his collection. 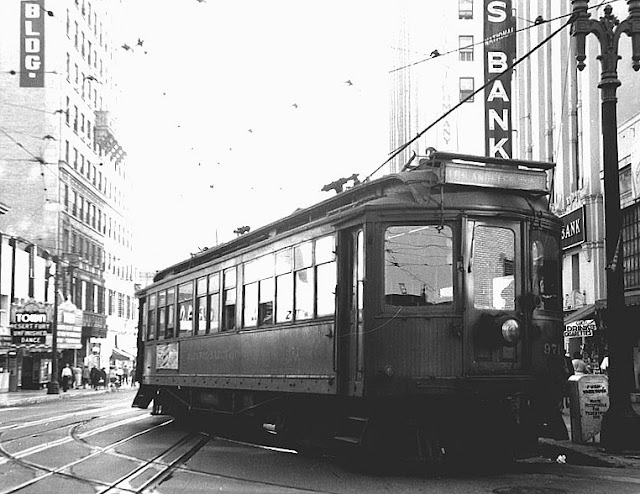 c.1947 - Looking south on Hill from the Subway Terminal Building with the Town playing "Desert Fury," a July 1947 release starring John Hodiak and Lizabeth Scott about a Nevada casino owner's troubles with a mobster. The co-feature was "The Unfinished Dance," a November 1947 release with Margaret O'Brien and Cyd Charisse. It's a photo appearing in the MTA collection that was taken by Robert Loewing and is owned by Craig Rasmussen. Thanks to Sean Ault for spotting it in the collection. 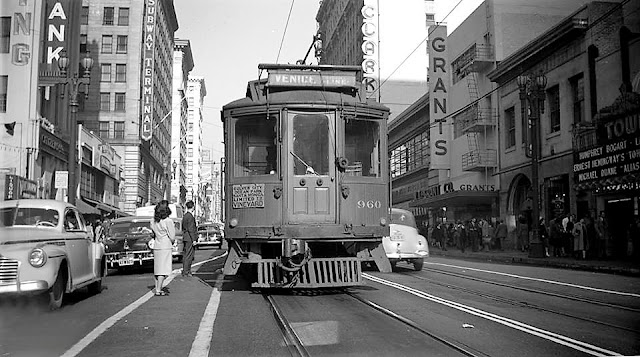 1948 - Passengers waiting to board Pacific Electric's Venice Short Line car 960. We're looking north on Hill in an Alan K. Weeks photo from the Metro Archive and Library collection. There's a slice of the Town's marquee over on the right. They're running "To Have and Have Not" with Bogie and Bacall from 1944 along with "Alias Mr. Twilight" starring the now-forgotten Michael Duane. It was a December 1946 release. Thanks to John Lee for finding the image in the collection for a post on the Photos of Los Angeles Facebook page.

Mr. Weeks had commented: "We hear so much about the Santa Monica Air Line which only made one round trip a day carrying roughly fifty people. But the Venice Short Line carried thousands a day each way to Venice, Ocean Park and Santa Monica. This line was abandoned on September 17, 1950. They had to run one round trip a day for a month or so because of franchise rules.

"Right after abandonment of passenger service a large storm drain was installed and cut right across the right of way. I can not remember the exact location but it was a mile or so East of Venice. We had to walk across a plank over the trench to reach another Franchise car on the East side of the trench. Then we proceeded to Downtown Los Angeles.

"The 900 and 1000 class cars were the last of the old wooden cars and both were very fast cars. When I was going to Audubon Jr. High School some of the guys I knew would take a towel, hop on this line and spend the day at the beach and come back. 25 cents each way. I loved to stand out on the back platform where it was open as we raced along at what seemed like high speed. Those kind of days are long gone." 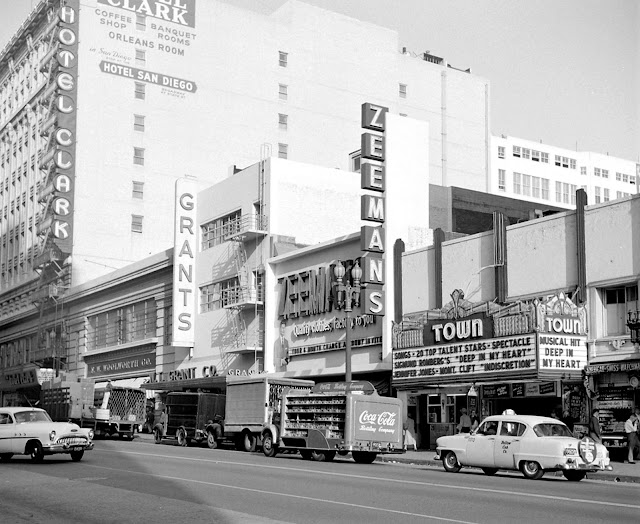 1955 - A photo from the Getty Archives appearing on Flickr. Thanks to Cinema Treasures contributor Nathan Marsak for posting a link to it. He notes that it is in the Leonard Nadel Collection, indexed under "Traffic, Land Use, Housing and Street Conditions, Shopping." 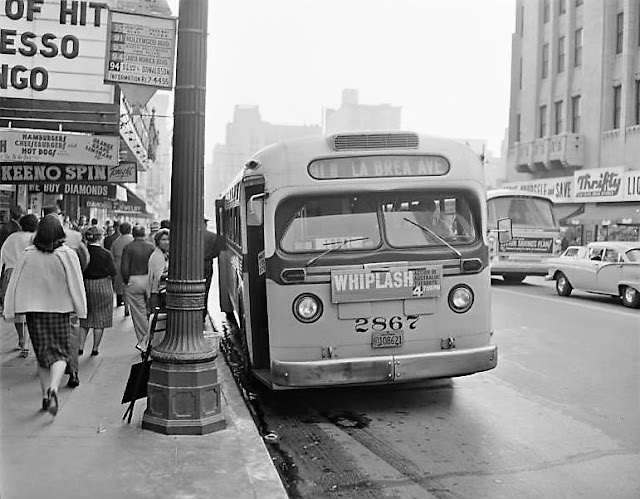 1960 - A look south on Hill with the Town playing "Expresso Bongo," a film starring Laurence Harvey and Sylvia Syms that got an April release in the U.S. Thanks to Ken McIntyre for finding the photo. He had it as a post on the Photos of Los Angeles Facebook page. 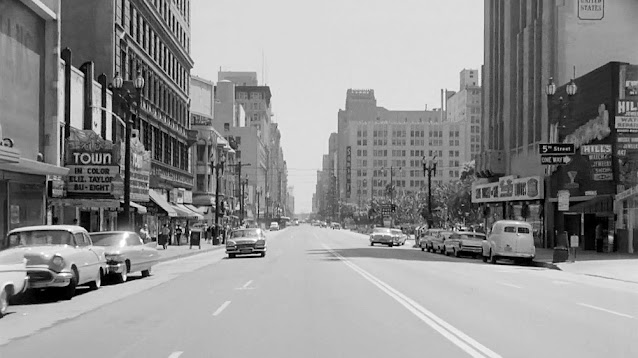 1961 - The theatre running "BUtterfield 8," a November 1960 release with Elizabeth Taylor and Laurence Harvey. It's a view from three minutes of footage taken for process shot use that begins 33:15 into Rick Prelinger's "Lost Landscapes of Los Angeles - 2019." We also get a look at the RKO Hillstreet, the Warrens and the Paramount. A colorized version of the Hill St. footage is on YouTube. Thanks to Sean Ault for spotting it.

Rick's hour and thirty minute program of wonderful clips from a variety sources was presented at the Los Angeles Public Library by the organization Photo Friends as part of the series L.A. in Focus. Also see an earlier compilation: "Lost Landscapes of Los Angeles - 2016." Both programs are on Vimeo. 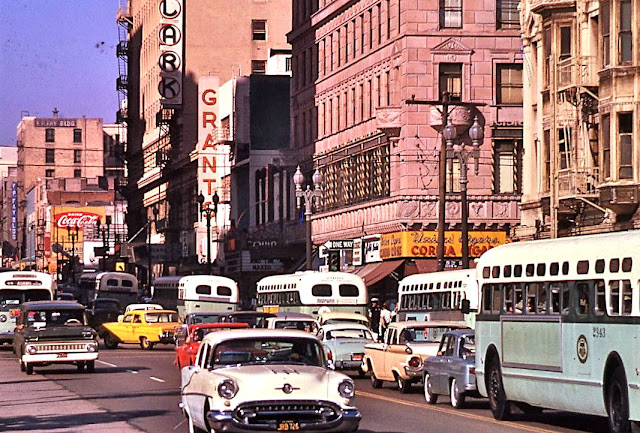 c.1962 - Looking north on Hill St. The Town marquee over in the shadows has a title with the word "Naked" in it. Thanks to Sean Ault for sharing the photo from his collection. Bill Gabel also had it as a post on the Photos of Los Angeles Facebook page. 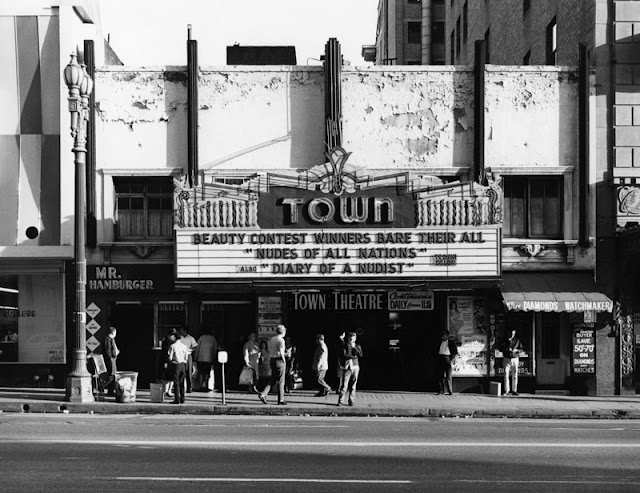 1965 - A photo by William Reagh in the Los Angeles Public Library collection. 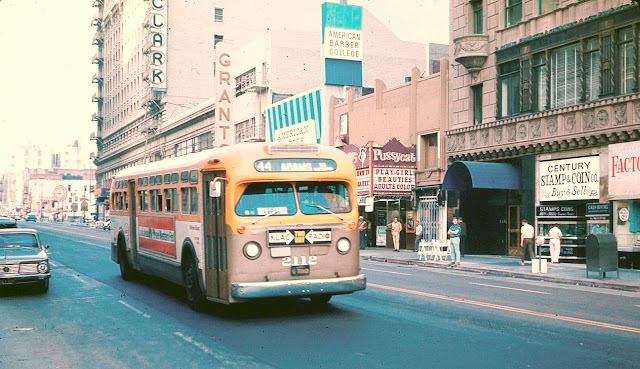 c.1968 - "Playgirl Beauties." At the time of this photo the theatre had been turned into the Pussycat but the older rectangular marquee was still on the building. Thanks to Sean Ault for sharing this photo from his collection. It came to Sean via the collection of Scott Richards. 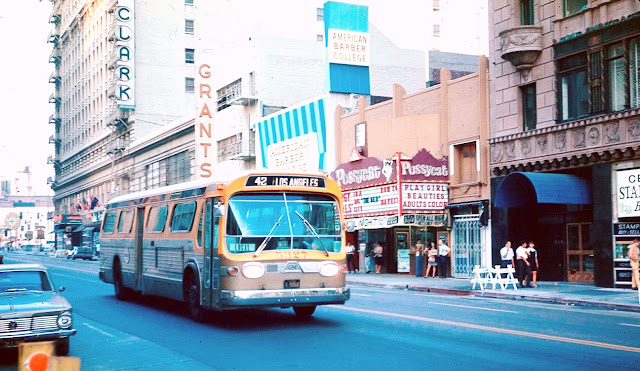 c.1968 - Another view, another bus. And more of the front of the marquee. Thanks again to Sean Ault and Scott Richards. 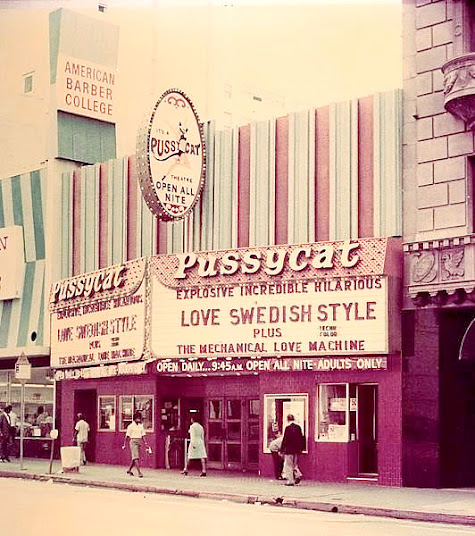 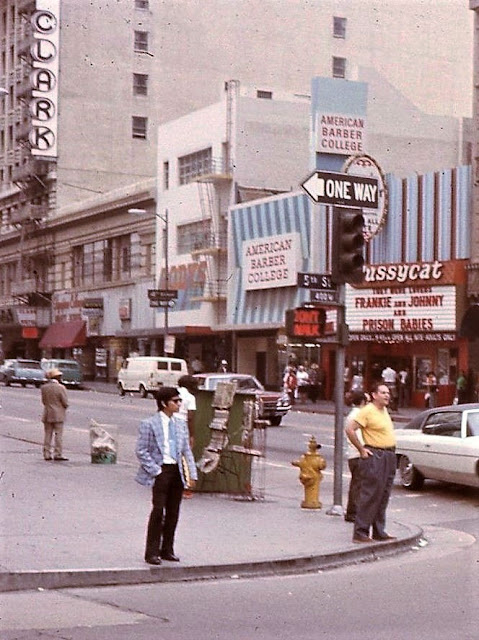 1974 - Looking north from 5th and Hill. Thanks to Sean Ault for finding this one on eBay. 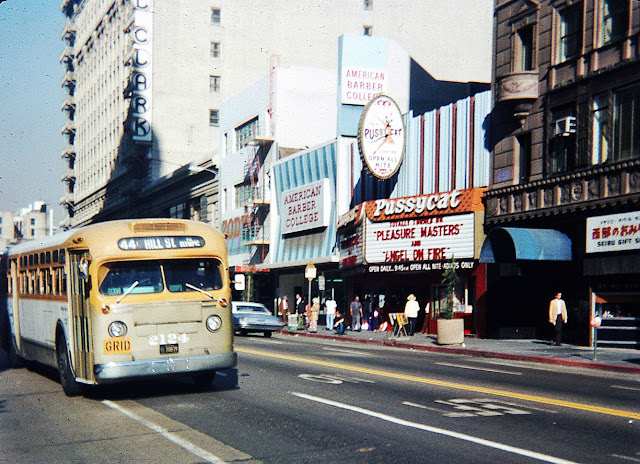 c.1975 - "Pleasure Masters" was a film directed by Alex deRenzy released in December 1974. Thanks to Sean Ault for sharing the photo from his collection. 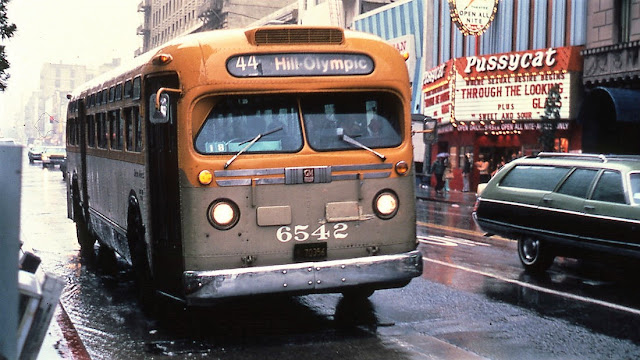 c.1976 - Looking north on Hill. Thanks to transit historian Sean Ault for sharing the photo from his collection. "Through the Looking Glass" was a 1976 release directed by Jonas Middleton featuring Catharine Burgess (aka Erhardt), Jamie Gillis, and Laura Nicholson. 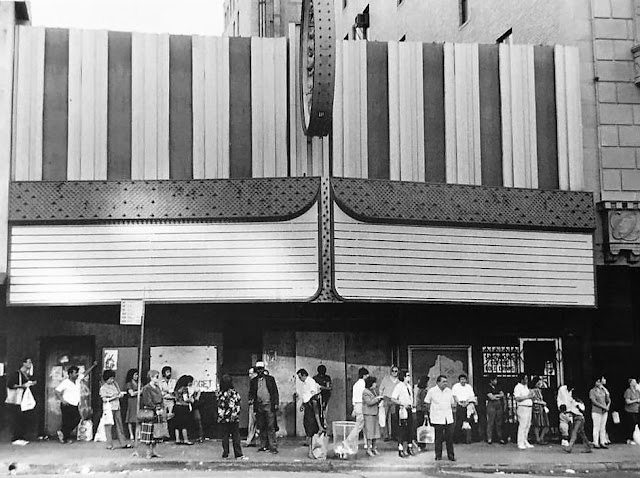 1986 - A photo of the closed theatre taken by Michael Putnam. Thanks to Ken McIntyre for the post on Photos of Los Angeles. 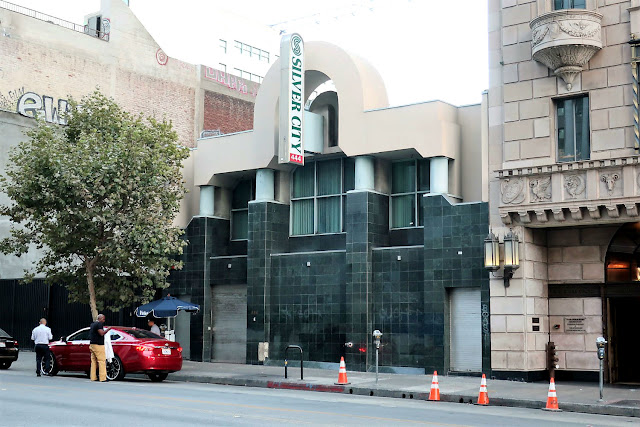 2018 - The building now on the site of the Town Theatre. On the right that's a bit of the Pershing Square Building on the NE corner of 5th and Hill. Photo: Bill Counter

More Information: See the discussion on the Cinema Treasures page devoted to the Town.