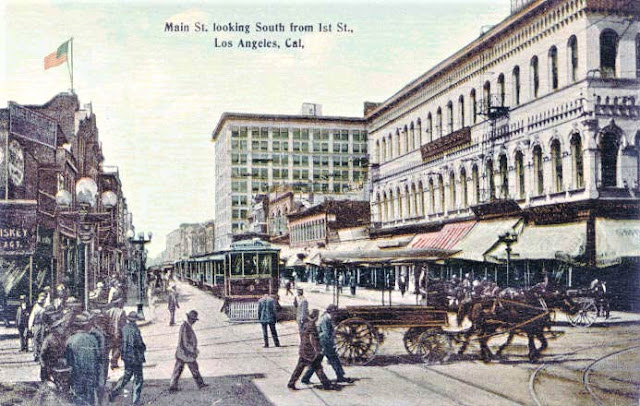 Opened: Mott's Hall was opened in 1886 by Thomas D. Mott on the west side of the street between 1st and 2nd. The address used before street renumbering was 31 S. Main. It was located over Mott's Market and there were reports of customers complaining of smells drifting up from below.

This postcard view looks south from 1st with the Natick House hotel on the corner on the right. Mott's is the building with the three arched windows just behind the front of the streetcar. The Grand Opera House is the building on the left of the card flying the flag. Thanks to Brent Dickerson for including the card in the Main St. Part 1 chapter of his epic "A Visit to Old Los Angeles."

Seating: About 500. It was a flat-floored hall with a stage at one end that could be used for exhibitions and other events as well as theatrical presentations. A shallow balcony wrapped around three sides of the hall. 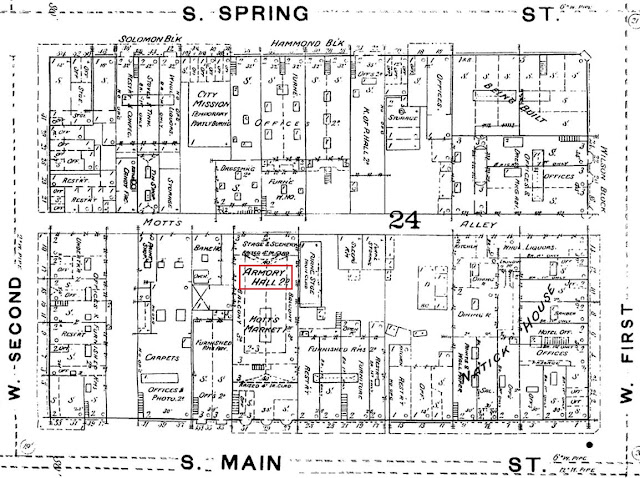 A detail from an 1888 Sanborn map in the Los Angeles Public Library collection showing the second floor space as Armory Hall with the building using 27-29-31 S. Main addresses. 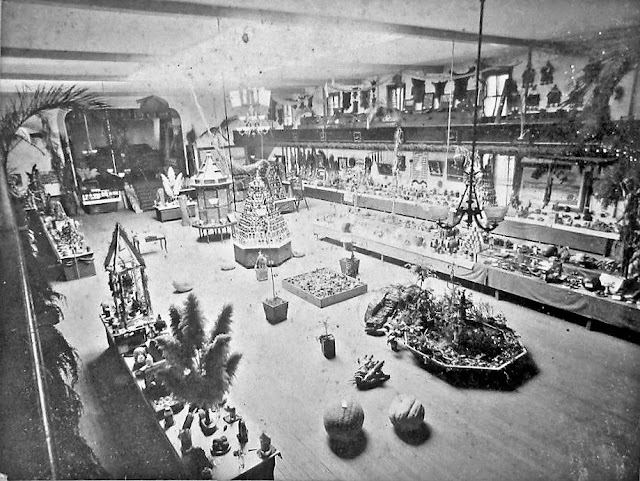 The 1889 Agricultural Fair at Mott's Hall. Note the proscenium on the left of the image and the wrap-around balcony. It's a photo taken by Dewey, 147 S. Main St. Thanks to Noirish Los Angeles contributor Ethereal Reality for spotting the photo on eBay and including it with his Noirish post #46893. In the post he also discusses an earlier Horticultural Hall. For more about the Horticultural Hall see Flying Wedge's Noirish post #46807.

Rented to the Chamber of Commerce: The Chamber took over the space in March 1890 and stayed until 1894. Mott's is discussed beginning on page 87 of Charles Dwight Willard's 1899 book "A History of the Chamber of Commerce of Los Angeles..." The pages are included in the book's preview on Google Books. The book also has several photos of exhibits at the hall. Willard notes that the second floor that was taken over for a rent of $150 a month in addition to the main hall also included a smaller meeting room seating about 100 and offices, store rooms and packing rooms, seven in all. The first big show by the Chamber, also in March, was the Southern California Citrus Fair.
The Chamber of Commerce, founded in 1888, initially was on N. Main St., then at 1st and Fort (Broadway) as well as on Fort between 6th and 7th. After leaving Mott's in 1894 they moved to the Mason Building on the southeast corner of Broadway and 4th. From 1903 until 1925 they were in the Southwest Building at 138 S. Broadway.

An 1894 Sanborn map detail showing the hall's stage and wrap-around balcony. Note the use of the newer addresses 129-131-133. Thanks to Noirish Los Angeles contributor Flying Wedge for including the maps in Noirish post #46903.
Becoming a vaudeville house: In 1894 it got a remodel and became a vaudeville venue called the Imperial Theatre under the management of Jake Gottlob, Martin Lehman and Alfred Ellinghouse. Lehman went on to become part owner of the Orpheum circuit. Gottlob ended up as a noted theatre operator in San Francisco.
This article about the project appeared in the column "The Stage: Gossip in the Wings" in the L.A. Times on September 16, 1894: 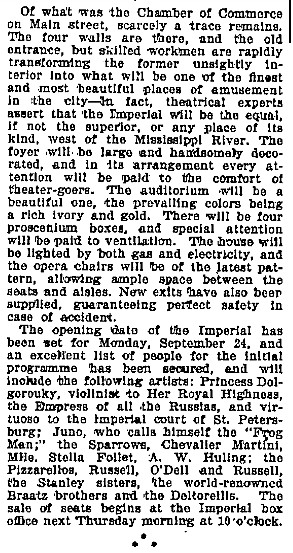 This additional news about the Imperial appeared in "The Stage: Gossip in the Wings" column in the L.A. Times on September 23, 1894. Or, as they called it: the Imperial Music Hall: 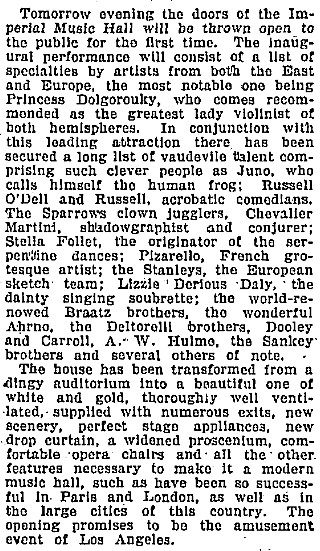 "Imperial - The Society Vaudeville Theater." This was the opening day ad in the Times on September 23, 1894: 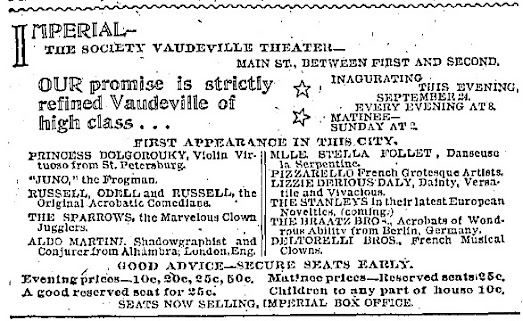 A review of the opening that appeared in the L.A. Times on September 25: 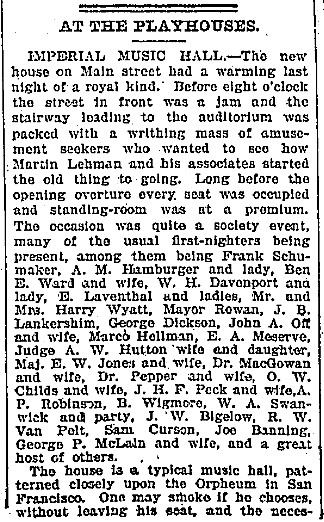 A review of the Imperial's second week program that was in the Times "At the Playhouses" column on October 2: 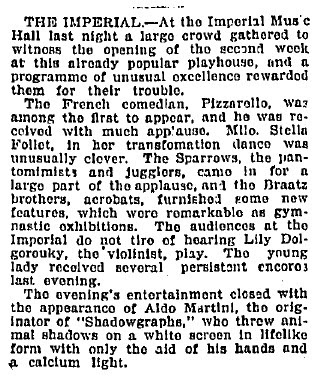 "An Immense Success From The Start." This is the ad that appeared in the Times on October 4, 1894: 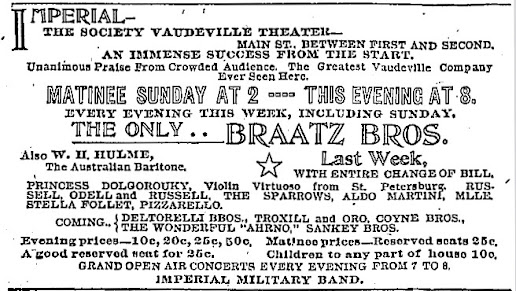 Closing: It was evidently a short run. The Imperial isn't listed in the 1895 or 1896 city directories.
Status: It's unknown what happened to the space immediately following its theatre use. The building was around at least until the mid 1930s but the demolition date is unknown. The Police Department headquarters building is now on the site.
Later use: By 1905 or so the upstairs had become the Hotel Monterey. 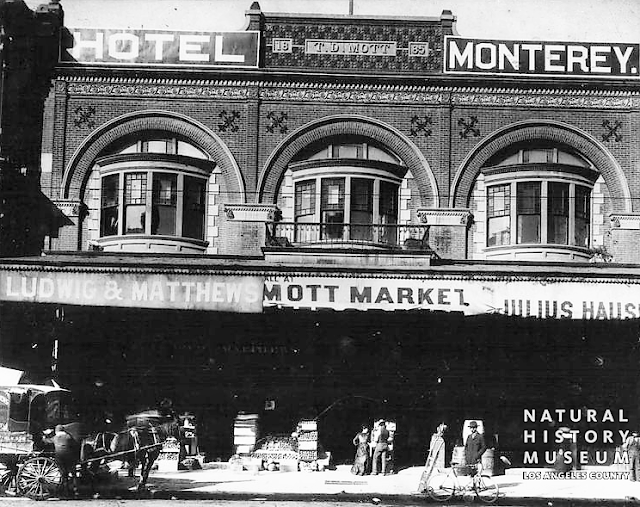 The c.1905 photo is from the collection of the L.A. County Natural History Museum. Thanks to Noirish Los Angeles contributor Flying Wedge for finding it in the collection for his Noirish post #46903. By the time of the photo the hall had been turned into hotel rooms. 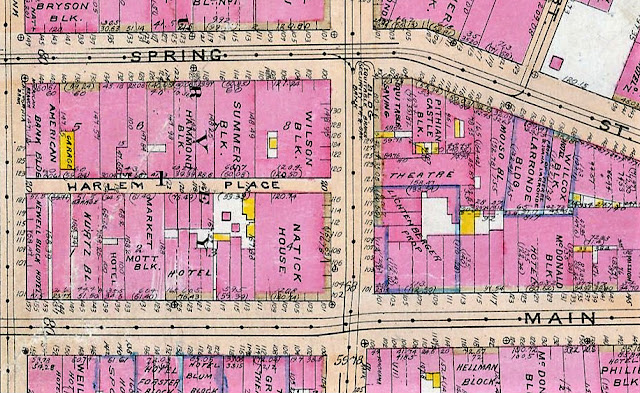 The Mott Block and Market show on this detail from plate 003 of the 1921 Baist Real Estate Survey from Historic Map Works. The theatre in the middle on 1st St. was the Princess. 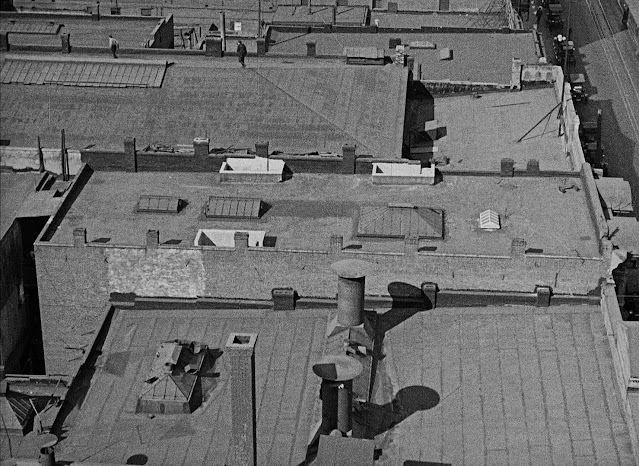 The building in the movies in 1923: The Mott Building is at the top of the frame in this shot from a chase across the roof near the end of Harold Lloyd's "Safety Last!" (Hal Roach Studios / Pathé). Thanks to John Bengtson for the screenshot. His detective work figuring out the location is chronicled in the Silent Locations post "The nearly last - Safety Last - joke."

On the roof are Noah Young, playing a policeman, chasing Bill Strother, who plays Lloyd's brother in the film. The intertitle reads "I'll be right back -- Soon as I ditch this cop." John notes that the camera was on the Higgins Building at the southwest corner of 2nd and Main. See the Historic L.A. Theatres in Movies post about "Safety Last!" for shots of other theatre buildings seen in the film. 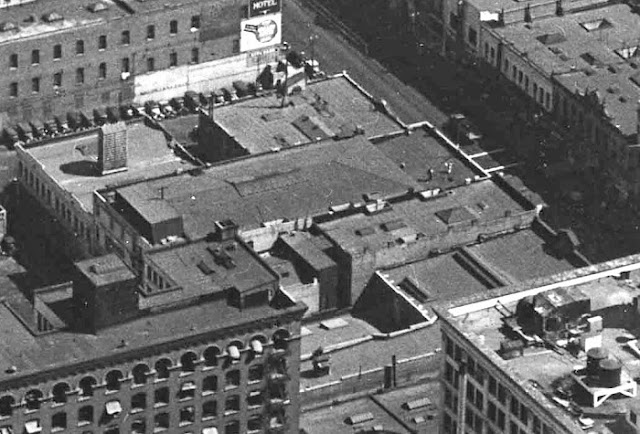 A detail from a 1928 photo in Marc Wanamaker's Bison Archives collection. Center left note the little stagehouse of Mott Hall sticking up at the back of the building. Thanks to John Bengtson for including the image in his Silent Locations post "The nearly last - Safety Last - joke." 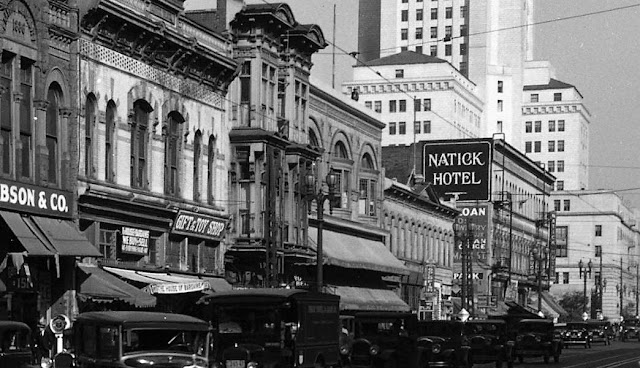 The three arches of the Mott building are in the center of this detail from a c.1935 California Historical Society photo that appears on the USC Digital Library website. We're looking north toward 1st St. That's part of City Hall we see down in the next block. Thanks to John Bengtson for finding the photo in the USC collection. 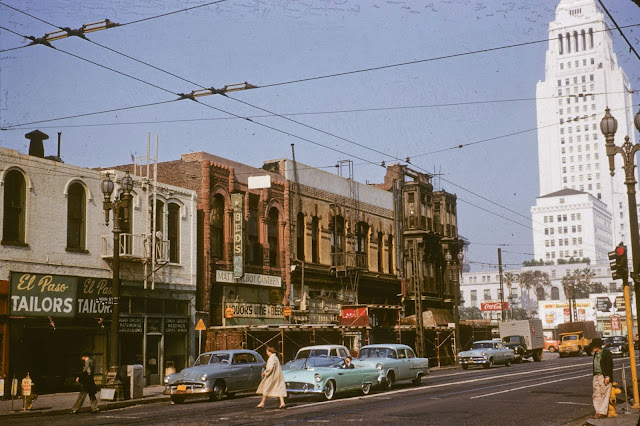 Looking north c.1956. The Mott Building is gone and the buildings this side of where the Mott was are getting dismantled. It's a Palmer Connor photo in the Huntington Library collection. Thanks to John Bengtson for finding the photo. 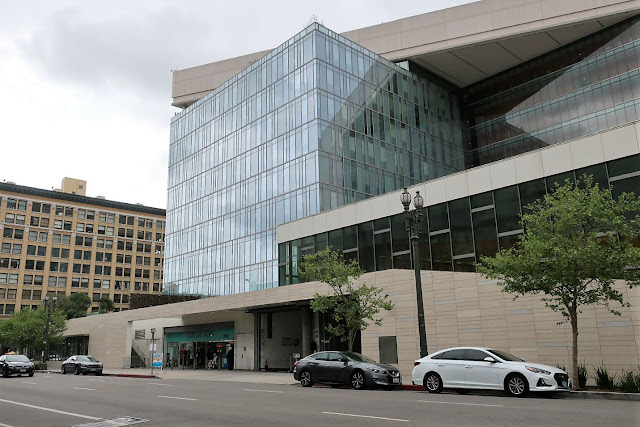 The west side of the 100 block of S. Main where Mott's Hall once was is now occupied by the Los Angeles Police Department headquarters building. On the left that's the Higgins Building at 2nd and Main. Photo: Bill Counter - 2019

More Information: James Miller Guinn's "A History of California..."(1915) has data on early performances at Mott's Hall on page 318. Also see page 360 of "Los Angeles From The Mountains To The Sea" (1921) by John Steven McGroarty.

See also a mention of vaudeville in Mott's in 1895 on p. 215 of "The Businessman in the Amusement World" by Robert Grau. "Sixty Years in Southern California" by Harris Newmark also mentions Mott's.  All these titles are on Google Books.