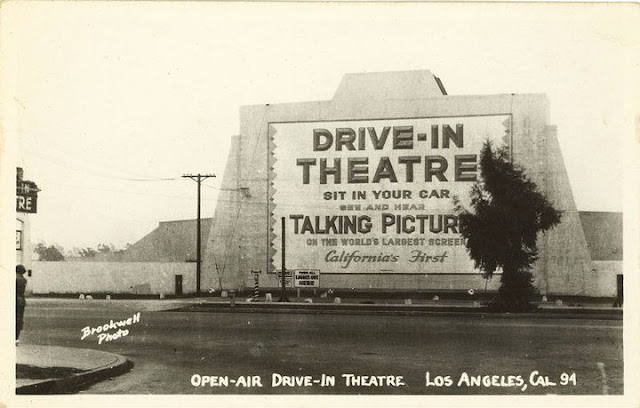 Opened: September 9, 1934 on the south side of Pico at Westwood Blvd. Initially it was just called Drive-In Theatre as it was the only one. Thanks to Michael Snider for this postcard of the screen tower. It was a post on the Mid Century Modern Los Angeles Facebook page. The Huntington Library also has another postcard screen tower view from Brookwell Photo.

It was the first drive-in in California. At the time of the theatre's operation Westwood Blvd. deadended at Pico. It was later cut through farther south. It moved to Olympic Blvd in the 40s and was renamed the Olympic Drive-In.

Architect: The facility was designed by Clifford Balch. Thanks to Joe Vogel for finding a mention of Balch's involvement in the project in the July 27, 1934 issue of Southwest Builder & Contractor. 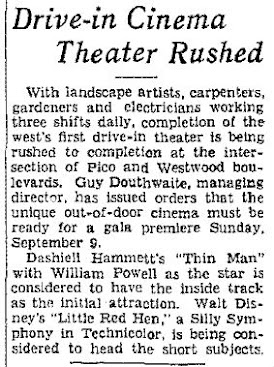 An August 29, 1934 item in the Times about the new theatre. Thanks to Jonathan Weiss for locating the article. 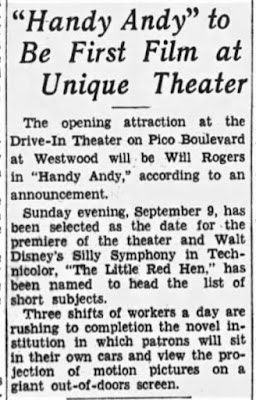 An announcement of the theatre's initial attractions. Thanks to Ken McIntyre for finding the article from the L.A. Times. 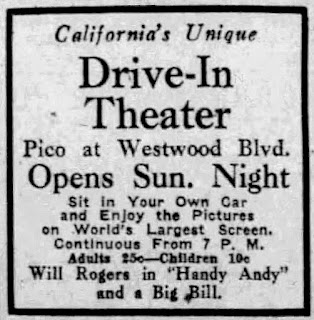 A September 8, 1934 ad appearing in the Venice Vanguard. Thanks to Ken McIntyre for locating this for a thread about the theatre on the Photos of Los Angeles Facebook page. 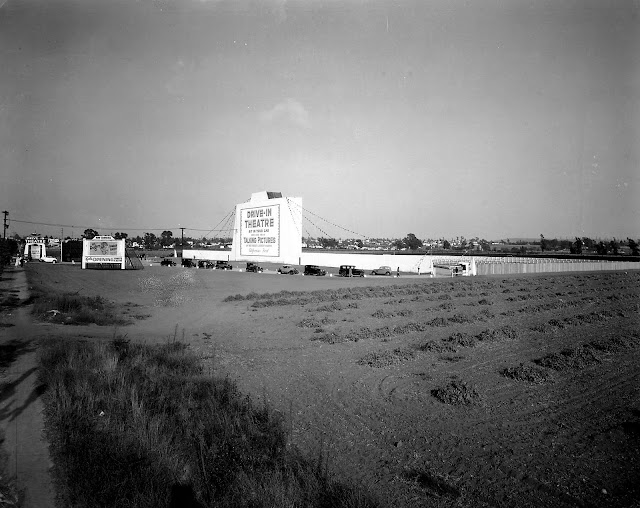 The theatre ready for its opening.  It's a Dick Whittington Studio photo in the Huntington Library collection. 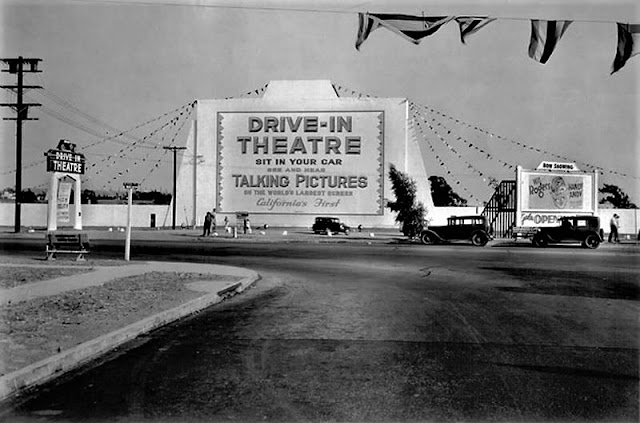 A lovely look toward the screen tower. Thanks to Ken McIntyre for the photo on the Facebook page Photos of Los Angeles.

Cars out on Pico for the opening.  The source of the photo is not known. 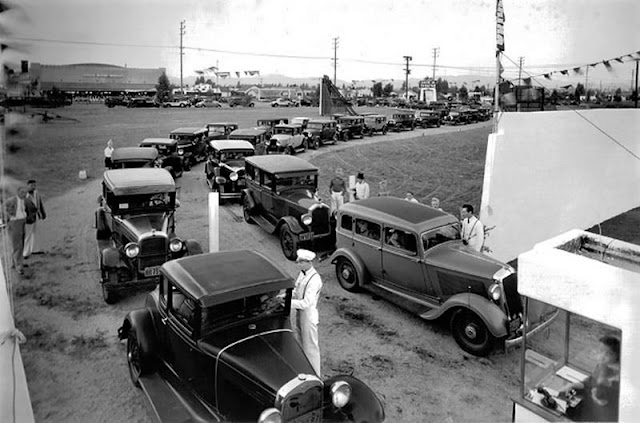 At the ticket booth in 1934. It's a Dick Whittington Studio photo in the Huntington Library collection. 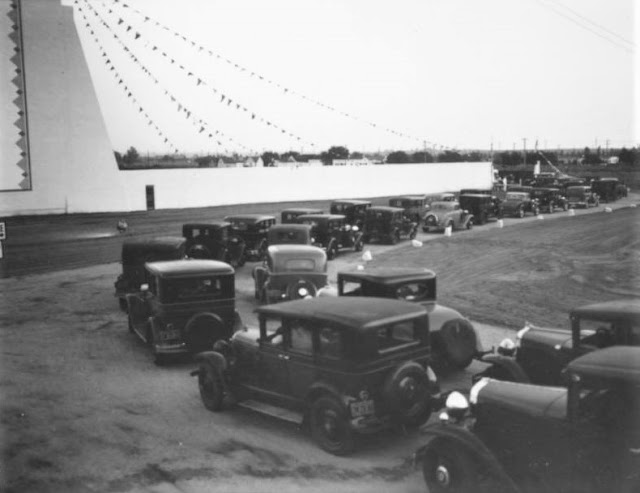 The line to get into the ramp area at the opening. It's a Dick Whittington Studio photo in the USC Digital Library collection.

A 1934 screen view. Note the large speakers at the top of the tower. It's a Dick Whittington Studio photo in the Huntington Library collection. 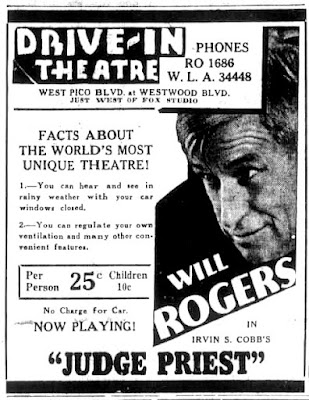 A November 1934 ad for "Judge Priest." Thanks to Ken McIntyre for locating it.

The theatre had complaints about noise as well as picture visibility from the neighbors This article appeared in the June 7, 1935 issue of the Culver City Star-News Shopper. Thanks to Jonathan Weiss for sharing it from a scrapbook that's in his collection. The scrapbook is on his website CheviotHillsHistory.org. 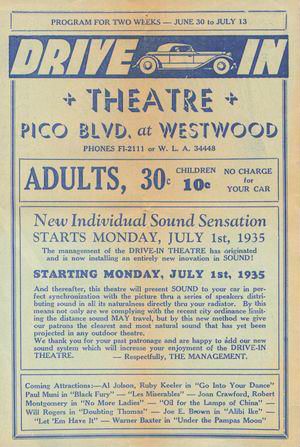 An announcement of an improved sound system in 1935. 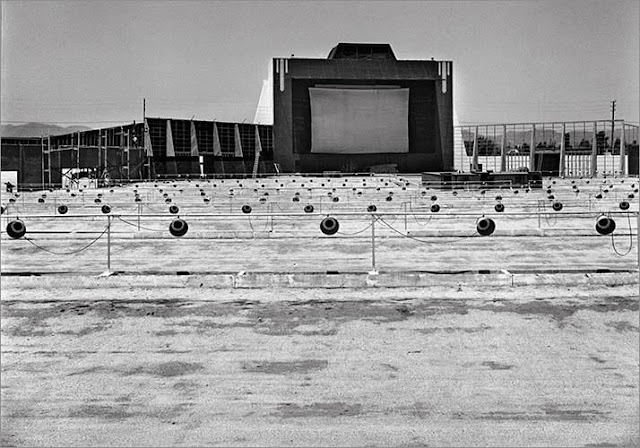 A 1935 view. Note the new speakers. It looks like they're still building the walls adjacent to the screen. The photo source is unknown. 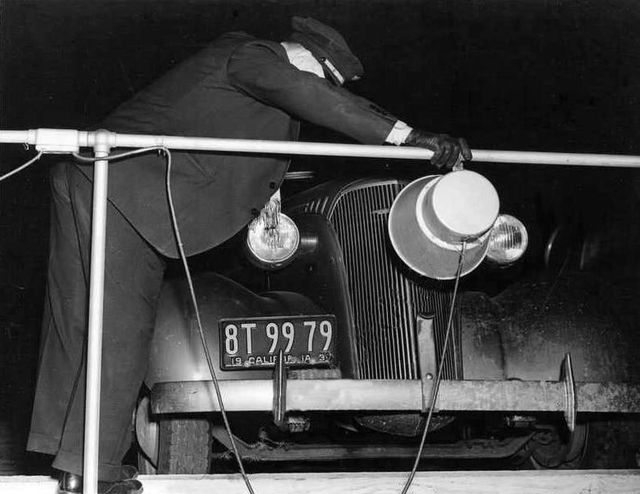 A closer look at one of the new speakers, positioned in front of the car's radiator. Thanks to Cinema Treasures contributor Drive-In 54 for the photo, a post on the site's page about the Pico Drive In. RCA didn't come along with their in-car speakers until the 1940s.
A mention in the Motion Picture Herald issue of February 8, 1936: "Guy Douthwaite, operator of the open-air Drive-in theatre in Hollywood, is applying for patents on horns which he invented when complaints about noise forced him to abandon a loudspeaker. In his invention, sound is carried by wire to each car and is released through horns placed in front of the radiators."  Thanks to Michael Kilgore for finding the item. 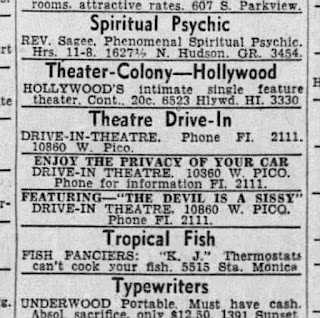 Classified ads in 1937. Thanks to Ken McIntyre for spotting these.

Forgot your matches? Ken McIntyre found these for you. 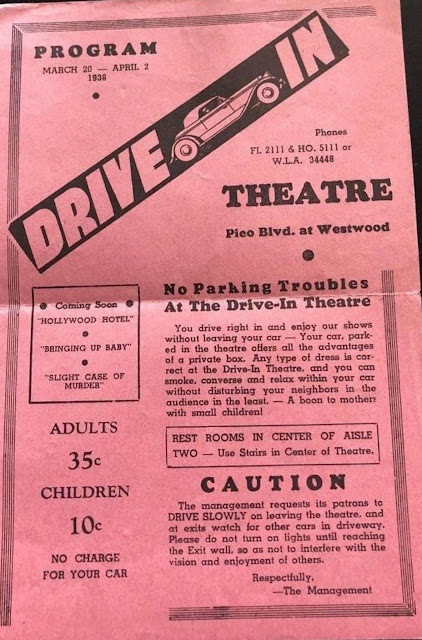 A flyer from March 1938. Thanks to Ken McIntyre for locating this for a thread about the theatre on the Photos of Los Angeles Facebook page. 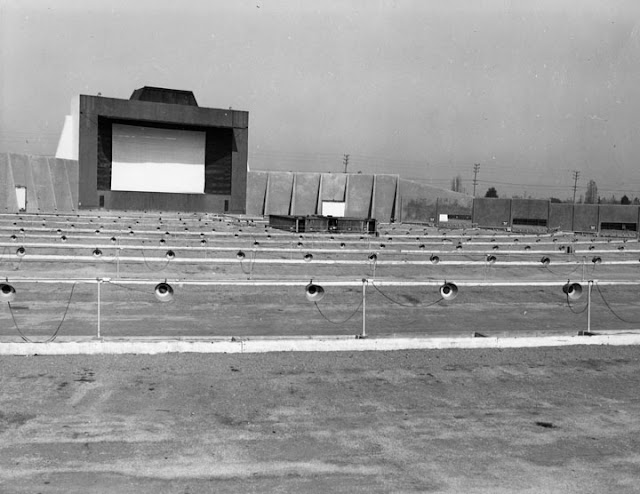 A 1938 screen view. It's a Los Angeles Public Library photo.  There's a similar view from the California Historical Society on the USC Digital Library website. 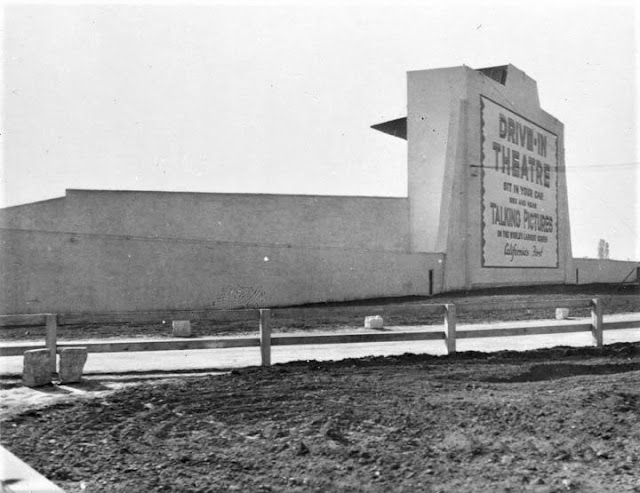 A 1938 look at the side of the screen tower. It's a photo in the Los Angeles Public Library collection. 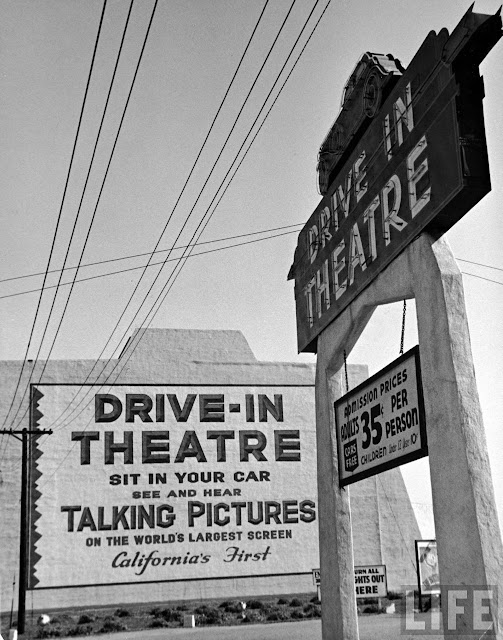 A 1938 photo by Peter Stackpole for Life. Thanks to Jonathan Weiss for finding it in the Life Photo Archive hosted by Google. 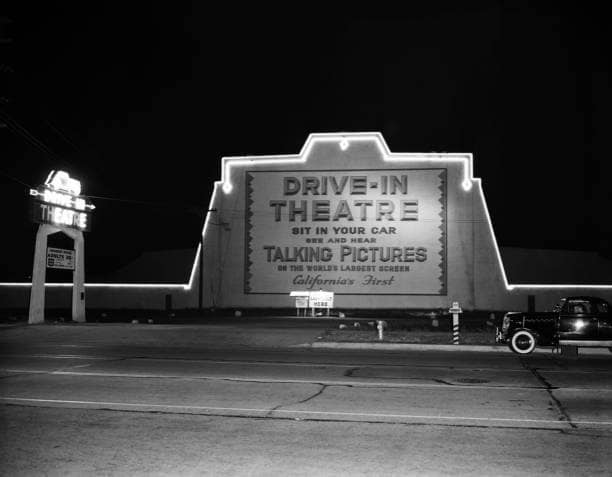 A fine look at the screen tower with added neon. Thanks to Ken McIntyre for locating this undated photo for a Facebook post on Ken's Movie Page. 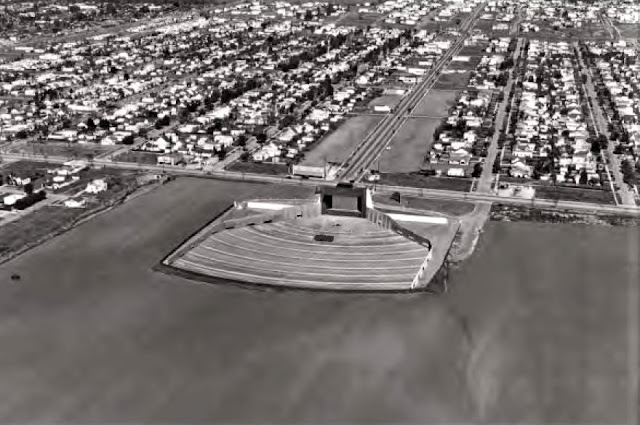 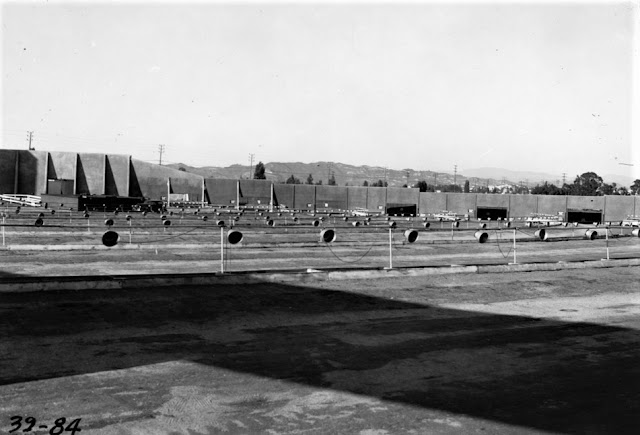 A 1939 photo looking to the right of the screen. It's from an engineering notebook in the Automobile Club of Southern California collection that appears on the USC Digital Library website. Thanks to Jonathan Weiss for finding the photo on the USC site. 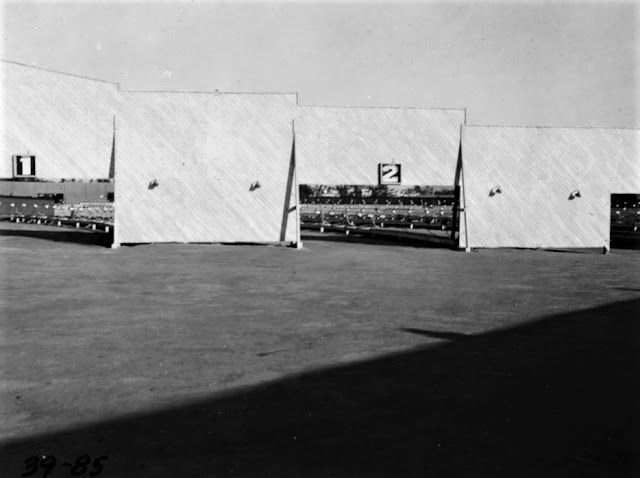 A curious 1939 view from an engineering notebook in the Automobile Club of Southern California collection that appears on the USC Digital Library website. Presumably the screen tower is off to the right. It's unknown what the wooden walls and the numbers were all about. Perhaps they were trying to block picture or sound from adjacent houses. Thanks to Jonathan Weiss for finding the photo on the USC site.

Closing: It closed October 1, 1944 with Fred MacMurray in “Double Indemnity” and James Mason in “Candlelight in Algeria” as the final films, according to data from Cinema Treasures contributor Michael Kilgore. He notes that the October 2 Times ad said "Closed. Watch for Opening Date." 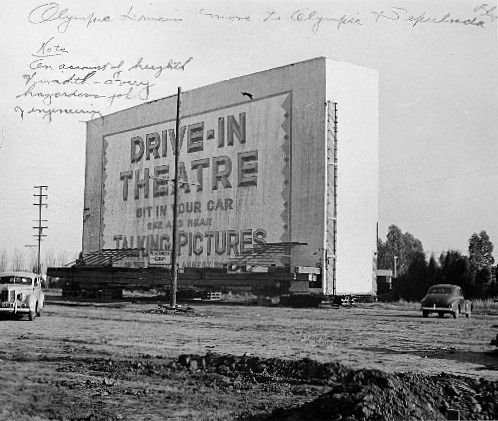 Moving day for the screen tower in 1947. It ended up at Olympic and Bundy and was renamed the Olympic Drive-In. Thanks to Bill Gabel for finding the photo for a post on the Photos of Los Angeles Facebook page.


Status: Other development, including the Picwood Theatre, rose on the site. Later it became the location of the the Westside Pavilion shopping mall with the Westside Pavilion Cinemas and, later, the Landmark Theatres. The mall started winding down in 2018 and the shopping areas has become a tech office campus called Westside One.

More information: See the Cinema Treasures page on the Pico Drive-In. Here on this site visit the page about the Olympic Drive-In.

See Steve Harvey's amusing 2011 L.A. Times article "Drive-Ins roared into L.A. County, but only one remains." Thanks to Jonathan Weiss for spotting the article.

The Pico shows up as #4 on a list of early drive-ins from the site DriveInTheater.com. #1 was a venue in Camden, New Jersey that opened in June 1933.  Life has a fine collection of drive-in shots in their article "Let's Go to the Drive-In Movies!"