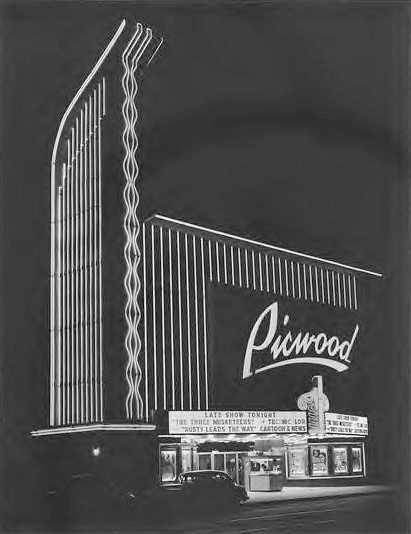 Opened: December 25, 1948 with a second-run engagement of "The Three Musketeers" starring Gene Kelly along with "Rusty Leads the Way." The theatre was on the south side of the street just west of Westwood Blvd. This photo by Michael Greene with the opening attractions on the marquee is on Calisphere from the UCLA S. Charles Lee Papers Collection. 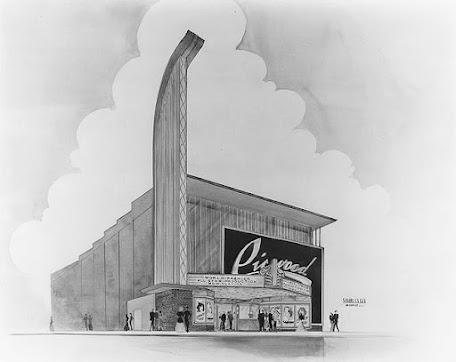 A facade rendering by Mr. Lee. It's on Calisphere from the the UCLA S. Charles Lee Papers Collection.

A sketch of the boxoffice. It's on Calisphere from the the UCLA collection. 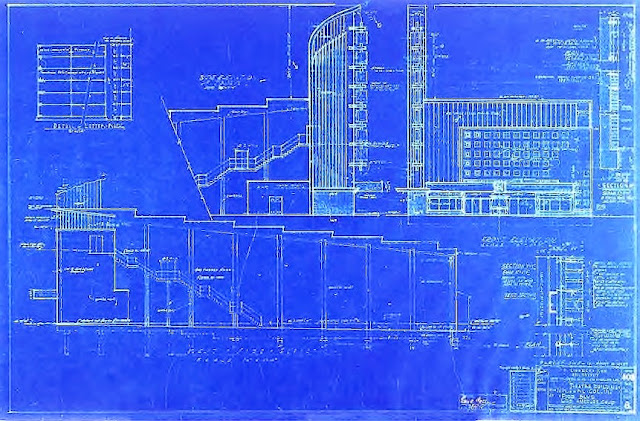 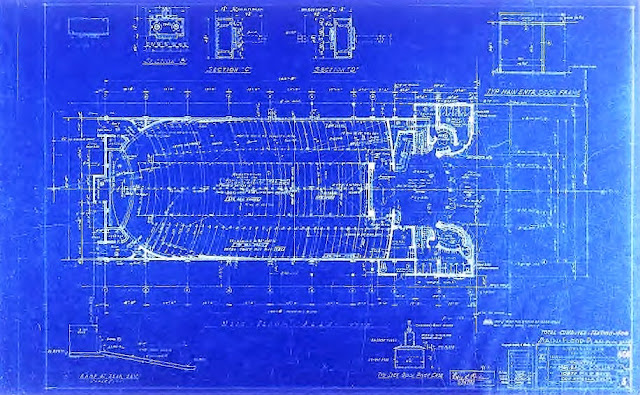 A floorplan. It's on Calisphere. There's a simpler version of the floorplan on the Picwood Cinema Tour page that had appeared in the publication Theatre Catalog.

It was an independent operation at first. The L.A. Times noted on November 7, 1948: "Opening soon of the new Picwood theater at Pico and Westwood Blvd. has been announced. The new structure has 1,500 seating capacity, 1,000 on the first floor. The theater is owned by Earl Collins and will be managed by Phil Isley, of Dallas."

A December 31, 1948 article in the West LA Independent noted that the owners had intended to open the theatre with a first run film but nothing was made available to them. They filed a lawsuit against several studios and exhibitors. MGM had advised that they could bid against the Fox Wilshire for product but they had no hopes of succeeding in competition against Fox West Coast. See part of the article reproduced at the bottom of the page.

It got a remodel in 1966 that obliterated most of the original tropical themed decor. Pacific Theatres draped the whole thing -- including a curtain across the front of the booth to hide those unsightly portholes during intermission.


Status: Demolished in 1985 to make way for the Westside Pavilions Mall.

The Picwood in the Movies: 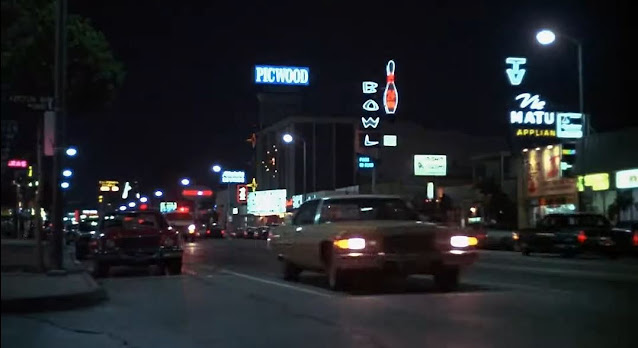 We get a lovely view east toward the theatre in this shot from "Young Doctors in Love" (20th Century Fox, 1982). The film was directed by Garry Marshall and stars Michael McKean and Sean Young. The cinematography was by Don Peterman. Thanks to Eric Schaefer for spotting the theatre in the film and getting the screenshot. 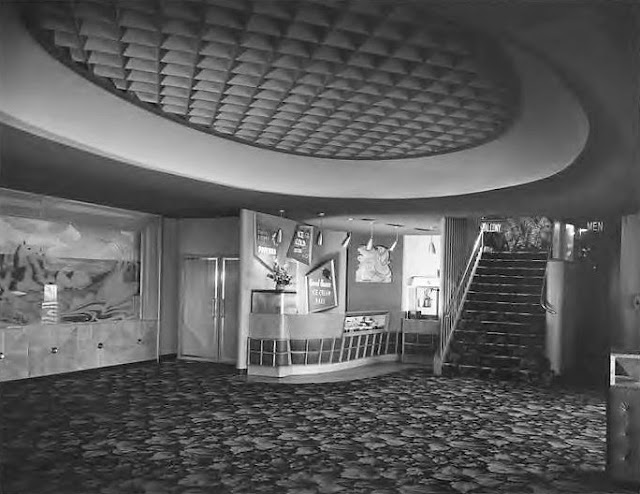 A look at the lobby of the Picwood. It's a 1948 Julius Shulman photo on Calisphere from the UCLA S. Charles Lee Papers Collection. 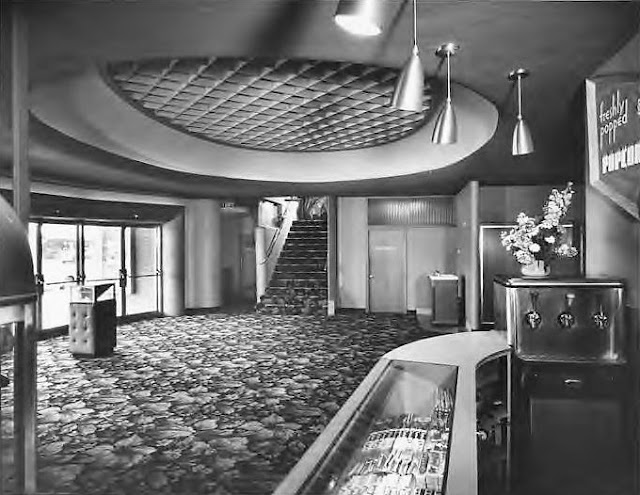 The view toward the exit doors. It's a Julius Shulman photo on Calisphere from the UCLA S. Charles Lee Papers Collection. 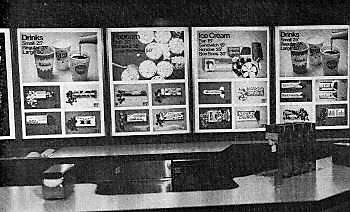 A later photo of the Picwood snack bar that appeared in the Motion Picture Herald. It appears on the Picwood Theatre page in the 70mm in Los Angeles section of the site From Script To DVD. 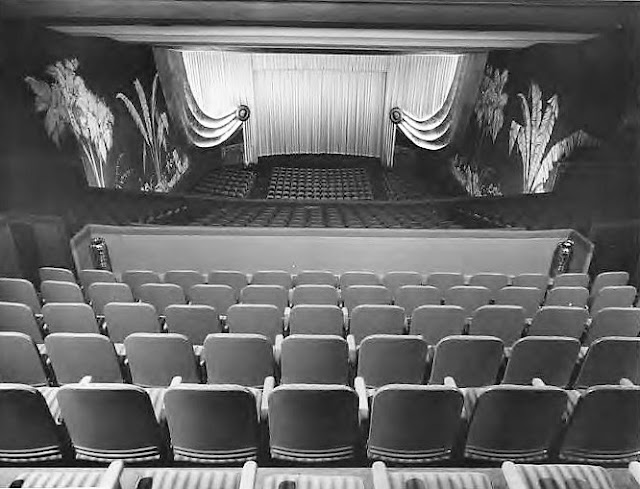 A look down from the top. The 1948 photo is on Calisphere from the UCLA S. Charles Lee Papers Collection. No photographer is credited. An uncredited photo of the rear of the house. It's on Calisphere from the UCLA S. Charles Lee Papers Collection. 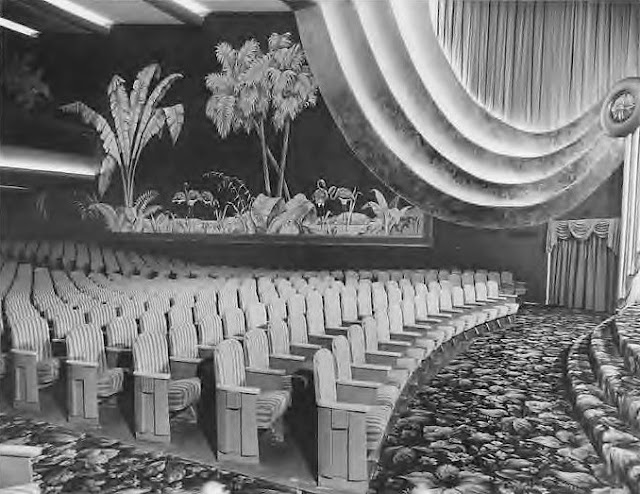 A chance to check out that tropical sidewall decor. The 1948 photo is on Calisphere from the UCLA S. Charles Lee Papers Collection. The photographer is not credited. 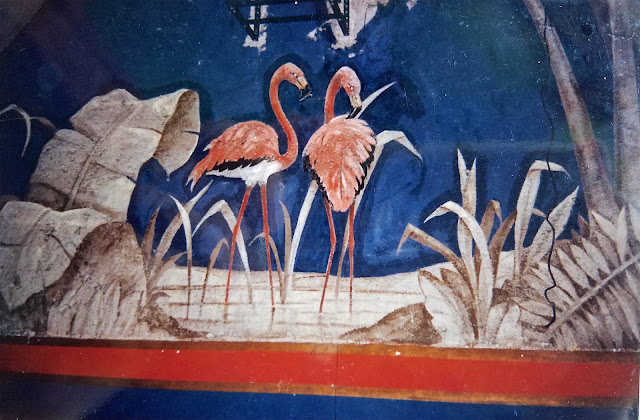 A detail of those flamingos on the side wall. Thanks to Matt Spero for the photo. He comments: "This was taken shortly before teardown. They had ripped down the drapes that covered the original S. Charles Lee wall art for many years. Notice the bracket for surround speakers. I only had a few shots left to this roll and this was the best interior shot I got." 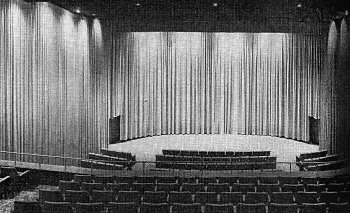 A view of the draped auditorium of the Picwood in its later years. The photo is credited to the L.A. Times / Lucasfilm / Pacific Theatres. It appears on the Picwood Theatre page in the "70mm in Los Angeles" section of the site From Script To DVD. 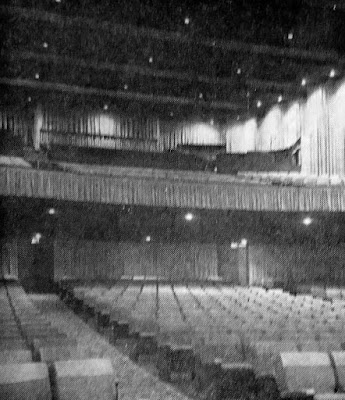 Thanks to Bill Gabel for this view to the rear in the theatre's later "draped" days. Note the booth is obscured by its own motorized curtain that would be closed during intermissions. Bill has the photo on the Cinema Treasures page about the Picwood. 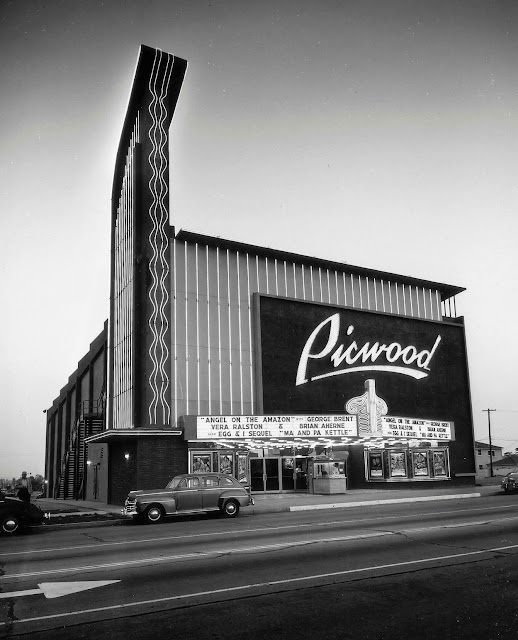 A 1949 view of the theatre by Julius Shulman in the Getty Research Institute collection. The main feature the week of the photo was "Angel on the Amazon," a November 1948 release. The Getty indexes this as Shulman job #474: Picwood Theatre.

An entrance detail from the Shulman photo above. 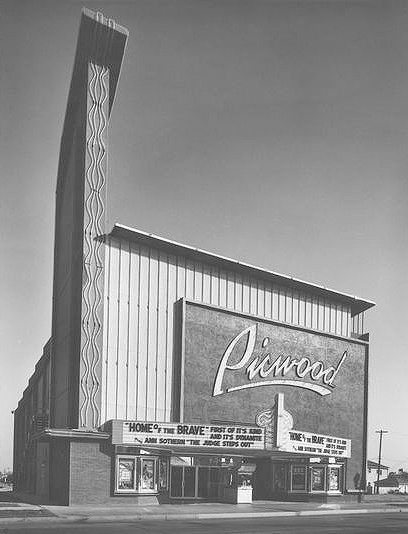 A 1949 photo by Alpheus A. Blakeslee with the theatre playing "Home of the Brave." It's on Calisphere from the the UCLA collection. 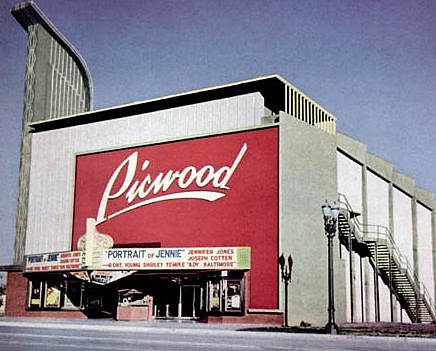 The Cinema Tour page on the Picwood includes this colorful exterior shot from Jay Emmanuel Publishing's 1949-1950 "Theatre Catalog." They're running "Portrait of Jennie," an April 1949 release with Jennifer Jones and Joseph Cotton. 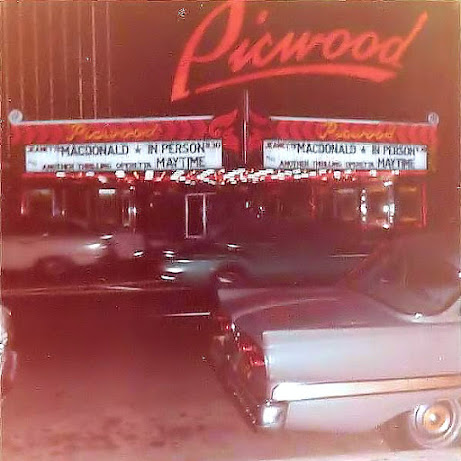 Jeanette MacDonald made an appearance in 1963 along with a screening of "Maytime." Thanks to Maggie McCormick for posting this shot by an unknown photographer on the non-public Facebook group Metro's Stars Jeanette and Nelson. And thanks to Claudia Mullins for spotting the post. 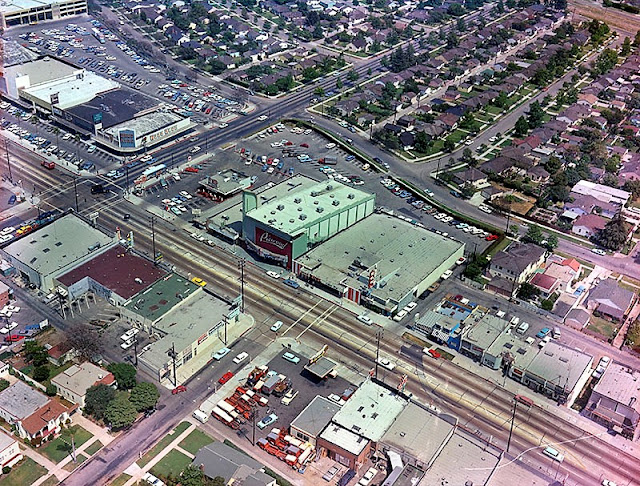 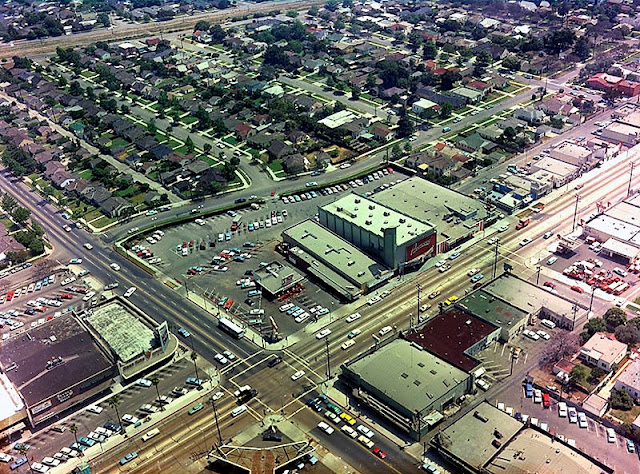 Another 1965 photo by Mr. Kelly from the Los Angeles Public Library. 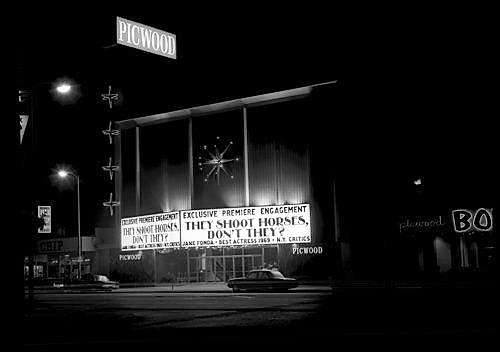 A 1969 view of the Picwood during the exclusive engagement of "They Shoot Horses, Don't They?" Thanks to Michael Snider for the photo on the non-public Facebook group Mid Century Modern Los Angeles. 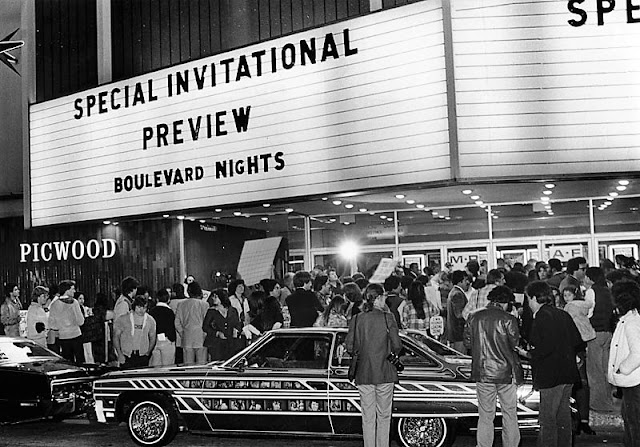 "The barrio is real - not glamorous." It's 1979 photo of the Picwood for the premiere of "Boulevard Nights"-- and a protest. It's a Dean Musgrove photo in the Herald Examiner collection at the Los Angeles Public Library. Also in the collection: another "Boulevard" view | yet another "Boulevard" shot  - "Stop Gang Exploitation Films" 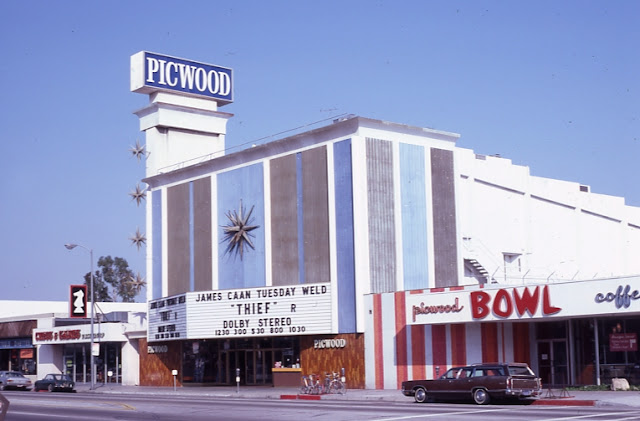 A 1981 photo from the now-vanished website American Classic Images. 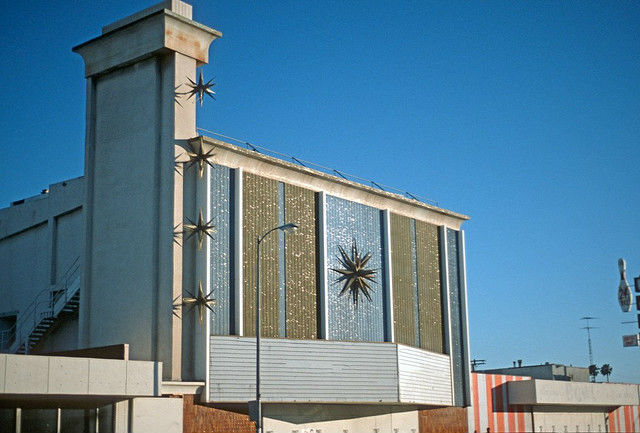 A view of the boarded up facade of the Picwood by Mark Van Slyke. It's in his Mid-Century Modern set on Flickr. 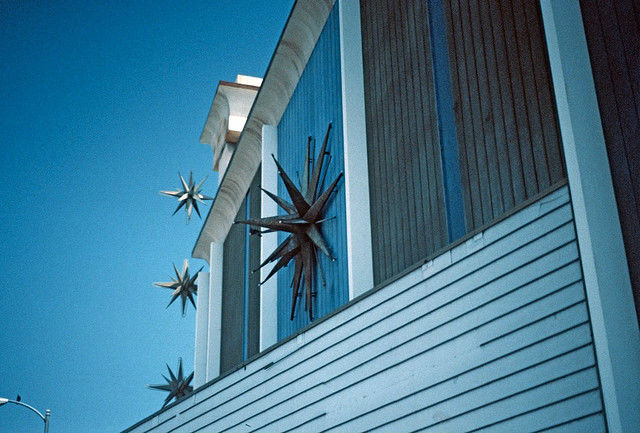 Thanks to Mark Van Slyke for this facade detail from his Mid-Century Modern set on Flickr. 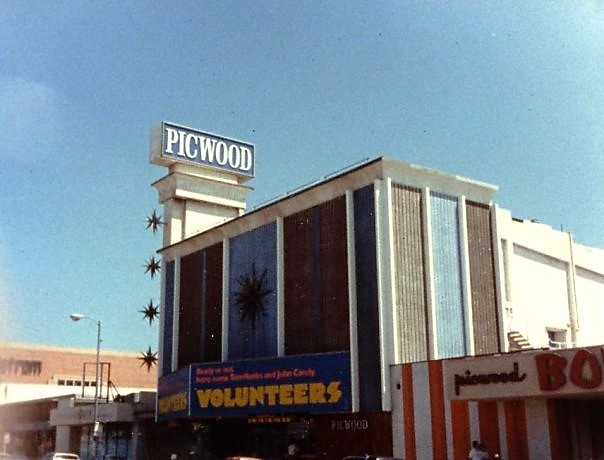 "We Killed a Theatre AND a Bowling Alley," Ken Levine's 2008 blog post, included this photo of the theatre's last engagement, "Volunteers," in 1985. 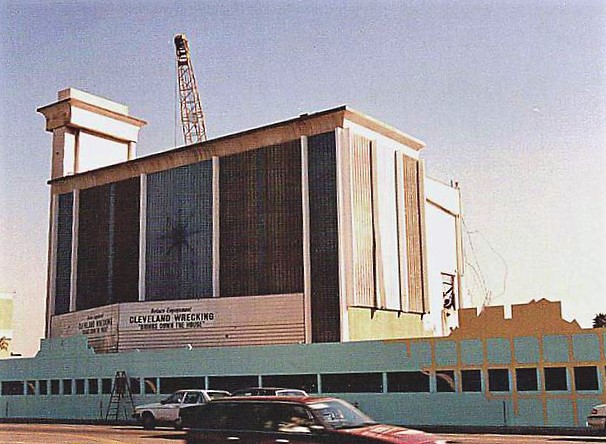 "Cleveland Wrecking Co. Brings Down the House." A look at the Picwood with its fate left in the hands of the demolition company. Thanks to Ken McIntyre for the post on the Facebook page Photos of Los Angeles.

More information: See the Cinema Treasures page for lots of discussion about the Picwood's history. Michael Coate posted a list of the Picwood's 70mm runs in 2008.

Also see the Cinema Tour page on the Picwood for a few more photos. The theatre was pictured on the cover of the May 7, 1949 issue of Boxoffice. The Picwood Theatre page in the "70mm in Los Angeles" section of the site From Script To DVD has a number of photos.

Thanks to Ken McIntyre for locating this portion of an article from the December 31, 1948 issue of the West LA Independent for a thread about the theatre on the Photos of Los Angeles Facebook page.