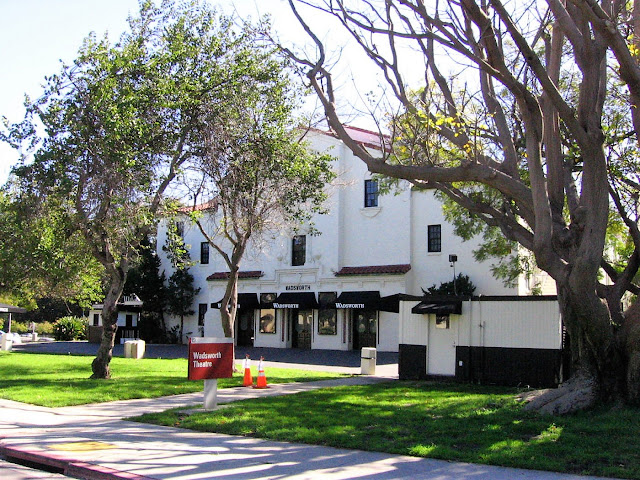 Opened: 1939. The Wadsworth Theatre was initially built for both film and live entertainment for servicemen. Photo: Bill Counter - 2010

The theatre was one of a number of construction projects on the VA campus reported in a January 1940 story in the L.A. Times, according to research by Ron Pierce for the Cinema Treasures page about the theatre. He notes that it wasn't until 1976 that it got the Wadsworth name, an homage to Civil War officer and disabled veterans advocate Maj. James W. Wadsworth.

UCLA Performing Arts managed the theatre from 1983 through 1998. Ron notes some film events of interest:

"Highlights of its film activity include a May 1983 presentation of the 1928 classic film 'The Passion of Joan of Arc,' backed up by a 30-piece orchestra. Continuing into the 1980s was a June 11, 1984 Esther Williams retrospective sponsored by the UCLA Film Archives, and a December 7, 1985 Dan Akroyd and Chevy Chase appearance for a benefit screening of 'Spies Like Us.' In May 2000 Woody Allen made a rare public appearance when he screened his new film 'Small Time Crooks.'"

It saw extensive use with a great variety of live programming by UCLA between 1994 and 1998 when Royce Hall was out of commission due to earthquake damage. During UCLA's tenure a F.O.H. lighting truss and new dimming system were installed. Other work by UCLA included a new sound system, an air conditioning installation, ADA upgrades, and a new loading area.

Beginning in 1998, the VA decided it wanted to manage the facility itself.  In 2002 it had a thorough renovation. Later the management was turned over to Richmark Entertainment, who then also had the Brentwood Theatre on the VA grounds. It was being used for legit theatre, concerts and special events totaling about 100 a year. The company seems to have have vanished around 2012.

Stage specifications: The proscenium is 35' wide and 22' 2" high. Stage depth is 22' 2" from curtain line to the back wall. There's a thrust with curtain line to the stage lip 12'. There's no orchestra pit. Wall to wall it's 63' 6" from the pinrail stage right to the wall stage left. It's a steel grid with a height of 36'.

The rigging is mostly hemp with 16 sets rigged plus 4 counterweighted sets and two electrics on chain motors. There are two dressing rooms and a shower off left at stage level plus a chorus room in the basement and another on the 2nd floor.

The data comes from a c.1985 tech packet prepared by UCLA. It's reproduced at the bottom of the page, appearing courtesy of Ronald W. Mahan.

Status: The theatre's moderne interior is in pristine condition but the venue seems to be in a dormant period. Nobody at the VA seems interested in commenting on the house's current status or any future plans. The Wadsworth and Brentwood Theatres are among those included in the Los Angeles Historic Theatre Foundation report "L.A. Theatres at Risk 2021." It's available on YouTube.

The Wadsworth in the movies: We see a lot of the theatre in Al Pacino's film "Wilde Salomé" (Stonelock Pictures/Quiver). A version of the film premiered at the Venice Film Festival in 2011 but there wasn't a U.S. release until 2017. It's a documentary featuring Pacino, Jessica Chastain, Estelle Parsons, Kevin Anderson and Roxanne Hart that chronicles a production of Oscar Wilde's play at the Wadsworth. The film also follows the making of Pacino's companion film of the play itself, called "Salomé" (2013). 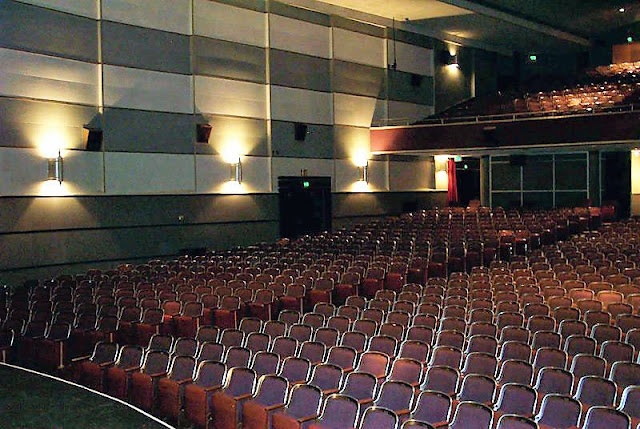 Thanks to Dave PD for this 2003 sidewall photo appearing on the Facebook page Photos of Los Angeles. 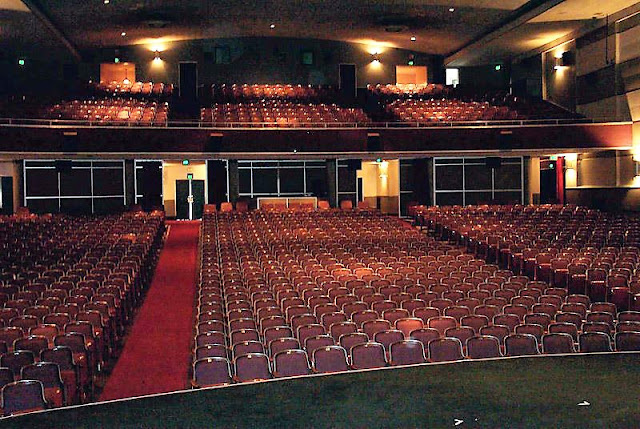 A panoramic look toward the rear of the house that once appeared on the website Experience LA. The site seems to have morphed into something called Discover Los Angeles. 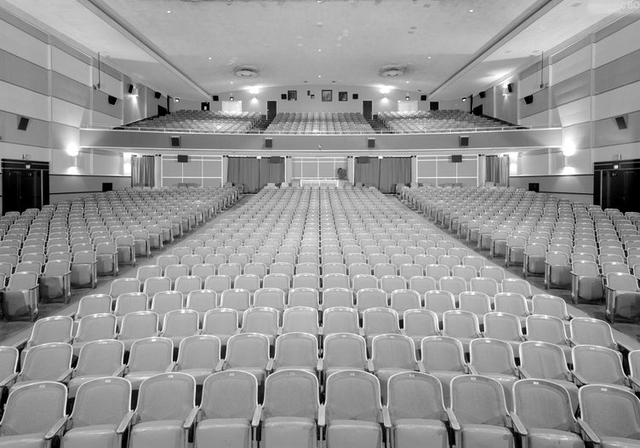 Another look to the rear. Thanks to Kinospoter for locating the photo for a post on Cinema Treasures. 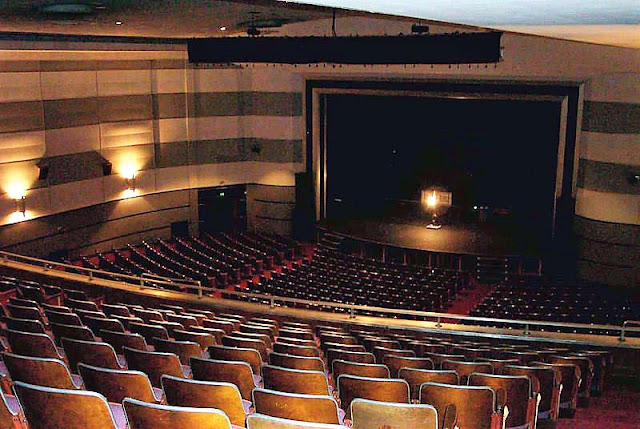 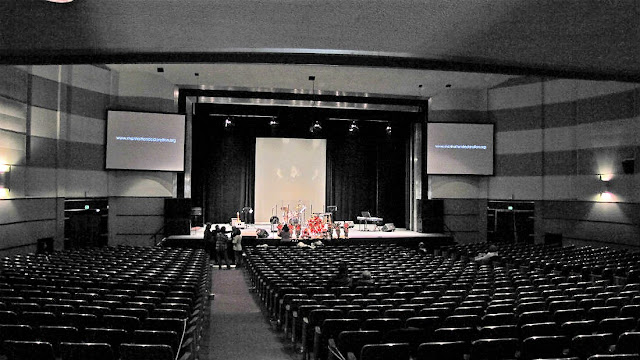 The stage from the main floor. Thanks to Don Solosan of the Los Angeles Historic Theatre Foundation for his photo.


The LAHTF is actively involved in the study and preservation of the vintage theatres in the L.A. area. The group frequently supports events and offers tours of various historic theatres. www.lahtf.org | LAHTF on Facebook

A stage view that appeared on the defunct website Experience LA. The site is now called Discover Los Angeles. 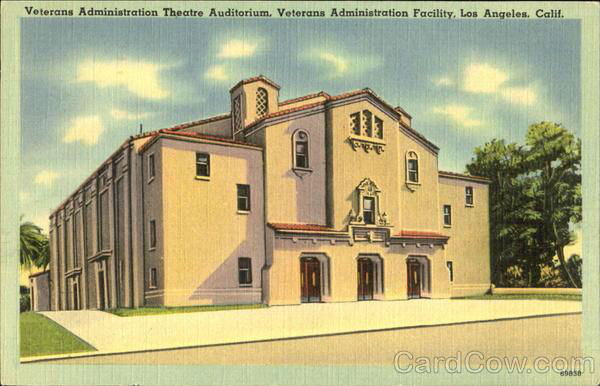 A vintage postcard of the theatre from the site Card Cow. 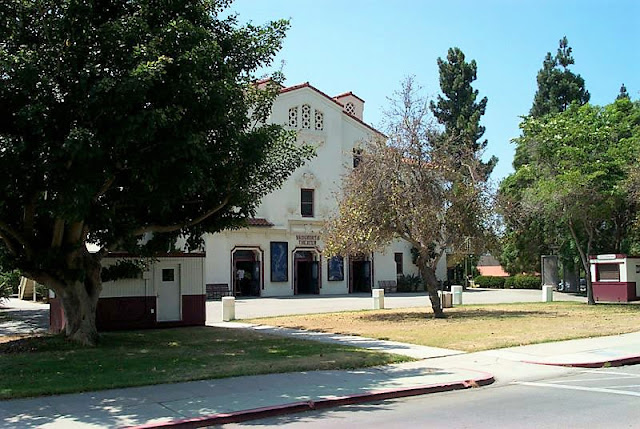 The facade of the Wadsworth, a 2003 photo from from Dave PD on the Facebook page Photos of Los Angeles. 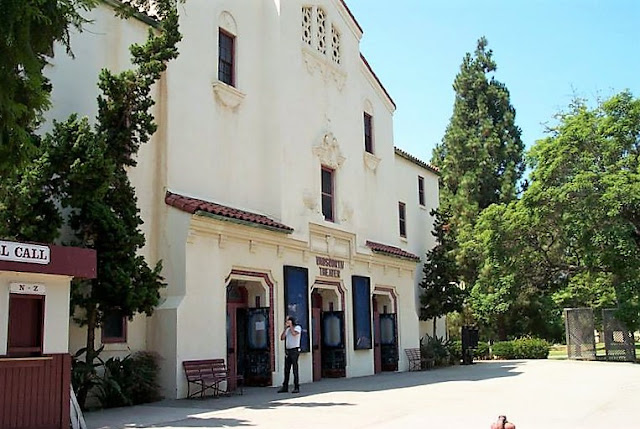 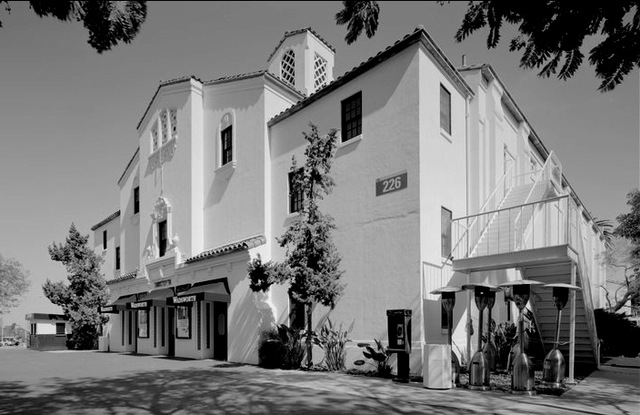 A shot of unknown vintage located by Kintspoter for a post on Cinema Treasures. 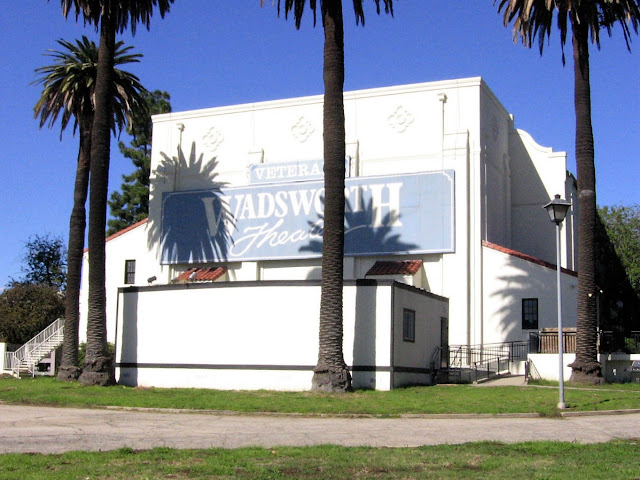 The stagehouse of the Wadsworth Theatre as seen from Wilshire Blvd. Photo: Bill Counter - 2010

The stagehouse in 2017. Photo: Google Maps

The facade as seen from Eisenhower Dr. in 2019. Photo: Google Maps

The house left side of the building in 2019. Wilshire Blvd. is off to the left. Photo: Google Maps


The UCLA Tech information packet for the theatre, c. 1985. The document is from the Ronald W. Mahan collection. 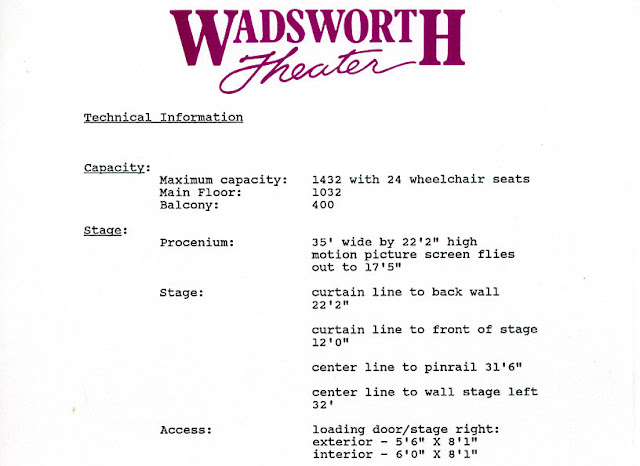 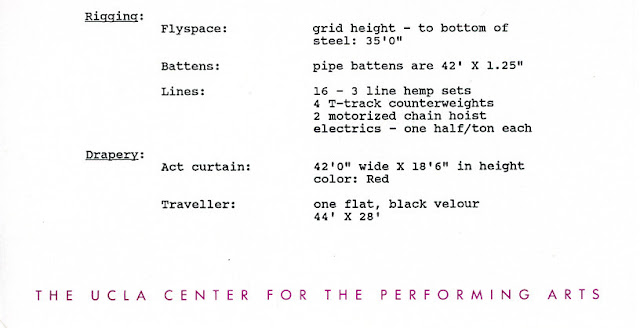 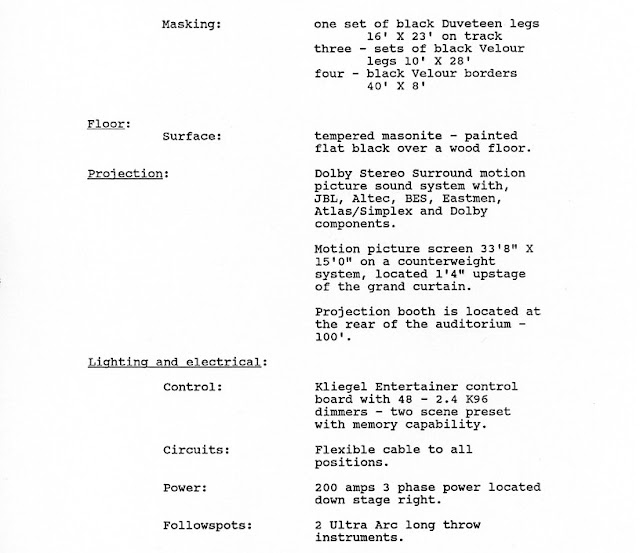 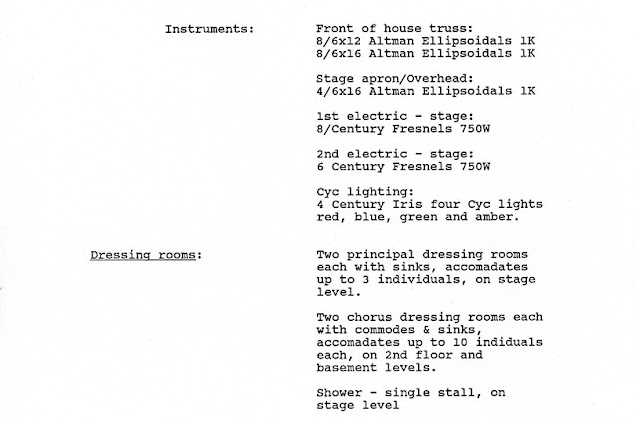 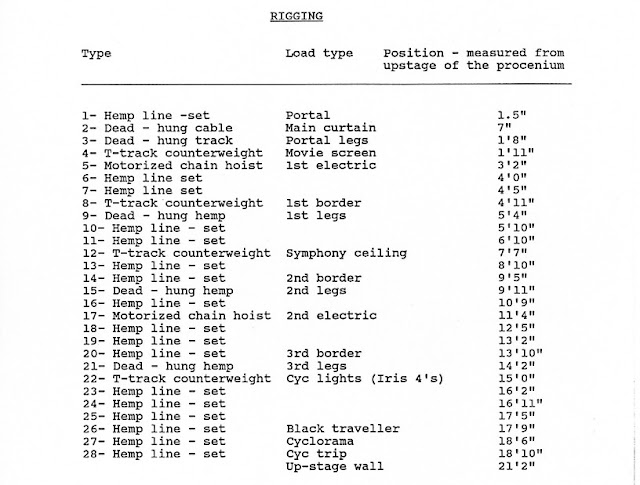 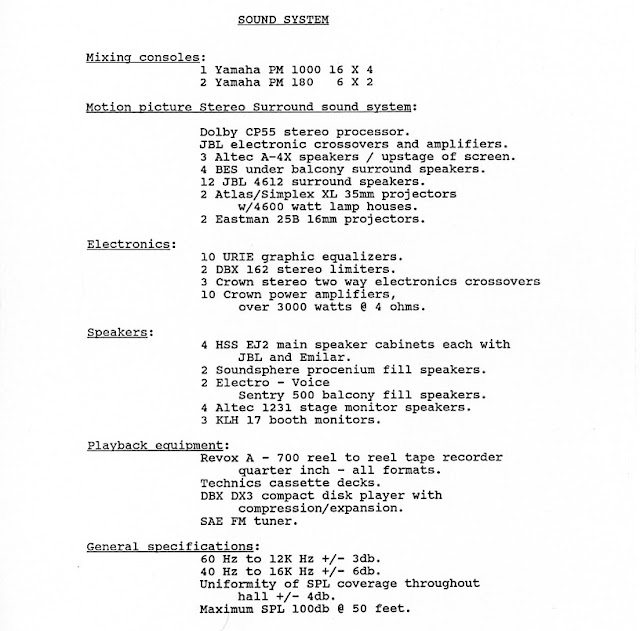 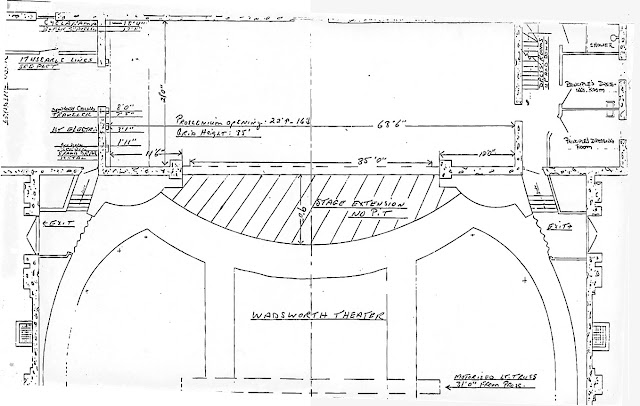 Thanks for sharing this, Ron!


More information: The L.A. Conservancy has a page on the Wadsworth. Also see a Wikipedia article on the theatre. Yelp also has a page. The Wadsworth is also on the site Cinema Treasures.