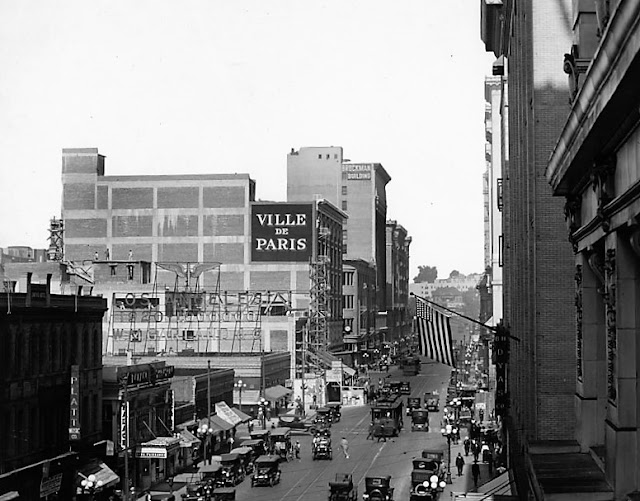 Opened: February 20, 1916. In this 1917 photo taken from Bullocks we're looking west on 7th St. The theatre is the second building in from the left with its "Palace" vertical hiding behind the street lamp. There's another at the west end of the facade saying "Theatre." It's a photo in the Los Angeles Public Library collection.

The building dates from 1910. Before being used as a theatre, it had been a business called the Chocolate Den. It's a half block west of Broadway, just across the alley from the west side of the State Theatre. Before moving to 7th St. the business was at 642 S. Broadway and known as the Palace of Pictures. H.B. Breckwedel was the theatre's manager in 1916. His firm also ran the  Symphony Theatre on Broadway and he was later involved in the Forum Theatre on Pico.

"Christening Of The New Palace Theater Auspicious. On Seventh street between Hill and Broadway there is much traffic both by day and by night, a circumstance which will bring popularity and shekels to the new Palace Theater which opened in that block yesterday, while the painters were still at work on its shining front. Not because it was new and not because it had something wondrous and enchanting to exhibit, but because it is extraordinarily located, the Palace was filled all afternoon and evening. Today, tomorrow and for a long time to come it can hope for big crowds on account of the quality of 'Undine,' the picture used for the christening of the house."

A 1916 ad for the Palace located by Ken McIntyre for a post on the Photos of Los Angeles Facebook page. 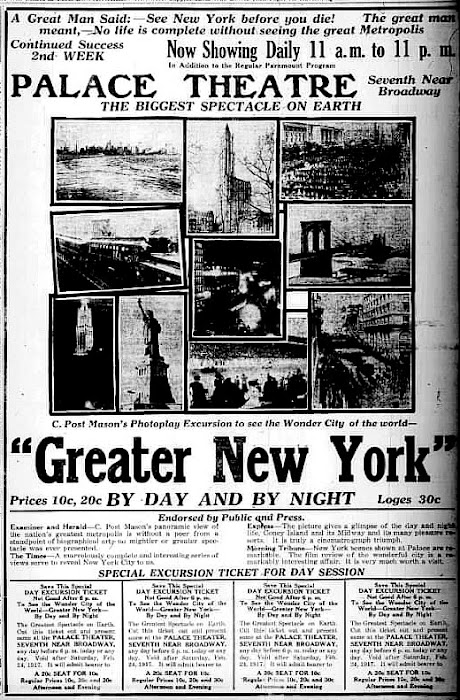 A terrific 1917 ad for "Greater New York by Day and Night: the Wonder City of the World." It was a July 1916 release. The "Special Excursion Ticket" coupons at the bottom got you a 20 cent seat for 10 cents. Thanks to Ken McIntyre for locating this for a post on Photos of Los Angeles.

"In the Heart of the Shopping District." Thanks to Ken McIntyre for finding this 1917 ad for Photos of Los Angeles. "The Hunting of the Hawk" was an April release.

Seating: 700 was the announced capacity. A 1916 issue of Moving Picture World said it seated 633.

Closing: The theatre closed January 16, 1921 when the lease expired. A story in that day's paper:

"'Who’s to Blame?' is to close this evening at the Palace Theater. At the same time the house will be closed permanently, on account of the expiration of the lease, it is announced. 'Who’s to Blame?' deals in an unusually frank manner with social problems and points out the injustice toward the wronged woman. The story was written by Wycliffe A. Hill, president of the Photoplaywrights' League of America. Edward Coxen and Enid Markey are the featured players."

Thanks to Cinema Treasures contributor Jeff Bridges for finding the January 16 article. The theatre was then remodeled for use by the Vogue Millinery Co. and the Model Cloak and Suit House.

Status: The building survives. As of 2020 the east side of the building is vacant. Until 2019 it was a GNC store. Ed's Box & Supply Co. is in the other half. There's nothing of interest to look at inside. 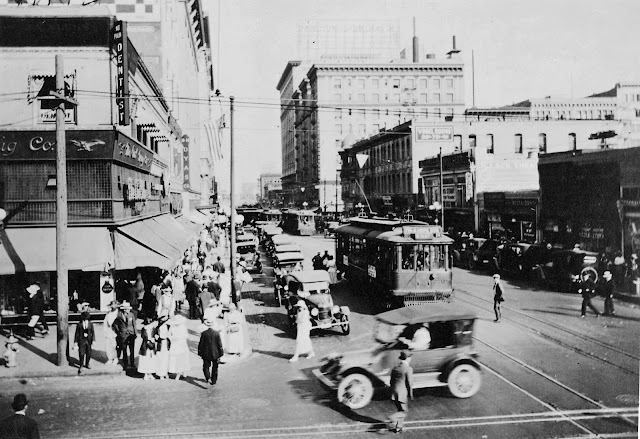 A June 1919 view looking east toward Broadway with the Palace's facade visible just above the front of the streetcar. Beyond are the buildings on the site now occupied by the State Theatre. Across Broadway is the Lankershim Hotel, now gone.  Bullocks later expanded to the northeast corner of 7th & Hill that we see on the left. The photo from the Metro Library and Archive is on Flickr. Thanks to Michelle Gerdes for finding the album the photo appears in. 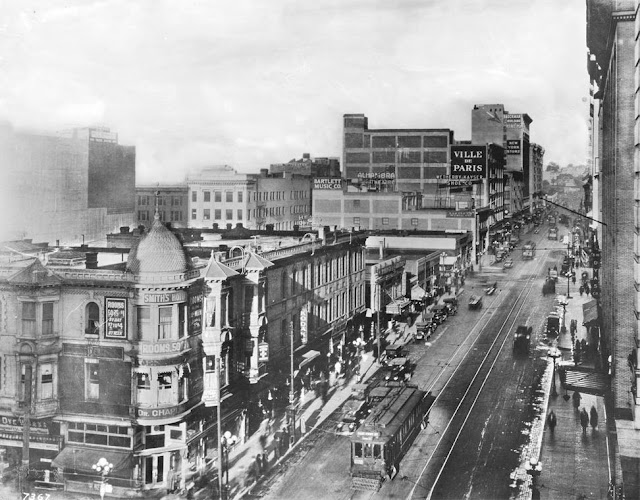 Looking west on 7th Street from Broadway c.1920. The State Theatre would soon rise in place of the buildings on the left. Beyond the alley is the marquee of the Palace Theatre. The photo from the California Historical Society is in the USC Digital Library collection.

Also in view across Hill St. is a roof sign for the Alhambra Theatre. The the sign isn't on the theatre building itself but it has an arrow pointing to the theatre on Hill St. between 7th and 8th. A bit of the back of the building housing the Grand Theatre on Grand Ave. is visible to the left of the Alhambra sign. It went through many names. The lettering on the building at the time of the photo says Strand Theatre. And way down the street on the Brockman Building, the Kinema (later renamed the Criterion Theatre) has a big sign with an arrow pointing off to the right. 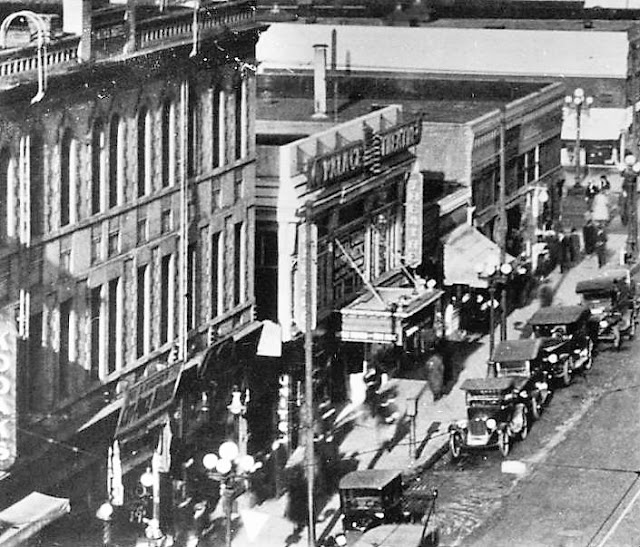 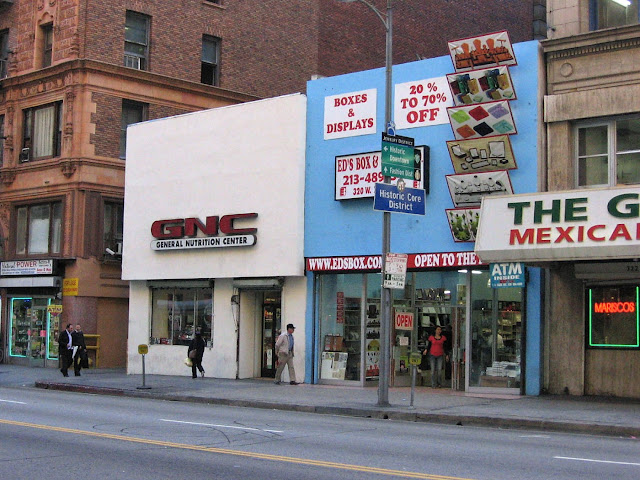 The building in 2010. The red brick and terracotta building to the left is the State Theatre building. Photo: Bill Counter 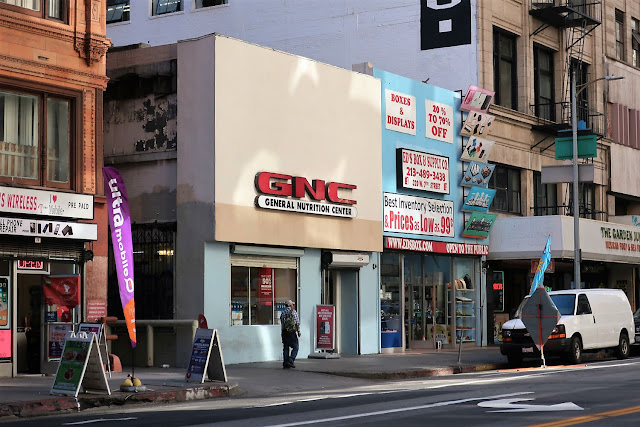 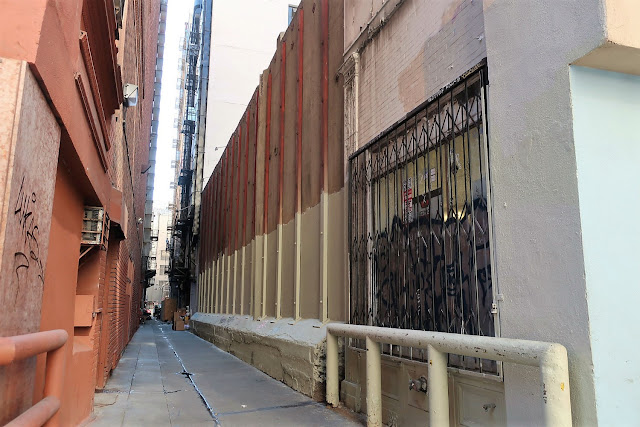 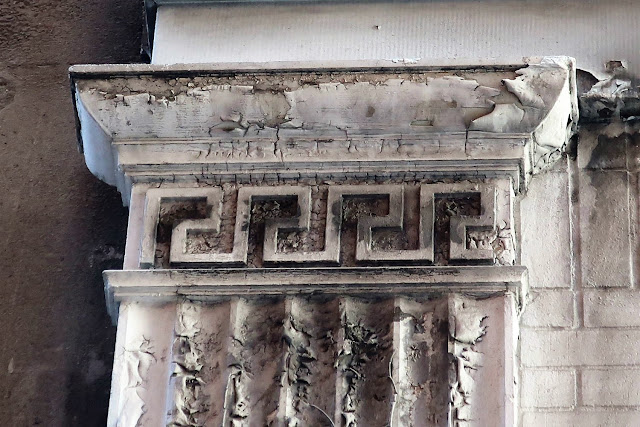 A closer look at a column capital, the last vestige of the building's more elegant past. Photo: Bill Counter - 2018

More information: See the Cinema Treasures page on the Palace Theatre for all the history unearthed by Joe Vogel and Jeff Bridges (aka Vokoban).

The current Palace Theatre: The one at 630 S. Broadway opened in 1911 as the Orpheum. See the Palace Theatre pages for many photos.