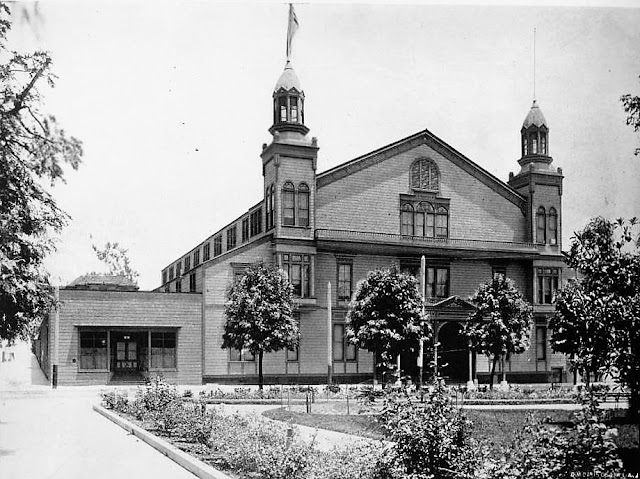 Opened: 1887 by Henry T. Hazard. It was also known as the Academy of Music. Hazard was City Attorney and soon to be Los Angeles mayor. This c.1890 photo by C.C. Pierce was taken looking north across 5th St. from Central Park, renamed Pershing Square in 1918. It's a photo from the California Historical Society that's in the USC Digital Library collection. It was published with the caption "Academy of Music, Fifth and Olive Streets, Exposition Co., owners."

The Pavilion's site had earlier been the location of a cattle corral. Along with Hazard, George H. Pike was also involved in the project. A showman by the name of George "Roundhouse" Lehman had planned to build a large theatre on the site but he went bankrupt and the property ended up with Hazard.

It was a huge 3 story wood barn-like structure with a stage but no fixed seating. The building was 120' x 166'. The ceiling was 50' high. The structure also included a restaurant and art salon. It was intended as an all purpose cultural center for the growing city. 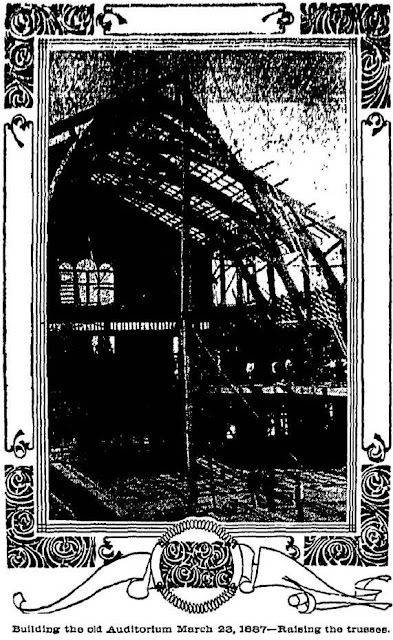 An 1887 construction view that appeared with a June 4, 1905 L.A. Times article about the demolition of the Pavilion. Thanks to Noirish Los Angeles contributor Flying Wedge for finding it for inclusion (with many other photos of the building) in his Noirish post # 43585. 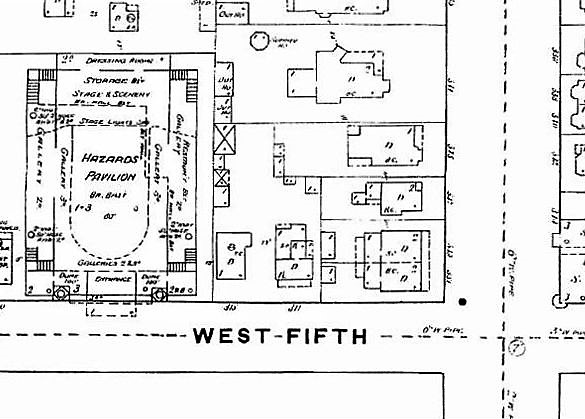 A detail from an 1888 Sanborn insurance map from the Los Angeles Public Library collection showing the orientation of the Pavilion. That's Hill St. on the right.

Seating: The capacity was reportedly 4,000.

It hosted everything from the flower festival, citrus fairs, conventions to William Jennings Bryan. The Metropolitan Opera performed here in 1887 with a company of (reportedly) 300. In 1891 Henry M. Stanley did his lecture called "In Darkest Africa." 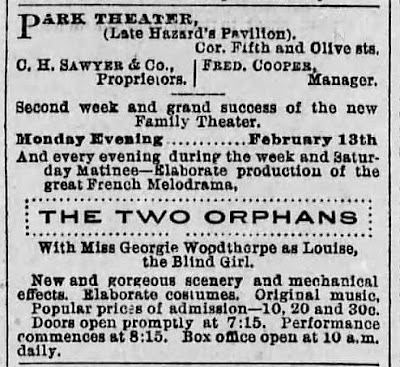 In 1893 it was being called the Park Theatre. Thanks to Ken McIntyre for finding this ad for a post on the Photos of Los Angeles Facebook page.

An 1897 ad for the Corbett-Fitzsimmons fight. Well, it was in Reno but they'd give you the information as they received it by telegraph. Films of the fight later circulated widely. Thanks to Ken McIntyre for locating the ad. The Music Hall evidently was the venue later known as Lyceum Hall, 231 S. Spring.

Films at Hazard's in 1898. Thanks to Mary Mallory for finding this ad for Edison’s Projectoscope in the September 30 issue of the Los Angeles Herald. Thomas Tally, at the time running films at his phonograph parlor at 311 S. Spring St., was evidently looking around for a larger venue. See Ms. Mallory's two fine articles about Tally's career on the site The Daily Mirror: "T.L. Tally - L.A.'s Pioneer Film Exhibitor Part 1" and "T.L. Tally Part 2." Also see the page about the various Tally's Phonograph and Vitascope Parlor locations here on this Los Angeles Theatres site.

The Temple Baptist Church held Sunday services in the Pavilion and in 1905 bought the property for $170,000. After establishing the Auditorium Company with some stock held by the Church but mostly by downtown businessmen who saw a need for an upgraded civic auditorium, plans were hatched for a more permanent structure.

Status: Hazard's was demolished in 1905 for construction of the Temple Theatre, later known as the Philharmonic Auditorium. 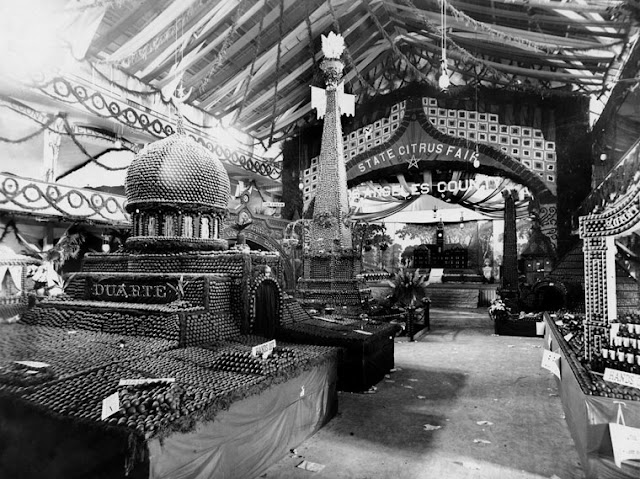 The State Citrus Fair in the Pavilion in 1891. It's a Los Angeles Public Library photo. 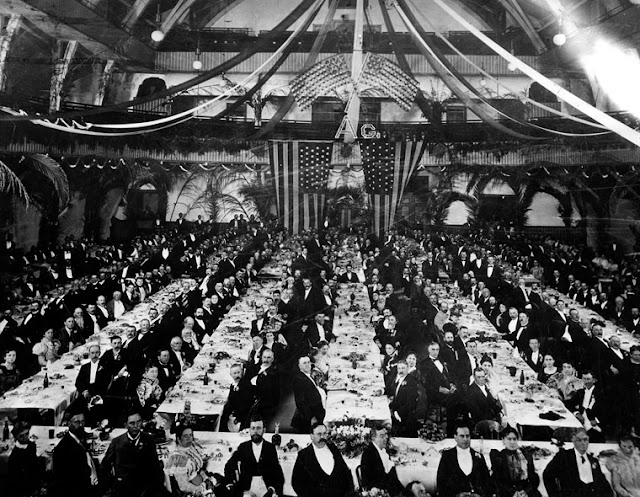 The interior decorated for a banquet with William Jennings Bryan in 1899. It's a Los Angeles Public Library photo. A May 4, 1903 C.C. Pierce photo from the California Historical Society in the USC Digital Library collection. 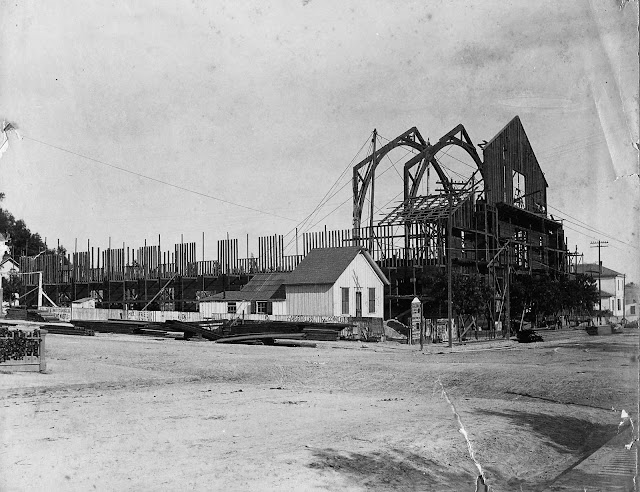 A construction view in the Huntington Library collection. Thanks to Noirish Los Angeles contributor Flying Wedge for finding it for his Noirish post # 43585. The photo is also in the collection of the L.A. County Natural History Museum. 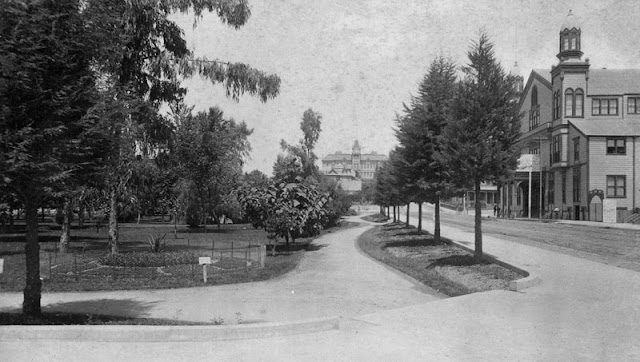 Looking west on 5th St. in an undated view from the Los Angeles Public Library collection. On the left it's Central Park. Hazard's Pavilion is on the right. In the background is the State Normal School. 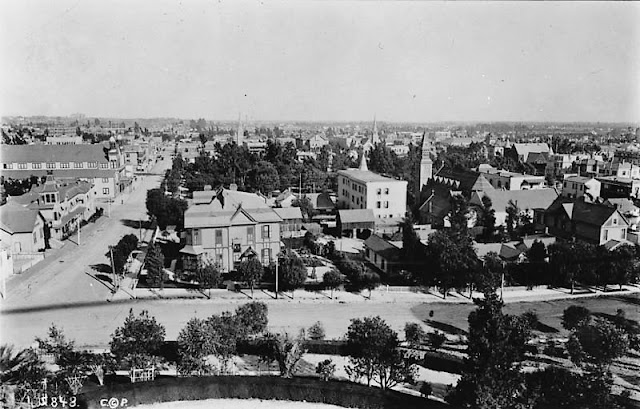 The view east from 8th & Grand in 1890. On the left we're looking down 5th toward Hazard's. It's a Los Angeles Public Library photo. 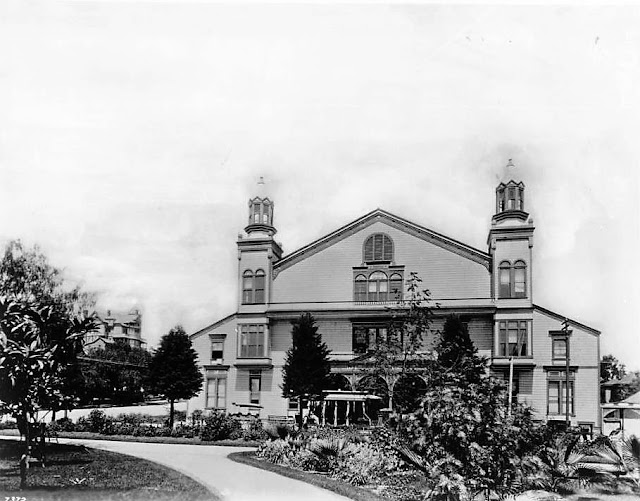 A c.1895 view from the park. The California Historical Society photo credited to C.C. Pierce is in the USC Digital Library collection.

The California State Library has a version of the same photo that they credit to Martin Behrman. The Library also has a another facade view by Mr. Behrman that they date as c.1899. 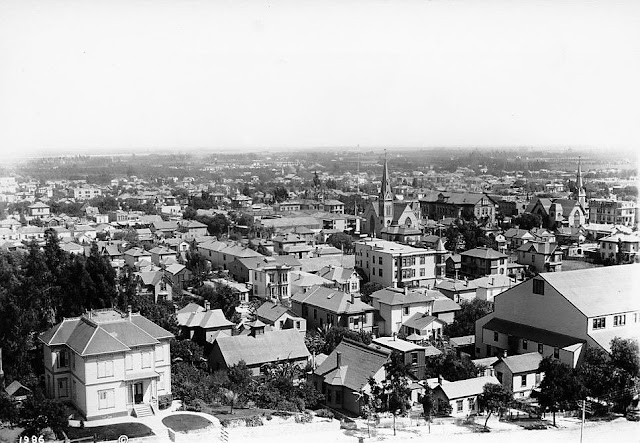 The back of the Pavilion in the lower right corner of the image. It's a photo in the USC Digital Library collection. Thanks to Noirish Los Angeles contributor Los Angeles Past for spotting it for his Noirish post #461. 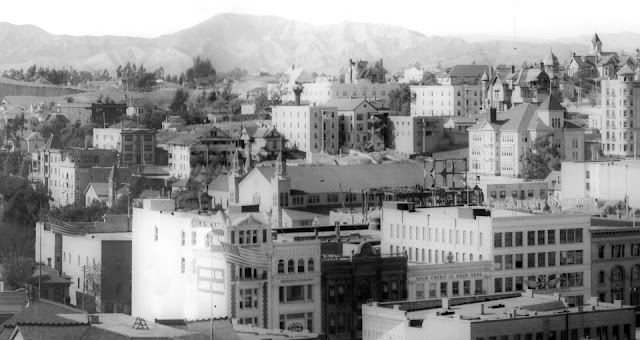 Hazard's is in the center of this detail from a panoramic image taken in 1904 from the top of the unfinished Pacific Electric Building at 6th and Main, a building that opened in January 1905. It's from the California Historical Society and appears on the USC Digital Library website. Over to the right note the roof sign for the Los Angeles Examiner on the 600 block of Broadway.

"Music Halls of Yesterday," an article from Overture Magazine in 1948 mentions Hazard's Pavilion. It's in the USC Digital Library collection. Wikipedia has an article on Hazard's.