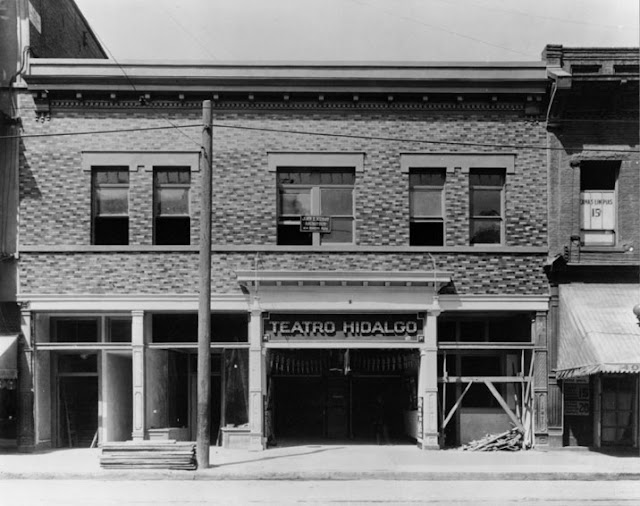 Opened: It opened as the Hidalgo in 1912. It's in the city directories from 1913 onward as the Hidalgo with the exception of 1920 when it was listed as the Sun Ban Theatre. This pre-opening view is from the El Pueblo Monument Photo Collection (213-628-1274) and appears on the Los Angeles Public Library website.

The location was on the west side of the street opposite Arcadia St., which at the time deadended at Main. Arcadia has now moved north a bit and has also been pushed through west of Main. On Google Maps a 393 address is a better approximation of the theatre's location than 373.

Architect: John E. Kunst. Note his sign hanging on the second floor of the building. Thanks to Cinema Treasures researcher Joe Vogel for finding an item about the new building in the "Notices" section of the June 1912 issue of Southwest Contractor & Manufacturer. It said that Kunst had designed a new theater addition to a building that was being remodeled at 369-373 N. Main. 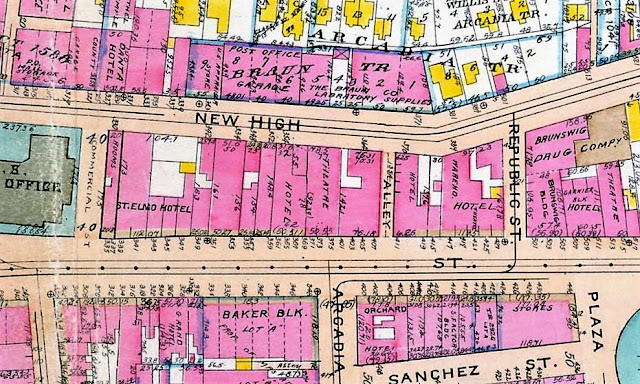 The theatre can be seen at 373 N. Main on the north side of the street in the center of the image. It's a detail from plate 003 of the 1921 Baist Real Estate Survey from Historic Map Works. On the 1910 Baist map the property is shown as a hotel.

"Among many other cosmopolitanisms, Los Angeles now harbors a real Mexican theater. Located in the heart of Sonoratown, it is housed in the Teatro Hidalgo, which, translated into plain, unassuming English, means simply the Exalted Theater……With the 3x5 stage of the exalted playhouse at No. 371 North Main street, the Mexican company finds itself somewhat restricted in the presentation of dramatic spectacles…..The house itself is one of the stand-bys of lower Los Angeles, and has seen every variety of service, from burlesque and motion pictures to an animal show and high-class foreign theatricals." 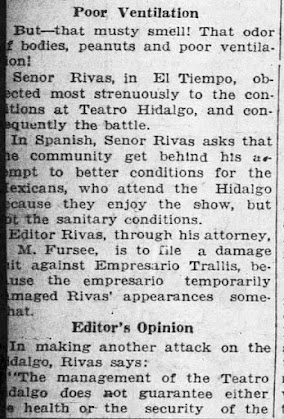 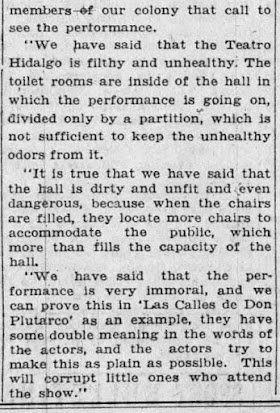 A March 1923 article located by Ken McIntyre for a thread about the theatre on the Photos of Los Angeles Facebook page. 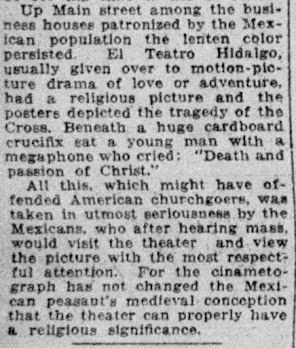 An April 1924 L.A. Times item mentioning the Hidalgo. Thanks to Ken McIntyre for adding it as a comment to a another post about the theatre on Photos of Los Angeles. 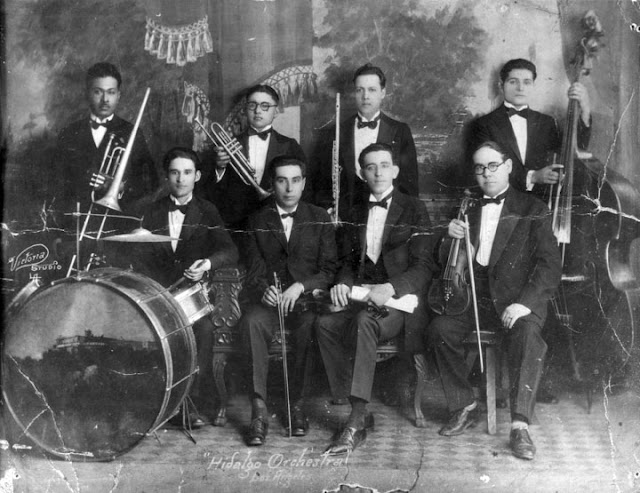 A c.1926 photo of the theatre's orchestra from the Los Angeles Public Library collection.

The theatre was listed as a venue running Paramount product in a "Paramount Week" ad that appeared in the September 6, 1925 issue of the L.A. Times. The Hidalgo is still listed in the 1929, 1932 and 1936 city directories. 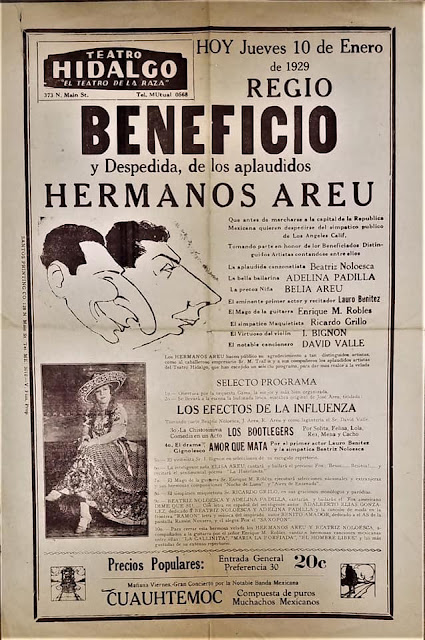 A January 1929 Flyer for the theatre. Thanks to Ken McIntyre for finding it for the Photos of Los Angeles Facebook page. It's from the Workman and Temple Family Homestead Museum Collection at USC. It makes an appearance in "Broadsides Reveal L.A.'s Once-Booming Hispanic Vaudeville Scene," a 2020 KCET article by Afroxander. Thanks to Joe Vogel for locating the article.

Closing: The closing date is unknown. They were optimistic in 1931. An L.A. Times item located by Ken McIntyre noted that Teatro Hidalgo Ltd. signed a new nine year lease. Teresa Bodrero owned the building at the time. The Hidalgo is not in the 1938 or 1942 city directories.

Status: That side of the block was demolished when Arcadia St. was extended west and realigned as part of the 101 Freeway construction.

The Hidalgo in the Movies: 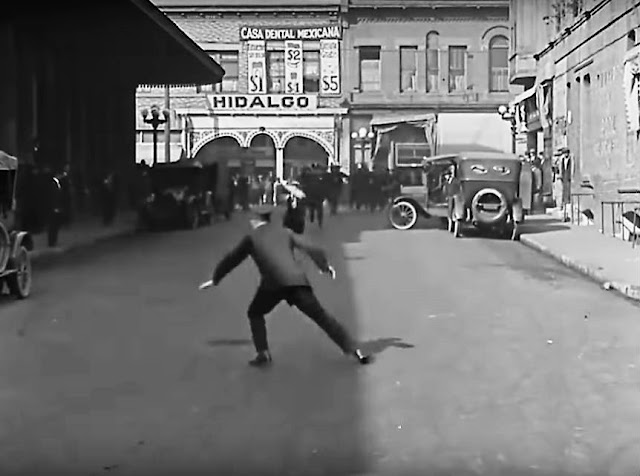 We get this nice look up Arcadia St. toward the theatre in the Buster Keaton film "Cops" (First National, 1922). He's being chased by them, of course. Here the theatre was showing off the fanciest version of the several facade treatments it had received. See the Historic L.A. Theatres in Movies post for more about the film and an obstructed view of the Egyptian Theatre under construction.

A look west on Arcadia St. toward the theatre in the late 20s or early 30s. This side of Main it's the Baker Block on the left and the Orchard Hotel on the right. Turn right at the corner and you're looking at the block with the Merced Theatre and the Pico House. Thanks to Cinema Treasures contributor Elmorovivo for finding the photo for the site's Teatro Hidalgo page. 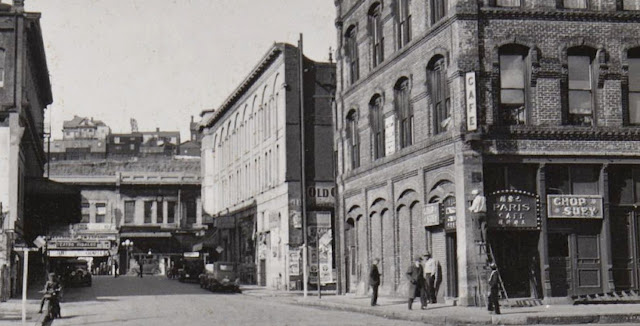 A version of the image above with different cropping that was located by John Bengtson. It's Los Angeles St. in the foreground and the south end of Sanchez Alley halfway up the block on the right. 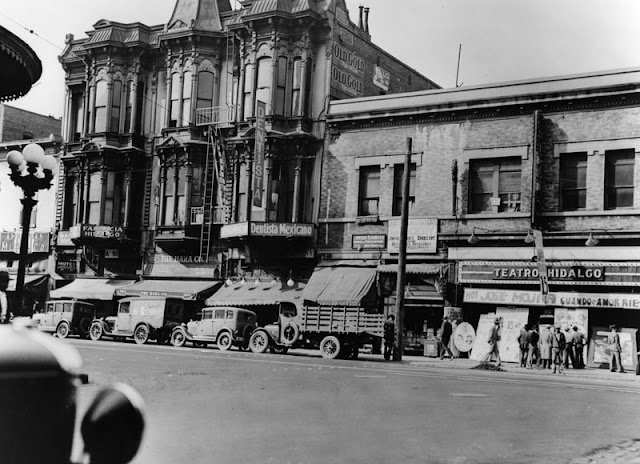 A closer look west toward the theatre. It's a photo in the Los Angeles Public Library collection.The banner is advertising Jose Mojica in "Cuando el amor ríe," a 1930 film that IMDb asserts didn't get a U.S. release until 1933. 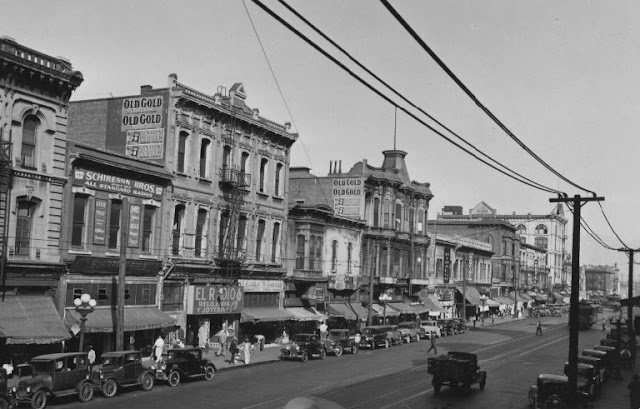 Looking north on Main toward the Plaza c.1932. The Hidalgo is about 2/3 of the way down the block.  It's a photo by Anton Wagner from the California Historical Society collection. Wagner took hundreds of photos of the L.A. area in 1932 and 1933 for a thesis topic having to do with the way the area's topology influenced the character of its inhabitants. See the full Anton Wagner: Los Angeles 1932-33 set of over 400 photos on the CHS website.

That second building in from the left with the musical instrument/radio store Schireson Bros. as tenants had once been the location of the Nickel / Playo / Plaza Theatre. They were gone by 1909. 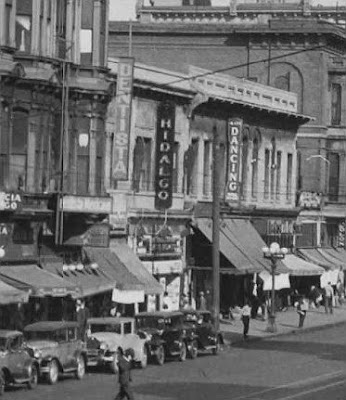 A detail from Wagner's photo. 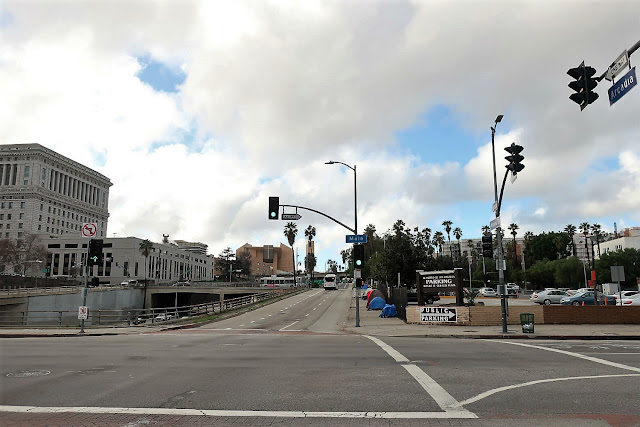 Looking west on Arcadia. Everything that was on the north side of Main St. is gone. Photo: Bill Counter - 2019