Opened: February 26, 1926 as the La Mirada Theatre, the name derived from the cross street. "Bluebird's Seven Wives" was the initial feature. This version of a c.1935 photo looking north on Vine St. toward the Filmarte is one Gary Palumbo found for a post on the Images and Memories of Los Angeles Facebook page. It was on a Water and Power Associates Museum page credited to the Los Angeles Public Library collection.
The photo also appears as one of over 800 images in the great book "The Story of Hollywood: An Illustrated History" by Gregory Paul Williams, available on Amazon. It's on page 225 and is included on the preview of the book on Google Books. 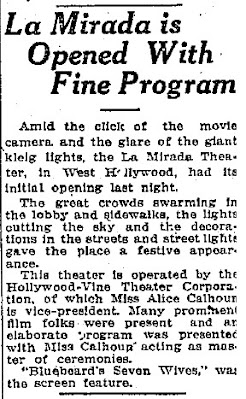 An item about the opening that appeared in the February 26, 1926 issue of the L.A. Times. Screen star Alice Calhoun was also a partner in the Marcal, a house opened in 1925 that was later known as the World Theatre. 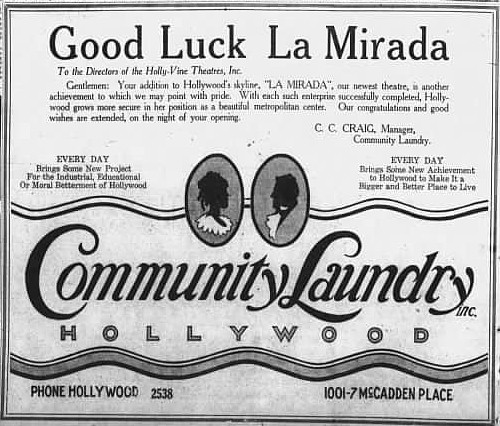 "...Hollywood grows more secure in her position as a beautiful metropolitan center," advised Community Laundry in this congratulatory ad. "Every day brings some new achievement to Hollywood to make it a bigger and better place to live." Thanks to Ken McIntyre for locating the ad.

A March 3, 1926 ad for the theatre. Thanks to Ken McIntyre for locating it for a post on the Photos of Los Angeles Facebook page. "The Live Wire" was a September 1925 release.

The new theatre got a mention along with two small photos in the Better Theatres section of the May 15, 1926 issue of Exhibitors Herald. Thanks to Mike Hume/Historic Theatre Photography for finding it on Internet Archive. The Herald noted it was a project of Holly-Mar Theatres, Inc., and had cost $100,000 to build.

In 1928 it was renamed the Filmarte and promoted as a venue for serious film lovers. An L.A. Times April 1928 article about the new venture "Filmarte Theatre Launched" noted that they would be running "Strange, Artistic, Foreign Pictures" -- and that a woman ("100 pounds of piquant femininity") would be running it! The woman in question was Miss Regge Doran. Reopening was May 9 with "The Golden Clown" a silent film from Denmark. Thanks to Ken McIntyre for finding the article. He also found the May reopening ad.

As the Filmarte it was a West Coast Theatres operation. It had good runs of a number of French films in the 1930s and became a revival house in the 40s while still under Fox West Coast management.

In the early 50s it was put to use as a TV studio for various shows.  In 1957 it was renamed the Linkletter Playhouse and became home of Art Linkletter's "People Are Funny." Part of the run of "You Bet Your Life" with Groucho Marx was done at the Filmarte.

From 1962 to 1964 it was known as the Steve Allen Playhouse. Clarkus, one of our contributors, notes that the "Steve Allen Show" is "now considered to be one of the landmark shows of television history, introducing countless new comedians and performers and some of the greatest ad-lib comedy sketches of all time." He adds: "I believe the Filmarte was selected for a TV studio because of it's proximity to the Pacific Telephone video hub at Sunset and Gower. At that time, almost all video in and out of LA ran through this hub. When sending TV signals down coaxial cables, distance was critical - the shorter the better."

Later it was used as a rehearsal space for musical acts and as a production facility for music videos. Marc Wanamaker relates that in 1967 Gary Essert wanted to open his club Kaleidoscope there. After a month of painting, removing seats and decorating, they got kicked out. The landlord, National General, decided they didn't want that kind of operation in one of their buildings. Their tenant had sublet without their approval. Ken McIntyre found the April 1967 L.A. Times article about the mess. After moving the opening weekend to the Embassy Room at the Ambassador, the operation later settled in at the Earl Carroll.

In the 70s the building was known as the Hilliard Studio Sound Stage. A fire destroyed the interior in 1990 -- the L.A. Times had a story. At the time it was a being used by a production company called Late Night Studios.

Seating: The original capacity was listed as 825 in a May 1926 Exhibitors Herald item. Cinema Treasures has a 900 number from an unspecified source, perhaps from a later Film Daily yearbook.

Status:  What was left of the interior after the fire was gutted. There was excavation done for underground parking and the structure was rebuilt as office space. It's currently occupied by a mental health clinic. 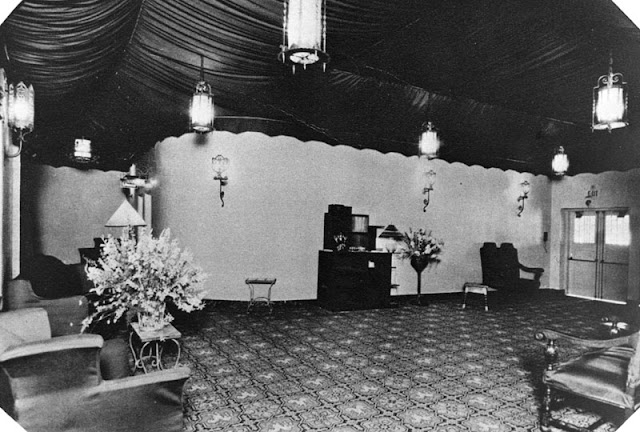 A lobby view from the Los Angeles Public Library collection. It's a shot taken after the draping project of the early 40s. 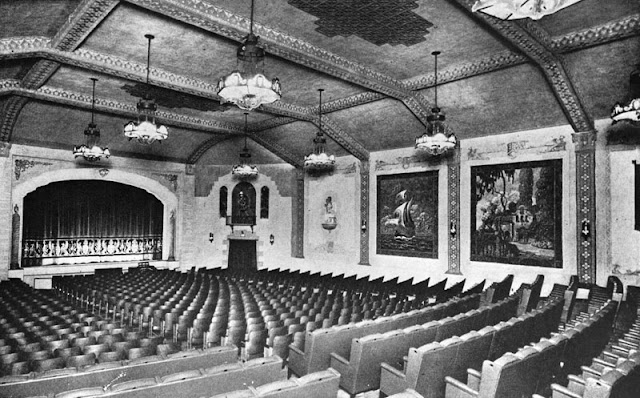 An early view of the auditorium as the La Mirada from the Los Angeles Public Library collection. Note those comfy loges in the back. 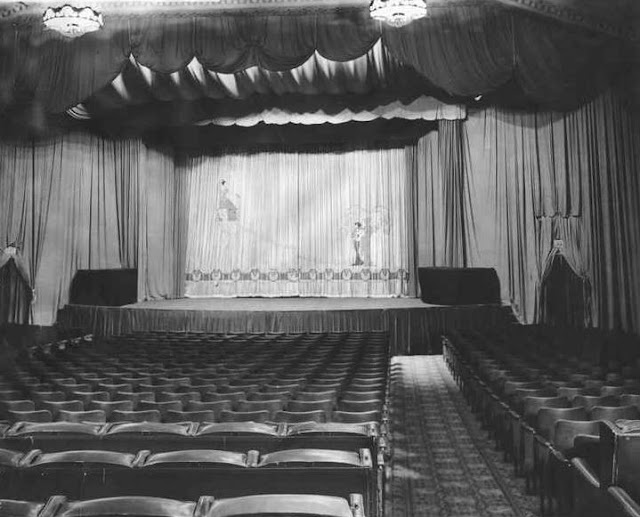 A rare 1943 view of the interior after some serious draping. Thanks to the wonderful Bruce Torrence Historic Hollywood Photographs collection for the photo. It's their item #T-014-4. 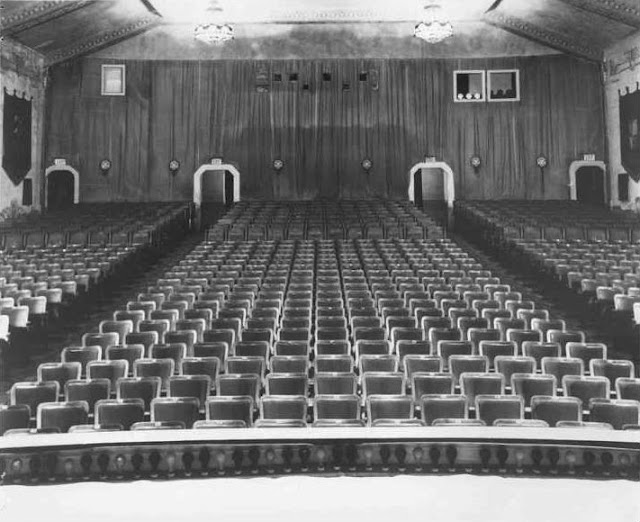 The rear of the house in 1943. It's a photo in the Bruce Torrence Historic Hollywood Photographs collection, their #T-014-5.
More exterior views: 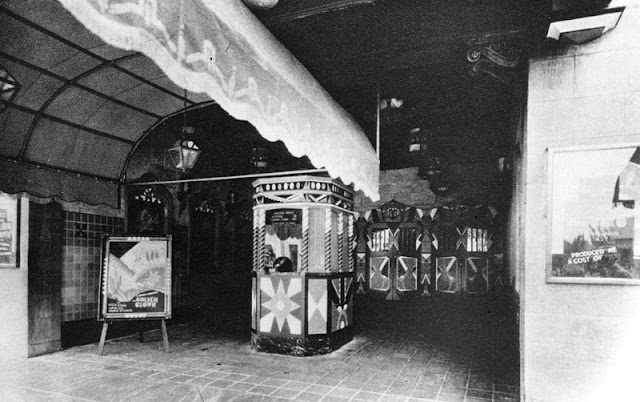 A look at the Filmarte's boxoffice from the Los Angeles Public Library collection. They're running "Klovnen" (aka "The Golden Clown") a Danish film from 1928. It was the first film when the theatre reopened as the Filmarte. 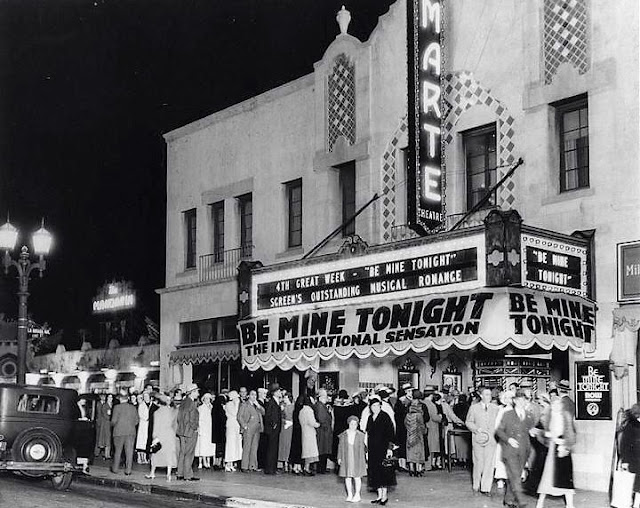 The Filmarte in 1933, running "Be Mine Tonight." Thanks to Ken McIntyre for spotting this one -- he had it as a post on the Facebook page Photos of Los Angeles. The photo is in the Bruce Torrence  Historic Hollywood Photographs collection as their item #T-014-2. 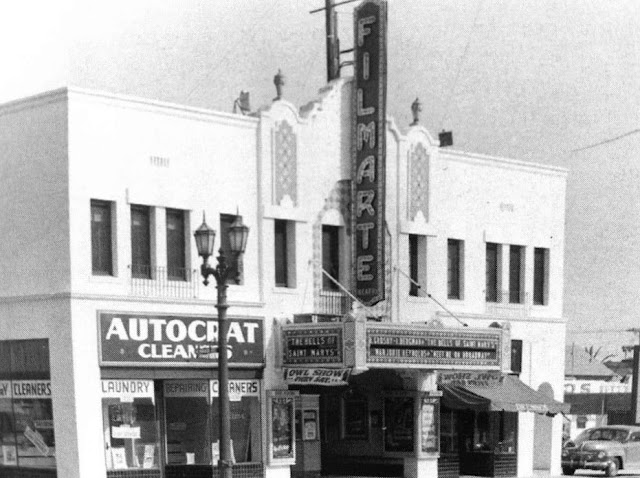 "Owl Show Every Saturday." The theatre in 1946 running "The Bells of St. Mary's" with Bing Crosby and Ingrid Bergman. Thanks to Ken McIntyre for a post of the photo on Photos of Los Angeles.

Signage on the theatre's south wall can be seen on the bottom edge of this 1955 photo. Thanks to Martin Turnbull for locating it for a post on his Hollywood's Garden of Allah Novels Facebook page. He notes that "we can see the signs for the Hotel Knickerbocker, the Broadway department store, and the Plaza Hotel, as well as the Miller beer sign atop of the Taft Building at Hollywood and Vine. All four of those buildings are still with us, which for L.A., is a minor miracle." 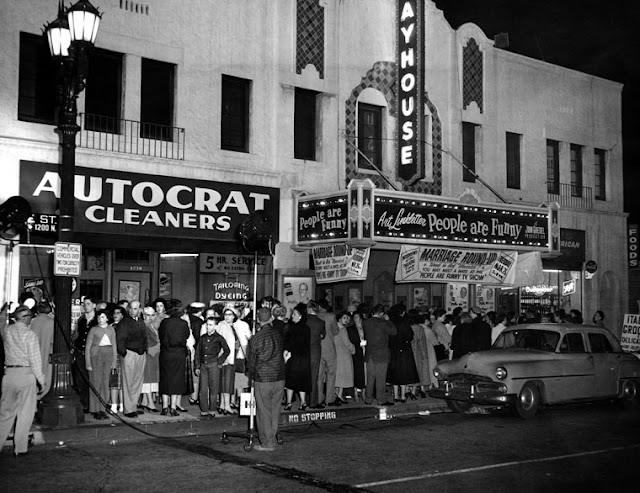 A 1957 photo taken by Gerald A. Smith when the Filmarte Theatre was being used by Art Linkletter. It's in the Los Angeles Public Library collection. While it used to be online indexed as their #00028690, evidently it got lost in a website makeover. A 60s view of the theatre in use as the Steve Allen Playhouse. Thanks to Noirish Los Angeles contributor Ethereal Reality for spotting it on eBay. He has it on his Noirish post # 55494. 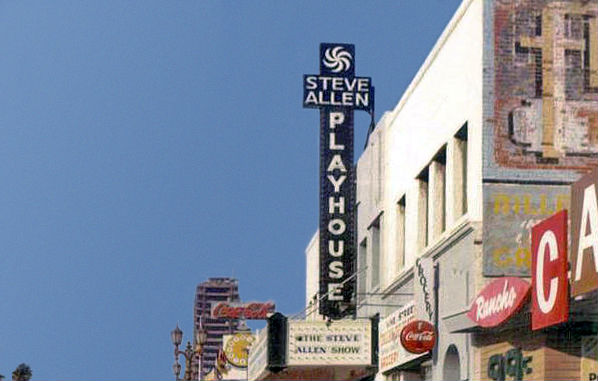 The theatre in use in 1962 for the Steve Allen Show. Note the old Filmarte sign on the side wall. It's a photo from Nick Faitos. Thanks to Ken McIntyre for spotting it. And thanks to Clarkus for doing some fine color correction and other work on it. 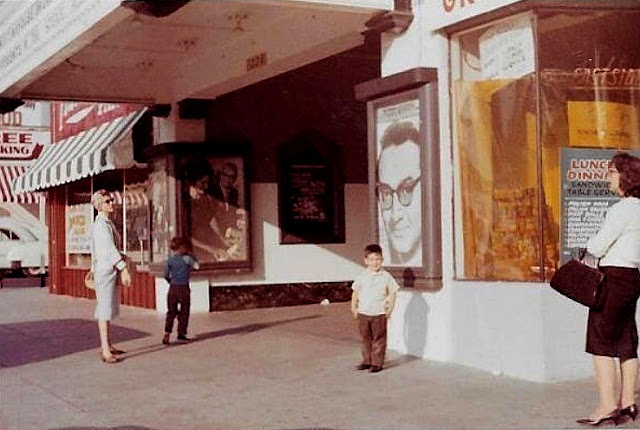 In front of the theatre in 1962. It's a photo from Nick Faitos that appears with Alison Martino's 2017 Martino's Time Machine post about the Hollywood Ranch Market. Thanks to Noirish Los Angeles contributor Ethereal Reality for spotting it for his Noirish post # 55494 where he also includes several shots of Steve Allen doing stunts for his show at the nearby market. 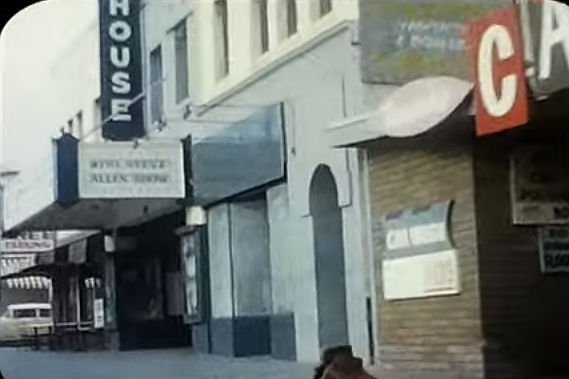 We get a drive-by in "Hollywood 1964," two minutes of footage on YouTube from John Bryant. In a post on Photos of Los Angeles he notes that the footage was shot by one of his grandparents. Thanks to Alex Rojas for spotting it. We also see the Pantages, the Iris/Fox and the Chinese.

More information: See the Cinema Treasures page for interesting research by Joe Vogel and other contributors. Wikipedia has an article on the building as the Steve Allen Playhouse.

Thanks to Ken McIntyre for finding the L.A. Times articles about the Filmarte opening and the Kaleidoscope debacle. He had them as a comments to a post of a Filmarte photo on Photos of Los Angeles.

See the page on the Sherman Theatre in West Hollywood, another house exemplifying the "Little Cinema" movement in the mid 20s.