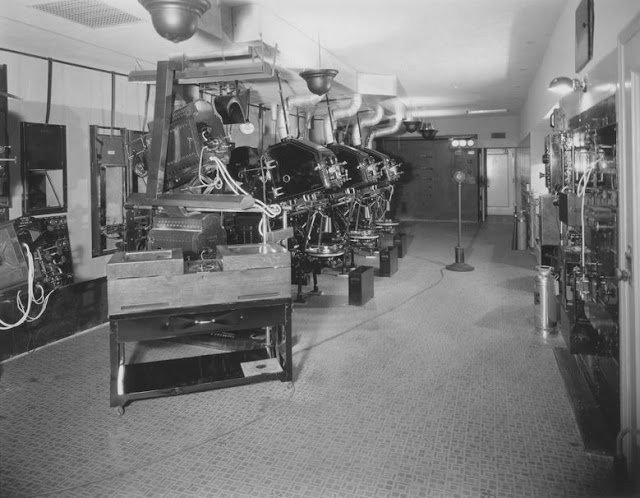 A 1930 Mott Studios photo from the west end of the booth. That beast with the strange hood closest to us is the dual Brenograph effects projector. Beyond are the film projectors: Super Simplexes with Hall & Connolly lamps on Western Electric Universal bases. This is one of 5 photos in set #001416979 of the California State Library collection.

Like a lot of theatres of the era, it was described as being ready for wide film. There were 70mm and 65mm processes that made it to a few theatres in the 1929-31 time period. The "readiness" at the Pantages did include a big screen and a comfortably wide proscenium but the theatre didn't get projectors capable of running anything other than 35mm until 1960.


The 1930 booth equipment: The Pantages opened with Super Simplexes and a Western Electric sound system that could handle both film and disc reproduction. In addition, an elaborate public address system included coverage of the auditorium, lobby and lounge areas. And we had a huge complement of follow spot and effects projector gear in the booth.

"More than $125,000 in electrical equipment has been installed. Of this amount $60,000 has been expended on the projection room and its equipment and $20,000 on the sound equipment. In the projection room, the building of which was supervised by Cass Hayes, consulting engineer for Pantages theatres, four projectors have been placed. They are equipped to handle both sound on film and on disc and are adaptable to Grandeur film. These projectors are run by two specially designed generators, claimed to be the largest in use in any theatre. These also are made to handle Grandeur film. The projection booth which is 50 feet long and 16 feet wide has nine control stations. Besides the projectors there are three spot lights, two floods and a special effects machine. Next to the projection room is a fireproof film vault, a room for the resistance board and a monitor room for the public address system." - "A House Built For Wide Films"- Motion Picture News - June 7, 1930. Thanks to Mike Hume for finding the article.


"There are four projectors in the projection room equipped to handle sound-on-film, disc and wide-film. The booth is 16 feet wide and 50 feet long. Its construction was supervised by Castle Hayes, chief consulting engineer for the Pantages circuit. Spots, floods, and a special effects lamp are included, with nine remote control change-over stations in the equipment.." - "Hollywood's Newest Temple of its own art - the Pantages" - Exhibitors Herald-World - August 30, 1930

Despite the two accounts above talking about four projectors, there evidently were only three. In "Projection at the Pantages," an article by F. H. Richardson in the October 25, 1930 issue of Exhibitors Herald-World he lists the equipment as three Super Simplexes with Ashcraft 600 lamps, a Brenograph, two Brenkert spotlamps, an Ashcraft high intensity flood and two Chicago Cinema spots (with five color effects each!). The sound equipment was by Western Electric, some of which he describes in detail. Note that in the Mott Studios photo of the booth we see the projectors with Hall & Connolly lamps, not the Ashcrafts mentioned by Richardson.

Sightlines: The shallow slope of the balcony was dictated by sightlines to the screen: "The architectural trend of the future in preparation for the wide-screen-large-picture development is demonstrated in the new Pantages...This new wrinkle in theatre construction is evidenced by the low rear balcony, height of which permits full vision of the screen at any point. The downstairs rear seats also have full view of the Grandeur screen..." - Motion Picture News - June 7, 1930

The screen: It was ready for standard 1.37, Magnascope or, if it ever arrived at the Pantages, wide film such as the 70mm Fox Grandeur process. The frame had motorized masking, typical for Magnascope installations. We get slightly different numbers for the size depending on the article you read.

"Three Way Screen - The screen which has a special masking device which can be used for standard, Magnascope and wide film as it is 56 feet wide and 27 feet high." - Motion Picture News  - June 7, 1930

"Seventy-five sets of scenic lines stretched overhead above the stage include the screen, which is 30 by 60 feet in size. A motor control masking device diminishes or increases its size, according to the picture, whether standard or wide film." - Exhibitors Herald-World - August 30, 1930

Stage speakers: They were in a box that traveled offstage on a monorail. See the backstage page for a discussion as well as several photos. They were Western Electric 12A horns with 555 drivers. In the early photos we see only 4 horns, despite several trade magazine mentions of 8.

"Sound Box on Mono-Rail - On the stage, hung from a mono-rail track, is the sound box. This device carries eight horns and is moved off stage to one side when presentations are on. Augmenting these are five extra horns, one at each side of the proscenium arch, and three above the arch. This system will enable the operator to throw the sound to any part of the house with equal clarity..."- Motion Picture News - June 7, 1930 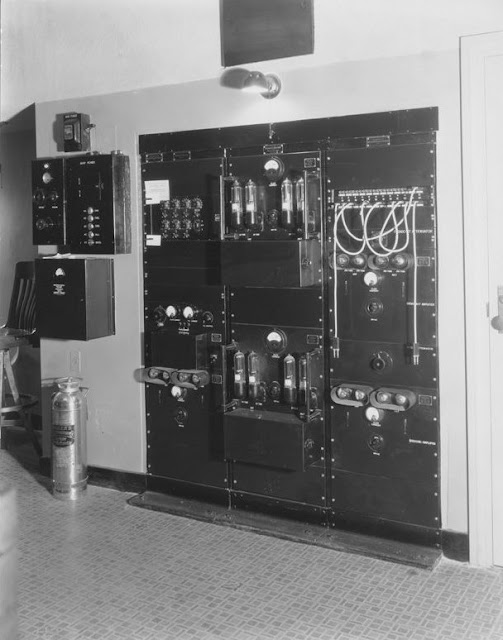 The Western Electric amp rack for the film sound system. In the left rack we see the horn control panel, one 41-A amp and one 42-A amp. In the center rack are the two 43-A power amps. In the right rack below the patchbay are two 42-A amps. It's a Mott Studios photo in the California State Library set #001416979. 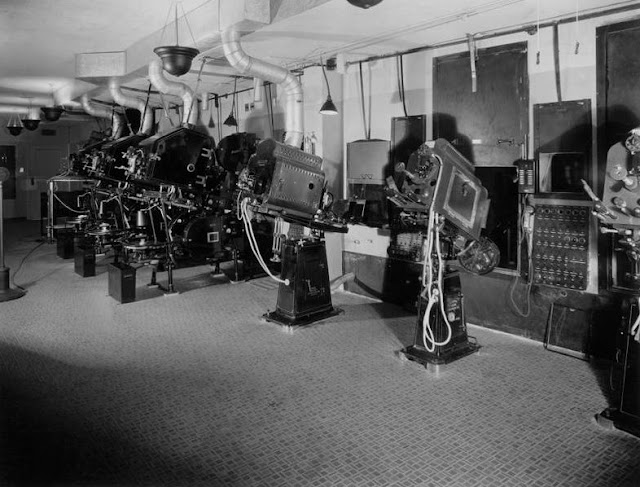 The vista at the east end of the booth. The follow spots are nearest us with the film projectors beyond.  This Mott Studios photo is one of 17 of different areas of the building in set #001407754 of the California State Library collection. 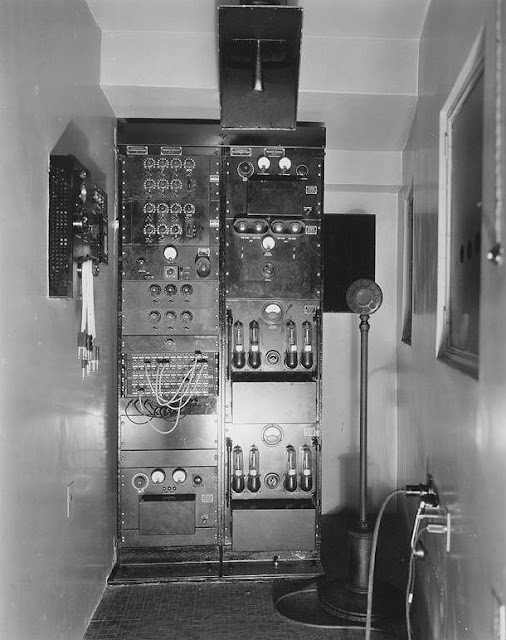 The PA room adjacent to the booth. In the two PA racks we have 2 207A horn control panels, one 203B panel, a patch panel, two 41-A amps (with the boxes covering the tubes), one 42-A amp and two 43-A amps. On the left wall we have a 42-A amp bridging the film sound equipment's output -- it could be patched into the PA system if desired. The Mott Studios photo is included in the California State Library collection set #001416979. See the backstage page for a discussion of the location of the PA speakers in the auditorium and other areas.

Upgrades in the 30s, 40s, 50s: Well, there were undoubtedly were a few, as would befit a major first run house. Alas, there are no photos or bits of information.

70mm arrives in 1960: The theatre got an installation of Norelco DP70 35/70 mm machines and Ashcraft Super Cinex lamps in 1960. The Pantages hosted many reserved seat engagements including "Spartacus" in 1960 and "Cleopatra" in 1963.

"Indoor Luxury From Sidewalk To Screen," a May 9, 1960 Boxoffice article, discussed the first phases of a 1960 renovation program. Also see page two of the article on the Boxoffice site. The later aspects were detailed in a January 30, 1961 article titled "RKO Pantages in Los Angeles Faces New Era After $100,00 Remodeling."

A 55' x 27' screen was installed and the front of the house completely draped. Or, as Boxoffice put it: "...the proscenium arch was eliminated." The actual picture size for "Spartacus" was 54' x 20'.

The sound was an Ampex 6-4-1 system with "high level mixing" -- meaning changeover switching was post-preamp. Speakers were Altec Voice of the Theatre. Boxoffice noted that the 4 3/4" Bausch & Lomb lenses ("the first and only ones of their kind") were, of course, made especially for the RKO Pantages and "are the result of a series of new developments."