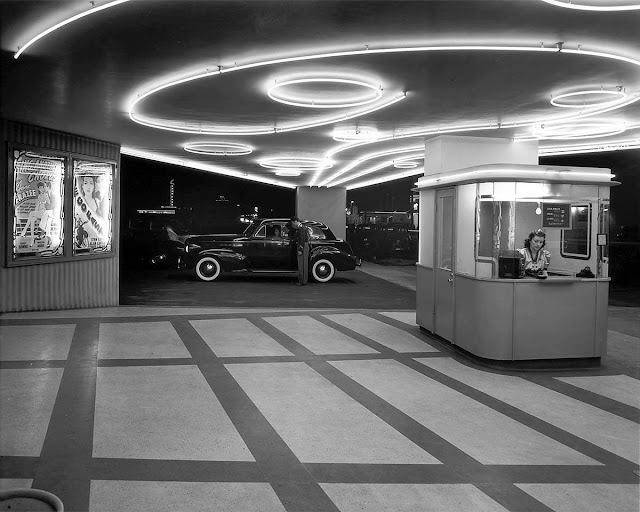 Opened: November 14, 1941 as an independent neighborhood house called the Crenshaw Theatre. It's on the east side of the street a block north of Jefferson Blvd. The lovely 1942 Julius Shulman photo of the theatre's entrance is in the collection of the Getty Research Institute.

The display cases have posters for the 1941 releases "Sing Another Chorus" and "We Go Fast." Bruce Kimmel notes that this double bill opened February 4, 1942. Admission at the time of the photo was 22 cents with Juniors getting in for 17 cents and Children for 11. Steve Milner notes: "The ‘39 Olds was Shulman’s, with his wife behind the wheel."


Architect: S. Charles Lee. Some sources (including the Getty Research Institute) credit Paul Laszlo as the architect but the UCLA S. Charles Lee Papers Collection has the drawings Lee did for the theatre. 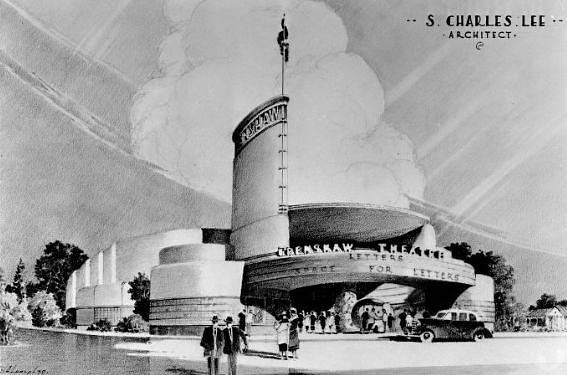 A fanciful early design for the theatre's facade by S. Charles Lee. What got built was noticeably simpler. The drawing is on Calisphere from the UCLA S. Charles Lee Papers Collection.

UCLA has only 621 items online from the Lee collection. See the index page on Calisphere. The thousands of other drawings and plan sheets have to be viewed in person at the UCLA Charles E. Young Research Library. See the finding aid to the collection for an overview.


Seats: 800 was the initial capacity. All the seating was on the main floor with the exception of a small private box upstairs near the ladies lounge that sat about 8. Now with the addition of a stage and other changes the seating capacity is 474.

A pre-opening ad. This one appeared November 10, 1941. Thanks to Mike Rivest for locating it. Visit his site: Movie-Theatre.org

A 1947 ad. Thanks to Ken McIntyre for locating it for a post on the Photos of Los Angeles Facebook page.

Around 1952 the theatre was run for a year or so as a legit house by Nick and Edna Stewart as the first African-American operated theatre in Los Angeles. Nick Stewart, a veteran of the "Amos 'n Andy" show, was interested in showcasing actors in productions offering roles beyond the stereotypical ones available to African-American actors at the time.

Marvin Wright-Bey, the theatre's manager from 1995 until 2020, notes that Stewart's operation at the Crenshaw location had difficulties surviving in a neighborhood that at the time was overwhelmingly white and Asian. Stewart went on to greater success with his venture at the former Rimpau/Metro Theatre, 4720 W. Washington Blvd. The Stewarts renamed that house the Ebony Showcase Theatre.

The theatre had greater success in the late 50s and early 60s as the L.A. Jazz Concert Theatre. One attraction was after-hours sessions with top musicians in the area dropping in.
In the 1970s it was renamed the Kokusai Theatre and became an outlet for Japanese films. 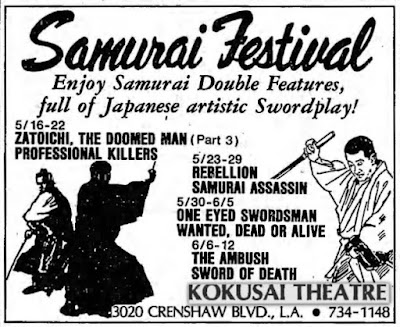 A Samurai Festival in 1986. It's an ad that ran May 16. Thanks to Gerald DeLuca for locating it for a post on Cinema Treasures.


Closing as a film house: The closing date is unknown. Gerald A. DeLuca notes that it was running as  late as July 1986.

Reuse as a church and for live events: The building had been purchased in 1985 by the West Angeles Church of God In Christ (westa.org), located just across the street. After the theatre closed as a film house the church began using it as the West Angeles Christian Arts Center and it housed the Spanish language branch of the church.

"After a few in-house productions I thought it wise to change the name to broaden our appeal to a larger community. We specialize in family oriented entertainment. With the increasing decline of performance houses in the surrounding communities, (the Vision Theatre, the Miracle Theater, the Ebony Showcase Theatre, Inner City Cultural Arts Center, Inglewood Playhouse) the West Angeles Performing Arts Theatre is now the oldest African-American, church owned and operated theater in Los Angeles, to my knowledge."

The theatre used to produce many of their own shows but later became a rental facility. The stage facilities were extremely limited. During Wright-Bey's tenure the stage was expanded and a new upper level created backstage to house dressing rooms and restroom facilities.

The projection booth became a lighting control location and the former cry room next to the ladies restroom was repurposed as a sound booth. The original layout was a men's room on the main floor and a ladies lounge and restroom upstairs. An additional ladies room was later added on the main floor.

The facility closed in 2020 as a result of the Covid restrictions.

Status: Since 2021 it's been available for lease or sale if you want to make an offer. In a May 2021 post about the theatre on the Los Angeles Historic Theatre Foundation Facebook page David Saffer commented:

"The thing to watch closely here is that West Angeles recently sold their land holdings north of Jefferson as they prepared for an expansion of their cathedral at Crenshaw and Exposition. So far nothing has been publicly released for this site but development has been announced for almost every piece of land surrounding it."


In 2022 LoopNet had a listing up for the property and noted that it would make fine creative office space. The new owner of the property is CIM Group. David Saffer notes that they have acquired numerous parcels along Crenshaw and in the West Adams neighborhood. They have a number of mixed-use projects in the works in these areas, including one just north of the theatre.
Lobby views: 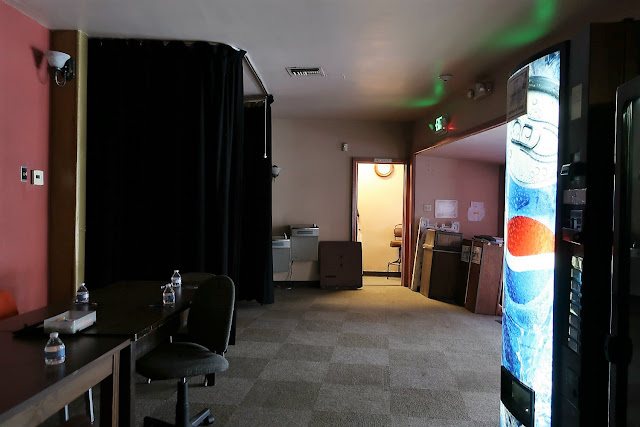 Looking toward house right in the lobby. Photo: Bill Counter - 2018 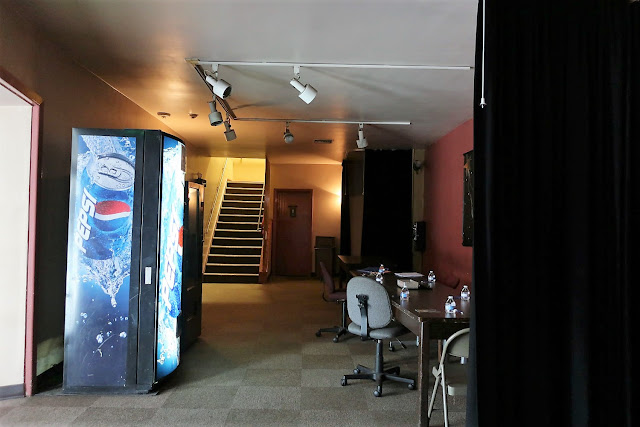 The lobby view toward house left. The table and chairs were there for a first reading of an upcoming play. Photo: Bill Counter - 2018 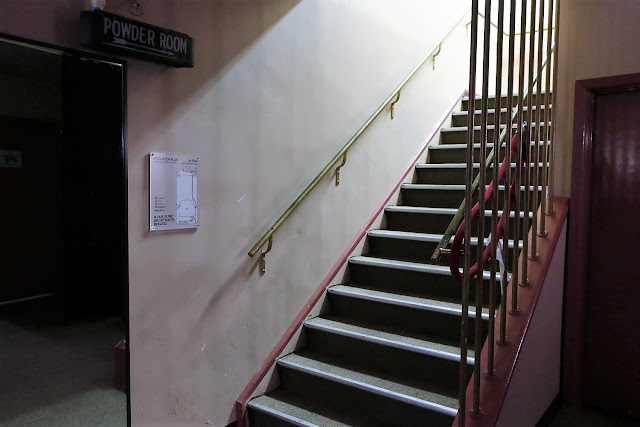 The stairs to the booth and original ladies room. Note the 1942 "Powder Room" sign in the upper left. Photo: Bill Counter - 2018 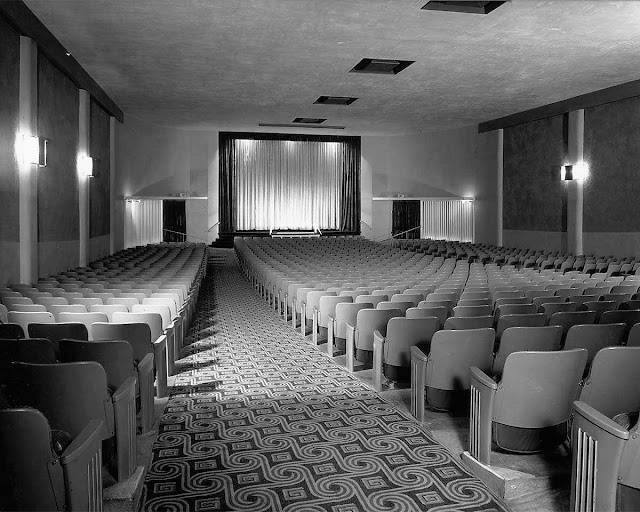 A look in from the rear of the auditorium in 1942. Photo: Julius Shulman - Getty Research Institute 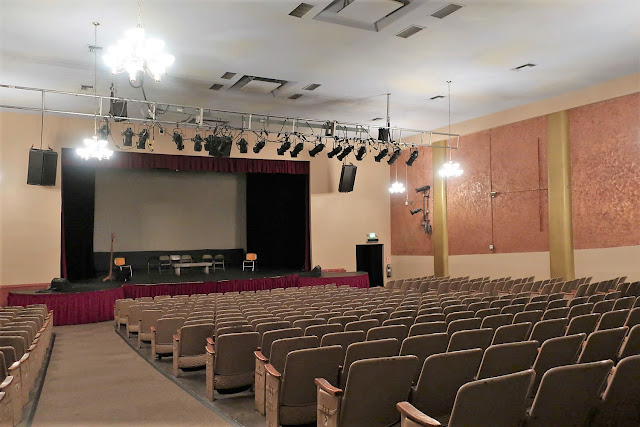 The view in from house left in 2018. Photo: Bill Counter 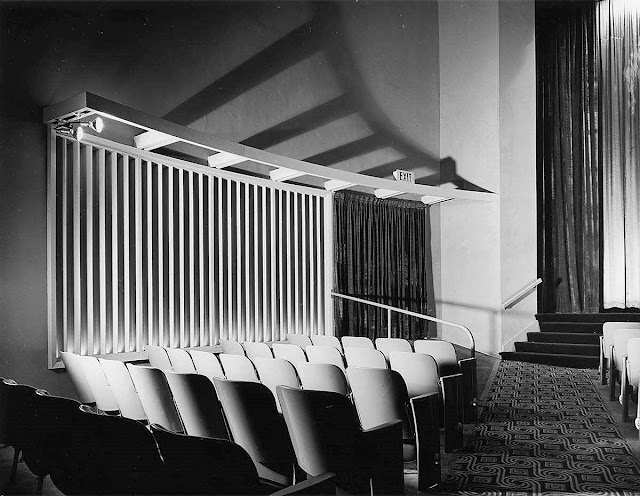 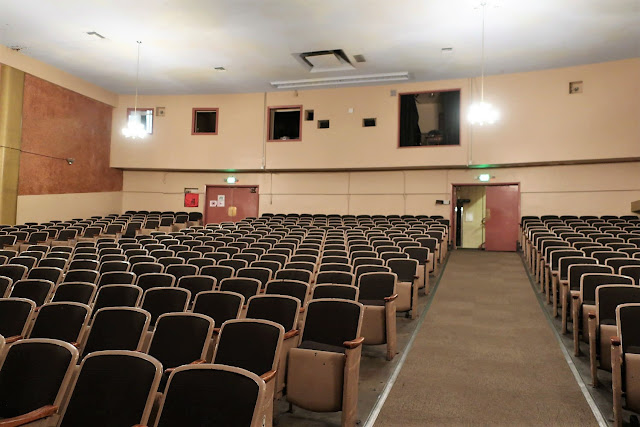 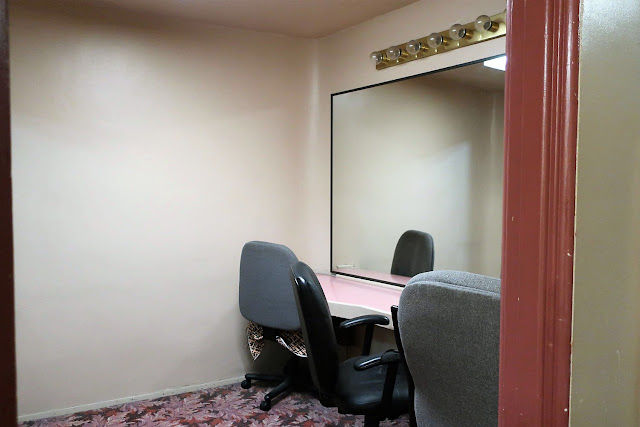 A peek into the ladies lounge. Photo: Bill Counter - 2018 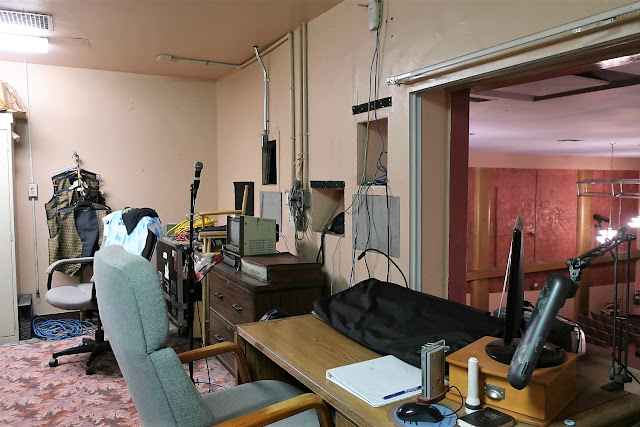 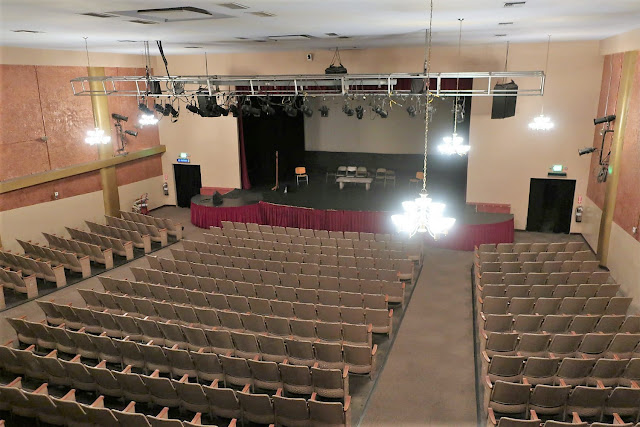 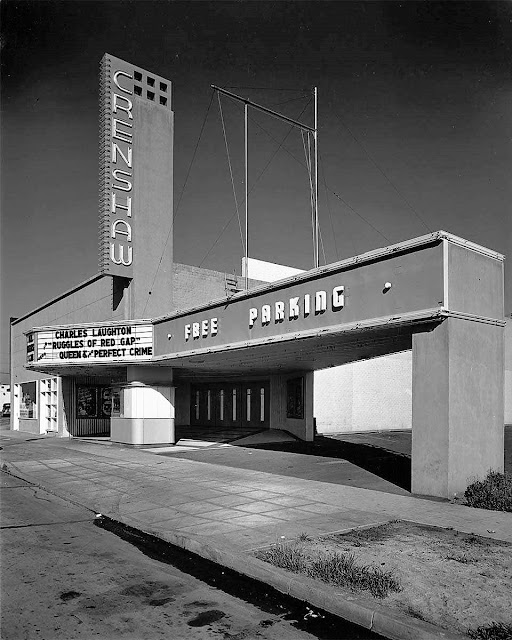 A 1942 view from the south. The Julius Shulman photo is in the collection of the Getty Research Institute. "Ruggles of Red Gap" dated from 1935. The co-feature, "Ellery Queen and the Perfect Crime," was a 1941 release.

Thanks to Noirish Los Angeles contributor Hoss C for finding the four Shulman photos in the Getty Research Institute collection. He featured them on his Noirish post #37138. See the Getty's home page for more about their collections. They have thousands of photos by Shulman, indexed by job number. See their Shulman search page to get started. 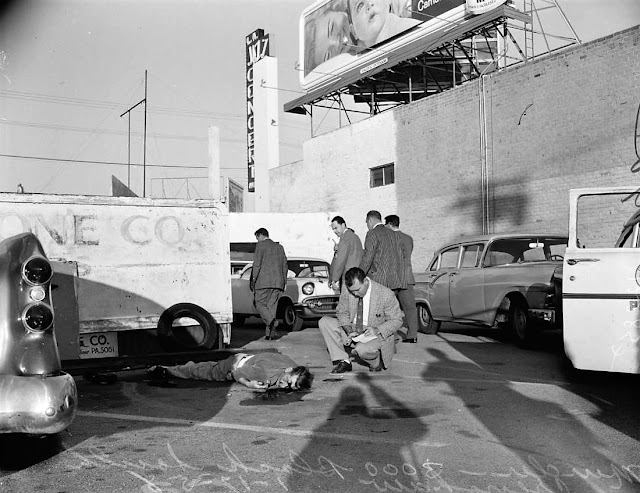 A little problem with a murder in the parking lot. Note the vertical sign reading L.A. Jazz Concert Theatre. It's a 1958 Los Angeles Examiner photo in the USC Digital Library collection. Thanks to Noirish Los Angeles contributor Gaylord Wilshire for finding the photo in the USC collection. His Noirish post #3262 also has several additional photos of the theatre. 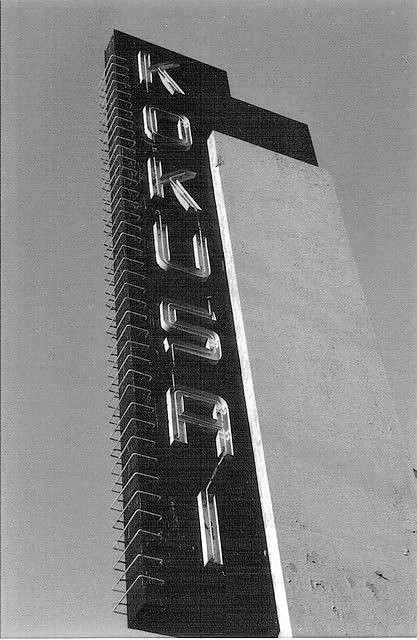 The theatre's vertical in the Kokusai days. Thanks to Bill Gabel for posting the photo on Cinema Treasures. 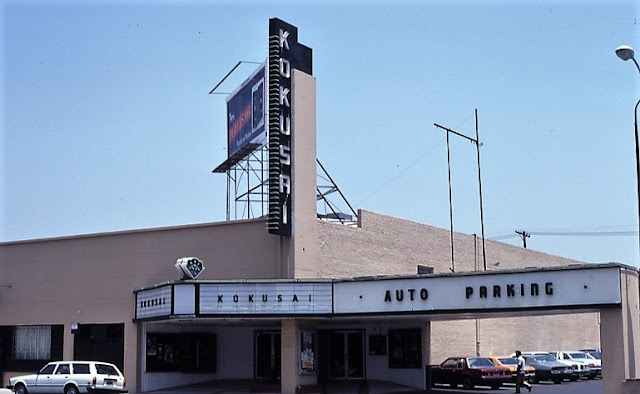 Thanks to the now-vanished American Classic Images website for this 80s view. 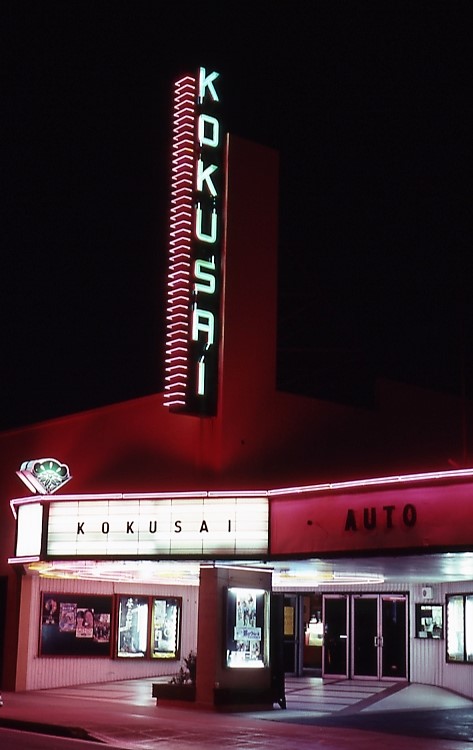 A 1983 look at the theatre when it was running as the Kokusai from the American Classic Images collection. 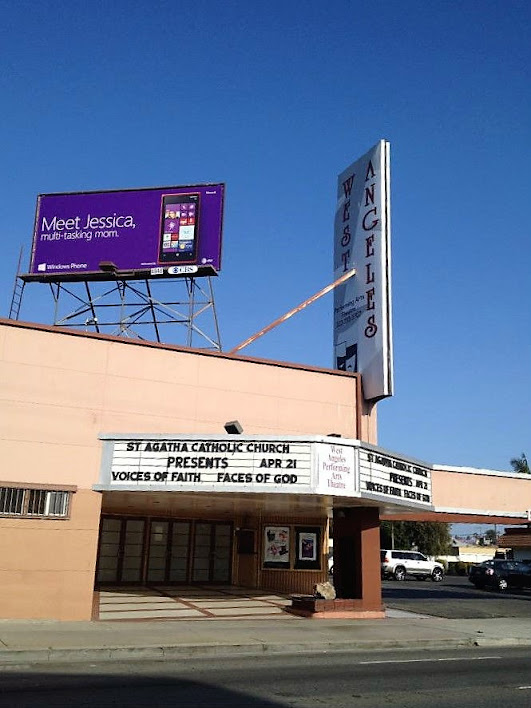 A c.2013 look at the entrance by Ken McIntyre. It was a post on the Photos of Los Angeles Facebook page.

The south side of the building. Photo: Bill Counter - 2018 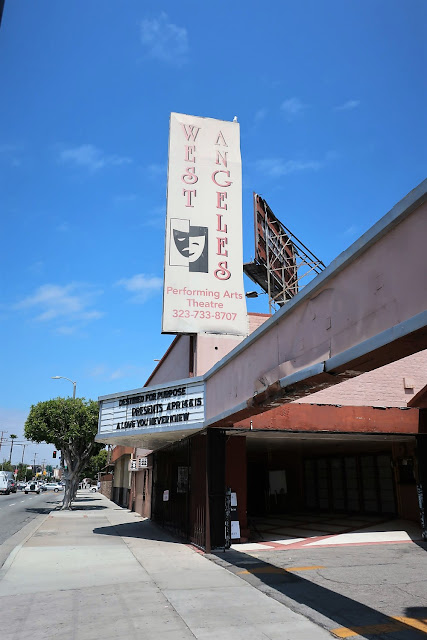 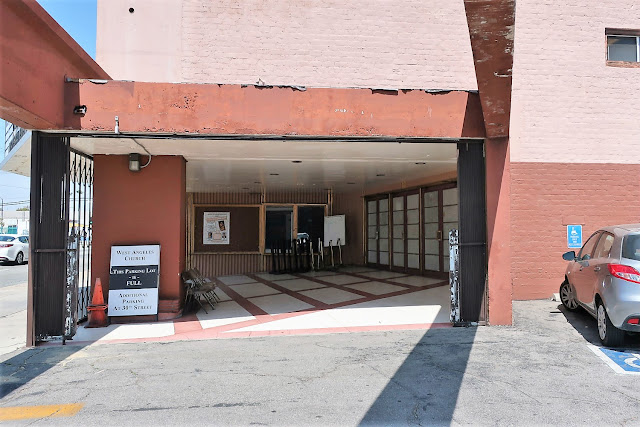 Looking in toward the entrance. Photo: Bill Counter - 2018 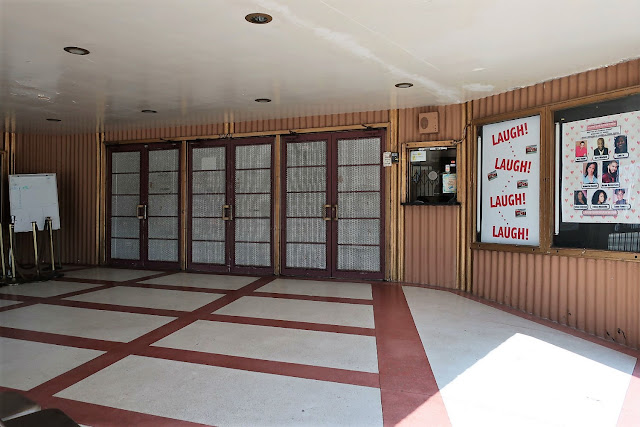 The theatre from across Crenshaw. Photo: Bill Counter - 2018 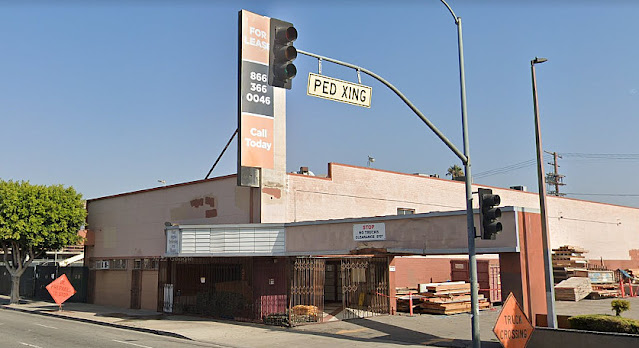 More Information: See the Cinema Treasures page on the theatre, which they list as the Kokusai. The Cinema Tour page offers three 2003 exterior views.