Opened: April 16, 1902 by Thomas Tally as the Electric Theatre, the first real movie theatre in Los Angeles. It was, like later nickelodeons, a storefront business built-out in a building that had other tenants and was not initially constructed with theatre use in mind. Yet, this was a leap. Unlike earlier exhibition sites, this was the first Los Angeles location devoted entirely to movies projected on a screen.

Several of Tally's earlier sites had run films on a screen, but they were improvised spaces in the back of stores that also offered movies in coin operated machines and sold phonographs and music. See the page devoted to Tally's Phonograph and Vitascope Parlors for some history of those earlier locations. This new site was on the east side of the street just north of 3rd. The Electric occupied just part of the building. There were tenants on either side as well as another business upstairs.

Tally moved in to 262 sometime in early 1902, evidently gathering all the merchandise and equipment from his then-closed phonograph parlor locations with the intent of having a big sale before opening the Electric. He's in the 1902 city directory as Tally's Phonograph Parlor. Maybe at the time the directory was compiled he hadn't decided yet what to do with the space. His neighbors in 1902 were American Tailoring at 260 and Uri Citron, in the clothing business at 264.

A March 29, 1902 ad in the Times by Thomas Tally offering all his surplus equipment.

A Times ad for opening day, April 16, 1902. Terry Ramsaye, in his 1926 book "A Million and One Nights, a History of the Motion Picture," discusses the Electric on page 425 and includes the copy from this ad. He adds: "This is the way that Thomas L. Tally informed Los Angeles that the motion picture was making its debut as an independent entertainer. He saw that its destiny was not locked up in the peep show machines in his phonograph parlor."

An April 17, 1902 ad in the Times the day after the opening announcing the addition of children's matinees every day at 2:30. While this was plainly advertised as a theatre, the ads didn't run with the other legitimate and vaudeville theatres. Tally was relegated to an "Amusements and Entertainments" category below.

An April 19 Times ad. You can see what sort of competition Tally was grouped with in the Amusements section. As far as movies: none. Nobody else in town was advertising films at this time. Note the use of the word "Vaudeville." Terry Ramsaye calls our attention to "that improvement in nomenclature calculated to make the public understand better what it was all about." Thanks to Jeff Bridges for spotting this particular ad.

A May 10, 1902  L.A. Times ad located by Mary Mallory. Don't miss her exhaustive research on Thomas Tally's career in two articles on the site The Daily Mirror: "T.L. Tally - L.A.'s Pioneer Film Exhibitor, Part 1" and "T.L.Tally... Part 2." She has discussed this particular ad in comments on the Photos of Los Angeles and LAHTF Facebook pages.

Another ad located by Mary in the June 17, 1903 issue of the Times advertised the first L.A. showings of the Melies film "A Trip to the Moon" at the Electric. Thanks, Mary!

Adding vaudeville as the Lyric: Evidently the movie business wasn't wonderful (perhaps due to lack of product) and Tally closed the theatre in June 1903. He reopened it July 18, 1903 as a vaudeville house called the Lyric Theatre, where he also continued to exhibit films as part of the program. The theatre was still listed as the Electric in the 1903 city directory.

A July 16, 1903 ad in the Times announcing the reopening as the Lyric with vaudeville to share the bill with films. Thanks to Jeff Bridges for locating the ad.

Under the heading "Clever Moving Pictures" a show at the Lyric got a long review in the October 11, 1903 issue of the Times: "A set of moving pictures called 'Fairyland,' shown at the Lyric Theater in this city now, is an interesting exhibit of the limits to which moving picture-making can be carried in the hands of experts equipped with time and money to carry out their devices...T.L. Tally, manager of the Lyric, claims to have the only film of its kind in the West."  Thanks to Jeff Bridges for finding the article.

Terry Ramsaye notes in "A Million and One Nights" that when Edison's film "The Great Train Robbery" came along "Tally was so filled with enthusiasm at its success that he sold his theatre and took to the road, showing the exciting one reel super feature of 1903 all over the west. He later returned to Los Angeles and resumed the operation of motion picture theatres."  The film was released in December 1903.

Later operators: The theatre is listed (but with "Main St." as the only address) in the 1907-1908 edition of Henry's Official Western Theatrical Guide as the Lyric under the management of Wm. Orvitt. The publication is on Google Books.

The theatre was listed as the Lyric in the 1905 through 1908 city directories. In 1909 the city directory listing was for Southwest Amusement Co. Southwest was actually dissolving in 1908 with their properties unloaded on other operators, usually resulting in a name change. Scroll down to the bottom of the Cameo Theatre page for more about Billy Clune and C.M. Bockoven's Southwest Amusement.

By 1910 it was known as Glockner's Automatic Theater with a city directory listing as the Automatic Theatre. William Glockner was the operator. The 1911 and 1912 city directories list it as "W L Glockner." The automatic bit usually meant you just bought your ticket from the cashier and went in. No ticket taker. Also no usherettte to show you to your seat.

Joe Vogel found an item about Glockner in the March 9, 1918 issue of The Music Trade Review: "The Wm. L. Glockner Music Co., the local Wurlitzer representative, reports the placing recently of a Style H Wurlitzer Orchestra in the Hidalgo Motion Picture Theatre, on North Main Street." In his comment appearing on the Cinema Treasures page about the Hidalgo Theatre Joe asks: "I wonder if this was the same Glockner who operated Glockner’s Automatic Theatre?"

Closing: The date is unknown. Glockner's was still in business after the Liberty opened next door at 266 S. Main in 1911, but not for long. 1912 was the last city directory listing.

Status: The building survived long after the theatre closed. It was still around in 1949 with the Veteran's Hotel on the 2nd floor and retail downstairs. The demolition date is unknown. A parking garage for the LAPD Motor Pool is now on the site. 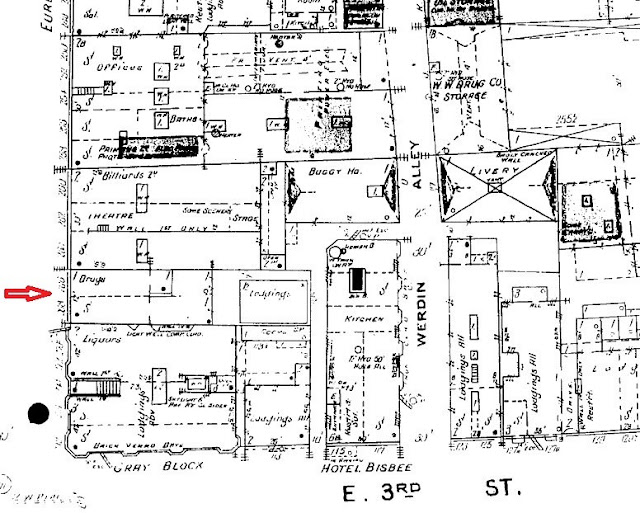 A 1906 Sanborn insurance map showing the theatre, about halfway up on the left, at 262. Note it only occupies a third of the building width and has a stage indicated at the end of the space. Here in 1906 there was a billiard hall on the 2nd floor. Thanks to Jeff Bridges for sharing the map on Flickr. The red arrow indicates the building just south of the Electric that would be demolished in 1910 for construction of the Liberty Theatre. 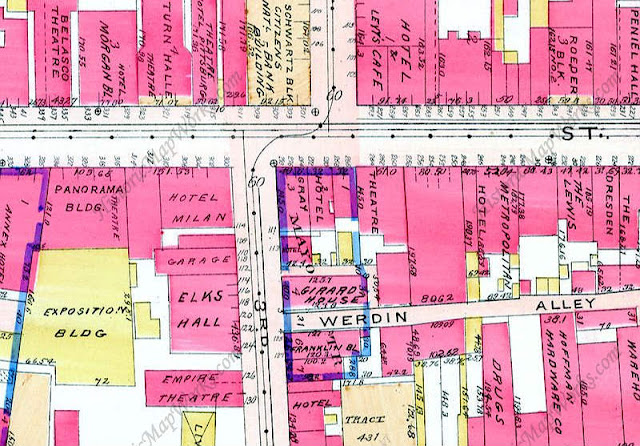 This detail from plate 002 of the 1910 Baist Real Estate Survey from Historic Map Works shows the Electric / Lyric / Glockner's as just "Theatre" near the northeast corner of 3rd and Main. It was actually in the middle storefront of the 260-262-264 building, although the map doesn't show it that way. The stairs going to the 2nd floor were also squeezed in there in the middle of the building.

The Liberty at 266 hadn't arrived yet. Note the Empire theatre around the corner on 3rd and the Panorama Building in the 300 block of S. Main. It would later be the site of the Hippodrome Theatre. The jog on 3rd would be smoothed out c.1930. 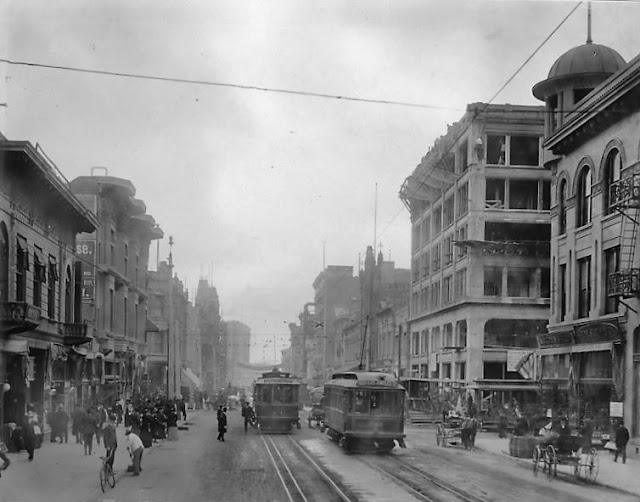 The Lyric Theatre's building is on the left in this c.1906 C.C. Pierce photo from the California State Library collection. We're looking south toward 3rd St.  On the right across third they're finishing up the Citizen's Bank Building. The tall facade down a half block on the right is the Turner Hall, aka the Regal Theatre. 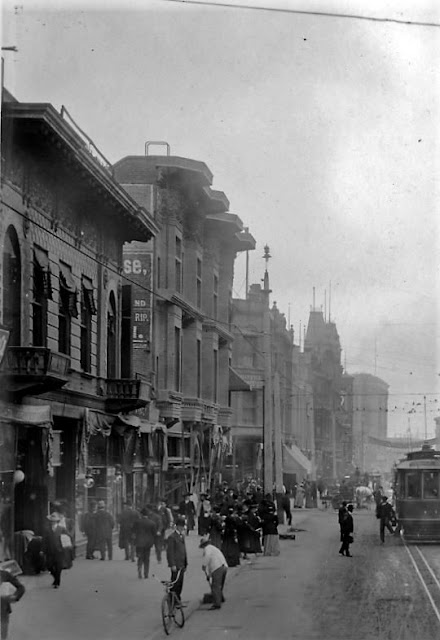 A detail from the C.C. Pierce photo. The entrance to the Lyric is the second storefront on the left. It appears there's a sign ringed with electric lamps. 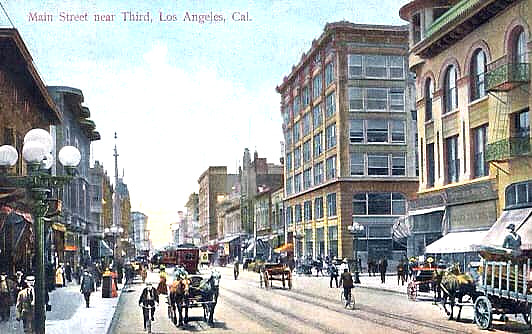 A c.1907 postcard with the theatre's building on the far left and the Gray Hotel beyond. Thanks to Ken McIntyre for finding the card for a post on the Photos of Los Angeles Facebook page. Joe Vogel comments:

"Building with the turret far right is the Moose Lodge, across 3rd Street is the Citizens Bank Building, down the block with the tall fancy front is the Turner Hall, aka Regal Theatre, and the boxy building down at the corner of 4th would be the Van Nuys Hotel. Across Main from the Van Nuys you can see the corner tower of the Westminster Hotel. That looks like the San Fernando Building (1906) on the other side of 4th Street. In the foreground at left you can see the bay windows of the 3-story Gray Hotel, 3rd and Main, and across 3rd Street the very similar Milan Hotel. I'd date this photo to around 1907." 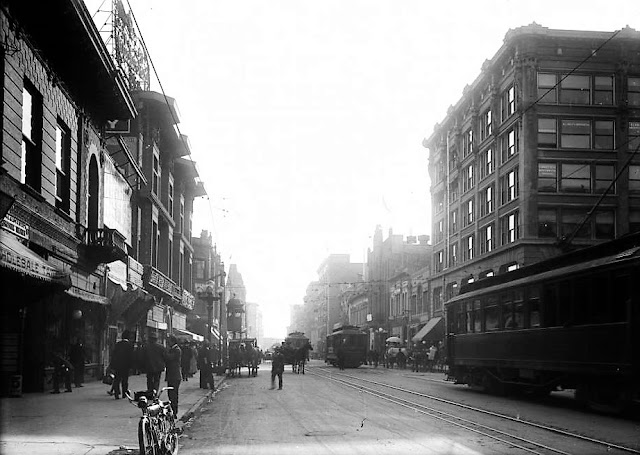 A sign for Glockner's Automatic Theatre shows up on the left of this c.1910 view looking south toward 3rd. The sliver of a building just beyond Glockner's would soon be demolished for the Liberty Theatre. Beyond that, we see the Gray Hotel building on the NE corner of 3rd & Main. The California Historical Society photo appears on the USC Digital Library website. 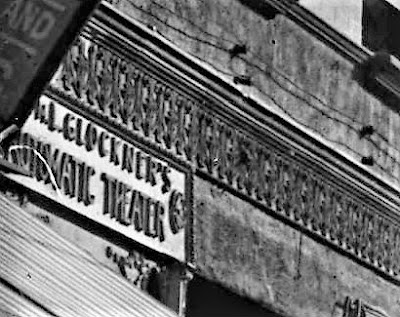 A detail of the Glockner's sign from the California Historical Society photo. 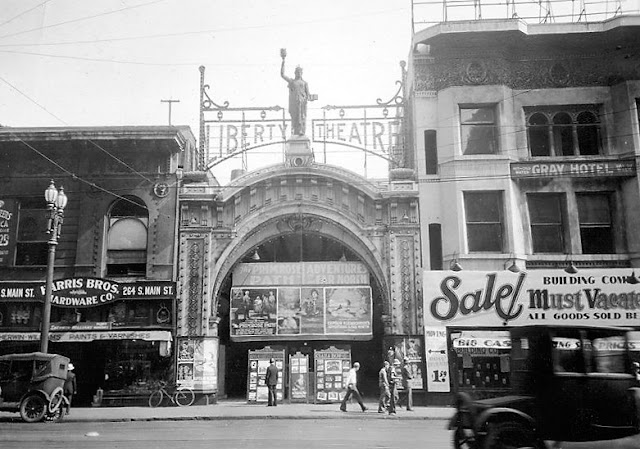 The Electric/Lyric/Glockner's Theatre was once in the Harris Hardware building seen at the left of this terrific September 24, 1929 photo from the City of Los Angeles Engineering Department on the Los Angeles City Historical Society website. Thanks to Noirish Los Angeles contributor Fred H, who included the photo in his Noirish post #23527. And thanks also to ace theatre photographer Hunter Kerhart for spotting the post.

By the time of the photo the theatre had been long gone from the building. The Liberty Theatre, 266 S. Main, at the center, and the Gray Hotel, on the right, were both doomed at the time of the photo. The hotel and most of the Liberty's building were soon demolished to extend 3rd St. to eliminate a jog. 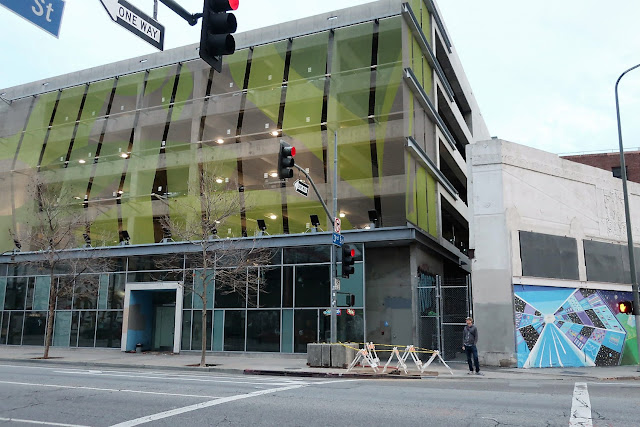 That doorway in the LAPD garage building is about where the entrance to the Electric was. On the right it's the triangular remnant of what had been the Liberty Theatre. 3rd St. is out of the frame to the right. Photo: Bill Counter - 2019

More Information: See the Tally's Phonograph and Vitascope Parlors page for Tally's film adventures before the Electric. Scroll down to the bottom of the Tally's Broadway page for a listing of his later exhibition adventures. Tally died in 1945.

Cinema Treasures has page on the theatre, which they list as Glockner's Automatic Theatre. Also see the Cinema Treasures page on what they're calling Tally's Electric at 311 S. Spring St. for many comments about this Main St. location. See "Inventing Entertainment" on the Library of Congress website for more about the Vitascope and the Edison Company's early film efforts.

The University of California Press 1991 book by Charles Musser "Before The Nickelodeon - Edwin S. Porter and the Edison Manufacturing Company" (online in its entirety) has a wealth of data and photos. Wikipedia has an article on Thomas Tally.

The other Electric: The Roosevelt Theatre at 212-14 N. Main was known in its early years as the Electric.