Opened: Most likely in the fall of 1917. The theatre, a project of Frank A. Grant, was located on the west side of the street between 2nd and 3rd. This item appeared in the May 26, 1917 issue of Southwest Contractor and Manufacturer under the heading "Building Contracts Recorded":
"Brick Theater -- Frank A. Grant, own; Chas F. Durr Co, des, San Pedro; J. B. Lilly and P. B. Fletcher (Lilly-Fletcher Co), contrs, 621 Investment Building; in 60 working days from May 24; all labor and material for 1-sto and part 2-sto brick theater, store and office building, 125x50 ft. lot 4, Western Place (221 S Western Ave); $14,800; payable: $2250 foundation completed, rough lumber on ground and released, $2250 walls scaffold high, $2250 walls ready for trusses, $2250 roof on, $2250 completed, $3525 35 days after. No bond attached. Dated Apr 30, filed with plans and specifications May 24."
Thanks to Joe Vogel for the research. The page with the item can be seen on Google Books. Joe adds:
"Completion of the project was noted in the 'Notices of Completion Recorded August 2' column of the August 10 issue of Southwest Builder & Contractor. Depending on how long it took them to complete interior work and outfit the house, the Windsor likely opened in the fall of 1917."
Architect: From the mention in the May 26, 1917 issue of Southwest Contractor and Manufacturer, one can assume that the building was designed by the Charles F. Durr Co. of San Pedro.

Thanks to Ken McIntyre for locating this ad in the January 16, 1918 issue of the L.A. Evening Express. It was a post on the Photos of Los Angeles Facebook page of a larger column of ads from the paper. 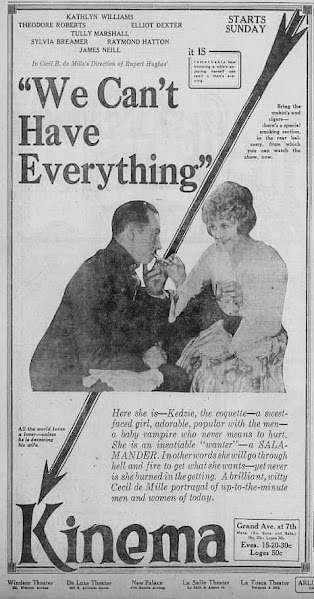 A 1918 ad for "We Can't Have Everything" at the Kinema, a downtown house later known as the Criterion.

The fine print at the bottom of the ad notes that the film was also playing at the Windsor. Thanks to Ken McIntyre for locating this for a Photos of Los Angeles post.
The Windsor got listed in the 1918 city directory. In the 1919 directory it's listed at 221 S. Windsor Ave., a typo. In 1920 it was used on Sundays by the Wilshire Presbyterian Church while they were constructing a new building. 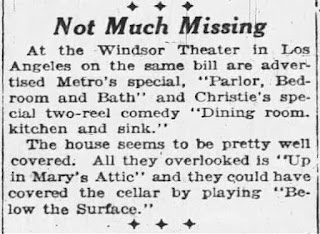 A 1921 trade magazine item about a booking at the Windsor that was spotted by Ken McIntyre.

It's possible that owner Frank Grant had a short-lived deal with A.J. Sanborn to operate the theatre. Joe Vogel comments:

"Also interesting: A Pacific Coast Architecture Database page for the Rivoli Theatre in Los Angeles cites the 7/1/1921 issue of Southwest Builder and includes their line 'A.J. Sanborn, % Windsor Theatre; Lilly-Fletcher, contractors..." (I think the % is supposed to be c/o, but the optical character reader messed it up, as they do.) Anyway, it looks like by 1921 the Windsor was part of Arthur Sanborn's growing chain of theatres."

The Rivoli Theatre, at 4521 S. Western, was a house that Sanborn had built with Grant as a partner.  Lilly-Fletcher was also the contractor for that one. Also in on the deal were J. Leslie Swope and John M. Young, two of Grant's partners in the new firm Hollywood Theatres, Inc. It appears that soon Sanborn was off with his own circuit and Grant, Swope and Young went their own way, focusing on Hollywood.
In the 1921 and 1922 directories the Windsor's address is shown as 219 S. Western Ave. In the 1921 city directory there's also a listing under theatres for "Grant Bros." at the same address. There seems to be no listing for it in 1923. 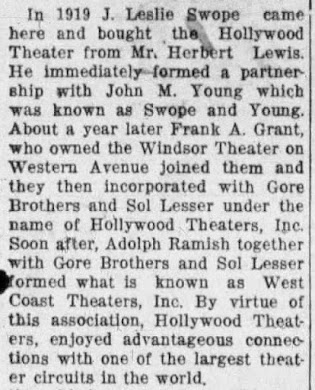 We get a nice origin story of Hollywood Theatres, Inc. in this excerpt from a 1924 article that appeared in the Hollywood Citizen. Thanks to Ken McIntyre for locating it for a thread about the Windsor on the Photos of Los Angeles Facebook page.

Closing: The date is unknown. Presumably sometime before 1927.

The Windsor doesn't appear in a 1927 ad for Hollywood Theatres, Inc. By 1927 the firm was running the Hollywood, the Carmel, the Granada (later called the Oriental), the Paramount (later known as the Loma), the La Mirada (soon rebranded as the Filmarte) and the Apollo (which finished its days as the Star).

Status: The building the Windsor Theatre was in has been demolished.

More Information: Sorry, there isn't any yet.